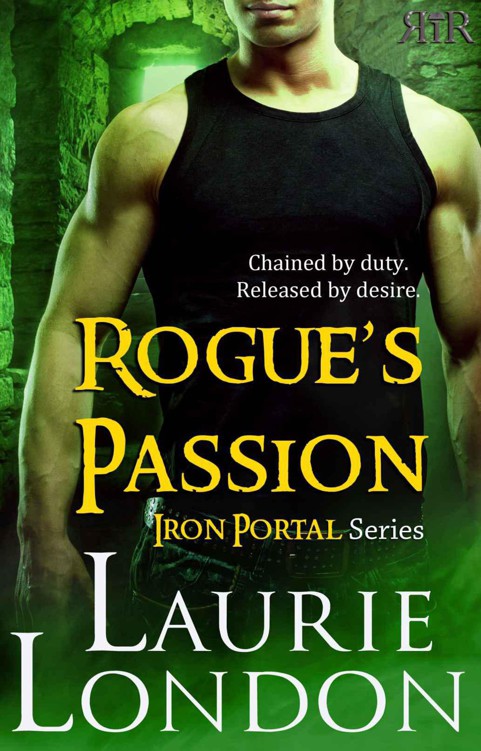 Hidden within the rugged mountains of the Pacific Northwest, Iron Portals separate the modern and ancient worlds. Only a chosen few, Warriors of the Iron Guild, know their locations.

For years, Olivia Crawford has kept a low profile in order keep her para-ability a secret. If the army finds out she’s a Healer-Talent, they’ll force her to work for them—just like her twin brother who was taken as a boy and never seen again. When a terrible explosion rocks New Seattle, she risks everything to save the injured, including a handsome stranger with secrets of his own.

Blaming himself for the death of a friend, Iron Guild warrior Asher Kane vows to bring those responsible to justice. After being hurt on a mission and nursed back to health by a beautiful yet mysterious woman, this no-strings-attached bad-boy finds himself falling for her…even as he struggles to stay away.

Edited by Moonshell Books and Editorial

This book is a work of fiction. The names, characters, places and incidents are products of the author’s imagination or have been used fictitiously and are not to be construed as real. Any resemblance to persons, living or dead, actual events, locales or organizations is entirely coincidental.

The uploading, scanning and distribution of this book in any form or by any means—including but not limited to electronic, mechanical, photocopying, recording or otherwise—without the permission of the copyright holder is illegal and punishable by law. Please purchase only authorized editions of this work, and do not participate in or encourage electronic piracy of copyrighted materials. Your support of the author’s rights is appreciated.

To Janna and Mandy.

“Asher, hold up,” Toryn whispered through clenched teeth. “You can’t do this. You know you’re not—”

His friend’s words faded behind him as Asher Kane jumped off the fire escape, landing on the wet pavement like a wild animal ready to pounce.

The man in the dingy alley sputtered and staggered backwards.

Asher lunged and grabbed him by the collar, shoving him against the brick wall and toppling a few empty garbage cans in the process.

The bloke had a thin mustache, dark, greasy hair, and breath that smelled like cigarettes and cheap whiskey. A squirrelly sonofabitch, all right. Just like Fallon had described. Couldn’t weigh more than eight or nine stone, he thought, as he jammed his forearm against the guy’s windpipe.

“Don’t hurt me,” the man choked. “I swear I don’t have any money. Check my pockets if you don’t believe me.”

“Then what
do
you want?”

For my friend to be alive.
“Information. You have it. I want it.”

The man’s beady eyes brightened like a rat’s at the smell of peanut butter. “It’ll cost you.”

Asher laughed bitterly and shoved him again. The guy was either greedy or stupid. Or both. “You’re not in a position to bargain with anything other than your life.”

“I’ve got friends, you know. Guys who will beat the shit out of you if something happens to me.”

“Is that right?” He opened his motorcycle jacket, exposing a few of the weapons strapped to his body. “Well, guess what? I knew someone with a friend like that. And that someone is dead now, thanks to you.” He leaned in close, trying not to inhale. “Although when something happens to one of
my
best mates, I prefer killing the one responsible rather than simply beating the shit out of him.”

With his free hand, Asher pulled out a razor-sharp dagger and held it up. The blade flashed in the dim light from the streetlamp at the end of the alley, and the guy’s eyes went full-moon wide. Struggling to get free, he made a high-pitched mewling sound.

People always went a little crazy when they saw the knife. Like many warriors of the Iron Guild, Asher favored weapons made from cold-forged Balkirk steel. It was said they held the memories of those whose blood they had spilled, making them even more fearsome to the enemy. He’d been sicker than a dog after he brought the thing through the portal, but it was moments like these that made it all worthwhile.

“What the fuck, dude?” The man’s bulging eyes darted left and right as if he were looking for support in the empty alleyway. He wasn’t going to get it, however. Asher and Toryn had followed him for a while to make sure he was completely alone. “I didn’t kill anyone.”

“Word is,
you
turned my friend over to the army. And they killed him.” Asher’s tone was as deadly as the edge of his blade.

“Dude, I have no idea who or what you’re talking about. I think you have the wrong man.” The tip of the guy’s tongue darted out and ran nervously along the bottom edge of his mustache.

The distant wail of sirens pierced the night air. Asher glanced to where his dog, a deerhound named Conry, was standing guard at the mouth of the alley.
If
the authorities were coming here, they were still a ways off.

“Come on,” Toryn said from behind. “Let’s go. The bloke doesn’t know anything. Look, he just pissed his knickers.”

Asher ignored his friend’s plea, although he did smell the urine. He’d thought it was the natural aroma of the alley mixed with the smell of beer and rotting garbage. It better not have fucked up his boots. He’d won them fair and square down at Reckless Motor Sports, his home away from home on this side of the portal. The former owner of the lug-soled ass kickers had not been happy, but that was too damn bad. They fit his feet as though they’d been custom made by one of the cobblers back home.

“Need me to refresh your memory?” Asher asked. “Not long ago you met a guy you suspected was from Cascadia, so you turned him in. And for what? A couple of bucks?” Asher poked the tip of the blade upward into the soft spot under the guy’s chin. Nothing like a little gentle persuasion to get a bloke talking.

“Okay, okay,” the man said, standing on his toes and cranking his chin up in an attempt to get away from the blade. “I’m not saying I did or didn’t, but the army does offer rewards.”

“So you
have
turned people in?” His fingers itched to push the blade again. How many of his people had died because of this guy?

“What was I supposed to do? Let someone else get the money? I’ve got an ex-wife and three kids to support, and they ain’t cheap.”

“And it was easy money to offer up a guy for the army to kill.”

“Kill? What are you talking about? They interrogate them. You know, find out what targets they’re planning on bombing next.”

Asher and Toryn both bristled. The Pacifican army liked to spread the rumor that Cascadians were responsible for terrorist activities in New Seattle, but it wasn’t true. Iron Guild warriors did not kill innocent people. They only killed army soldiers searching for portal locations into Cascadia.

“They did interrogate him,” Asher replied. “Right before they forced him to take weapons through the Iron Portal to be used against my people. He died from iron sickness on the other side.”

“That’s too bad,” the man said flatly. His utter lack of conviction made Asher seethe with anger. “But how do you know it was me? Most people I know wouldn’t hesitate to turn in a Cascadian.”

“How stupid do you think I am? You’re Eddie, right? And—” He twisted the guy’s arm, making him howl in agony. “You’ve got a broken wrist that hasn’t healed yet, right?”

“Fuckin’ A.” The guy jerked his arm away.

“My friend wasn’t quite dead when I found him.”

Asher tried to keep the memory of Fallon curled up on the cold floor of the antechamber out of his head, but it was no use. After Fallon hadn’t shown up at the rendezvous point, he’d known something was wrong, so he stepped through the portal and that’s when he found him. He’d held his friend’s hand as he slowly died. Having suffered minor bouts of iron sickness himself, he knew Fallon was in terrible pain, but there was nothing he could do about it. He’d felt so helpless.

“He told me he broke your arm, when he realized it was a setup. So you do the math. Chances are, I’d say you’re exactly the person I’m looking for.”

The guy’s mustache twitched and resignation dawned in his expression. “So what if I am? What are you going to do about it?”

Asher counted to three under his breath in an attempt to keep his anger in check. At least for a few more minutes. “Who’s your army contact?”

In one motion, Asher sliced through the buttons on the man’s shirt, exposing a hairy chest ready to be splayed open.

“Eeaahh! Hold on. I…I remember. They call him the Fixer. Hangs out at the Apocalypse Tonight Club. He’s one scary motherfucker, though. Half his face is scarred.”

The sirens were louder. Someone in this crappy neighborhood
had
called the Night Patrol.

Toryn cleared his throat. “Hey, man, we got to go.”

Asher twisted the knife point. Just one little shove was all it would take.

“Please, mister.” The guy’s voice went all high-pitched and whiny again. “I didn’t know they were going to kill him. I swear. You gotta believe me. Like I said, I got kids who depend on me.”

Asher’s conscience began to kick in. If he did what he wanted to do and wasted this bloke, he’d leave some kids fatherless.

What poor luck to have this weasel as a father. But would it be worse if the guy died? And where would that leave the ex-wife? She probably had the kids—he couldn’t imagine this loser being responsible enough to have custody. Asher’s life was definitely worse because his father had died and his mother had remarried. His father, a former Iron Guild warrior, hadn’t been perfect, but his stepfather had turned out to be the asshole of all assholes.

As much as he’d love to drive this thing home now, he just couldn’t. He’d killed many men, and some were probably fathers. But that was in battle and they were soldiers.

“If your name comes up or I even hear you mentioning Cascadia again, you’re going to wish I’d ended your life today. The agony I’ll put you through will make your broken wrist feel like a fucking splinter.”

Fine. He had what he’d come for. He’d save his wrath for the scar-faced army sonofabitch.

Asher gave the guy one last shove, then he and Toryn sprinted down the alley toward Conry. They hadn’t gone more than a few steps when gunshots rang out, hitting the nearby garbage cans.

He dove behind a Dumpster. “What the fuck?”

“That little shit,” Toryn said, scrambling after him. “Didn’t you check him for weapons?”

In his haste to find out what had happened to Fallon, he hadn’t thought about it. He pulled out his crossbow and peered around the corner. The asshole was fumbling with the clip on his gun. Asher took aim and released an arrow. It caught the guy in the throat, dropping him to his knees.