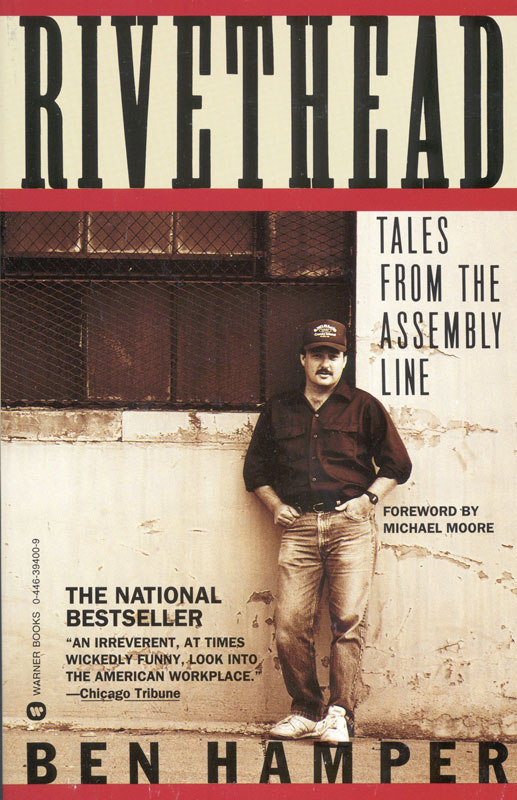 Portions of this book originally appeared in a different form in
The Michigan Voice, The Detroit Free Press

The “Warner Books” name and logo are trademarks of Hachette Book Group, Inc.

PRAISE FOR BEN HAMPER AND RIVETHEAD

“The auto worker's authentic voice, excesses and all…does what
Roger & Me
was unable to do—get into the plant and show, in perceptive often side-splitting, sometimes appalling fashion, what it was like to build trucks for GM.”

“An authoritative voice, rarely heard, but with a compelling urgent message about industrial America.”

“Iconoclastic…irreverent eloquence.…Hamper wields distinctive, entertaining prose like a latter-day Lord Byron with a rivet gun in one hand and a six-pack in the other.”

“Compelling.…A powerful book that often reads like the biting poetry of Charles Bukowski…
Rivethead
is far more than one man's musings on life in an auto plant. It is about class, the working class, and the lives led by the American men and women who manufacture the things we buy.”

“This ‘shoprat’ writes with the pedal to the metal…a keen, floor-level eye for the absurdities of an American industrial giant.”

“Tough and knowing…a powerful writer; his eye misses nothing.”

“In-your-face invective.…Hamper's writing is strong, lively, and as corrosively funny as a whoopee cushion filled with acid.”

“An eye-opening, bitterly humorous account of one man's life on the factory floor.…Highly entertaining.…Savagely funny.”

“Hamper writes with unrelenting energy.…A voice as powerful as the riveting gun he wielded.”

“A hell of a book.…Just may be the best insider's view ever written about factory work in America.”

“Ben Hamper is a modern worker writer, proletarian journalist and one of the best writers I know about.”

“An American original.…A new writing talent has come from the ranks of blue collar.”

“A blue collar Tom Wolfe.…Hamper's book is the best description of who American autoworkers were, and what they thought, in the 1980s. People who never thought about where their cars come from will find out—and enjoy doing it.”

“Right out there on the cutting edge…Hamper is a marvelous writer.”

—Jim Harrison, author of
Legends of the Fall

“Hamper recounts his experiences with true comic flair. His humor covers the whole gamut of comedy, from sarcasm to farce to the surreal.”

SHOP RAT THROTTLES THE SENSES:
The Rivethead on
Rivethead

“Let's talk
Rivethead,
arguably the greatest book released in our lifetime. I found the book to be an enormously amusing read. I laughed. I cried. I learned. I got naked and performed cartwheels for my repulsed neighbors. Dang, I even got a whack out of Michael Moore's smarmy foreword. What a ham!

“My advice is as follows. If you enjoy a book with a savage heart and a powerful sense of prose that throttles instead of coddles, you should immediately spring for about a dozen of the hardcovers.

“Rivethead
is like nothing else that's gone before. It will surely rankle some and delight others. Corners will spar and controversy will fester in its wake.

“No matter. What is important is that this snaking journey through the madness and monotony of assembly labor will provide a keen insight for all who have ever expressed even a marginal curiosity in undistorted blue-collar realism.

“I'll even go on record as saying this is the best book I have read this year. I wouldn't lie to you. Furthermore, I COULDN'T lie to you.

“It's the only book I've read this year.”

—from Ben Hamper's review in the
Flint Journal

Although the tales you are about to read are, to the best of my recollection, true, the names of several individuals have been changed to preserve the anonymity of the innocent and to protect the guilty.

M
Y RELATIONSHIP WITH
B
EN
H
AMPER HAS RESULTED IN MY BE
ing fired from my job, sued for libel, losing a potential friendship with my hero Bruce Springsteen, and now forced into writing this damn foreword so I can keep my favorite ball cap. Which is actually Hamper's favorite ball cap, but now that half the world has seen it on my head in
Roger & Me,
and, possession being so many tenths of the law, we decided to settle this with my keeping the hat if I wrote this foreword.

Let me back up for a second…

I first heard of Ben Hamper shortly after John Lennon was murdered. A columnist in the
Flint Journal,
the daily rag in our hometown of Flint, Michigan, wrote that the country was actually better off with Lennon dead, considering all of the rebellion he caused. If it wasn't for Lennon and the Beatles, she exhorted, our generation would have turned out more respectable people who held such jobs as engineers or lawyers. So this guy named Hamper sent a letter to the
Flint Journal
saying, “I make my living turning bolts in the factory. Being a devoted Lennon fan, I'm suddenly discouraged to realize that, had I avoided this scoundrel's music, I could have been a real success in some lofty vocation.”

I thought about trying to find this “Ben Hamper” to see if he would like to write for my alternative biweekly newspaper, the
Flint Voice.
But that idea got shoved aside, and it was another six months before an unsolicited record review from Ben arrived in the mail with a note attached saying I could run this if I wanted to. This one-paragraph review was so wonderfully sick that I immediately called him up to discuss further writing assignments.

After a few more reviews for the
Flint Voice,
it was clear from his writing that there was more inside him that needed to come out. I asked him to consider writing a column about life in the shop—or any other subject of his choosing. So in addition to reports from the General Motors assembly line, he covered the local Elvis impersonators, faith healers and greasy spoons. It was right about then I should have pulled the reins in on this guy, but he was upsetting so many people, I just couldn't stop him.

Then one week, Hamper wrote about a bar he frequented where there were so many fistfights, he suggested a smart dentist should open an office next door to the joint. “What the place lacked in ambience,” he wrote, “it made up for in ambulance.” Well, the bar soon closed and the owner sued me, claiming that Hamper's remarks had ruined his business. Fortunately, the judge had been my Boy Scout advisor and firmly believed, with God as his witness, that I could do no wrong, and dismissed the suit.

Hamper's “Impressions of a Rivethead” column became the most widely read page in the
Flint Voice
and, when the paper became the
Michigan Voice,
his popularity soared.
The Wall Street Journal
ran a front page story on him,
Harper's
magazine reprinted one of his pieces and some shoe company wanted him to endorse their industrial boots (Ben knows boots). Meanwhile, he would take off work in the middle of his night shift at GM, come over to the
Voice
office, and try to get the staff to stop working and join him in his various vices. I remember one particular night watching him engage the staff in a game of lawn darts inside the building, using a poster of GM chairman Roger Smith as the target. I guess that was our version of the new journalism.

Finally, after nearly ten years of publishing the
Voice,
I was asked by a liberal millionaire to move to San Francisco and become the editor of
Mother Jones
magazine. The owner liked the “working class reality” of the
Michigan Voice
and wanted to put some of that into
Mother Jones.
It had once been the country's premier muckraking magazine, but now it was a soft, touchy-feely periodical that had lost over 80,000 subscribers. So, when I arrived in California on my mission to save the magazine, one of the first writers I commissioned was Ben Hamper. He wrote a hilarious piece I titled “I, Rivethead,” and I made it the cover story of my first issue. I then told him that he could continue his “Rivethead” column in each issue of the magazine. I even sent him on a promotional tour.

Well, never trust a millionaire when he tells you he wants that “working class reality” in his magazine. As my third issue was being readied for publication, the owner came into my office and, waving a copy of Hamper's latest column, asked me if I really intended on printing this smut. Yes, I said. Bye-bye, he replied. The next day I was in the unemployment line.

I went back home to Flint, where Ben tried to cheer me up by letting me watch his collection of Charles Manson interviews. On his shelf, I spotted a ball cap that, I felt, summed up my life at that moment. On the front of the cap was a giant lake trout with the words “I'm Out for Trout.” I asked Ben if I could borrow it and he said sure, but he wanted it back soon.

The next day, Roger Smith announced he was laying off another 10,000 workers in Flint. Buoyed by this development, I decided to make a film in which I would try to get Smith to come to Flint so he could see what happens to the people he throws out on the street. During the first day of shooting, I happened to wear Hamper's “Out for Trout” hat while on camera. To maintain coinsistency in the filming during the following days, I had to keep wearing that damned hat. That ball cap soon became the symbol for the film, and Hamper was not to have it on his balding head again.

As
Roger & Me
neared completion, I wanted to get permission from Bruce Springsteen to use his song “My Hometown” in the movie. I went to New York to meet with Springsteen's friend and biographer Dave Marsh to solicit his help. Instead, Marsh took me to task for once running a column by Hamper which poked fun at the Boss for being a multimillionaire while singing songs about working in a factory. Although I pleaded with Marsh that I despised everything that Hamper ever stood for, he stated “You were irresponsible for running such a thing. Ben Hamper is my ideological enemy.” He showed me the door, thus ending any chance of hanging with the guys at the Stone Pony. (Warner Bros., the distributor of
Roger & Me,
and the largest media conglomerate in the world—but apparently no one's “ideological enemy”—later got permission from Springsteen for the song.)

Midnight Sun by Sands, Basil
The Doctor's Defender (Protection Specialists Book 3) by Terri Reed
Lost Time by D. L. Orton
Though Waters Roar by Lynn Austin
The Small Hand by Susan Hill
Where the Indus is Young by Dervla Murphy
The Ghost Brigades by John Scalzi
The Quarry by Banks, Iain
The Darkest Place: A Surviving the Dead Novel by Cook, James N.
A Haunted Heart by Kristi Pelton