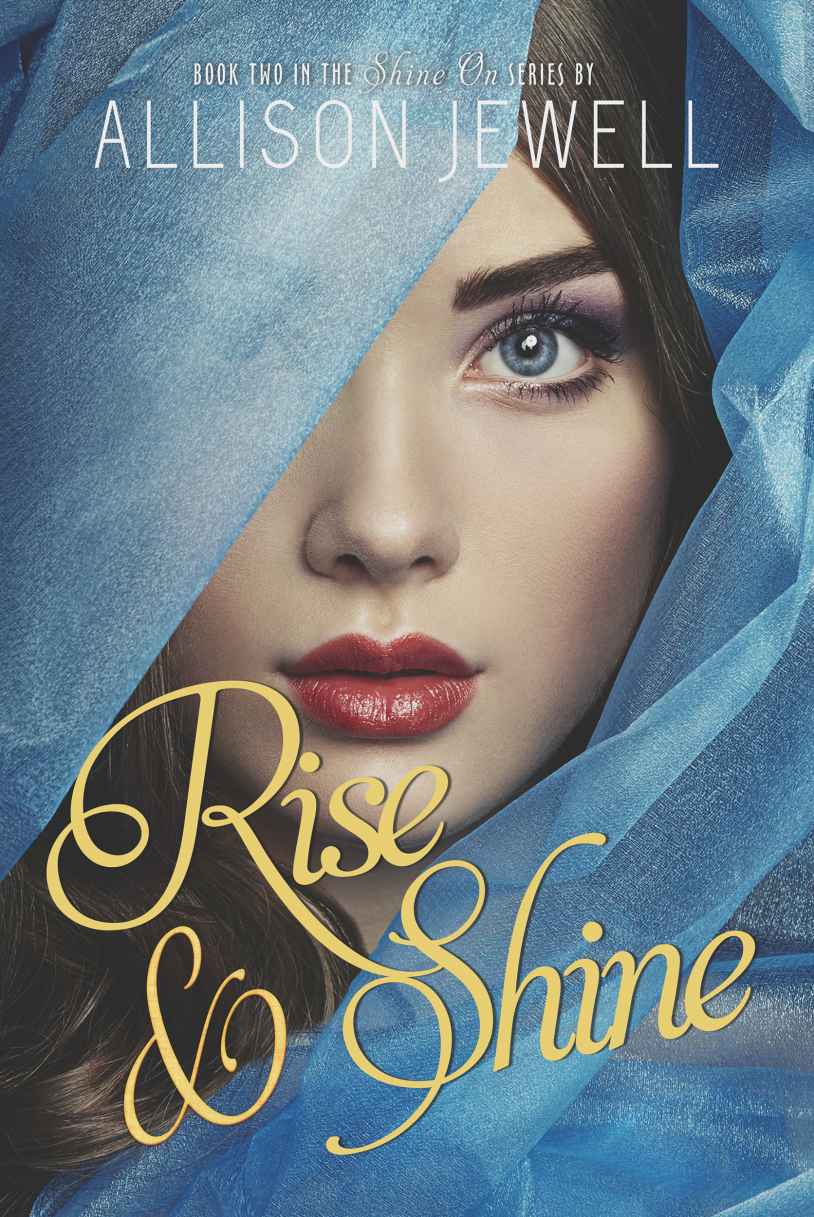 The Shine On Series

Connect with Allison on Substance B

For my boys, Elijah and Jonah, who make every day an adventure and for Daniel, who is my friend, love and partner in this journey.

I could not have created this book without the help of several people. Thank you to Daniel, my live-in historian, for supporting and helping me every step of the way; Karen Lawson, my wonderful editor, whose comments and feedback always make me think, smile or both; Kari Ayasha, my very talented cover artist; to Letitia Hasser, for sharing your creativity with series; to Paul and everyone at BB eBooks for all of the hard work, guidance, and patience in getting these books formatted and ready for publication; to Tracey, Kathy, Shellie, and all of my readers who love these characters as much as I do; to fellow author Laramie Briscoe for encouraging and motivating me in all things writing and life; to the members of my writing group for sharing your wealth of knowledge; to Susan, Rachel, April, Nikki, Alex, Scott and Julie, for teaching me how to help my sweet boy learn to persevere against great challenges and answering my questions about therapy in the twenties; to my friends and family, for your love and support in this writing adventure. I couldn’t have done this without you and finally, thank you to my mother, Jamie, who believed in me even before I believed in myself.

E
mmie’s body was stiff as she stepped out of the dark car and onto the city street. It was busy and loud. Nothing like the small downtown square back home.

“This is it?” Gabe grabbed Emmie’s old brown suitcase from the back of the car that had taken them from the train station to the hotel.

“I guess I’m just used to helping Ava with hers.” Gabe grinned and nodded toward the curb where Ava was talking with a bellhop for the Tealbach Hotel. The bellhop smiled and laughed at something she said while he loaded her belongings onto a shiny gold cart.

“Bless her heart,” Emmie laughed, taking in all six pieces of Ava’s red leather luggage. “Gabe, we are only staying the weekend right? You know, there is no telling what all she has hidden in those cases.”

He smiled and dropped her suitcase on the curb a few feet from where Ava’s were. Emmie noticed one of the other bellhops reached down to pick it up.

“Thanks but I can get it,” she said sweetly. The bellhop looked back at her confused. He still had one arm extended like he may take the suitcase right out of her hands. Pulling it closer to her body, she realized that she looked a little bit overprotective of her belongings. Really, she wouldn’t have minded letting the guy take up her things but it had just now occurred to her that this man wasn’t moving luggage out of the goodness of his heart. When he reached her room he was going to be expecting a tip and she refused to pay the man for something she could easily do herself.

“No…” she started but never got the chance to finish her sentence.

“Thank you, sir. She’s in room 233.” Silas came up behind her, took the luggage from her hand and tossed it to the man. Then he handed the young man a crisp bill. She couldn’t see the amount but from his smile she could tell the boy thought it a fair price.

Emmie turned around; trying her best to look annoyed, but had a hard time keeping up the front. “The good Lord gave me two arms and I can carry my own bags.”

He brushed a kiss on her forehead and pulled her in for a hug, resting his chin on the top of her head. She breathed in his scent. Emmie felt herself relax. All too soon he let go of her and took a step back saying hello to Gabe and Ava.

They shared pleasantries. Ava asked about his family and if they had settled in. Silas and Patrick, or Trick as most folks called him, had taken a train earlier in the week to Louisville to meet their family first. Emmie was going to be meeting them all tonight at the Halloween party and her stomach was in knots. Other than Trick, he rarely talked about his family.

If Emmie thought her train car had been elaborately decorated, it didn’t hold a candle to the lobby of the hotel. From the outside, it looked like any other nice hotel they had driven past. But the inside was so unique—it was what set it apart from the others. The windows were huge with pointy gothic arches. The chairs were deep hues of green, blue, and red. An elaborate staircase with a dark wooden banister cascaded down from the second floor. White marble floors echoed her footsteps. It was relatively empty and though it was elaborate, the feel was like a cavernous medieval castle.

“It’s the most beautiful place I’ve ever seen,” she said, her voice barely above a whisper. She’d never in her life set foot in a place like this. She forgot how to walk in its beauty, so she stood and gawked at her surroundings while Ava, Gabe, and Silas made plans to meet that evening.

“Well, if it isn’t Miss Emmie Shimmy,” Vince’s voice boomed. She’d missed his arrival. He was just releasing his sister and coming for Emmie.

“You better not,” she laughed, coming out of her stupor. There was no pool around but there was nothing Vince loved better than to find a way to razz her. She took a step backward to no avail. He was there in no time. He gripped her in a bear hug and whispered in her ear, “You’ve done good, Emmie.”

She pulled back and looked at him surprised.
I’ve done good?
She didn’t ask the question aloud but it showed in her eyes. He gave her a quirk of a smile that answered her question. She could see it in his face. Somehow, he’d been filled-in on everything that had happened in his absence and he was proud of her. That was odd. As quickly as he appeared, he slapped Silas on the shoulder and led the way to the stairs, heading off to his room.

Silas and Gabe walked the girls to their room to get ready for the Halloween party. Emmie couldn’t believe she would actually meet Silas’s family tonight. Although the festivities were still hours away, her heart was already in her throat. When you live in a tiny town you rarely meet new people, much less new people who you hope will be your family someday. The thought caught in her stomach and swam around for a while making her feel more nauseous.

The hotel room was absolutely stunning. It was more of an apartment than a room and decorated in the same European-castle feel. The lush fabrics of the sitting area were so inviting. Ava squealed and clapped her hands, taking her costume from her luggage. She hung the dress in the closet and carefully smoothed out the nonexistent wrinkles.

“Can you believe it is actually here? Oh, Emmie I love my costume, thank you so much for making it for me,” she cooed.

Emmie found her suitcase was already in the bedroom. She pulled out her own lovely black lace dress. Ava was right; it didn’t really look like a costume. Still though, she knew she’d made the sensible decision—black silk and lace should be worn more than one night. It’d have been a waste to turn this into a costume that could only be worn once. Emmie smoothed out the dress mocking Ava’s motions. She headed back to the living area and the small hallway closet. She hung her dress next to Ava’s. She turned around, watching Ava pour a tiny amount of something into cups from a little silver flask. She handed one to Emmie and kept one for herself.

“What is this?” Emmie asked.

“Oh, just a special autumn drink to kick off the celebration.” She grinned and held her hand out to clink glasses.

Emmie followed her motion and the girls tipped back the cup at the same time. She smiled before she even got the drink all the way down.

“How did you get it?” she wondered aloud.

“Silas. He left it hidden in the closet for us. He told me to check the closet for surprises while you were in your daze downstairs. I still cannot believe you made this,” Ava said, touching her lips.

Emmie could feel the warmth of the apple pie in her throat. He knew her well, she did need a shot of courage but more than that, she needed a shot of something that reminded her of home. She felt uncomfortable in her surroundings and that one sip of apple pie grounded her. How could he know that?

They’d come to know quite a bit about one another over the last few weeks. Just a couple days before he left, he had taken her to the barn to search for the mysterious box of photographs that Ronnie’s note had alluded to. Silas climbed into the rafters while she watched with bated breath. He’d found it relatively quickly. But then, she already knew he was a good snooper, didn’t she?

She had waited until they got back to his car to open the box. They sat in his front seat and dug through the secrets it held. At first, she thought Ronnie had led her to a bunch of nothing. The top had a few photographs of her as a very young child. But as she dug deeper into the white tattered box, its contents got more confusing. There was a ticket to some dance at a local cave that doubled as a nightclub, a program from an event at St. Joseph, and a couple more letters from her real father. They were always signed with his initials M.V.D. The first one was full of beautiful words, flowers, and promises, dated a full year before Emmie was born. The second was dated on Emmie’s first birthday. It was short and to the point, pretty much saying here is the money and how to contact me if you need more. Her heart broke for her mother. She dug deeper into the box. That’s when she saw it. A photograph dated the year before she was born. Her mother’s young face was smiling back at her. She was seated at a table, leaning back against a young man. He was handsome. Emmie was sure that she had his midnight black hair and maybe even his eyes. Their almond shape was reflected in her appearance.