Read Rip It Up and Start Again Online

Rip It Up and Start Again 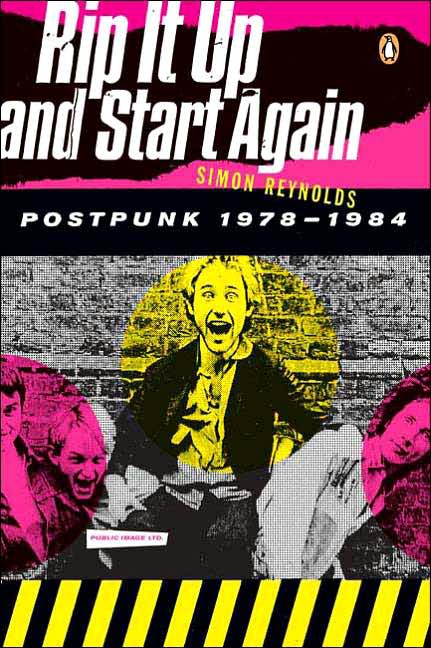 Simon Reynolds, a London-born music journalist living in New York, is the author of
Generation Ecstasy: Into the World of Techno and Rave Culture,
which was shortlisted for the 1999 Ralph J. Gleason Music Book Awards. His other books include
Blissed Out: The Raptures of Rock
and
The Sex Revolts: Gender, Rebellion, and Rock ’n’ Roll
(the latter coauthored with Joy Press). His pop-culture articles have appeared in the
New York Times,
the
Village Voice, Blender, The Wire, Uncut,
and many others, and his essays have appeared in over twenty anthologies. A former senior editor for
Spin,
he remains a senior contributing writer for the magazine.

Rip It Up and Start Again

T
0 MY BROT
H
ER T
I
M
,
WHO TURNED ME ON TO PUNK IN THE FIRST PLACE,
MY SON K
I
ERAN,
AND IN MEMORY OF
R
EBECCA
P
RESS
AND
B
URHAN
T
UFAIL

1.   Public Image Belongs to Me:
John Lydon and PiL

2.   Autonomy in the U.K.:
DIY and the British Independent-Label Movement

3.   Tribal Revival:
The Pop Group and the Slits

4.   Militant Entertainment:
Gang of Four, the Mekons, and the Leeds Scene

5.   Uncontrollable Urge:
The Industrial Grotesquerie of Pere Ubu and Devo

6.   Living for the Future:
Cabaret Voltaire, the Human League, and the Sheffield Scene

9.   Contort Yourself:
No Wave New York

21.   Dark Things and Glory Boys:
The Return of Rock with Goth and the New Psychedelia

22.   Raiding the Twentieth Century:
ZTT, the Art of Noise, and Frankie Goes to Hollywood

For Discography and Discography Part 2: Postpunk Esoterica (the latter featuring extensive commentary) go to the
Rip It Up and Start Again
Web site at www.simonreynolds.net, which also contains footnotes, source notes, transcripts, interviews with the author, links, and other postpunk-related material.

PUNK BYPASSED ME
almost completely at first. Thirteen going on fourteen at the time, and growing up in an English commuter town, I only have the faintest memories of 1977. I vaguely recall photo spreads of spiky-haired punks in a Sunday newspaper magazine, but that’s it really. The Sex Pistols swearing on television, “God Save the Queen” versus the Royal Jubilee, an entire culture convulsed and quaking—I simply
did not notice
. As for what I was into and up to
instead,
well, it’s a bit of a haze. Nineteen seventy-seven, was that the year I wanted to be a cartoonist? Or, having moved onto science fiction, did I spend 1977 systematically working my way through the local library’s cache of Ballard, Pohl, Dick? All I know for sure is that pop music barely impinged on my consciousness.

My younger brother Tim got into punk first. There was always this god-awful racket coming through the bedroom wall. One of the many times I went in there to complain, I must have lingered. The profanity hooked me first (I
was
fourteen), Johnny Rotten’s “fuck this and fuck that/Fuck it all and fuck her fucking brat.” More than the naughty words themselves, it was the vehemence and virulence of Rotten’s delivery—those percussive “fucks,” the demonic glee of the rolled
r
s in “brrrrrrrat.” There have been a thousand carefully reasoned theses validating the movement’s sociocultural import, but if anyone’s really honest, the sheer monstrous
evil
of punk was a huge part of its appeal. Take the sickness of Devo, for example. I’d never heard anything so creepy and debased as their early single “Jocko Homo” and its flip side, “Mongoloid,” brought around our house by a far more advanced friend.

When I got into the Pistols and the rest, at some point in the middle of 1978, I had no idea that this was all officially “dead.” The Pistols were long split. Rotten had already formed Public Image Ltd. Because I’d been otherwise occupied and missed the entire birth, life, and death of punk, I also cannily skipped the mourning after, that sickening ’78 crash experienced by almost everybody who was “there” and aware during the exhilarating ’77 rush. My belated discovery of punk coincided with the period when things began to pick up again, with what soon became known as postpunk, the subject of this book. So I was listening to X-Ray Spex’s
Germfree Adolescents,
but also the first PiL album, Talking Heads’
Fear of Music,
and
Cut
by the Slits. It was all one bright, bursting surge of excitement.

Music historians exalt being in the right place at the right time, those critical moments and locations where revolutions and movements are spawned. This is tough on those of us stuck in suburbia or the provinces. This book is for, and about, the people who weren’t there at the right time and place (in punk’s case, London and New York circa 1976), but who nonetheless refused to believe it was all over and done with before they joined in.

Young people have a biological right to be excited about the times they’re living through. If you are very lucky, that hormonal urgency is matched by the insurgency of the era, and your built-in adolescent need for amazement and belief coincides with a period of objective abundance. The prime years of postpunk—the half decade from 1978–82—were like that: a
fortune
. I’ve come pretty close since, but I’ve never been quite as exhilarated as I was back then. Certainly, I’ve never been so utterly focused on the present. What’s weird, as I recall it now, is that I never bought old records during that period. Why would I have? There were so many new records to buy that there was simply no earthly reason to investigate the past. I had cassettes of Beatles and Stones best-ofs taped off friends, a copy of the Doors’ anthology
Weird Scenes Inside the Goldmine,
and that was it. This was partly because the reissue culture that inundates us today didn’t exist then; record companies actually
deleted
albums in those days, so huge swathes of the recent past were virtually inaccessible. But mainly it was because there was no time to look back wistfully to something you’d never lived through. There was too much happening
now
.

In retrospect, as a distinct pop-cultural epoch, 1978–82 rivals that fabled stretch between 1963 and 1967 commonly known as the sixties. The postpunk era makes a fair match for the sixties in terms of the sheer amount of great music created, the spirit of adventure and idealism that infused it, and the way that the music seemed inextricably connected to the political and social turbulence of its era. There was a similar blend of anticipation and anxiety, a mania for all things new and futuristic coupled with fear of what the future had in store.

Not that I’m especially patriotic or anything, but it’s also striking how both the sixties and the postpunk movement were periods during which Britannia ruled the pop waves. Which is why this book primarily focuses on the U.K. Of course it also deals with American cities where punk happened in any major way: the bohemian capitals of New York and San Francisco, Ohio’s postindustrial dreadzones Cleveland and Akron, college towns such as Boston, Massachusetts, and Athens, Georgia. However, in America, punk and postpunk were much more underground, minority cultures than in the U.K., where one could hear the Fall and Joy Division on national radio, and groups as extreme as PiL actually had Top 20 hits and, via the weekly TV show
Top of the Pops,
were beamed into ten million households. Regretfully, for reasons of space and sanity I decided not to grapple with European or Australian postpunk, except for certain key groups—such as D.A.F. and the Birthday Party—that significantly impacted Anglo-American rock culture.

I have both personal and “objective” reasons for writing this book. Foremost among the objective reasons is that postpunk is a period that has been severely neglected by historians. There are scores of books on punk rock and the events of 1975–77, but virtually nothing on what happened next. Conventional histories of punk end more or less with its “death” in 1978, when the Sex Pistols self-destructed. In the more extreme and sloppy accounts (TV histories of rock are particularly culpable), it’s often implied that nothing of real consequence happened between punk rock and grunge, between
Never Mind the Bollocks
and
Nevermind
. Even after the boom in eighties nostalgia, that decade still tends to be regarded as a musical wasteland redeemed only by mavericks such as Prince and the Pet Shop Boys, or by worthies such as R.E.M. and Springsteen. The early eighties, especially, is still considered a campy comedy zone, an era characterized by pretentious stabs at video-as-art-form and by English eyeliner-and-synth fops with silly haircuts. Fragments of the postpunk story have emerged here and there. But nobody has attempted to capture postpunk as what it was, a counterculture that, while fragmented, shared a common belief that music could change the world.

Being as impartial and detached here as possible, it seems to me that the long “aftermath” of punk running from 1978–84 was
way
more musically interesting than what happened in 1976 and 1977, when punk staged its back-to-basics rock ’n’ roll revival. Even in terms of its broader cultural influence, it is arguable that punk had its most provocative repercussions long after its supposed demise. Part of this book’s argument is that revolutionary movements in pop culture actually have their widest impact after the “moment” has allegedly passed and the ideas spread from the metropolitan bohemian elites and hipster cliques that originally “owned” them into the suburbs and outer regions.

Another objective reason for this book is that there has been a huge resurgence of interest in the period, with compilations and reissues of archival postpunk, and a crop of new bands who’ve modeled themselves on postpunk subgenres like No Wave, punk funk, mutant disco, and industrial. A young generation of musicians and listeners has finally come of age without any memory of this era. Some current twentysomethings weren’t even born by this book’s cut-off date, 1984, and as a result find the period massively intriguing. Indeed, because it’s been neglected for so long, postpunk offers a rich seam for the thriving retro industry.

I said there were subjective reasons for my writing this book as well. Subjective Reason Number One is my memory of this period as superabundant, a golden age of newness and nowness that created a sensation of moving at high speed into the future. Subjective Reason Number Two relates more to the present. When rock critics reach a certain age they often start to wonder if all the mental and emotional energy they’ve invested in this music thing was actually such a shrewd move. Not exactly a crisis of confidence, but a creasing of certainty. In my case, this prompted me to wonder when exactly it was that I made the decision to embark upon a life of taking music seriously. What made me believe music could matter this much? It was of course that I grew up in the postpunk era. That near simultaneous double whammy of the Pistols’
Bollocks
and PiL’s
Metal Box
set me on my present course. It was also the writing in the music press about these records, and records like them, that formed me, writing that week by thrilling week explored and tested just how seriously one could take music (a conversation that continues to this day in different forms and other places). So this book is in part a reckoning with my younger self. And the conclusion I reached? You’ll just have to read on.