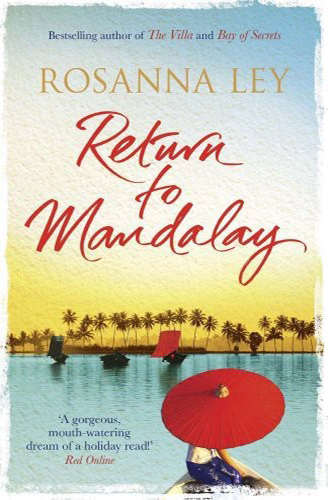 First published in Great Britain in 2014 by

The moral right of Rosanna Ley to be identified as the author of this work has been asserted in accordance with the Copyright, Designs and Patents Act, 1988.

All rights reserved. No part of this publication may be reproduced or transmitted in any form or by any means, electronic or mechanical, including photocopy, recording, or any information storage and retrieval system, without permission in writing from the publisher.

This book is a work of fiction. Names, characters, businesses, organizations, places and events are either the product of the author’s imagination or are used fictitiously. Any resemblance to actual persons, living or dead, events or locales is entirely coincidental.

You can find this and many other great books at:
www.quercusbooks.co.uk

Rosanna Ley
works as a creative writing tutor and has written many articles and stories for national magazines. Her writing holidays and retreats take place in stunning locations in Spain and Italy. When she is not travelling, Rosanna lives in West Dorset by the sea.

For Grey, with love.

And in memory of Peter Innes, John Sams and all the men who fought in Burma.
Never forgotten
.

‘Could you come through to the office, Eva?’ Jacqui Dryden’s voice was, as always, cool and slightly irritated.

Eva was stooping over a Victorian dressing-table repairing the spring mechanism of a tiny drawer in the panelling. She straightened up. Ouch. Rubbed her back with the heel of her hand. It was a delicate job and she hadn’t realised quite how long she’d been stuck in that position.

‘Just coming,’ she called back. Briefly, she touched the top of the walnut dressing-table with her fingertips as if promising her swift return.

Jacqui Dryden was standing staring out of the large bay window into the street below. It was a Thursday afternoon in late October and Bristol city centre was as busy as ever. The Bristol Antiques Emporium was well placed in a side street where rents were lower but there were still enough individual-looking shops to pull in passers-by. Vintage was in, business was brisk and Eva’s boss should have been happy. She looked anything but. Her make-up was as flawless as ever, but there was something despairing in her blue eyes that Eva hadn’t seen there before. Could it be anything to do with the raised voices she’d heard coming from the office this morning?

‘Come in.’ Jacqui turned towards her, the despairing expression vanished and Eva felt her scrutiny. Her boss had this way. She was a little over five feet tall, blonde and perfectly formed, and when she was around her, Eva invariably felt awkward, clumsy, too tall. She wasn’t used to feeling like that. She brushed some sawdust from her jeans. Her hands were dusty too and she realised she had a splinter in her thumb. She kept her nails clipped short because of the nature of the job and at work wore jeans, a T-shirt and a pair of old Converse, tying her unruly dark hair back in a ponytail so that it wouldn’t get in the way. She could imagine how she looked to Jackie, could see what she was thinking. She wasn’t at her most glamorous. But this was work and Eva relished immersing herself in it.

Jacqui didn’t invite her to sit down, didn’t so much as smile. Several times over the past few months, Eva had been tempted to tap on her boss’s shell, try and make it crack a little and take a peek inside. But she hadn’t risked it – at least, not yet.

‘I need you to go away on an assignment,’ Jacqui said without preamble.

‘Away?’ Eva echoed. That was a first. ‘What kind of assignment?’

She had worked at the Emporium for six months now. The job had attracted her because the company dealt mainly in Asian antiques. Thanks to her grandfather, as a child she had fallen in love with wood and with history; they were in her blood. At nineteen, she had left home in Dorset – a home that had splintered to pieces after her father’s death when Eva was
only six – and gone to university in Bristol to study antique furniture restoration with decorative arts. Specialist subject: Asian artefacts. And that was thanks to her grandfather, too. That was sixteen years ago now. But there was still so much, Eva reminded herself, to thank him for.

Jacqui didn’t answer the question. Her partner, Leon – in business and life – hadn’t answered her questions in the office this morning either. ‘Why should you care? Tell me what’s going on,’ Jacqui had demanded. ‘Or I walk out of here this minute.’ But Leon hadn’t and so Jacqui had. She had stalked out of her office in her pencil skirt and stilettos right past where Eva was busy repairing the scabbard of an old Japanese sword and pretending she hadn’t heard what was being said.

‘As you know,’ Jacqui said to Eva now, ‘our Asian stock is selling very well at the moment.’

‘Yes.’ Of course, she had noticed. The company were expanding that side of the business and soon perhaps Victorian walnut dressing-tables would be a thing of the past, so to speak. Many countries were opening up more than ever before and those in the Far East were in a position to take advantage of growing international interest in their colonial furniture, a legacy of days gone by, and in their cultural and religious artefacts too. Like their old stone Buddhas, for example – and they’d seen a few of those in the Emporium – often so badly eroded that they’d no doubt had new ones made by some local stonemason. The Bristol Antiques Emporium hadn’t wasted any time in forging lucrative partnerships with Far East traders who wanted to sell.

‘But there are problems.’ Jacqui tucked back a strand of fine blonde hair that had dared escape the fifties’ chignon she favoured. ‘Too much stock is arriving badly damaged, for a start.’

‘Which could certainly be avoided,’ Eva agreed. She was the person who generally had to repair it. She had joined the Emporium hoping to make use of the expertise she’d gained doing her degree. At last, she’d thought. It had been thirteen years since she’d graduated, but none of her jobs had quite fulfilled her expectations. She’d worked in a secondhand furniture shop for a man who specialised in cold-calling with the express purpose of parting old ladies from family heirlooms with as little money changing hands as possible, until Eva could almost feel his smug smile destroying her soul. She’d worked in a museum shop, where she’d met her friend Leanne. And she’d spent over a year as a seamstress in vintage wedding hire. This was the time – she’d hoped – for her career to take off in the direction she wanted it to.

But the reality of the Emporium had proved another disappointment. Most of her time was spent doing run-of-the-mill repairs, cleaning, unpacking and often dealing with customers too. They might have formed a lucrative partnership, but the Bristol Antiques Emporium was under-staffed. Apart from Jacqui and Leon, there was only Lydia, who worked part-time in the antiques showroom above. And Eva who did just about everything else.

‘If we can find a way of avoiding it, yes.’ Jacqui frowned.

‘Can’t our contacts check the packaging before shipping?’ Eva asked mildly. Many of the countries they dealt with packaged the goods poorly – often only with shredded newspaper. They didn’t seem to appreciate the vulnerability of some of the more fragile pieces.

‘And …’ Jacqui dismissed this suggestion with a wave of her manicured hand. ‘Our contact has come across some unusual items we may be interested in.’

‘Statuettes, wooden furniture, eighteenth and nineteenth century – even earlier, some of it. Unique, primitive, just the sort of thing we’re looking for.’ For a second her eyes brightened with enthusiasm. ‘But …’ She hesitated. ‘I don’t fully trust our contact there.’ She glanced at Eva as if to gauge her reaction.

Eva shrugged. She didn’t need to ask why not. Firstly, six months working for Jacqui Dryden had shown her that her boss rarely trusted anyone, probably not even Leon, come to think of it. And secondly, she was aware that many of their contacts in the Far East had their own agenda. Why should they feel loyalty to their overseas dealers? Why shouldn’t they look out first for their own families, their own countries, when so many of them had lived in poverty for so long?

‘The provenance sounds more than plausible,’ Jacqui told her. ‘But they need to be authenticated.’

‘Oh, I see.’ Eva felt the fizz of anticipation. This was why she’d joined the company. Authentication, restoration, re-living history almost. And travelling too. That was
an unexpected bonus. After the month she’d had, it sounded exactly what she needed.

‘You could do that, couldn’t you?’

‘Of course.’ It was what she’d been trained for. And this trip would give her the chance to prove her skills.

Once again, Jacqui frowned. ‘You wouldn’t object to going on your own?’

‘Not at all.’ Eva preferred to work independently. And it would be an adventure. ‘I presume that you also want me to talk to our contact?’

‘Yes.’ Jacqui shot her an unfathomable glance. ‘You’ll need to reinforce our relationship with him.’ She seemed to be choosing her words carefully. ‘But it will need sensitive handling.’