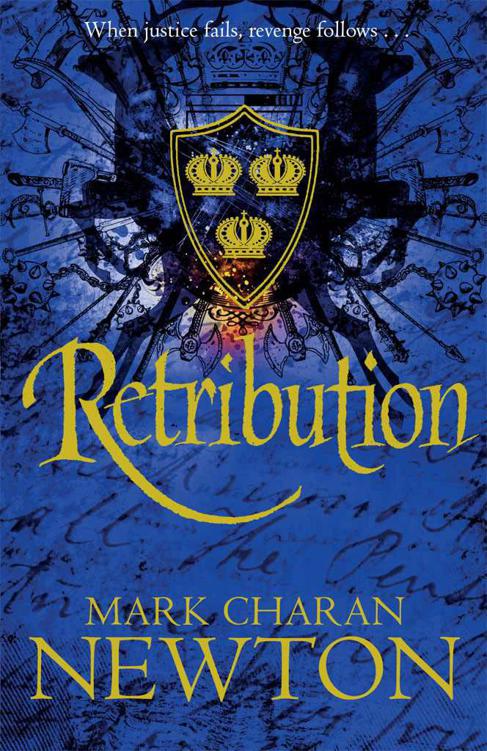 Thank you for buying this book. You may have noticed that it is free of Digital Rights Management. This means we have not enforced copy protection on it. All Tor ebooks are available DRM-free so that once you purchase one of our ebooks, you can download it as many times as you like, on as many e-readers as you like.

We believe that making our Tor ebooks DRM-free is the best for our readers, allowing you to use legitimately-purchased ebooks in perfectly legal ways, like moving your library from one e-reader to another. We understand that DRM can make your ebooks less easy to read. It also makes building and maintaining your digital library more complicated. For these reasons, we are committed to remaining DRM-free.

We ask you for your support in ensuring that our DRM-free ebooks are not subject to piracy. Illegally downloaded books deprive authors of their royalties, the salaries they rely on to write. If you want to report an instance of piracy, you can do so by emailing us:
[email protected]
.

The Tor UK team & our authors 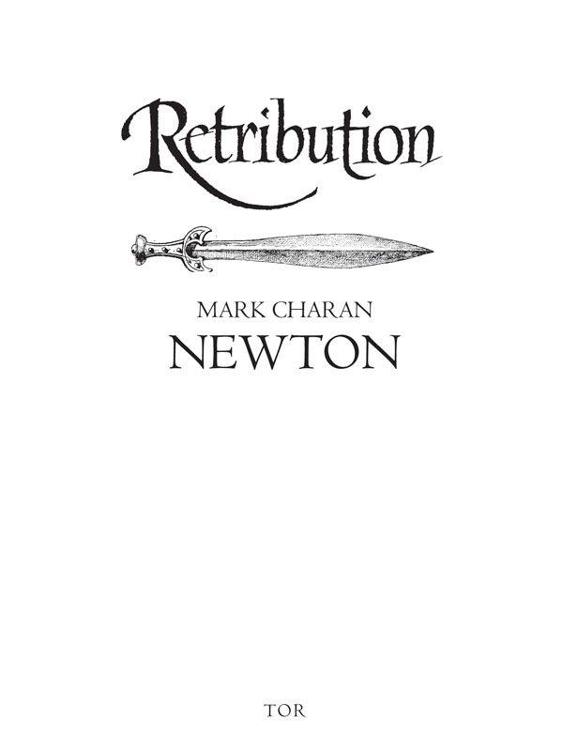 ‘If only nations would realise that they have certain natural characteristics, if only they could understand and agree to each other’s particular nature, how simpler it would all be.’

—D. H. Lawrence, ‘The Crucifix Across the Mountains’ 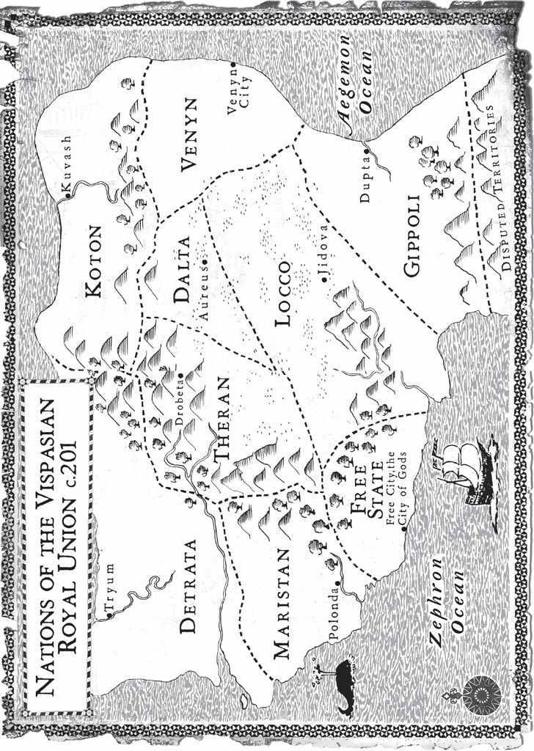 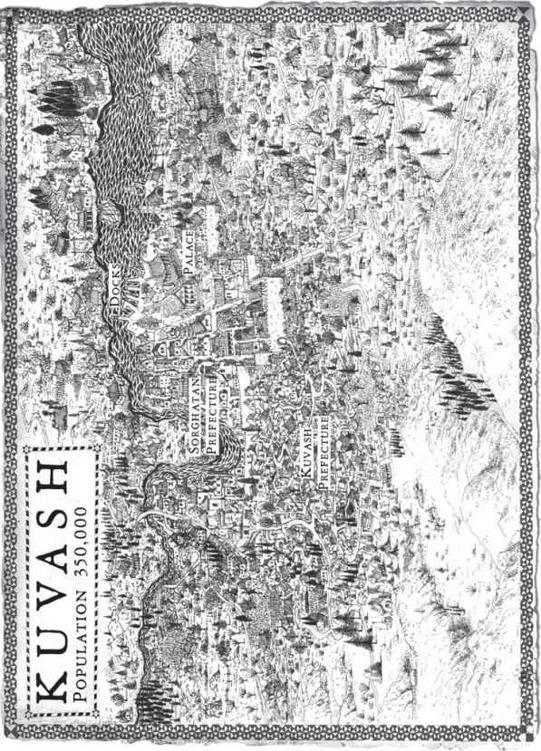 A Place to Stay

Show Us the Head

Morning in the City

A Cartography of Murder

Return of the Guard

Standing perfectly still, I listened to the patter of the rain, mesmerized by its cadence as it brushed the leaves of the forest. Ahead of me four children from Bathylan, each of them wearing only a pair of short trousers and a ragged old shirt, played a game around the trees. One couldn’t help but smile at the way they endured the rain. Most adults tend to view the rain as a nuisance that soaks our clothes or delays our plans. We seek shelter under arches or loiter in taverns, scowling at the sky. But not these children. For them the rain brought a wonderful new dimension to their day. The sudden deluge delighted them and their faces creased in innocent delight.

Sometimes I long to have such a view of the world again, and wonder what it might take to reclaim that perspective. But in over thirty years of life, a decade of which has been spent as an Officer of the Sun Chamber, the world has long since robbed me of my
limitless
optimism.

This was a beautiful forest and my time here among the low, damp branches of hazel and ash was pleasant indeed, but I needed to head back to the settlement of Bathylan before the rain gathered momentum and really drenched me.

Leaving the children to their games, I walked back towards the chasm. Standing at this precipice, my breath caught in my throat. Great heights were not an issue for me, but this enormous gap took even my breath away. A scar right through the forests and grasslands on the border of Koton and Detrata, it was a mile long and eight hundred feet wide, and an imposing sight. Down the cliff faces, birds spiralled towards their nests among the nooks, and at the very bottom, barely seen, were the white tips of a river in full flow.

The wind began to pick up, offering relief from the humidity, as I strode across one of the four wooden bridges leading to the central village, which stood atop a single island of rock in the centre of the chasm. The bridge shifted this way and that under the pressure of my steps.

Bathylan was a settlement no bigger in size than the largest and most sprawling of villas, but it had developed into an important diplomatic exchange point for trade and information. Situated on the border of Koton and Detrata, it owed allegiance to neither, though both flags could be seen on the rooftops: the black bird in profile on a yellow background for my home nation of Detrata, and the raised red stag on bold blue for Koton. Truth be told Bathylan had become an administrative island of its own, with tiny embassies and aged diplomats looking for a quiet life.

One did not settle in a place like this. It was the sort of settlement that attracted travellers, a handful of well-established traders seeking to avoid tax, or spies, for it was well plugged in to the political scene. It was always easy to tell who the agents were. They always discussed, in a nonchalant manner full of casual hand gestures, that they were travelling on business, ‘researching properties’ or ‘investment opportunities’ on behalf of someone else. Imports and exports; the old trade. I made a point of smiling and revealing my Sun Chamber brooch to them, the flaming sun. It silenced some. Others thought it an opportune moment to pick my brain on various political agendas, showing no shame in their effort to glean information from me. Despite their presence, Bathylan, with its regular thoroughfare, and a gateway to the rest of the continent, was the perfect hub to rest for a few days while waiting for further orders.

On the twenty-first day of our stay I peered out from the shelter of the balcony and sighed at the continual dreary weather. At the opposite end of the garden the blue of the flag of Koton could just about be made out. Beyond the Kotonese flag were the towering, forested and fortified hills – the rolling green vista of the high country – almost lost in the incessant drizzle.

Upon discovery of a small library within the settlement, I had used its resources to brush up on my history of the nation before me. The current ruler, Queen Dokuz Sorghatan, had inherited the throne from her father, king Vehan Sorghatan, who had seized the throne in a military coup. For decades powerful rival factions had bickered over power within Koton, with no one clan ever maintaining overall control. The king’s bloody siege, known as the Night of Plunging Blades, had put an end to the matter once and for all and established him as the sole ruler. He had spent his final years in deep paranoia that someone would return the deadly favour to him. But he died peacefully two decades ago, and his only daughter, the young Dokuz Sorghatan, ascended the throne. It was claimed by the scholars who wrote lengthy pieces on Koton that the queen had since worked miracles with the nation and dragged it into the modern age, attempting to bury and rewrite the crude ways of the nation’s past – but I noted that the scribes themselves were of Kotonese origin, and were hardly likely to claim otherwise.

A figure tramped quickly up through the swamp-like gardens of the station post. As she marched along the deck her boots thudded on the wet wood. It was my companion Leana. She took the steps up towards me two at a time. Her wax coat was sodden, even though the journey to the gatehouse to check for any new messages was short. A thick leather cylinder was clutched in her hand.

‘Next time,’ she said, the water pooling by her feet, ‘you can fetch your own post.’

As if the gods themselves willed it, a jagged line of lightning split the skies. It was followed shortly by a stomach-rocking boom.

‘Anyway,’ I continued, ‘let’s take a look at this. Hopefully, we’ll have orders to move on.’

I took the dripping tube from her and noted the flaming sun in the wax seal – an icon of the Sun Chamber.

I hastily opened it and pulled out a rolled-up letter.

‘What does it say?’ Leana asked impatiently, every bit as eager as me to have a new job.

‘At least let me finish it first. It’s from Commissioner Tibus herself.’