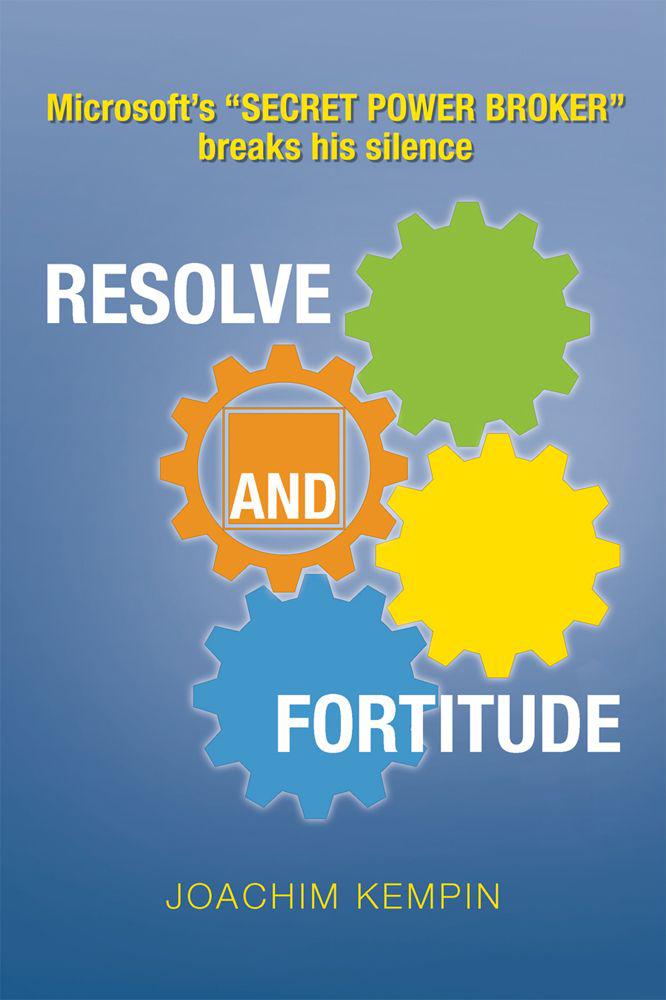 All rights reserved. No part of this book may be reproduced or transmitted in any form or by any means, electronic or mechanical, including photocopying, recording, or by any information storage and retrieval system, without permission in writing from the copyright owner.

Copyedited and reviewed by Fatimah Imam

GETTING MY FEET WET

THE WORLD BELONGS TO ME

GETTING OUT OF BONDAGE

CRISIS IN THE FAR EAST

PIRATES OF THE WORLD

THE SAGA OF BIG BLUE

IN THE SHADOW OF CHICAGO

ON STAGE AND BEYOND

OF OPPORTUNITIES AND THREATS

PRELUDE IN THE SENATE

IN THE SHADOW OF THE FEDS

THE ONLY MAN BILL GATES MAY FEAR

BACK IN JACKSON’S COURT

THE BUSINESS MUST GO ON

NOBODY IS IMMUNE TO FAILURE

JUSTICE ON THE BLOCK

IN THE LION’S CAGE

SEARCHING FOR A SUCCESSOR

A STATE OF DISORDER

A COOL RENAISSANCE TO BE RECKONED WITH!

APPENDIX:
HOW MICROSOFT GOT HER STRIPES

AND HOW I EARNED MINE

The trip from Paris to Seattle had not been wasted. They wanted me! About time somebody recognized this German guy can do more than manage Apple’s small European software-marketing team. It took Bill Gates, co-founder and CEO of Microsoft, the better. The only thing left was to say “
Yes
, for the right amount” and take the challenge head-on.

Onward I went, and more than thirty years later, let me now share with you what happened after I sealed the deal. It did not stop with running Microsoft Germany successfully. Headquarters called on me a second time and offered me a promotion, and off I went to emerge into Microsoft’s power nexus from where I managed—for over fourteen years—her dealings with personal computer (PC) manufacturers.
1
In doing so, I achieved senior vice president status long before I left the company in 2002 to retire happily.

Being trusted with that job was the unforeseen highlight of my career. The primary objective of the group I managed was to sell operating systems—the software code which makes computers tick—to PC manufacturers. The most important software we offered, Windows, defines Microsoft’s heart and soul. Its success made the company the number one juggernaut in the information technology universe. When this book will be published, at version 8, Windows will have experienced much iteration since I had left. It still dominates the PC world, but Microsoft has struggled to get a foothold in the tablet and smartphone market with its derivatives—a humbling experience for a company that once reigned so supreme! Antitrust concerns, internal turf wars, and certain unwillingness to forcefully defeat competitors or boldly conquer new grounds are the main reasons for failing to keep the once-uncatchable, seeming-frontrunner position.

Aptly, my story converges on how the company fought and won operating system wars—how major triumphs and breakthroughs were achieved and how my group contributed to foment Microsoft’s lead. As long as Microsoft was the hardworking underdog aiming for the coveted number one spot in the information technology industry, the press and the public showered her with admiration. Eventually, her exorbitant success bred jealousy and spite, echoing volleys of gunfire from competitors and regulators alike—tremendously changing the public perception of the company.

My group’s actions and the inner machinations of Microsoft landed crosshairs dead center in the middle of two major Department of Justice headline trials. Intimately involved, I sweat through all of them. Not necessarily what I had signed up to when I said
yes
to Germany.

A journalist once wrote that like an “enforcer,” I “wielded the pricing sword” for Microsoft’s operating systems. Others called me “Microsoft’s secret power broker.” Not needing monikers, I kept them guessing—a game I loved to play. Then, the public had no right to know! Yet the time has come to reveal what went on behind the scenes and lastly unearth the bold-faced truth and intimate details I lived through and contributed to. The turmoil, the challenges, the victories, and the defeats. Occurrences I undeniably and irrefutably put my mark on as I cherished every moment of being part of the by-now historic PC revolution.

Let’s warm up in Germany and follow the path my group took to win the operating system wars. Let the voyage continue with a critical review of Microsoft’s antitrust trial. I invite you to examine from a key witness’s perspective what economic theories and legal tactics our pursuers harnessed to ultimately get the company condemned and partially regulated. Following this, I will issue a report card for the company’s current management and investigate how her lead got eroded by computing paradigm shifts, emerging competitors, and the failure to respond timely and vigorously. After examining the impact of Windows version 8 in regard to serving an increasingly mobile and socially active computing crowd and its potential to reverse Microsoft’s fortune, I will finish by challenging Microsoft’s’ board and leadership team to restructure the company. I firmly believe that drastic changes are needed so Microsoft can conjure some future magic and impress the investment community anew.

An educational, revelatory, and exhilarating trip is waiting. Illuminated and put into perspective by my thirty years of work experience in the information technology industry. My views being controversial, disagreements will be abounding. Let the debate begin!

PS: For readers less familiar with some of the technology mentioned in the book, the state of the personal computer market from the late 1970s to the mid-1980s, or my biography, please study the appendix in more detail.

GETTING MY FEET WET

“Sacrifice for the cause and you will prove your worth!”

Words spoken by my new boss, Scott Oki, still ring in my ears! That third-generation Japanese American preached what he practiced. Highly disciplined, energetic, and intelligent, Scott had gained the trust of Microsoft’s founder, Bill Gates, through hard work and superior management skills. He shared Bill’s dream of dominating the personal computer software industry and made sure the crew he managed worked feverishly to make this vision come true. High ethical work standards made him a tough boss. He communicated his intents unambiguously and made clear that only success would earn you a longer leach. Scott—he kept his word. As the German subsidiary grew from zero to $15 million during his three years as my boss, he entrusted me to coordinate the retail aspect of our business for all of Europe.

I maintain the utmost respect for Scott and regretted his departure in ’86 to take over Microsoft’s ailing US retail business. All country managers chipped in and gave him a symbolic farewell present: a glass replica of Caesar’s thumb. No doubt he had us under his, but performing well, I never felt uncomfortable. We learned from each other. His appreciation of my performance later caused him to again influence my career by recommending me to take over the OEM sales and marketing group.

Life as subsidiary manager was quite different from my earlier work assignments. The buck stopped with me. Microsoft (MS) was a company on the frontiers of technology, sizzling with ambition, innovative passion, and the white heat urgency of the desire to succeed. My job was to create a crew who shared the company’s goals passionately and to find a way to let our results stand out. The mother ship created winning products; the subsidiary established effective distribution systems and worked the local PR channels.

Geographically I was responsible for doing commerce in Germany, Austria, Switzerland, and all Eastern-bloc countries. Our retail business targeted Apple and IBM PC users. We reached them through distributors in merchant outlets. The products we sold in that fashion were PC programming languages, application software, and a few PC hardware add-ons. To promote these, we used creative print advertising and means of public relations.

The most exciting part of our business was dealing with local PC manufacturers, conducting what consisted of selling MS Disk Operating System software (MS-DOS) and early versions of MS Windows to local PC manufacturers. Most of them simply purchased DOS licenses from us. Others, like Siemens, had piled on behind Windows early and enthusiastically. In Triumph-Adler and Siemens we acquired two customers for our Xenix operating system—an MS proprietary UNIX
2
version.

One aspect helping us win was our ability to produce localized product versions well ahead of competition. In the spreadsheet category, having a German version of Multiplan available propelled us right past our competitors Lotus and VisiCalc. Soon our sales in Germany surpassed the nearly unrivaled US product leader Lotus 1-2-3, resulting in the early dismissal of Lotus’s first subsidiary manager. In the word processor category, it took a bit longer to beat the entrenched WordStar competition, but eventually we succeeded there as well. A German version of MS-DOS gave our main operating system (OS) competitor Digital Research Inc. (DRI) a huge headache while awarding us the edge in dominating the local OEM market.

We fought hard for these gains, pursuing our missions vigorously and with immense focus. I submerged in and was so inspired by MS’s culture that I made the company my second home. My family accused me of being married to her; somehow I was and it paid off. Germany was soon MS’s largest subsidiary in Europe, generating 10 percent of corporate revenue. Our success created some jealousy and rivalry. My French colleague Bernard Verges could not stomach our premier position and, in a more or less friendly way, challenged our sales results every month. With a larger market potential and a dedicated team on my side, he never surpassed us. Thank you, old crew!