Reilly 13 - Dreams of the Dead 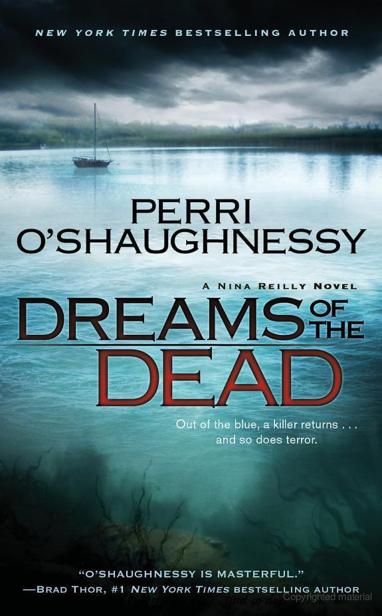 All rights reserved, including the right to reproduce this book or portions thereof in any form whatsoever. For information address Gallery Books Subsidiary Rights Department, 1230 Avenue of the Americas, New York, NY 10020.

GALLERY BOOKS and colophon are trademarks of Simon & Schuster, Inc.

Dedicated to Nancy Elizabeth Mason, M.D.
For bringing three precious lives into our lives,
and for thirty years of friendship and caring.
And, as always, Brad.

To Harry Berger, Jr., an inspiration to many, and good friend.

T
he dreams of the dead are unimportant to the living. Once they were told to loved ones, turned into reality, and whispered in prayer, but now they were locked away. Silent and unreachable, such dreams are.

Lake Tahoe lay passive under the long rays of the April afternoon, a repository of more than water. I tacked in an easterly breeze toward Meeks Bay with its still-snowy promontory. All around the lake the white Sierra peaks were the only witnesses to the small sailboat.

Maybe the dead dreamed even more vividly now, with activated souls. That they no longer moved meant nothing.

Why do modern people ignore these extended sunsets of their ancestors? I know the dead exist for a long time after death, as long as the disintegrating flesh and bone.

Safe from possible pursuers and witnesses now, under control again, I screwed the lid off a second bottle of beer and drank some, guiding the tiller, the boat moving smoothly out to the spot I had chosen on his map. Some sages said the dead spent their time redreaming the time when they were alive. They wouldn’t know they were dreaming. They would fly, love, win the one they wanted in life. They would lose their teeth, not be able to find their lockers, be pursued by stupid trolls, think they were talking to the dead and living, fall harmlessly off cliffs.

Maybe they relived death. I hoped Jim would. And I hoped this time he would feel the deaths of the people he had killed. Yes, why
not? Dreams contain strong emotions. Jim would live the killings over and over and maybe even feel something unusual happening now—bewilderment, and distaste at being disturbed, removed from this frigid mountain bed.

A scientist once said that after cremation much of the body is lost, not released to the air or anywhere. Where did it go? Cremation, then, would unnaturally and instantly kill the dreaming soul. Burial was the proper way to treat the dead, or plucking by vultures, or insufficient burning as at the Varanasi ghats, so the dead could have their centuries to dream as they returned particle by particle to the soil.

I
tied off the tiller, loosened the sails, and rattled the blue tarp as, grunting a little, I pulled and pushed the body up from the hold. The tarp was filthy but I felt little repulsion as I laid it onto the low, long seat, hard on my knees, my arms around it as if to embrace it and show it the glorious scene in which we were performing our parts in this drama. I felt I could almost hear him talking to me, whispering, moaning, trumpeting in a low register like an elephant, but it was only the flap of sails, the wind against the sides.

This final burial would be worse than cremation, in its way. Maybe he knew he was going to lie on the frigid bottom forever, never decomposing, forever retaining a faint shadowy connection to one end of the spectrum of life. His dreaming flesh would be preserved indefinitely in the lake’s almost-freezing deep temperatures. There would be no release.

And if dreaming meant reexperiencing the events of life, he would not wish to dream forever.

The tarp unwrapped slightly at the top and I saw a clump of familiar brown hair. I propped myself against the open hatch to the tiny cabin and put out a gloved finger, touching the hair lightly. Something stirred within me even as I shuddered.

Then I hardened my stomach muscles, crouched, picked it up tarp and all, and tipped the reeking thing into the lake. The boat was at the deepest fractured depth of the lake, about sixteen hundred feet, the second-deepest lake depth in the United States.

Down there it would be utterly lightless.

As it sank, last blue on blue, I took out a small, soft, flattened leatherbound book from my pocket and read an old poem I had chosen for this occasion:

I didn’t feel like finishing. When I closed the book, I could no longer see anything over the side. I threw the book into the water, removed my gloves, leaned out over the lake, and washed my hands and face. The water cooled me.