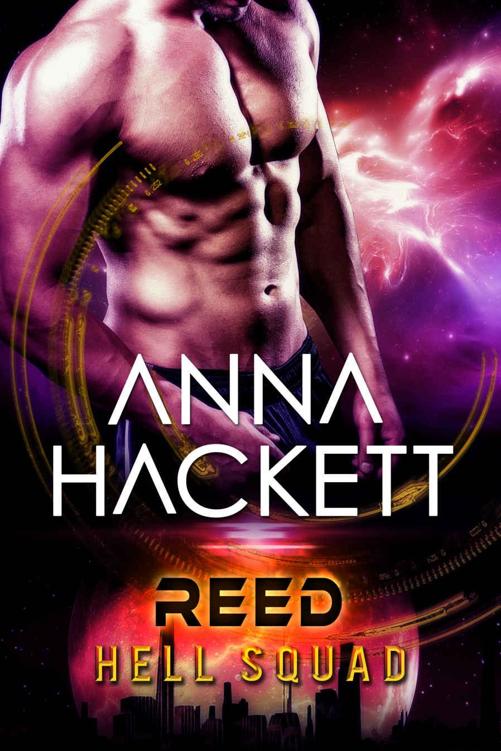 Cover by Melody Simmons of
eBookindiecovers

This book is a work of fiction. All names, characters, places and incidents are either the product of the author’s imagination or are used fictitiously. Any resemblance to actual persons, events or places is coincidental. No part of this book may be reproduced, scanned, or distributed in any printed or electronic form.

What readers are saying about Anna’s Science Fiction Romance

Read the first chapter of At Star’s End

What readers are saying about Anna’s Science Fiction Romance

“
At Star’s End
is a fun, thrill ride of a science fiction romance.” – Mstcat, Goodreads review

“An action-packed sci-fi adventure with some smoking hot sexy times, I highly recommend
On a Rogue Planet
.” – KatieF, Amazon Review

“High action and adventure surrounding an impossible treasure hunt kept me reading until late in the night.” – Jen, That’s What I’m Talking About, review of
Beyond Galaxy’s Edge 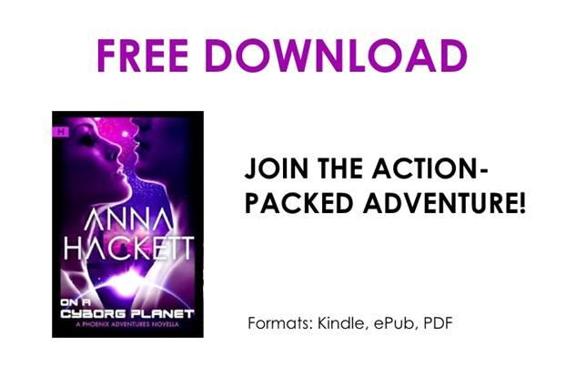 On a Cyborg Planet.

“Moving in on the target now.”

Reed MacKinnon kept his voice low as he murmured into his comms device. He crept forward silently on his belly, toward the edge of the roof of the ruined house.

Below, he heard a woman sobbing, a man shouting, and aliens snarling.

Carefully peering down, he saw the group of seven raptors towering over a human couple. The man and woman looked like they’d been on the move for a while. Their clothes were tattered and dirty, and they had a hungry, desperate look. And now they had aliens waving ugly scaled weapons in their faces.

Reed lined up his mayhem carbine. The weapon had a mini-missile launcher attached, but he wouldn’t need that right now. Through his scope, he stared at one of the dinosaur-like humanoid’s faces with its gray scales and red eyes. Nope, a good ol’ laser shot to the head would be enough.

He waited patiently for his squad’s leader to make the call. Reed couldn’t see his teammates, but he knew they were nearby somewhere. Shaw would be looking down the laser scope of his long-range sniper rifle. Claudia would be silently bouncing on her heels, ready to rush in. Gabe would be a ghost, hiding in the shadows with his big-ass combat knife in hand. Cruz would be steady and calm, waiting for Marcus’ command. And Marcus, he’d be gritting his teeth and pissed off, waiting for the right moment to hit these aliens and rescue the couple.

“Just leave us alone,” the man below yelled.

One seven-foot-tall raptor kicked out with a huge, booted foot. He caught the man in the chest, sending him sprawling in the dirt.

“Don’t!” The woman scrambled toward her partner, tangled blonde hair falling around her face. “You’ve taken everything. Our homes, our children, our planet. What more can you want from us?”

It was true. The raptors had come in their huge alien ships and annihilated almost all life on Earth. They’d ruined the cities, decimated most of the population, stolen resources. But there was more they could take. The real, hideous reason they were here. Reed’s gut roiled. Freedom was every man’s right, and these bastards had flown halfway around the galaxy to take humanity’s freedom away from them.

Reed stared down his scope. Well, these humans weren’t about to roll over and make it easy. The aliens were going to get a hell of a fight.

One raptor soldier snagged the woman by the collar of her shirt and dragged her toward the black, squat-looking vehicle covered in spiked armor plating nearby.

“Shaw, on my command, take out the patrol leader, then the alien next to him.” Marcus Steele’s gravelly voice rasped over the comm. “Reed, you take out the big bastard on the right. Gabe and Claudia, move in and take out the other three. Cruz, you can have the guy holding the woman. I’ll disable their vehicle and driver.”

Battle calm flowed over Reed. Another few tense seconds passed. The woman was screaming at the top of her lungs now and her struggling husband got a kick to the head for his attempts to help his wife.

A single laser blast and the head raptor fell to the ground. Damn, Shaw was a hell of a shot. Reed squeezed the trigger on his carbine and watched his target fall. Then there was an explosion of movement below as the rest of the team swung into action.

They were so good. Reed felt a flash of pride. He’d been a United Coalition Navy SEAL before the alien attack, and the men and women on his SEAL team had been amazing soldiers. He’d thought they were the best.

They came from a mix of backgrounds. Any surviving military members had been banded together into the squads that now fought back against the aliens occupying the ruins of Sydney, Australia—once the beautiful harbor capital of the United Coalition. The Coalition was the result of the amalgamation of countries like Australia, the United States, Canada, India and some European nations.

Now Sydney was just burned-out ruins, shattered beyond repair. He didn’t know about the other capital cities around the world, but it was a safe bet they were all in the same condition. He’d been on a diving vacation in Australia when the invasion hit. He’d spent months heading south to find what was left of the human military.

Reed watched Gabe move, faster than any human should be able to. The dark, intense man was a machine. He’d already taken down two raptors and beside him, Claudia—Hell Squad’s lone female soldier—jammed her carbine against a raptor’s chest and opened fire.

By the time Reed slid off the roof, the fight was over. Raptor bodies sprawled on the ground. Cruz was carrying a sobbing woman over to her husband, while Claudia checked the man’s injuries. All in a day’s work for Hell Squad.

Reed stared up at the sky. A thunderstorm was threatening on the horizon, lightning flashing in the dark clouds. Far in the distance, he saw red lights zipping across the sky, away from them, thankfully. It was a raptor ptero ship. He swung his weapon over his shoulder. He doubted the aliens would give up easily, but neither would the humans.

Reed would fight for his freedom, for the freedom of every person sheltering in Blue Mountain Base—a military base buried deep in the Blue Mountains west of Sydney—until the day he died. He knew what it was like to have everything taken from you—even your dignity. And in the past, he’d seen fellow soldiers who’d been taken captive and suffered atrocities beyond comprehension.

No one had the fucking right to do that to anyone.

His gut tightened. He’d watched one of the best soldiers he’d had the privilege of serving with be rescued from enemy hands…only to never fully recover, living a life rushing from one bad decision to another.

An image of huge brown eyes flickered through his head. He fought for her, too. For her to be free of the ugly memories of what the aliens had done to her.

Marcus’ harsh exclamation made Reed glance over. His boss stood at the rear of the raptor vehicle with its back door wide open.

The squad hurried over. Reed glanced in and his jaw went tight.
Fuck
.

Humans huddled inside. Some were unconscious, sprawled on the floor. Others clung to each other, staring with wide, frightened eyes.

Jesus, some of them were just kids. Reed’s hands clenched on his carbine. Fuck these alien invaders to hell.

“Get ’em out.” Marcus pressed a hand to his ear. “Elle, we have human survivors. Ten of them. Send the Hawk in to pick us up.”

Elle Milton’s smooth voice came over the line. Their comms officer was the last member of their squad. She fed them intel, raptor numbers and saved their butts when the fighting got too hot. She’d also taken on the mammoth task of smoothing out Marcus’ rough edges.

“And have Emerson and the medical team on standby when we get back to base,” Marcus added.

“I will,” Elle responded. “Come home in one piece.”

Reed caught a slight softening in the man’s scarred face. Looked like Elle was having some success. Their fearless leader was so in love with the classy, young woman. Reed felt his chest tighten. Must be nice to know you had someone waiting for you.

Reed looked up. For a second, he didn’t see anything, then he spotted a vague shimmer in the air—it looked like a heat mirage. The shimmer changed as the Hawk pilot turned off the quadcopter’s illusion system. The dark-gray copter rapidly descended to their location, its four rotors spinning. After its skids touched dirt, the soldiers began carrying the human survivors to the Hawk.

They loaded the shell-shocked people in, setting them in the seats, securing safety harnesses over them. As Reed helped the last person out of the alien vehicle—a slim, young man—he spotted something in the back. Something blinking. With a frown, he handed the man over to Shaw and climbed into the vehicle.

On the floor at the back was a small cube the size of his palm. It was black but glowed red intermittently. It looked a lot like the data crystals he knew the raptors used to store data. But the data crystals didn’t glow. He picked it up. It had some weight, but wasn’t very heavy, and it wasn’t hot.

Marcus stood outside, his tough form silhouetted by the sun.

Reed held up the cube. “What do you think this is?”

Marcus frowned. “Hopefully not something that explodes. Elle? Reed found some raptor tech. Sending an image through now.” Marcus yanked a camera off his belt and snapped a few shots.

Reed knew the drone Elle had hovering somewhere nearby would pick up the images and relay them back to base.

A moment later, Elle made a humming noise. “The pics are coming through now. Hmm, I think we’ve seen something like this before. Let me just check with Noah.”