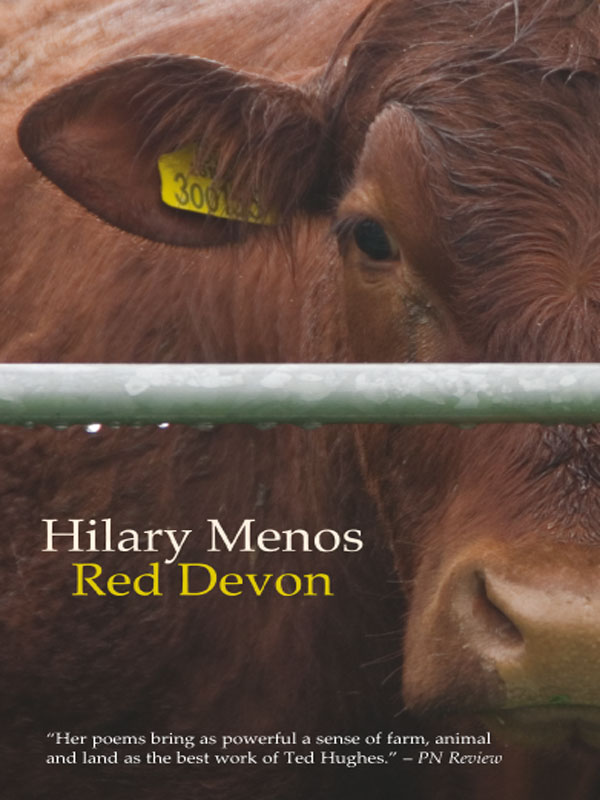 To organic farmers and smallholders everywhere

Seren is the book imprint of

The right of Hilary Menos to be identified as

the author of this work has been asserted in accordance

with the Copyright, Designs and Patents Act, 1988.

A CIP record for this title is available from the British Library.

All rights reserved. No part of this publication may be reproduced, stored in a retrieval system, or transmitted at any time or by any means, electronic, mechanical, photocopying, recording or otherwise without the prior permission of the copyright holder.

The publisher acknowledges the financial assistance of the Welsh Books Council.

The Great Hog Oiler Round Up

Once Upon a Time in the West

A Load of Old Bull

Portrait of the Artist as Venus Anadyomene

The secret of a good ley is a firm bottom

Winsome is sixteen today. She sprawls

while her sisters mill around and munch hay.

There's more than one way to skin a cow

but, this being Grunt Garvey, he will do it the one way

and sling her from the spike with webbing strops

It could all go wrong. I see her paddling the air,

the noose â which it is â too high, too low, or both

and, this being Grunt Garvey, things don't go to plan â

she proves to be quite the Houdini, although

it's rather more than two minutes thirty-six seconds

before she hits the straw with a wet thud.

Grunt goes for the JCB with the gap-toothed scoop

to shovel her up like chippings, or so much grain.

Of course it can't go wrong, but this being, etc.

she rolls in like a set of bagpipes with a low moan,

steam from her paunch soft-focussing her face

and more than a little damage to her tail bone.

Midday tomorrow, if she's not on her feet

(
on pointes
if you're chasing the extended metaphor)

the local knackerman will bring his gun

and attempt a short duet

before Winsome struts her stuff for the last time

along the tightrope of his winch and chain

into his tatty van. For those familiar with the charm

of a cow's final
fouettÃ©
,

this is a good time to look away.

* on pointes â
dancing on the tips of the toes

eager to please, eager to do his job,

partly because he is four days late

and the ewe dumped by the shed is on the turn.

Don't ask him what he knows,

John Teague, with his aura of flies,

one eye up the chimney, one eye down the pot,

leaving nothing but a damp stain on the road.

He knows the inside of a pig's mind.

To put his gun to the back of a ram's head.

How a cow falls to her knees as if in prayer

in this reverse nativity in a half-dark byre.

“You got livestock, you got dead stock,” hollers Grunt.

He slams the tailgate, waves Teague off the farm.

Stan from Stags has come to talk about forms

and how everyone's going to die of BSE.

In the kitchen Stan's telling Dad about New Variant CJD.

Grunt makes mugs of instant on the Rayburn.

Mum says she knows a man with a sponge for a brain.

but they must be proper mental in Kentucky,

eating road-kill varmints in a stew.

“A few ears short of a bushel,” says Stan,

“and five of them dead too.”

What sort of varmints, Grunt wants to know.

“Used to be squirrel or possum,” says Stan,

“but these days it's beef or lamb.”

we had that every week when we were young.”

“No wonder your brains are scrambled,” says Grunt,

and throws his slops down the sink.

That night they sit out, skimming stones on the slurry.

what happened to him?”

“We had a fight in woodwork once,” says Grunt,

“he tried to cut off my head with a junior hacksaw.

But he got diabetes and moved to Ugborough.

What goes around comes around.”

“After all that squirrel stew,” says Teague,

“reckon he's not coming round no more.”

* burgoo -
traditional North American stew made with whatever meat is available

One foot in the furrow, one on the grassed ridge,

listens as stonechats crack pebbles in the hedge,

counts on his fingers how thistles annex his land.

Dwarf thistles lurk in the couch, planning a raid.

Spotted thistles infest his set aside, their sly lobes

and pale flowers colonising his waysides.

nodding in the pastures, inching across his red loam,

crowding the shaled edge of the old quarry,

Blessed and bitter, cursed and holy, milk and melancholy,

lady's thistle, slender thistle, each and every one Grunt's bane.

When hell freezes over, he swears by three things.

Lard on the lips. Two pairs of socks. His wheelbarrow,

good on the steep when even the Ford won't grip.

This morning he opens the door to a clean sweep

right up to the dairy's cracked slate step, frost

but now it's taking the piss. Grunt glares at the snow

and it glares back. He kicks the water trough,

heels a hole through the ice. First floods, now this,

the daily round, in arctic sludge. Milk substitute

for the calves, a brick of pellets for the fowls.

He rolls out a silage bale in the cubicle house

and forks it to the cows, sets a can at the yard tap

drumming up chilly water for the dogs,

for the lambs in the barn, the fifty hogs on the hill.

A neighbour phones on the scrounge for a box

and a tow out of the ditch where he spent the night.

Grunt goes off to do what he does best â

apply excess force with a tool. He's back at noon

to fix a burst pipe, by which time two sheep

haven't moved for an hour, are past fixing.

Snow starts to fall as he toils up the slope,

hauls one sheep into the wheelbarrow,

picks his way down, then moils up again.

Grunt's not any sort of man.

But if he was, he'd be the sort

â if you were digging a hole â

not to sit back and watch the show

but to step up to the mark,

place his hand gently on your arm,

take your spade and offer you

the key to his digger. Mates Rates.

The fence between Pullheads and Hatchet came down,

each post rottener than the last, and both flocks together â

ewes, lambs, wethers â and there on the high ground

centre stage, the two rams squaring up to each other

each without armour or lance, just a curled helm

and the action between them unfolding.

the butt and buck and high kick, the gradual retreat

the old ram in the orchard earnestly thumping the trees

until small green apples pelt the barreners beneath,

and all from a standing start. So he's drinking his tea

and starting to think about getting the dogs

when a noise he associates most with a scaffold bar,

or a length of four by two, fractures the scene.

They stagger apart, each ram looking crossly around

for applause, perhaps, or a swift way out

or a “Cut!” from the director. But there is none.

So they back up and do it again, shoulder to shoulder,

and each one's nervous twitch sends the other

further up the field and a little further

until each backs up almost out of the frame

and they do it again, only better, and this time both

and the lights all dim, and the evening rolls on in.

Up at four to milk and the Dartmouth lights

glow yellow down the valley. Hay for the calves,

barley for the pigs and the yard to scrape.

Clouds of mist form with each breath.

He picks out lambs for market. Backs up the box

and shoves them in by hand. For once they're quiet.

Then out with the old plough bobbing behind.

Prayer for the Dead: A Detective Inspector McLean Mystery by James Oswald
Miracles and Massacres by Glenn Beck
A Memory in the Black (The New Aeneid Cycle) by Munz, Michael G.
Beauty's Beast by Amanda Ashley
The Lighter Side of Life and Death by C. K. Kelly Martin
The Five People You Meet in Heaven by Mitch Albom
Scorpion Shards by Neal Shusterman
Vampire Awakening by Eliza Gayle
Lord of Souls: An Elder Scrolls Novel by Greg Keyes
To the Edge of the World by Michele Torrey