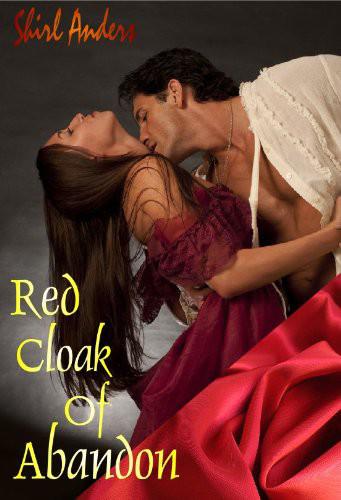 This story sets the ringleader of the Lady Rogues, Affinity, in sensual and dramatic pursuit of Lord Lawrence Fabier, the mystifying Duke of St. Martin. Law, whom is haunted by one tragic event in his past, which he now spends his life trying to atone for. He lives a hidden life as the, "Benefactor," of London’s prostitutes. His pursuits remain secret, as they must, until one woman starts asking questions about him.

Favorite Line: Law snorted. The woman was completely mad, yet her voluptuous body moving beneath his was waking his ardor again. Incredible! “So all this is simply because you find me attractive? You pry like a criminal into my life, break into my home, steal my possessions . . . And this is supposed to endear me to you?”
Affinity gasped, biting her bottom lip with that endearing crooked tooth of hers, and then she blurted, “Well you are here and-and, I want to do it again!”

© 2003 Shirl Anders. All rights reserved. No part of this publication maybe re-

produced, stored in a retrieval system, or transmitted in any form or by any

sion from the author.

This is a work of fiction. The characters, incidents, and dialogues in this book are

of the author’s imagination and are not to be construed as real. Any resemblance

to actual events or persons, living or dead, is completely coincidental.

“I didn’t do it!” Anne Fotts, the Redgrift house chambermaid cried.

uncommon entrance to her room. “I swear, Miss Affinity, on my dead

Affinity watched Anne sail toward her like a battleship stalwart on

its course. The little maid, embroiled in her histrionics was not going to

stop, Affinity realized as she dropped the quill pen. The bouncing pen left

another large blot on her letter, right upon the part where she had been

explaining to James about the new Brown Bess marksman rifles, then she

turned in her chair hastily, apparently thinking to catch the maid. How

unusual, Affinity thought, she could not remember the last time she had

her knees instead of hysterically embracing her. Anne’s dramatic suppli-

cation came to a halt at Affinity’s feet, with Anne clutching her skirts,

while tears streamed down her normally pleasant face. Not knowing what

else to do in her concern, Affinity patted one of Anne’s white knuckled

hands gripping her skirts. She peeped over her writing spectacles at Aunt

Fuchsia to see what effect this was having on her, but of course Aunt

softly while rocking in a chair by the window. Aunt Fuchsia could barely

believe Anne of stealing. Anne was as loyal as they came, and that was

implying a lot for a maid that was employed by her uncle, the frugal and

waspish Lord Redgrift. However, Affinity understood sadly that she held

matter such as this, or truths be told, in any other matters.

Yet, with her spine straight as she normally confronted life, she did

offer her loyalty. “I will never believe you stole a crumb of bread, dear

Anne. How could this come about?”

“It was
John
Hanson,” Anne sniffled with imploring eyes and a red

nose. “I would not take his advances and the evil bastard done this to me.

Lied, he did! So spiteful he was, saying I stole Lord Redgrift’s war

Affinity gasped, stealing herself as though her uncles’ vengeful

wrath were present in the room. John Hanson was more than merely

spiteful, if this were true, he was abominable. There was no greater prize

in all Lord Redgrift’s memorabilia than that medal. The entire household

would pay dearly for this act of malice, and poor Anne the worst.

“I demand that strumpet thief out of the household at once!”

Affinity flinched at her uncle’s bellowing coming from the foyer, as

Anne cried. “This will ruin me! I will never work again. I do not know

Suddenly, tromping feet sounded in the hallway, and two of the

way. Affinity acutely felt the invasion arrow down her spine as Anne

stood and she stood with her. The fact that she had to do something raced

through Affinity’s thoughts, yet the way to do so eluded her overturned

Then suddenly, she dragged the small opal ring she wore from her

Anne on either side. Affinity managed to close Anne’s fingers around the

room. It was her mother’s ring, one of only two pieces she had of her

mother’s legacy. But, she had so little herself to give, as she gasped, too

Early the next morning, Affinity was ashamed of herself as she

paced the oiled oak floorboards in her bedchamber. “I should have but

tried!” It mattered not that she had given dearly of what little she owned,

because she understood Anne’s dire fate. If only Anne had some family

of her own to fall back on. “And if only this were not so unfairly a man’s

Men controlled
every
event, every action and every woman in one

form or another. Too
no
good at all. It could be said that she was bias with

the horrible uncle that she was sacked with. However, at all turns in her

life it seemed that men thwarted her desired pursuits. For goodness sakes,

because of her gender, she was not allowed to read the very public

London newspaper. It was considered unseemly and unladylike that she

should even have the desire to do so. A lady, or any woman for that

matter, less prostitutes, she imagined, were not allowed to approach any

man of her interest in this partisan world.

“How
in the world will they know that I am interested in them, if I

am not
even
allowed to approach them?” The answer, of course, was to

wait for them to approach you, which was never going to happen as far

as she could tell from her first disastrous half season in London so far.

“And I really question how men ever won the first war, the ninnies!”

“My lady, I have gotten the address.”

“Mrs. Todd that is excellent,” Affinity said, turning to the Redgrift

cook standing in the open doorway to her bedchamber.

Mrs. Todd was a thin and pinched looking woman of undetermin-

able age, but with a secret heart of gold. “Yes, my lady, and I sent the

Affinity clapped her hands together, then reached for her gloves.

“Then, I shall go straight away, I will not want to miss her. I know I will

be able to find her a position with one of my friends soon. She must have

heart and I will relay that to her. Thank you, Mrs. Todd!”

Mrs. Todd’s gaze darted down the hallway, then back to Affinity, as

her voice lowered. “I have a small packet of food, Miss Affinity.”

Affinity whispered also. “Of course, Mrs. Todd, as much as you can

and should Aunt Fuchsia ask, just say that I am napping.”

pulled down from her jaunty walking hat beneath her chin more firmly.

It was not quite proper for her to be unescorted anywhere, much less the

park. However, for her mission it was necessary, and she really bristled

on the bits of societies constraints continually hemming her in. There-

fore, this was not the first time, nor would it be the last time that she

would move about unescorted as she wished. This being true, she strove

for the upright and confident carriage of a married lady about town. She

felt quite lucky to have an absentminded chaperone like Aunt Fuchsia. It

Yet, her stolid friends, Brevity, Caprice, and Diversity all seemed to

manage clandestine freedom from their various families when needed.

They were all young ladies, having met and formed a closely bound

group of friendship, while attending Lady Whitmore’s Academy for

Young Ladies. They had all received their letters of graduation from the

academy at the same time, and this year found them ensconced in their

material!” Affinity muttered as she came in sight of the rather pompous

bronzed statue of Lord Nelson atop a stallion.

Suddenly, the sounds of a dog’s sharp yelping came from Affinity’s

left, stopping her forward motion as she turned her gaze toward the

hurtful sound. She saw a gentleman, in great agitation, whipping the

coat of russet. Affinity yelped at the same moment that the dog did upon

receiving another cruel blow from the quirk, then she hastily found her

voice. “I say there! Is that
your
dog?” she cried, somewhat shrilly as she

marched toward the pair. She immediately saw the loose leash dangling

bushes and could not escape the angry nobleman.

“Away!” the elderly man shouted, raising his quirk again.

“Do
not
thrash him again!” Affinity cried, boldly running between