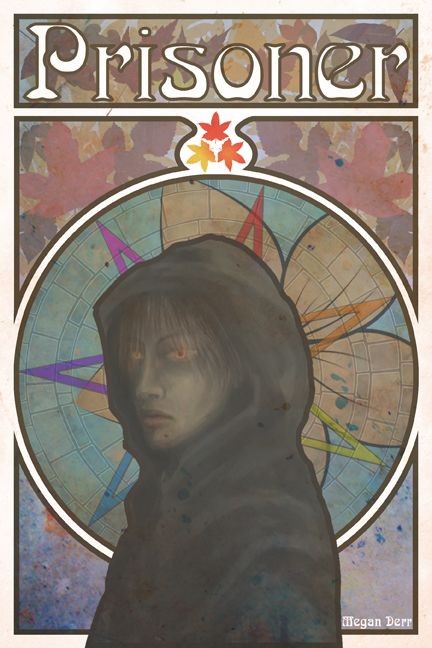 A man whom all men fear…

General Dieter von Adolwulf has led the Scarlet Army of Kria to victory for the past decade, holding the infamous field known as the Regenbogen against Kria's hated enemies—the deceptive Illussor and the ruthless Salharans.  War has waged between the three nations for longer than anyone can remember, but no one has held the Regenbogen as well as the notorious Wolf of Kria and his fearsome army.

A man who fears nothing…

Returning home at the end of the year, the Scarlet Army is attacked in the dead of night by a single man who manages to kill hundreds before he is finally captured.  A Salharan soldier with no name, no purpose but to kill, he refuses to bend to the Wolf who takes him prisoner and forces upon him a despicable Krian name.

A man with nothing to lose…

When the rest of his army is slaughtered by Illussor soldiers desperately seeking his prisoner, Dieter determines to hold fast—both for answers and in revenge for the men he lost. But answers and revenge are hard to come by when surrounded by secrets and treachery, and the man least likely to kill him is the prisoner who most wants him dead.

Published by Less Than Three Press

For Crown. For Country. For Sword.

Dieter scrubbed at his face, willing away his exhaustion. The chaos had finally ceased, and his men would shortly be bringing him the last irritant of the evening—the bastard Salharan who had managed to sneak into their camp in the dead of night and slay hundreds of men while they slept. He shoved strands of silver-touched black hair from his eyes, looking up at the dark gray sky. "Stupid bitch," he muttered under his breath. He snapped his head down at the sound of boots squishing in the muddy swamp that their camp had become. "What?" he barked at the private trying not to shake before him.

"Yes, Sir!" The private turned and beat a retreat. Dieter noted that if the men had moved half so fast earlier, more of them would have lived. It would seem the new recruits were still sorely in need of training. That would be dealt with in a fortnight when they reached the Winter Palace.

He glared once more at the dark sky. "The Winter Princess has sunk her claws deep this season." A few of his officers, gathered to give their reports, muttered soft agreements. Dieter's next words were prevented by the sound of shouting and scrabbling and words spoken in a language usually foreign to their camp. A moment later four men came crashing into the circle, three of them falling to the ground as they reached Dieter.

The prisoner remained standing, sneering contemptuously at the soldiers who had failed to control him. Dieter stepped forward, grabbed the prisoner by the scruff of his shirt and swung a hard fist into his stomach. The prisoner collapsed, groaning in pain, but he did not pass out. "That's more like it. Now," he glared at his men, "Start talking."

The first soldier nodded, fumbling to straighten his hat as he snapped to attention. "This is the man who led the ambush, General. The others are all dead."

Unadulterated hate clouded the prisoner's face as he looked at Dieter. Dieter ignored him. "How did he manage to take us so unawares?"

"We don't know, General." The second soldier started to shrug then realized what he was doing and froze.

Dieter stared at the prisoner through hooded eyes. The man gave the word "filthy" all new meaning. His military breeches were so covered in muck and grime it was impossible tell their original color. His hair color was similarly difficult to determine for the filth. He had lost his military jacket, making his rank impossible to determine, and his shirt was little more than scraps of cloth barely clinging to his form. But beneath the rags and the mud, muscle rippled and tensed as he strained against the ropes wound down his arm and locked tightly around his wrists. This was no lazy soldier scraping by on the pity of the gods.

Of course, the fact that he had killed a hundreds of Dieter's best had proven that. "Do you have a name, Prisoner?" He noticed, almost idly, that the man's amber eyes turned bright gold in anger.

"Prisoner is good enough for you," the man spat. "You may as well kill me because I'll not tell you a thing."

Dieter smirked. "That remains to be seen." His gaze hardened as he looked at his men. "Do we know anything about him?"

"He lost his jacket struggling against us, but it had the marks of a lieutenant." The third soldier spoke quietly, as if he sensed Dieter would be displeased and was hoping to escape detection.

Had Dieter felt like moving, he probably would have backhanded him for acting so weak. His vision misted with rage. "A lieutenant; the best of my Scarlet is dead now because of a polluted lieutenant?" Dieter contemplated landing a few blows, but decided it was not worth expending what energy he had left. "Get out of my sight, all of you. Rest while you can, because tomorrow you're going to wish the Autumn Prince had taken you away!"

Breathing heavily with rage, Dieter grabbed a fistful of the prisoner's filthy hair and forced his head up. "How did you kill so many of my men?"

"I'm polluted, remember?" The prisoner sneered in contempt. "A little pollution is all I need to kill filthy Krians."

Dieter swung out, punching him hard in the gut. The prisoner crumpled to the ground and lay still. Using one booted foot, he shoved the prisoner until he lay flat on his stomach. Crouching down, he examined the ropes that bound him. It would not do to injure him overmuch until they could determine a suitable punishment. Simply killing him would not suffice. No. This one would pay. Grimacing at the layers of Gods only knew what covering him, Dieter shoved away dirt and scraps of cloth to ensure the prisoner had not suffered serious injury.

His explorations uncovered a strange, unnatural mark at the small of his back. Dieter frowned and wiped away more of the grime, breath hissing between his teeth when he realized what he had uncovered.

Seven thin triangles, shaped around a circle to form a stylized star. Five of the triangles were filled in—violet, indigo, blue, green and yellow. Two triangles and the central circle were outlines. Dieter was torn between annoyance and glee. "That would certainly explain how a mere lieutenant managed to kill so many of my men." Rising to his feet, he called for his Chief of Staff and began barking orders.

"After all the trouble you've caused," Dieter folded his arms across his chest, "it's good to know you're worth a ransom."

The prisoner shook his head, but said nothing. His arms had been chained to the ground behind him, forcing him to sit always slightly tilted back so that the chains wrapped around his neck and down his arms did not choke him. "They will pay nothing for me."

"If you are going to lie, Prisoner, then at least tell a good one. I know a Seven Star when I see one, and I know they will be eager to get you back." Dieter unfolded his arms as an attendant approached with a steaming cup of tea. "But tell my why a Brother of the Seven Star was made a mere lieutenant? Did they think that would keep you from being detected?"

Amber eyes regarded him with hot rage, but it was not the bright gold that Dieter had seen before. The prisoner was growing weaker by the hour, and the strain had dulled his bright eyes. Dieter realized he almost felt disappointed. "They thought it would get me killed sooner."

"Not very intelligent of them," Dieter said with amusement. He took a sip of his dark tea, deciding to play along with the prisoner. "Why not simply kill you themselves?"

This time the eyes did turn gold, though only for a moment. Then the prisoner sneered. "Do not think you'll get any information from me."

Dieter smirked. "Think you I need such information from you? The Brotherhood of the Seven Star, the most polluted men in all of Salhara." He knelt to look the prisoner in the face. "Always before they have been leaders, men of power, not mere lieutenants—unless of course we are wrong about your rank."

The prisoner made a motion that would have been a shrug had he been unbound, "I am a Lieutenant, or was."

"Nor did you use the sort of pollutions to which I am accustomed." Typically, Salharans used a wide variety of small pollutions and simple spells instead of wasting the necessary drugs on larger, more complicated spells. Yet this one had used those harder spells.

The prisoner gave a vicious smile. "If I'd done that, you would have been able to defend yourselves."

Dieter narrowed his eyes, sorely tempted to backhand him. He rose to his feet. "You're only alive because of my orders."

Giving another of his awkward shrugs, the prisoner tossed his head to stare him in the face. "You'll be killing me soon anyway. What do I care for your threats?"

"My threats are not made idly," Dieter said. "Once the ransom is paid, you will suffer greatly for what you've done."

The prisoner threw his head back and laughed, the sound of it bitter and half wild. "Then I guess I have nothing to fear at all." His eyes were dampened gold. "Never will they pay a ransom for me."

Dieter crushed the missive in one large fist, glowering at everyone and everything within his sight. The soldiers fled, each fearing they would be the one to take the brunt of their general's anger. The prisoner laughed at him, though he did not sound happy so much as bitterly amused. "I told you so."

"Be silent, Prisoner, unless you would care to explain to me why your Brothers do not desire your safe return."

"They would rather die than call me Brother." The prisoner slumped over in his chains, no longer seeming to feel the pain caused by his long hours of awkward confinement.

Dieter buried his hand in the prisoner's filthy hair and yanked his head up. "Then what am I to do with you?"

"No, I think not. All the trouble you've caused, death is too kind a measure." Dieter released him, scowling as he thought.

"General!" A lieutenant approached, touching his right shoulder with his left hand in salute as he snapped to attention. "We are ready to depart."

"Have the prisoner secured to my horse."

"Yes, General!" The lieutenant saluted again and barked orders to several nearby grunts.

Several minutes later, Dieter mounted his horse and sneered down at the man chained to the pommel. "I hope you can keep up, Prisoner. If you fall, I will not help you up."

Call Of The Flame (Book 1) by James R. Sanford
Complete Works, Volume IV by Harold Pinter
Honey and Smoke by Deborah Smith
The Girl Who Played Go by Shan Sa
The Hare with Amber Eyes by Edmund de Waal
Stitches In Time by KATHY
Sacred by Elana K. Arnold
Lost Past by Teresa McCullough, Zachary McCullough
The Outcast Highlander by R.L. Syme
The Strings of Murder by Oscar de Muriel