Pip: The Story of Olive 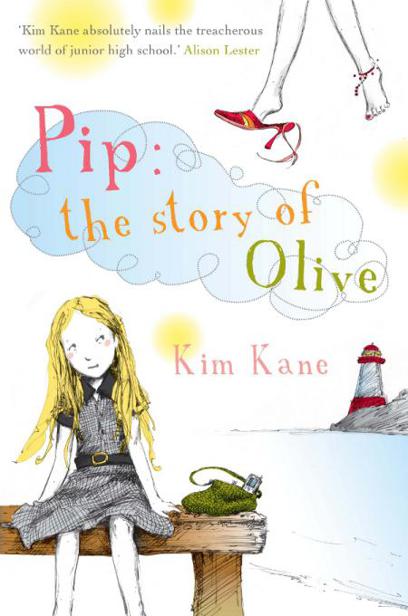 ‘Kim Kane absolutely nails the treacherous world of junior high school. I love Olive’s thoughts and how she is in the world.’

‘A gem of a novel! Poignant, funny and blissfully unsentimental, it reminds us that children live with risk and sorrow every day. Kane understands what it’s like to be standing on the outside looking in, and her ruthless depiction of the pecking order in a girls’ school is both hilarious and startling in its honesty. She treads lightly over the jagged rocks of childhood, and writes without patronising or underestimating her readers. Every perfectly chosen word and witty turn of phrase is a compliment to them.’

All rights reserved. No part of this book may be reproduced or transmitted in any form or by any means, electronic or mechanical, including photocopying, recording or by any information storage and retrieval system, without prior permission in writing from the publisher. The
Australian Copyright Act 1968
(the Act) allows a maximum of one chapter or ten per cent of this book, whichever is the greater, to be photocopied by any educational institution for its educational purposes provided that the educational institution (or body that administers it) has given a remuneration notice to Copyright Agency Limited (CAL) under the Act.

One face, one voice, one habit, and two persons;
A natural perspective, that is, and is not.

7.
The Twenty-second Day of the Month

23.
A Hobbit, but a Talented Hobbit

25.
Tripping through the Garden State by Rail and Road

28.
Edges That Would Never Be Straight

Olive Garnaut looked ever so slightly like an extraterrestrial: a very pale extraterrestrial. She had long thin hair, which hung and swung, and a long thin face to match it. Her eyes were pale green and so widely spaced that if she looked out of the corners of them she could actually see her plaits banging against her bottom.

Olive’s eyelashes and eyebrows were so very fair that they blended right into her forehead and people could only spot them if the sun caught her at a strange angle. When she stood, her feet turned out at one hundred and sixty degrees (like a ballerina in first position), and her shins were the exact colour of chicken loaf.

It went without saying that Olive was the most peculiar-looking girl in Year 7. But what happened to Olive Garnaut was not because she looked ever so slightly like an extraterrestrial, even a very pale one.

‘Yer mum go and bleach yer, did she?’ said the baker every time Olive went to buy buns. ‘Those arms’d burn in two minutes at the beach.’ The baker always laughed and Olive always flushed puce to her hair roots.

Olive liked to buy buns six at a time, even though she knew that five would probably be tossed into the compost after they had gone splotchy in the breadbin. Olive liked the baker to think that she might just be collecting buns to take home to a family full of children and noise, a family like Mathilda Graham’s.

‘Mrs Graham doesn’t buy her buns, she bakes them, and she certainly doesn’t let them go green in the breadbin,’ Olive would mutter near Mog.

‘How else would penicillin have been invented?’ Mog would respond (nursing a gin-and-tonic headache and willing to embrace mould). Mog was Olive’s mum, and Olive called her Mog because that’s the sort of family they were. But Olive called her ‘Mum’ at school – the same way she sometimes made her own sandwiches, rather than buying them from the tuckshop, and then pretended that Mog had prepared them instead. Olive would say, rather too loudly, ‘Gross, Mum’s given me cheese ’n’ gherkin spread again.’ Nobody took much notice – except Mathilda, who knew but didn’t say anything. Mathilda Graham was Olive’s best friend. Olive liked Mathilda; Mathilda liked tuck lunches.

Mathilda was one of the only friends Olive had ever brought home. Olive lived ‘out in the sticks’ (or so Mathilda’s mum grumbled when she dropped Olive off). While Mathilda could walk to school, Olive faced a three-tram ride or a taxi. But it wasn’t just distance that made Olive reluctant to bring anybody home.

Olive and Mog rattled around in a ramshackle house with five bedrooms, a drawing room, a sitting room, a morning room, two studies, a billiard room, a cellar, a scullery, and a room with no name that had bars on the windows because the family before them had collected stamps. The house was right near the sea and was Federation in style, which meant that it was built when Australia became a nation of states and women wore whalebone in their singlets to make them look thin. Mog always complained that it hadn’t been touched since.

Mog liked the idea of living in a magazine house, but she didn’t have the time to be neat or the patience for interior decorators. ‘This home may look as weary as I feel, but it’s got good bones,’ she’d say. ‘Besides, I have better things to do with my time than discuss whether the kitchen would look more “of the minute” painted in butter-yellow or clotted milk.’

Olive rather fancied the idea of their house with butter-yellow or clotted-milk walls. It would be like living in a cream tea, she thought. It could only be better than cobwebs and stains.

While Mog did not have time for interior decorators, she did have time to look in junk shops. On special weekends, when Mog wasn’t working, Olive and Mog travelled through the country in a hire car with a driver, trawling through second-hand shops, eating tarts and searching for gems with jammy fingers. Mog swore that she would strip the gems and turn them into something new and stylish, but they both knew, somewhere not too deep down, that she never would. Consequently, Mog and Olive had a real Coolgardie safe with torn flywire; a ‘Leading Lady’ hairdryer; seventies dolls with nipped waists; and champagne saucers with bubbled glass, which they always meant to stack into a pyramid just like in an old Grace Kelly movie.

Perhaps their most beautiful find was the Brass Eye – an antique marble, about the size of a bubblegum ball, tucked into the tip of a hollow metal stem. It was slightly longer than a lipstick and looked like a tiny squat telescope. Mog and Olive had bought it in a shop on the goldfields from a man with a tic that made him wink.

Olive kept all of the golden bits on the Brass Eye polished with Brasso and an old tennis sock. It rattled as she rubbed it. When Olive looked through the stem of the Brass Eye, the light refracted and everything appeared in triangles and circles. If she moved towards an object, Olive could see it spliced into hundreds of pieces; if she moved away, the object shot outwards, exploding from pinpoints like choreographed fireworks or synchronised swimmers. Olive liked to point the Brass Eye at her shoes and watch as her T-bars doubled, quadrupled and then octupled while she pulled back slowly, until they finally ignited in a dazzling jumble of school socks and silver buckles.

‘But how
does
it work?’ Olive asked Mog again and again.

‘It’s all smoke and mirrors, Ol,’ Mog said. And, as a child, Olive had imagined that the stem of the Brass Eye rattled because it was filled with tiny mirrors and little Indians who burnt wet matchsticks and wafted smoke along the brass tube; brassy smoke to multiply Olive’s school socks and T-bar shoes.

Unfortunately not everything was as beautiful as the Brass Eye. When Mog and Olive returned home from their junk-hunts, Mog would put the stuff down wherever there was space – and there it would usually stay. Much to Olive’s shame, the house was crowded with mountains of crap-knacks and clutter that lined the hall and cast shadows in dank piles. The piles were so high in places that she couldn’t see over them, and the dust made her wheeze. Nobody at school had to live in bedlam like that.

Minor in Possession by J. A. Jance
Finding Mary Jane by Amy Sparling
The One For Me - January Cove Book 1 by Hanna, Rachel
Kill Crazy by William W. Johnstone
Vengeance: The Niteclif Evolutions, Book 3 by Denise Tompkins
Rise of Keitus by Andrea Pearson
Belmary House Book One by Cassidy Cayman
Rogue Command (The Kalahari Series) by Marshall, A J
The Boy Who Was Raised as a Dog by Bruce Perry
Chaos in Mudbug (Ghost-in-Law Mystery/Romance Series) by Jana DeLeon