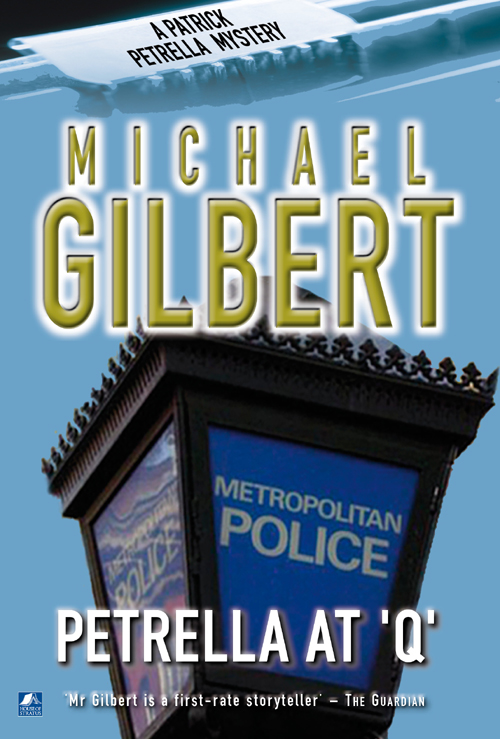 The right of Michael Gilbert to be identified as the author of this work has been asserted.

This edition published in 2012 by House of Stratus, an imprint of

This is a fictional work and all characters are drawn from the author’s imagination.

Any resemblance or similarities to persons either living or dead are entirely coincidental.

Born in Lincolnshire, England, Michael Francis Gilbert graduated in law from the University of London in 1937, shortly after which he first spent some time teaching at a prep-school which was followed by six years serving with the Royal Horse Artillery. During World War II he was captured following service in North Africa and Italy, and his prisoner-of-war experiences later leading to the writing of the acclaimed novel
‘Death in Captivity’
in 1952.

After the war, Gilbert worked as a solicitor in London, but his writing continued throughout his legal career and in addition to novels he wrote stage plays and scripts for radio and television. He is, however, best remembered for his novels, which have been described as witty and meticulously-plotted espionage and police procedural thrillers, but which exemplify realism.

HRF Keating stated that
‘Smallbone Deceased’
was amongst the 100 best crime and mystery books ever published.
"The plot,"
wrote Keating, "
is in every way as good as those of Agatha Christie at her best: as neatly dovetailed, as inherently complex yet retaining a decent credibility, and as full of cunningly-suggested red herrings."
It featured Chief Inspector Hazlerigg, who went on to appear in later novels and short stories, and another series was built around Patrick Petrella, a London based police constable (later promoted) who was fluent in four languages and had a love for both poetry and fine wine. Other memorable characters around which Gilbert built stories included Calder and Behrens. They are elderly but quite amiable agents, who are nonetheless ruthless and prepared to take on tasks too much at the dirty end of the business for their younger colleagues. They are brought out of retirement periodically upon receiving a bank statement containing a code.

Much of Michael Gilbert’s writing was done on the train as he travelled from home to his office in London:
"I always take a latish train to work," he explained in 1980, "and, of course, I go first class. I have no trouble in writing because I prepare a thorough synopsis beforehand.".
After retirement from the law, however, he nevertheless continued and also reviewed for
‘The Daily Telegraph’
, as well as editing
‘The Oxford Book of Legal Anecdotes’
.

Gilbert was appointed CBE in 1980. Generally regarded as ‘one of the elder statesmen of the British crime writing fraternity, he was a founder-member of the British Crime Writers’ Association and in 1988 he was named a Grand Master by the Mystery Writers of America, before receiving the Lifetime ‘Anthony’ Achievement award at the 1990 Boucheron in London.

Michael Gilbert died in 2006, aged ninety three, and was survived by his wife and their two sons and five daughters.

When the first of these stories was written there was no Q Division of the Metropolitan Police Area. Recently an extra Division has been carved out on the north-west outer perimeter and awarded this letter. It seemed to me that since there could be no possible confusion between this Division and the Division in which Detective Inspector, (later Detective Chief Inspector), Petrella was operating during the year described in this book, I would leave it. I need hardly add that no reference is intended to any actual police officer or other person in either Division.

When Lieutenant of police, Gregorio Petrella married Mirabel Trentham-Foster, their acquaintances were more than surprised; they were positively aghast. They predicted disaster, rapid disillusionment and separation. The two persons concerned confounded these prophets. They lived together in love and amity, and have continued to do so until this day.

The use, in the previous sentence, of the word “acquaintances” rather than “friends” was deliberate. Both of them were solitary by nature. This may have helped to cement their happiness. When two solitary-minded people find each other, their union can be very firm.

At the time of his marriage, Gregorio was a lieutenant in the political branch of the Spanish police, the equivalent, in England, of the Special Branch. It would scarcely be an exaggeration to say that he spent most of his working life keeping General Franco alive. He carried out his duties efficiently, not out of any love of El Caudillo, or even of any particular sympathy with his policies, but because it was his job, and one which he was technically well equipped to do.

For one of Gregorio’s particular accomplishments, uncommon in a Spaniard, was that he was a linguist, bilingual in Spanish and French, competent in Arabic and English. This was useful since most of the hopeful conspiracies aimed at the removal of the head of the Spanish State had their origins abroad. A lot of his work took him into the country of the Basques and across the Pyrenees into Southern France.

Sometimes he went farther afield; to Tangiers, to Sicily and to Beirut. It was in Egypt that he found Miss Trentham-Foster. She was attempting a painting of the pyramids.

She had already torn up three versions in disgust and said to the friendly young Spaniard who had been watching her, “They all look so damnably conventional.” Gregorio considered the matter, and said, “Might it improve them, if you painted the pyramids lying on their sides? Or even upside down?”

They were married three months later. Patrick was their only son. His upbringing accorded with his parentage. For the first eight years of his life in Spain (a country democratic with children, rigidly autocratic with adults), he spent his time running around with other boys of his own age from all classes of the community, learning things which horrified his mother as much as they amused his father. On his eighth birthday, she put her small foot down. Coming as she did from an English professional family, she had irreversible ideas about the proper education of male children. Captain Gregorio saw that Mirabel’s mind was made up and gave way. His pay was not large, but fortunately there was family money on both sides. Prospectuses were sent for. The rival claims of different preparatory schools were carefully examined and the small Patrick was launched into the traditional educational system of the English middle and upper class.

With such an upbringing, he might have found it difficult to adapt himself to boarding-school life, and it is reasonable to suppose that he was, to start with, fairly miserable; but there were factors in his favour. His temperament was, for the most part, sunny and equable. On the other hand, when he lost his temper, he lost it thoroughly; and he knew how to fight. He had not altogether wasted his time with the small
banditti
of the slums of Madrid. His methods might be unorthodox, but they were effective.

By the time that he stepped off the other end of the educational escalator at the age of seventeen, there was nothing except the jet blackness of his hair and a slight darkness of his skin to distinguish him from any other public schoolboy.

At this point his father took a hand, and Patrick went, first to the American University in Beirut, where he learned to speak and read Arabic; then to a college of rather peculiar further education in Cairo, where he learned, among other things, how to pick locks.

His own ambitions had hardly changed since the age of eight. On his twenty-first birthday he joined the ranks of the Metropolitan Police as a constable. A slight difficulty, arising out of the question of his nationality was overcome through Colonel Gregorio’s personal friendship with the then Assistant Commissioner. After he had completed his training at Peel House, Patrick’s first posting was to the North London Division of Highside, and it was about his experiences here that the first stories were written.

It will be appreciated that the protagonist of a fictional series differs in a number of respects from his counterpart in real life. He is not born; he springs into being, mature, competent and armed at all points to deal with the first problem his Creator has seen fit to face him with (“Oh, damn!” said Lord Peter Wimsey at Piccadilly Circus. “Hi! driver”.) Such autogenesis had its dangers, even for so meticulous a plotter as Miss Sayers. A whole literature has sprung up in an attempt to reconcile the details of the earlier life of Sherlock Holmes and Doctor Watson.

There is an equally important matter which afflicts real and fictional characters alike: the matter of growing older. If Hercule Poirot really had retired from the Belgian Police Force in 1904, how old was he on his last appearance?

It may be true that readers, on the whole, care little for these niceties. For them, their favourite characters live forever in a fifth dimension where time does not wither nor custom stale. It is, however, worth noticing one point. Just as people believe that exterior circumstances occurring at the time of a child’s conception (a period of happiness, a sudden shock, the conjunction of the planets or the phases of the moon) can affect the infant’s character thereafter, so can quite trivial occurrences on the occasion of his first public appearance affect, for better or for worse, a character destined for a long fictional life.

The fictional Patrick Petrella was conceived in church. The moment of his conception is as clearly fixed in my mind as though it had happened yesterday, not twenty-five years ago. It was a drowsy summer evening and the preacher had reached what appeared to be only the mid-point of his sermon. It was not an inspired address, and I turned, as I sometimes do in such circumstances, to the hymn book for relief. It opened on the lines of Christina Rosetti,
“Who has seen the wind? Neither you nor I. But when the trees bow down their heads, the wind is passing by.”
A commonplace thought, given great effect by the rhythm and placing of the words. Then—
”Who has seen the wind? Neither 1 nor you. But when the leaves hang trembling, the wind is passing through”.

Cam - 04 - Nightwalkers by P. T. Deutermann
The Man in the White Sharkskin Suit by Lucette Lagnado
Sausage by Victoria Wise
Love Stinks, Inc., an Uncollected Anthology story by Reed, Annie
Away From the Spotlight by Tamara Carlisle
Syncopated Rhythm by Schubach, Erik
Prince of Hearts by Margaret Foxe
The Last Girl by Stephan Collishaw
The Guardians by Ashley, Katie
Nice Girls Don't Ride by Roni Loren