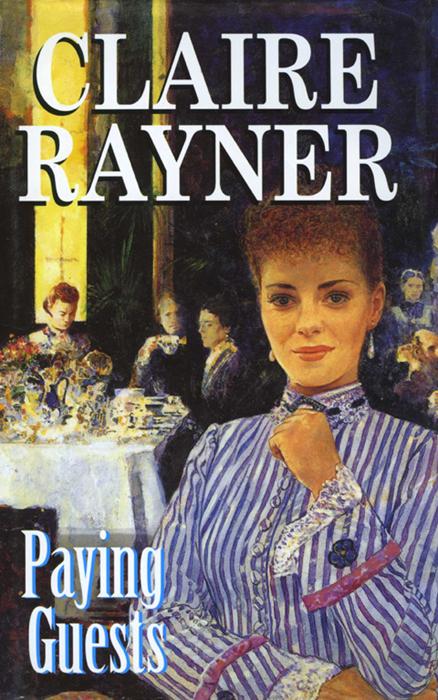 The sequel to "London Lodgings". Tilly Quentin has successfully turned Quentin's into a thriving guest house. But with the demanding guests, particularly the handsome Silas Geddes, and her beloved son, Duff, falling into unsuitable company, her problems are not over.

Without limiting the rights under copyright reserved above, no part of this publication may be reproduced, stored in or introduced into a retrieval system, or transmitted, in any form or by any means (electronic, mechanical, photocopying, recording or otherwise) without the prior written permission of both the copyright owner and the above publisher of this book

For Geoffrey Ring. With gratitude.
For making assurance doubly sure.

‘HOW MUCH?’ TILLY QUENTIN said and stared at the man on the other side of her little desk with horror. ‘How much did you say?’

‘Sixty-five pounds all together,’ Mr Collins said with gloomy relish. ‘Twenty guineas to Colonel Nichols for sundry items of gentleman’s tailoring, fifteen to Jerrison the jeweller in Brompton and the rest to various merchants in Kensington. I fear that you are liable, Ma’am.’

‘I liable for those debts as well as the more direct ones to me?’ Tilly was wrathful. ‘How can that be? Is it not enough that he mulcted me of seventeen guineas for his rent and board? Why should I have to take on the burden of these other debts as well, and –’

‘I am afraid he used your name as guarantor, Ma’am, and that was why he was accepted as a customer so readily. I dare say you could indeed refuse to pay on the grounds that he acted criminally in not consulting you and obtaining your consent, but I am not sure that this would be wise. It would cost you far more in goodwill and reputation than it would save.’ The lawyer shook his head dolefully and stared at her for all the world, Tilly found herself thinking crossly, like a mournful dog with his red-rimmed eyes and shaggy head of grey hair. She could have shaken him in her frustration, but instead she took a deep breath and tried to compose herself.

She had to face the fact that once again she had been baulked in her plans. Running Quentin’s Guest House was not, as she had once
fondly imagined it would be, a matter of simplicity. Two lady schoolteachers had been her financial salvation long ago when, as a young widow with an infant son to support, she had first taken paying guests. The thought of opening her home to strangers had been repugnant, but at least it had been an answer to her problems. Now, seventeen years later, when she had managed to add the adjoining premises to her original establishment and make the pair of high-fronted terraced houses into a harmonious whole by means of judicious rebuilding and rearrangement of the interior, it should have been much easier. All she had to do was let her twenty rooms, provide care and food for the various people who occupied them and tuck away into the bank the money she earned to build a snug fortune for her dear son, Duff, now so close to leaving school and embarking on adult life.

But over and over again, matters failed to proceed as smoothly as they should. There had been the time when, owing to the widespread building work being done in the neighbourhood, together with the construction of new sewers and water supply pipes, a section of Quentin’s back garden had fallen into a crater and the cost of shoring it all up again and replanting the garden had been considerable. She had found herself liable for that because she had neglected to supply herself with adequate insurance cover. Then there had been the matter of the drains, which one resident had insisted had been the cause of her severe attack of fever five winters ago, and which had needed costly repairs, not to speak of the constant expense of painting the exterior of the building and keeping the interior as handsome as persons paying as much as three guineas each week for their rent had a right to expect. And now this! In spite of paying a sizeable sum in insurance premiums each year to protect her establishment from the sort of depradations she now realized were horridly commonplace for even the most careful and hard-working of proprietresses, she had to face yet another loss.

She lifted her head and looked at Mr Collins. ‘Could I not claim this loss from the insurance company, Mr Collins?’ she said hopefully. ‘After all, I pay considerable sums for their protection and –’

‘No, Ma’am.’ He shook his head regretfully. ‘It was decided, do
you not recall, that the cost of paying for such cover would be prohibitive. No one can guard against wicked dishonesty. I suggested to you then that the only way of guarding yourself against unscrupulous persons of Mr Greenwall’s sort was to insist that your guests pay you in advance rather than in arrears.’

She shook her head, her old stubbornness rising in her. ‘No, sir, that I cannot do. These are my guests, remember, and I wish them to feel that they are – that they are more than mere customers. In none of the shops from which I buy my necessaries do I have to pay before I receive the goods – it is my right, after all, to be sure that I am suitably supplied before I agree to pay. I cannot treat my guests in a less honourable manner. I am sure you will agree.’

‘Then you must take your chances, Ma’am, that one of them will cheat you as Mr Greenwall did, running off in the middle of the night.’ He said it with an air of self-satisfaction that made Tilly’s hackles rise, but she did her best to control it. He spoke only the truth, after all. He had, she remembered, tried to warn her that people might cheat her, and she had dismissed his lugubrious words almost airily. She would choose her guests with such care that it could not happen, she had told him. And now look at what had happened!

Though she had to be fair; this was the first time she had suffered the experience of having a guest sneak off, complete with luggage, leaving a sizeable bill unpaid. He had requested only three weeks ago to change his arrangements from paying at the end of each week to paying monthly and since he had been her guest for almost six months, and she had found him agreeable (he had been a good-looking young man and full of wit and Tilly enjoyed the company of amusing people), she had stifled any doubts she might have had and agreed. And now she had paid for her own trusting heart.

She got to her feet in a flurry of dark green sarsenet, pushing her skirts to one side with a pettish gesture, finding some relief of her irritation in the physical action, and he stood up politely and bowed in a vague sort of way.

‘Is there nothing more, Ma’am?’

‘Since you are so adamant that nothing more can be done to
recompense, then I suppose not,’ she snapped and then softened as the old man blinked at her. ‘It is not your fault, Mr Collins. I should not be so – well, I am sorry.’

‘It’s understandable,’ he said. ‘None of us likes to be cheated.’ He sighed then. ‘It is so difficult to find the right people to deal with, is it not? Here I am, well ripe to step back a little, and take some ease as I grow older – I am past seventy, you know. Oh, yes, seventy. You must not look so surprised, for although I am hale and hearty, I was born in the last year of the old century, indeed I was – 1799, that was my birth year, and I am not ashamed to say so!’

Tilly, who had not been at all surprised, for she had always regarded him as exceedingly elderly, composed her face and tried to look impressed.

‘Indeed, sir, I would never have thought it,’ she said politely.

‘Well, there you are, you see, there you are! Healthy living and a tranquil life, that is what does it. But what was I saying? Oh, yes – as to being cheated – I have been looking for some time now for a new young lawyer to work with me and take some of the burdens from me, since my son was lost to me you know, yes, lost in the Chinese wars, and he but a young man, but there you are, you see – as I say here I have been searching for a new young lawyer to work with me this many months and no success have I had of it, for they are all only interested in lining their own pockets, don’t you know, and that is not the idea at all, no indeed. So I –’

Tilly, who had enough problems of her own to think about, interrupted the flow of language crisply.

‘I well understand the problems you have, sir, as well as I understand my own. You tell me that there is no possibility of insuring against any such future losses as this Greenwall one?’

‘It would be very costly,’ he said heavily, a little sulky at having been treated so by such a chit of a girl; Mrs Quentin she might be, but not a day over thirty, he’d be bound. And then he remembered about the boy being seventeen and amended it in his head; she must be thirty-five, but she looked little more than a chit. And she should have had better manners than to interrupt him as she had.