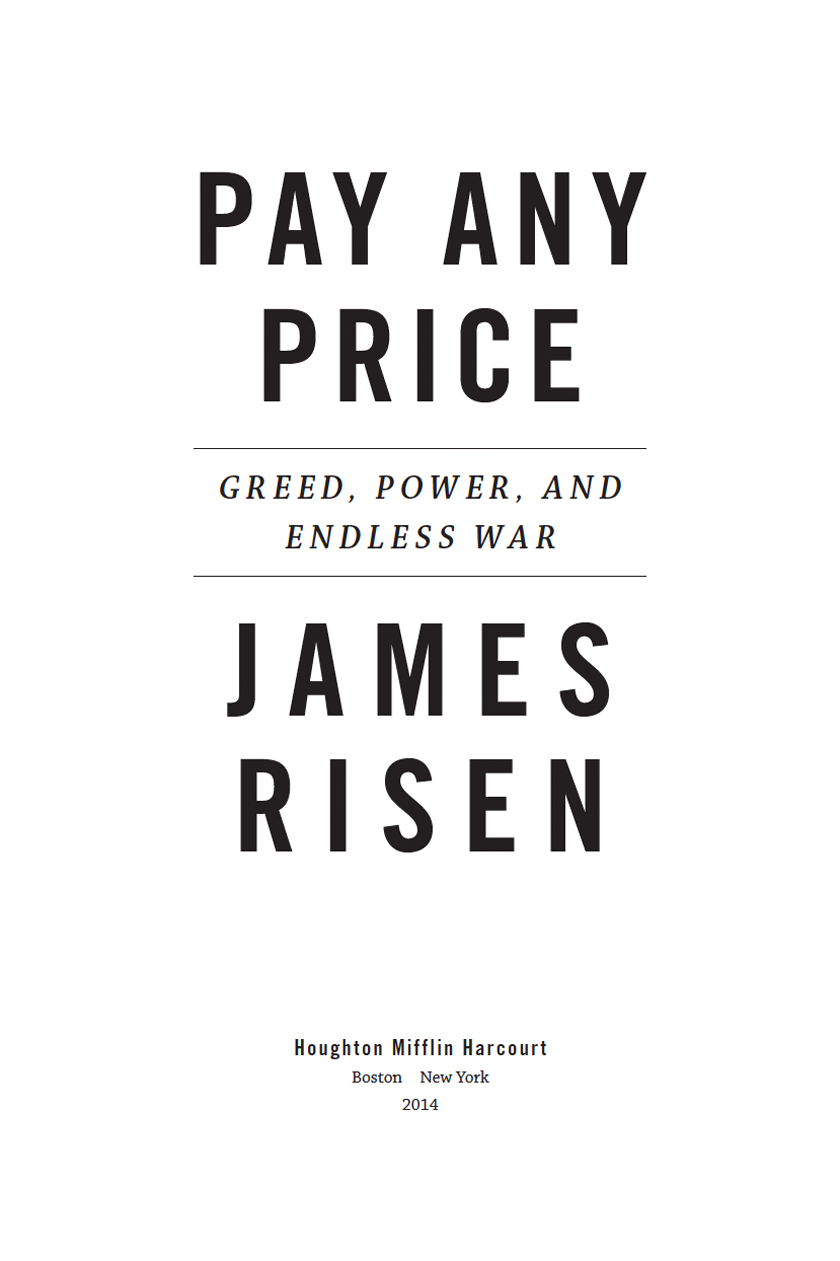 A Note on Sources

The Emperor of the War on Terror

Too Big to Fail

The War on Decency

The War on Normalcy

The War on Truth

The Library of Congress has cataloged the print edition as follows:

“I've come back,” he repeated; “and I was the King of Kafiristanâme and Dravotâcrowned Kings we was! In this office we settled itâyou setting there and giving us the books. I am PeacheyâPeachey Taliaferro Carnehan, and you've been setting here ever sinceâO Lord!”

I was more than a little astonished, and expressed my feelings accordingly.

“It's true,” said Carnehan, with a dry cackle, nursing his feet which were wrapped in rags. “True as gospel. Kings we were, with crowns upon our headsâme and Dravotâpoor Danâoh, poor, poor Dan, that would never take advice, not though I begged of him!”

The Man Who Would Be King

A Note on Sources

Many people have criticized the use of anonymous sources. Yet all reporters know that the very best storiesâthe most important, the most sensitiveârely on them. This book would not be possible without the cooperation of many current and former government officials and other individuals who were willing to discuss sensitive matters only on the condition of anonymity.

On April 9, 2009, near the start of the first Obama administration, former Deputy Secretary of Defense Paul Wolfowitz attended a modest ceremony at Arlington National Cemetery marking the sixth anniversary of the fall of Baghdad. Fewer than fifty people were gathered that day in Arlington's section 60, where the dead of the Iraq war lay buried, to mark the fact that on April 9, 2003, American tanks had rumbled into downtown Baghdad, and the statue of Saddam Hussein in Firdos Square had been toppled. For Wolfowitz and the ardent advocates of the invasion of Iraq, April 9 was Iraq Liberation Day, and they didn't care that by 2009, most Americans were exhausted by Iraq and eager to forget that the war had ever been fought.

Wolfowitz listened to speeches by a representative of the American Legion, a Gold Star mother, the Iraqi ambassador, and Viola Drath, an aging Georgetown socialite who was the organizer of the event. Never mind that the invasion that ousted Saddam Hussein in just three weeks had turned into a prolonged and brutal war of attrition, or that the Iraqi weapons of mass destruction which had been the predicate for the invasion had turned out to be illusory, or that on that same sixth anniversary in 2009, an estimated thirty thousand Iraqis poured into Firdos Square in Baghdad to angrily protest the continued American occupation of Iraq, while the anniversary went largely unmarked in the United States save for this small gathering in section 60. None of that mattered. Wolfowitz, one of the architects of the Iraq war, was upbeat. After the ceremony, he and I walked and chatted together through the cemetery, from section 60 back to Arlington's entrance, engaging mostly in small talk and pleasantries. But it was clear that Wolfowitz seemed happy that Iraq had turned out so well, at least in his view, and that the global war on terror was still going strong under the direction of a new president who was then in the process of extending and validating many of the Bush administration's most contentious policies.

And there was no end in sight. Wolfowitz was long gone from the Pentagon, and in the 2008 elections, Americans had swept the Republicans from power. Perhaps Barack Obama's greatest political strength was that he seemed as different from George Bush as any politician could be. His campaign offered the promise of light following eight years of Dick Cheney's fondness for operating on what he called the dark side.

But executive power, once accumulated, is a hard thing to give up, and Obama quickly succumbed. He announced that he was determined to “look forward, not back,” and that he opposed any broad new investigations of the Bush administration's use of torture, extraordinary rendition, domestic spying, or other potential crimes. After issuing an executive order to close the prison at GuantÃ¡namo Bay on his first day in office, Obama changed course and kept it open. He surrounded himself with advisors who had been deeply enmeshed in the Bush administration's most contentious national security policies. He expanded the use of drones in so-called targeted killings around the world, continued the use of military tribunals to try terrorism suspects, allowed investigators to question such suspects captured in the United States without reading them their
Miranda
rights, and approved the nonjudicial killing of American citizens who joined al Qaeda. He did virtually nothing to rein in widespread contracting abuse in Iraq, Afghanistan, or the broader global war on terror.

He pushed for and won the authority to allow the National Security Agency (NSA) to continue to conduct broad electronic surveillance on Americans, and he went further, placing the NSA in charge of cybersecurity, giving the spy agency broad new access to the domestic Internet. Senators from his own party soon began to warn that Obama was secretly expanding the government's surveillance powers even beyond those authorized by Bush. Obama allowed the civil liberties panel that was supposed to provide oversight of the government's war on terror to remain idle and only partially staffed for years. His administration launched a draconian crackdown on the press, spying on reporters while prosecuting more leakers and whistleblowers than all previous administrations combined.

Half a century earlier, President Dwight Eisenhower had warned of a new “military-industrial complex”; under Bush and Obama, a parallel “homeland securityâindustrial complex” has been born. The rise of the military-industrial complex had been fueled by fears of Communism. Now, another abstract fear was driving hundreds of billions of dollars a year into building the infrastructure necessary to wage a permanent war on terror, and it had grown like kudzu around the CIA, FBI, Department of Homeland Security, Treasury Department, Pentagon, and dozens of other smaller offices and federal agencies. The post-9/11 panic led Congress to throw cash at counterterrorism faster than the FBI, CIA, and other agencies were able to spend it. One 2012 estimate concluded that the decade of war had cost Americans nearly $4 trillion.

Greed and power are always a dangerous combination. In wartime, power expands and greed can easily follow. The more our counterterrorism infrastructure has grown, the harder it has become to control. The traditional military-industrial complex was at least partly visible to outsiders; it comprised mammoth defense contractors that built airplanes, ships, and rockets, as well as high-tech firms that pioneered computers and advanced electronics. There were often public, aggressive congressional debates about spending on big new weapons systems, and major defense contractors frequently felt compelled to take out advertisements in newspapers and on television to generate support for their projects.

The new homeland securityâindustrial complex operates differently. It is largely made up of a web of intelligence agencies and their contractors, companies that mostly provide secret services rather than large weapons systems and equipment. These contractors are hired to help Washington determine the scale and scope of the terrorist threat; they make no money if they determine that the threat is overblown or, God forbid, if the war on terror ever comes to an end.

The growth of this homeland securityâindustrial complex has come at the same time that outsourcing and privatization have become the new watchwords among management consultants working both in corporate America and inside the government. Now, contractors perform functions once considered inherently governmental, particularly in defense and intelligence. War-zone contractors eventually outnumbered American soldiers in Iraq and Afghanistan.

Today, the CIA relies so heavily on outside contractors that many case officers have learned that the way to get ahead is to quitâand then come back the following week to the same job as a contractor making twice as much money.

As bureaucrats dream up new counterterrorism programs in order to spend the money, they have turned to new companies that seem to sprout mysteriously in the office parks that dot the Dulles Toll Road and other commercial centers in northern Virginia near the CIA and Pentagon. There were more than 1,200 government organizations and nearly 2,000 private companies working on counterterrorism, homeland security, and intelligence programs, the
Washington Post
found in 2010, and more than 850,000 people in America had top-secret clearances, producing 50,000 intelligence reports a year. The U.S. intelligence budget alone has at least doubled since 2001, and by 2013, stood at more than $70 billion a year, including both civilian and military intelligence spending.

It is no accident that seven of the ten wealthiest counties in America are in the Washington, D.C., metropolitan area. A 2012 report by Reuters found that income inequality in Washington was greater than in almost any other city, thanks to the massive amounts of money flowing to lobbyists, contractors, and others benefiting directly or indirectly from federal spending.

America has become accustomed to a permanent state of war. Only a small slice of societyâincluding many poor and rural teenagersâfight and die, while a permanent national security elite rotates among senior government posts, contracting companies, think tanks, and television commentary, opportunities that would disappear if America was suddenly at peace. To most of America, war has become not only tolerable but profitable, and so there is no longer any great incentive to end it.

Thus, the creation of a homeland security complex at a time of endless war has bequeathed us with the central narrative of the war on terrorâmodern tales of greed joined hand in hand with stories of abuse of power. It was inevitable that those wise in the ways of the world would flock to Washington to try to cash in on the war on terror gold rushâand they have. This book offers just a few of those stories. But those trying to monetize America's obsession with terrorism are not the only ones who have sought to exploit 9/11.

Opportunism comes in many forms and is driven by more than just greed. Ambition and a hunger for power, status, and glory have become great engines of post-9/11 opportunism as well. The more troubling stories here concern abuses of power that have extended across two presidencies for well over a decade. After 9/11, the United States deregulated national security, stripping away the post-Watergate intelligence reforms of the 1970s that had constrained executive power for thirty years. The results are morally challengingâand continue to this day.

In May 2013, almost exactly two years after Osama bin Laden's death, President Obama gave a major national security address declaring that it was finally time to reassess the war on terror and recognize that it could not last forever. He vowed to place new limits on drone strikes and to try once again to close GuantÃ¡namo, but he offered few details and left himself plenty of room to continue his counterterrorism policies largely unaltered. In fact, his speech came just one week after Pentagon officials testifying before Congress said that the war on terror was likely to go on for another ten or twenty years, and that the 2001 Authorization for the Use of Military Force, the original congressional resolution providing the broad legal underpinning for the nation's counterterror policies under both Bush and Obama, continues to give the government the right to prosecute the war on terror anywhere and everywhere, from Boston to Pakistan.