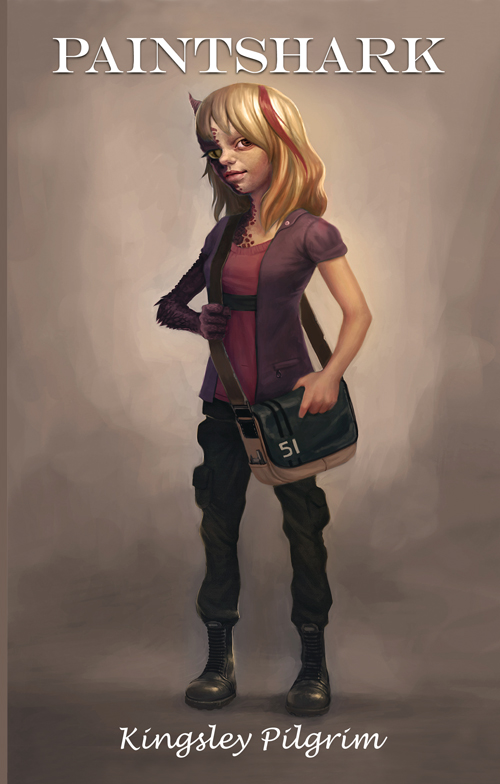 “Young lady, you are about to have a very bad day.”

Big love goes out to Derrick,Jean,Simon,Natasha,Leah and my Mum Chloe Pilgrim who is the most Patient Person in the world.

Special thanks goes to My Editor Natasha Wagner for her Kind Advice and support.

Kay Jones and the rest of my friends and Family.

Either Way is fine by me!

Kingsley Pilgrim is not a Pseudonym for a Notable Writer and Editor!

It's his real name and he is an Actor living in Milton Keynes.

Paintshark is his Debut Novel.

The young girl slowly opened her eyes, her neck hurt; she had been laying on the dance floor for some time. She looked around suddenly as if there was someone laying right bedside her.

There was; bodies of hundreds of young clubbers who were beginning to shift as she did. The nightclub from last night, she could remember going there with her friends.

She looked down at her clothes; she was dressed for clubbing and was meant to be here, but she was wet, her clothes soaked through and she, like everybody else, had traces of foam on her body. People around were getting up and shaking their heads, she apparently wasn’t the only one confused.

The girl turned around as she recognised the voice, and it was her name being called.

Kimberley stumbled to her feet; it was hard to do with her head feeling as if it were spinning to another country and she was about to topple over in her high heels, wiping the excess foam from her top she went to find her friend.

“My God, Cassandra, what happened? I can’t remember.”

Kimberley’s friend Cassandra seemed blank too; she wiped foam away from her blond hair and shook her head. “I don’t know.”

A male clubber stumbled up to them. “Are you two ok?” The girls nodded simultaneously. “Can’t remember a thing, dude,” he said as he ambled away; Cassandra squinted her brown eyes toward something in the distance and pointed to a poster on the wall.

“Look over there, it does say water and foam party here last night.” A realisation dawned on her. “I remember now, we were all dancing and then they turned the foam machine on followed by the sprinklers. That’s how we got soaking wet, do you remember, Kimberley?” A glance and a shrug was all Cassandra got back from her friend.

Another clubber wiped foam from his eyes as he walked past. “Are you ok?” he asked. The girls nodded again in unison and Cassandra continued her apparent explanation of the sleeping bodies on the dance floor. “Maybe it was something in the water that knocked us out?” Kimberley folded her arms and stared back.

“Knocked out everybody? I doubt it; all I know is that we came to a club, danced for a bit, watched a bit of that stupid reality TV show in the background and then woke up on the floor, either way we’re going to have to get home before school in the morning.”

Another clubber walked up to the girls; it was a girl this time, roughly the same age with a tight red dress.

“I don’t remember anything last night,” she said dreamily. “Are you two ok?” Kimberley and Cassandra backed away, their eyes riveted on the girl’s face. For a nauseating instant Cassandra pointed to her head. “You’ve got something in your hair,” she said, her voice quivering.

The girl cocked her head at a slight angle, puzzled by the sound of Cassandra’s voice, she casually ran her fingers through then snapped them back sharply, her face becoming a picture of terror, she whimpered and concentrated on the frozen expressions on the two girls as with both hands now feeling her hair…it was moving, slithering.

Another girl rose from her dance floor slumber and threw her head back and screamed in horror as she saw what was in the girl’s hair… or what the girl’s hair was.

Something slithered across the red dressed girl’s eye as her other eye widened with terror. Some of the night clubbers were screaming the place down and ran for the exits while some were puking their guts out, but there were some who looked on in awe, impressed and unsure what to make of this freak show.

With a despairing moan the red dressed girl felt her hair again, it bit her and she recoiled with a mixture of disbelief and horror. Her hair was a seething mass of snakes; they twisted and turned but would travel no further than the girl’s skull would allow, they clung to her scalp hissing and swarming around her head.

The girl in the red dress shook uncontrollably but refused to move and took deep long breaths. She saw Kimberley and Cassandra were closer to her than anybody else and she implored to them with a whisper, “Get them off me.” The girls stood still. “Get them off of me please.”

Cassandra shook her head in a blind panic as the snake-haired girl wailed, “GET THEM OFF ME!” She had time to pass out before Cassandra emptied her guts onto the dance floor.

Cassandra fiddled with her iPod to find a decent tune, she had been waiting at the same spot for ages now and was getting bored at watching other students pass her by on their way to school.

She stood up from the one of the many benches littered along the Redway to stretch her dance-tired legs.

The girl looked at her watch for the umpteenth time and then flicked her wrist over to vigorously scratch the underside, it had been itching ever since she had crawled out of bed that morning,
could it have been that water from the nightclub?
she thought, and if her friend had turned up on time then she might have been able to put her theory to her.

The vibrating from inside her bag made Cassandra snap out of her thinking, it was her phone, which was buzzing like there were a hive of bees trapped inside the case. Flicking open the phone she sighed heavily as she read the message.

“Oh for goodness sake,” she muttered beneath her breath, her fingers ran quickly ran over the phone keys to reply to the message, only seconds went by until her phone growled again, and she read the new message.

Cassandra popped the phone back into her bag and sat back down on the bench to wait some more.

True to her word, ten minutes went by before her friend Kimberley arrived.

Cassandra raised her eyebrows and pointed to some plants nearby. “Have I been waiting long? You see those flowers down there…well they were bulbs when I first got here, and don’t call me ‘girlfriend’.”

Kimberley wiped her nose with the back of her hand and smiled. “Good one, anyway why are we meeting here instead of your house?”

The other girl stood to her feet and stretched her arms. “I didn’t stay at home last night, I’m staying at my grandparents’ house, their house was closer to the nightclub and I’m helping them with their computer, they’re still trying to get used to sending e-mails, Gran must have sent a hundred of them, always asking, ‘Cassandra, can you read this message?’ And then I always reply back, ‘No’.”

Kimberley exchanged a look with her. “That’s cruel, Cassandra.”

“Well it gets me through the day, anyway speaking of cruel, do you know how annoying your texts are?”

Kimberley frowned. “What you mean?”

“Well every text you send ends in, ‘lol lol lol’. I could send you a text saying, ‘What are you doing now?’ And you’d reply, ‘Walking to school with you lol’ or, ‘Saw a girl with snakes for her hair last night lol’.”

“Are people really laughing out loud as often as they say they are on text? If they are, then this country must sound insane, imagine your texts you sent me, ‘Oh I’m running late, be 10 mins’.” Cassandra then threw her head back and let out a maniacal loud laugh.

“I can only get out of one side of the bed,” Cassandra replied.

She scratched her arm again and apologised. “I’m sorry, it’s just that I hardly got any sleep last night, that crazy girl with the hair freaked me out and since I woke up…my arm’s been itching really bad.”

Kimberley stopped walking and pulled her friend back. “Omigod.”

“You’ve been itching too?”

“Yeah I just said that my–”

Kimberley didn’t give her a chance to finish. “I thought it was just me but my arms have been itching all morning, at first I thought it was me being allergic to some skin cream but now you’ve got it too.”

Kimberley showed Cassandra the inside of her arms and they were red from the intense scratching she’d given them, Cassandra wasn’t convinced.

“That could mean anything, it could still be the skin cream because I use the same one, it could be fleas from your mangy cat.”

Kimberley felt her lip twitch. “He doesn’t have fleas.”

Cassandra sighed. “Whatever.” She wasn’t finished. “Don’t get carried away, Kim, I know you, you’re going to put two and two together and get four.”

Cassandra squirmed at her simple mistake. “Oh you’ve got me talking gibberish now.”

There was a short pause before Kimberley continued, “What if the water from the club sprinklers last night was infected with something?”

“No Kim, the water from the sprinklers did not infect us, but the water from the taps probably did, that’s why everyone was knocked out for a while and that’s the reason we probably had hallucinations ergo we saw, or we
thought we saw
a girl with snakes for her hair, nothing like that happened last night it was a trick or an illusion…a good one but still a trick.” She breathed out. “Now come on…we’re late enough as it is.”

The girls in their late teens walked side by side along the faded Redway, their arms interlocked as they carried school books in the other.

Kimberley had golden tanned skin, unblemished and fragrant, she had long blond hair, tied tight in to corn rolls which hung to the base of her back, her eyes were blue and constantly wandering, and she seemed never to miss out on any information which she may have missed first time round.

“Pinch me tell me that it was a dream then,” Kimberley mouthed.

Her friend Cassandra had smooth pale skin and a small lovely head adorned with jewellery. Her hair was blond too, apart from a few streaks of dyed red on one side. She was about to answer her friend’s request and opened her mouth, but then shook her head and looked the other way. Kimberley pleaded again, pulling Cassandra closer and almost causing her to drop her books.

Cassandra raised her tiny eyebrows for the second time. “No I’m not going to pinch you and it wasn’t a dream, besides how can we both have the same dream? Like I said…it was water poisoning that knocked us for a loop and gave us this rash.”

Kimberley wriggled her little nose, something she often did when she was trying to think. “So we both didn’t see a girl with snakes for her hair last night?”

Cassandra shrugged her shoulders. “You know what? I think it was a special effect, like in the movies? Very real, very convincing.”