Overtime in the Boss's Bed 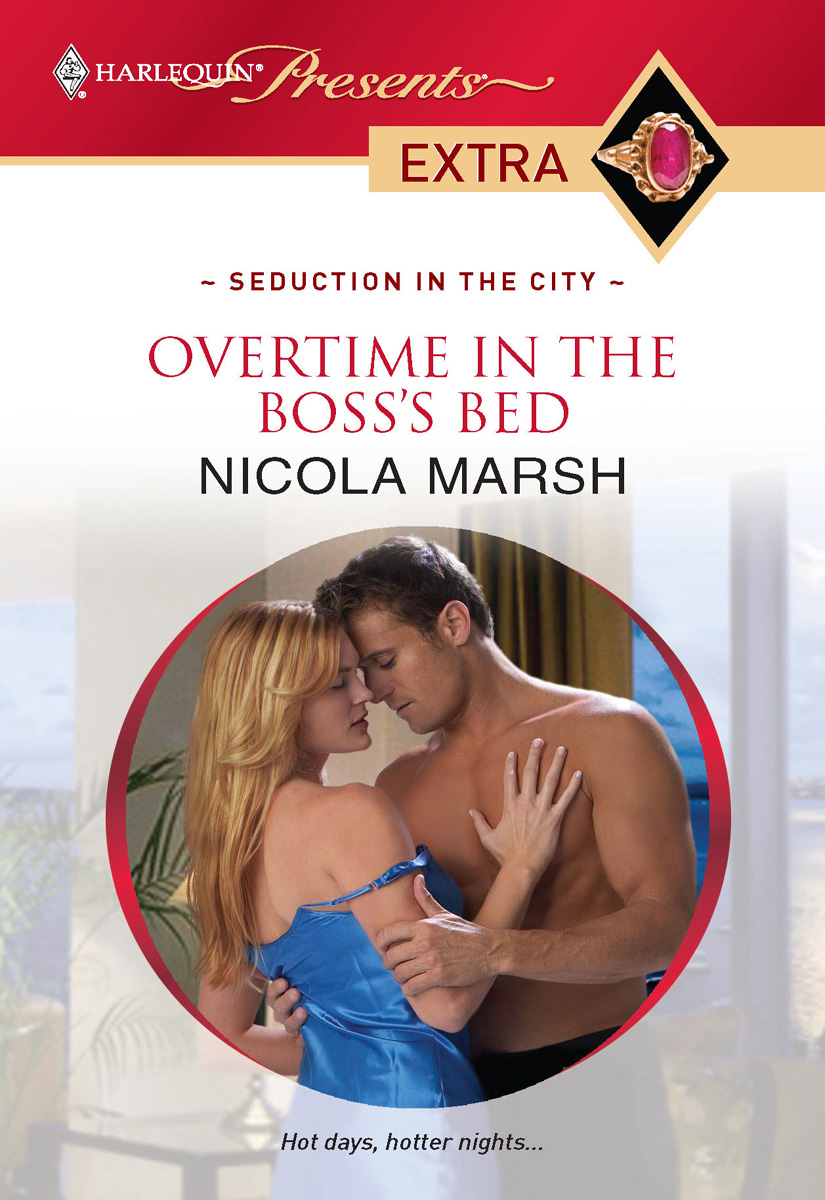 “Shall we start the interview?”

It was impossible to stand there and pretend only to view him as a prospective boss when she’d seen him naked.

Inwardly cringing at her awkward response, she dropped her hands to her sides, flexed her fingers, shook them out, mustered her best stage face.

“What do you want to know? My typing speed? PC skills? Microsoft literate? Multitasker?”

Heck, she was babbling, sounding more moronic by the second, while his expression remained impassive, his gaze focused on her with frightening clarity, and she suddenly knew she’d been a fool to mistake this man for anything other than an imperturbable, composed businessman who’d let nothing stand in the way of getting what he wanted.

And she needed money desperately.

A win-win for them both.

If she could just forget the fact she’d had the best sex of her life with him.

NICOLA MARSH
has always had a passion for writing and reading. As a youngster, she devoured books when she should have been sleeping, and later kept a diary whose content could be an epic in itself! These days, when she’s not enjoying life with her husband and son in her home city of Melbourne, she’s at her computer, creating the romances she loves, in her dream job. Visit Nicola’s Web site at www.nicolamarsh.com for the latest news of her books.

~ Seduction in the City ~

OVERTIME IN THE BOSS’S BED

This one’s for my dancing buddy Jen.

Remember how we used to burn up the floor at Bobby McGee’s and the Geebung? Fun memories…

T
HE BRONZE GOD WAS NAKED
.

Gloriously, eye-poppingly naked, every muscle flexing and bunching and glistening as he carried a tray laden with cocktails and champagne flutes through the crowd.

‘You can close your jaw now, before it hits the floor.’

Starr Merriday blinked once, twice, the spell broken as she tore her reluctant gaze away from the waiter and frowned at her best friend Kit.

‘It’s your fault. You brought me to this den of iniquity.’

Kit wiggled her eyebrows suggestively, her chuckle positively wicked. ‘Yeah, and you’re loving every minute of it.’

‘It does have its benefits.’

Starr’s gaze strayed to the ripped waiter again, lingered on his pecs, the light smattering of dark hair across his broad chest, dipped to his navel, the arrowing of hair beneath it…

‘Jeez, what does a girl have to do to get a drink in this place?’

‘More like hot all over,’ she muttered, thankful the waiters were clothed from the waist down, beyond thankful Kit had chosen one of her entrepreneurial mother’s infamous cocktail parties for her farewell.

Nothing like a roomful of semi-naked guys to get a girl’s mind off the fact she was jobless, homeless and penniless.

‘Don’t look now, but I think he’s checking me out.’

Kit’s subtle head-jerk towards Mr Pecs had Starr darting a quick glance in his direction, just in time to see him stumble, the tray skating on his palms like a penguin on ice, sloshing cocktails everywhere, the bulk of them landing on the guy next to him.

Sympathy warred with mirth as she watched the waiter try to mop up the mess, the guy in the suit waving him away with a frown.

The cocktail-wearing recipient looked out of place, suited and buttoned-up in a roomful of semi-naked guys, and she grinned as he fiddled with the knot of his tie, straightening it, aiming for cool, despite having several mojitos and a magnum of champagne dumped on his Armani duds.

‘Yeah, he was definitely checking me out. Just one look and the guy does that. Back soon, hun. Off to mingle—find me a less clumsy one.’

Kit headed for the bar—and a tempting conglomeration of buffed waiters—while Starr found her gaze drawn back to the suit.

She’d been too busy ogling the waiters to notice the other guys in the room, but now she had… Slick guys
in suits weren’t her thing, but there was something about this guy. The way he stood, tall, proud, indomitable, despite a cocktail-dousing, his class obvious, his imperious gaze scanning the crowd…clashing with hers.

Startled, she dropped her gaze, surprised by the lick of heat lapping her skin after their momentary eye-lock.

The smart thing to do would be to quickstep out of here. But considering the shambles her life was at the moment, she hadn’t done the smart thing in ages.

Curious to see if her inexplicable reaction to the stranger had been a result of a testosterone overdose from being in this room too long, she slowly raised her gaze to his. The moment of impact was just as cataclysmic as the first time.

He arched an eyebrow, his dark eyes filled with questions she had no hope of answering, the sardonic twist of his mouth tempting her to march right over there and set him straight.

His lips curved in a decadent smile, shattering that particular delusion.

Damn, she was a sucker.

The only reason she’d come tonight was to avoid mulling. She’d already done the pity party earlier that week, complete with crashing cymbals, tooting horns and a banner that had read ‘Fallen Starr’, reminding her of the utter mess she now faced, courtesy of one lousy decision.

She’d fallen for the wrong guy.

So what the hell was she doing, standing here, en
couraging some serious eye contact flirtation with absolutely no intention of following through?

Sculling the rest of her drink, she headed for the glass-enclosed balcony fifty storeys above Sydney. Maybe some fresh air might give her a little perspective. Yeah, right, and a miracle might drop from the heavens too.

Leaving the jam-packed room, laden with expensive perfume and excessive testosterone, she stepped onto the balcony, grateful for its solitude, impressed by the view.

No doubt about it—Kit’s mum knew how to throw top shindigs. Sydney came alive at night, shimmied and salsa-ed and samba-ed from dusk to dawn, and she loved it—loved every vibrant inch. As she watched a Manly ferry leave Circular Quay on a journey it made many times a day, the lights of the bustling city twinkling far beneath, the impact of leaving slammed into her hard, hurting despite the week she’d had to adjust.

Sydney was her past, Melbourne her future.

The deep voice washed over her, and she shivered despite the balmy summer evening as
he
stepped in front of her—so much more striking up close, so much more appealing, so much more
everything.

She couldn’t see the colour of his eyes, or read their expression out here in the shadows, but there was no mistaking the amusement lacing his smoother-than-velvet voice.

He’d followed her out here, was trying to get a rise out of her, and while her first instinct was to tell him where to go, she swallowed it.

She’d never been one to wallow, and while her life
as she knew it had just been flushed down the toilet and discharged into Sydney Harbour, there was no time like the present to test her new male-immunity programme.

‘Too many people back there—’ he jerked his thumb towards the packed room ‘—and the only interesting ones are out here.’

He crooked his finger, and she inadvertently leaned forward.

‘Care to help me improve my technique?’

‘Nope. Not in the mood for meaningless small talk and pitiable one-liners.’

He laughed. ‘How about a meaningful exchange?’

She jabbed at his chest, realising her mistake a second too late as she connected with a hard wall of tempting male flesh.

His mouth twitched as she removed her finger
tout de suite,
the initial electricity zap from touching him fading into a residual tingle.

He didn’t budge, didn’t move a muscle even as she belatedly realised a big, strong, he-man like him would see her reluctance as a challenge.

‘Doesn’t mean I’m going to back down, though.’

She raised an eyebrow, surprised by his commanding tone. Who
was
this guy anyway?

‘Look, unless you have a dream job in Melbourne’s premier dance company to coerce me into listening to any more of your drivel, beat it.’

Her feistiness didn’t deter him. He folded his arms, propped himself against the balcony railing, his expression intrigued.

Desperately. Dance companies in Sydney were out, so she’d booked a ticket to Melbourne, ready to audition her little tap shoes off in order to find a job—any job—and start rebuilding her life.

She screwed up her nose, her withering glare doing little to discourage him if his confident grin was any indication.

He leaned closer, heart-stoppingly closer, and as she submerged the urge to bury her face in that broad chest she took a steadying breath, only to be bombarded with an intoxicating blend of fresh limes, tequila and strawberries. Fruity and tart, a heavenly cocktail mix, shaken and stirred, and served by one hell of a guy.

‘You always this brash?’

‘You always this forward with someone you don’t know?’

He held out his hand, leaving her no option but to
take it, gritting her teeth against the insane surge of heat sizzling up her arm.

‘Callum Cartwright. CEO of Cartwright Corporation. In desperate need of a temp PA ’til I find a long-term replacement.’

She slipped her hand from his, dropped it to her side, curled and uncurled her fingers several times to eradicate the residual tingling.

He slid a card from his top pocket, handed it to her.

‘In case you change your mind.’

With an annoyed huff, she shook her head. ‘You just don’t give up, do you?’

‘Not in my vocabulary.’

She toyed with the card, flipping it between her thumb and index finger, dying to glance at it but not wanting to give him the satisfaction.

‘Let me guess. You’re one of those demanding, controlling, determined bosses who won’t take no for an answer.’

An odd expression she couldn’t decipher creased his brow for a second before vanishing.

‘You don’t get to be the best by settling. For anything.’

Excitement rippled through her—whether from his drive, his power or his proximity, she had no idea.

She could play it safe, give him a boring brush-off. But she was through playing it safe. Look where safe had got her for the last few years.

Uh-uh. Safe was for being the best at her job, staying loyal to one dance company for seven years, trusting her partner. And look where she’d landed anyway.

‘That depends.’ She leaned into his personal space, her reeling senses on overload. ‘What’s on offer?’

This close, she could see his eyes were dark—deliciously dark and enigmatic—though she didn’t need to be Sherlock Holmes to figure out the mystery behind them right now.

He was turned on: pupils dilated, eyes wide, pheromones creating a sensual cocoon around them.

The buzz she’d experienced when jabbing his chest had returned tenfold, multiplying and stultifying and defying her to take a risk.

She wanted to push the boundaries, to flirt, to feel feminine and desirable and wanted—all sadly lacking in her last relationship.

But was it worth inviting a potential one-night stand on her last night in Sydney?

For one drawn-out, exciting, tension-fraught moment, with Callum Cartwright staring into her eyes, she was sorely tempted.

Becoming by Chris Ord
We Were Young and Carefree by Laurent Fignon
Meet Mr Mulliner by P.G. Wodehouse
In Blood and Worth Loving by Marilyn Lee
Heart of Hurricane by Ginna Gray
The Bridegroom by Linda Lael Miller
Hystopia: A Novel by David Means
Edge of the Wilderness by Stephanie Grace Whitson
How to Survive a Killer Seance by Warner, Penny
The Child by Sarah Schulman