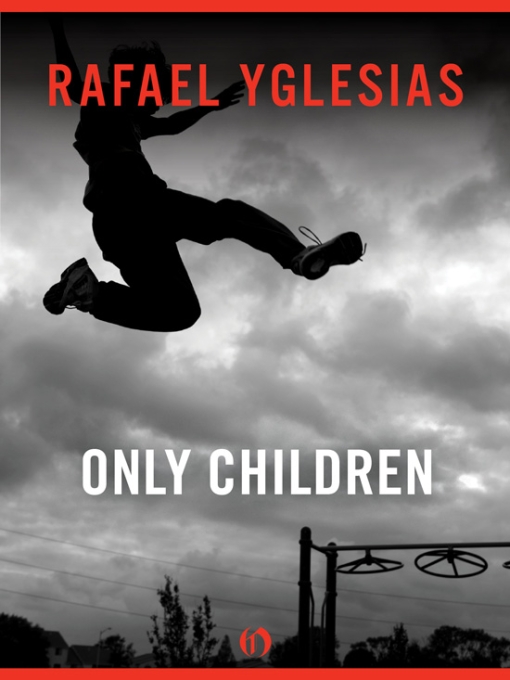 A Biography of Rafael Yglesias

A
T LAST
, she felt The pain. From out of the universe the hurt arrived: rumbled into her belly, radiated to her pelvis, crashed into her spine, and dissolved, a terrible acid, into her bones.

And then it was gone.

Nina rose from the bed slowly—for weeks she had had to rotate herself one way, then the other, in order to gain enough momentum for rising—and waddled out of the bedroom.

Once in the hallway, she heard Eric on the phone. He was at the center of an electronic carnival. Besides using the phone, Eric had his eyes on a television broadcast of a baseball game, its volume muted, while the stereo softly played his current obsession, Handel’s
Messiah
. To achieve these multiple sensory gratifications, Eric had stretched the phone wire from the kitchen wall unit all the way out, across the living room, so he could sit on the couch while chatting, his eyes on the television, his ears perfectly positioned to hear the stereo balance.

She followed orders. Quietly, although the bend down to the liquor cabinet made her want to groan, Nina took out a bottle of bourbon—Eric, his senses already overloaded, didn’t notice her— and sneaked into the kitchen. She sighed and rested for a moment before getting a glass. Her eyes lit on the wall calendar above the cutting board. Today, June 10, was circled in red, by a pen whose ink had long since dried up. It’s psychosomatic, she said to herself. Nobody delivers on their due date.

She poured a shot. The amber liquid looked revolting. She sipped it, felt her tongue rebel against the harsh taste, and, to get it over with, quickly tossed the rest back.

She stood there for a while, thinking nothing, waiting. When she gave up her attentiveness to her insides, she realized with dismay that she had forgotten to notice the time. Mild dismay—a familiar feeling of regret at her own inefficiency. Not that she thought herself scatterbrained, simply lazily irresponsible, letting everything go until the last minute. Perhaps that was why this promptness—

Again it came. The world’s colors intensified; its shapes wavered. She grabbed the counter—squeezed for the reassurance of permanence. Her bloated body seemed ready to explode—stopped up—the imprisoned pressure hardening fiercely. If it weren’t for the stabbing pain in her back, it wouldn’t be so bad. …

It was gone. Check the time. She wasn’t wearing her watch; the battery had run down months ago, and she hadn’t gotten around to … oh, well. She looked at the little clock built into the kitchen stove: eight-thirty. Since it was the middle of the afternoon, she knew that was wrong.

Nina walked laboriously back into the bedroom before it occurred to her that it didn’t matter whether the clock was set right, she only needed to check the length of the intervals. Her impression was that it hadn’t been very long between the first and second. Also, the shot of booze hadn’t made them go away, ruling out what’s his name’s pains: false labor. Now that she was at the radio clock beside the bed, how much time had gone by since the attack at the counter?

I’ll have to tell Eric and let him keep track. He’ll bring out his stopwatch and video camera, she warned herself. He’ll hover and fret and pack and take out manuals and check outside to see how available taxis were. … It was a nightmare really, the combination of her lazy disorganization and his nervous disorganization.

Who the hell was Eric talking to? He had spent the entire nine months on the phone. On the phone or out with friends. She hoped. Not that he wasn’t involved in the pregnancy. His repeated living room concerts of the
Messiah
expressed just how dangerously fascinated he had become.

“Most people have children in their early twenties. We’re not precocious,” she’d answer, meaning that since they were both over thirty—he was thirty-one, she had had the joy of turning thirty while six months gone—they were mature enough to attempt parenthood.

“I’m kidding,” he’d answer, hugging her, or trying to, and then put his big hand on the basketball she had swallowed. “Is he or she moving?”

“I’m sure it’s a girl,” Eric would always say, convincing her that he wanted a boy desperately, so much so that he thought saying the opposite would prevent a jinx. His constant wondering made her wish her doctor, Marge Ephron, had ordered amniocentesis. Ephron hadn’t, however. Eric claimed that if Nina had had the procedure, he wouldn’t want to be told the sex ahead of time, but Nina knew he couldn’t enjoy a self-imposed suspense.

The pains were false, she decided, feeling very comfortable and warm from the shot of alcohol. She hadn’t had a drink since the first month, and this little bit was having a field day with her sober system. She felt pleasantly smashed.

“You must be having a ball,” she said to her stomach out loud. That startled her. She never talked to herself. Eric did. It spooked her the first time she overheard him: mumbling to himself late at night in his study, hunched over the stock graphs, talking his gobbledygook: “It’s priced at only half book value, the P/E is low. … ”

Baby must be bombed, she decided from the dormancy below. Maybe the drink killed him. Yes, him. The restless kicking, the four reversals of positions (according to Dr. Ephron, baby was breech at the latest examination) meant it was a boy. His father’s son. If it were a girl like her, she would be enjoying the dark and sleeping peacefully. No, it was a little male in there, watching television, playing music, and talking on a tiny blue telephone. “Excuse me,” he could be saying. “Gotta run.”

Was that a pain? This one seemed to originate with her, building slowly, no invasion from the heavens. Her middle constricted. She felt more coming and began to rub in the motion she was taught and do her breathing. For a moment or two, it worked. The pain seemed elongated by the breaths but also diminished—and then suddenly her back was breaking, something was coming out through her spine. “Damn!” she said aloud, and tried to roll onto her side. Maybe I have to take a crap, she hoped.

“What’s up?” Eric asked. He stood in the doorway and she noticed his height, almost six and a half feet, his kinky hair barely clearing the top.

I’ll never get his son out through my little vagina, she despaired. Now there was only a faint trace, a shadow, of the stabbing in her spine. “I think it’s started,” she answered.

For a moment Eric looked blank. His big brown eyes, set wide apart, were usually warm and welcoming, slightly baffled while he listened, but now they stared ahead dumbly—a cartoon character’s eyes.

She rolled herself up into a sitting position. “I haven’t timed them,” she said, sighing.

“How many?” he asked, his voice squeaking a little.

“I think. I don’t know. You’d better keep track of the time.”

“Did you call the doctor?”

“You were on the phone.”

“Honey! For this I would’ve hung up.”

“It’s too early to call anyway.”

Eric remained fixed in the doorway, staring. He looked shocked, as though he had never expected this to happen. What did he think— she was going to carry the Goodyear blimp inside her forever? “When are we supposed to call?”

“I forget,” she said. She straightened herself with a groan.

“That’s when we go to the hospital?”

“Is that what it is?” she asked quizzically.

“No, I call at ten minutes. I think that’s what it is.” She decided to lie down—but she couldn’t move. She suddenly felt convinced that if she kept still, the pains wouldn’t come anymore. But I want them to come, she argued to herself. I want to get this over with.

“Ten minutes!” he exclaimed, and walked farther in. His nervous energy had returned, his eyes flickering with schemes, irritation, plots, and feeling; emotion appeared on his face as though he were a transparent man. She loved him because of this quality, so different from herself; often she couldn’t show what trembled inside her even when she wished to. Especially happiness—the pleasant mask of her features would stubbornly resist being stretched into an ecstatic smile and she’d offend gift givers, lovers, praising parents with her content, but unexcited, face. She marveled at the rapid play of Eric’s feelings—drop a tiny pebble into the pool of his soul and watch the magic ripples appear, extend, and glide out into the world, spreading his joy or his fury. When she married him and kissed his pale face, drawn at the awesome prospect of eternity with her, and saw the color return while they danced surrounded by friends, she knew she could trust him; that when he stopped loving her, the sorrowful finale would reverberate on his face’s sounding board for everyone to hear. “Ten minutes!” he exclaimed again with worry and disapproval. “That doesn’t sound right.”

“Look in the notebook,” she said, nodding at the dresser.

He opened the steno book where she had written all the information they had been told by the doctor and the midwife at the childbirth classes. He hunched over to read, lowered his head, and stared at the words. “Ten minutes.” Eric was disgusted, as though he had lost a bet. “How long are they?” he asked, looking up at her.

“I told you—I don’t know. You’re in charge of timing them.”

He nodded and pushed his sleeve away to look at his watch. “When was the last one?”

“Sorry.” He put a hand up to deflect her furious words. He leaned against the dresser and continued to glare at his timepiece.

She laughed at the sight. He was capable of remaining in that position, awaiting her next spasm, for hours.

Now she really began to laugh and then choke as she tried to talk: “It’s not—it’s not how much time there is—not how much before the—”

“I know that!” he protested, looking up. “But ten minutes apart can be only an hour or so before delivery.”

She shook her head no. He nodded yes. She repeated her negative motions, closing her eyes while she did, as if another contradiction would be too much to bear.

“Most of the time it’s much longer, but I read that
sometimes
, sometimes, it’s only an hour away.”

“That’s with second and third children.”

“What are we arguing for?” he squealed to the ceiling, his hands out in frustration. He went back to his watch.

“I can’t eat,” she said after a few moments.

“No,” she corrected. Talking took too much energy. “I’m not allowed to.”

Eric picked up the notebook again and flipped it open.

“Only soup,” she said. “Clear soup,” she added, hoping to stop him from searching for information she already knew.

It didn’t. Eric leafed through the notebook deliberately until he found the right page. “Clear soup,” he said, as though this were the first time it had been mentioned. “Are you hungry? Do you want me to get some?”

“Get some?” she asked, baffled.

“Is that because of anesthesia?”

“I feel like I’m stoned,” she complained, and shook her head. “Is it me or you?”