Read One Touch of Magic Online

One Touch of Magic 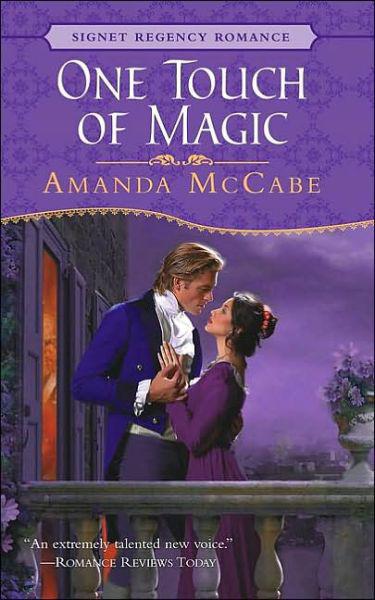 Praise for the Romances of Amanda McCabe

“An enthralling spell of tender romance with a hint of danger, set against the glittering backdrop of Regency London.”

“[A] terrific book that kept me engrossed the entire time! A real winner.”

“Amanda McCabe has been delighting readers since her debut, and this sweetly engaging tale doesn’t disappoint. She has a talent for bringing ordinary characters into soft focus and making us want the best for them.”

“McCabe is a welcome addition to the ranks of Regency authors. She creates well-developed characters, both primary and secondary. She re-creates the world of Regency society with a sure hand. She provides a sweet and moving romance.”

Published by Signet Eclipse, an imprint of New American Library, a division of Penguin Group (USA) Inc.
One Touch of Magic

was previously published in Signet editions.

With love to my family,
Mom, Dad, and Sean
(and Gilbert, Diana, and Victoria, too!)

The Legend of Thora’s Treasure

And now, if you will gather around me, I will tell the story of Thora’s Treasure. There is Viking silver and jewels of great worth. There is true love, love that transcends all time; there is deepest, most bitter loss.

You can see the treasure. But if any person whose heart is not pure removes this treasure, or any part of it, he will be struck from the earth and his name forgotten for all eternity.

The treasure can only belong to Thora’s true heir—to the one it waits for.

“And now we commit the body of the Lord’s servant Sir John Iverson to the earth, and we commend his soul to Thee. Amen.”

Sarah, Lady Iverson, barely heard the vicar’s voice. It seemed to come to her from a very long way away, as if in a dream—or a nightmare.

She stared through the black tulle of her veil at her husband’s coffin placed across the drawing room. She felt oddly numb. Surely she should feel something? John had been her husband, her dearest friend, her mentor. He had taught her all about history, about how to dig in the earth to find ancient secrets. She should feel such deep grief. Not just this distance, this chill unreality. This . . . numbness. It was so very much like those odd dreams she had been having ever since they started working on the Viking village. She saw the village come to life around her, but she was apart from it all. Just an observer.

But perhaps the grief would come later, when she was alone. Perhaps this numbness was God’s way of keeping her from breaking down in sobs in front of everyone.

The vicar ceased speaking, and Sarah automatically murmured “Amen” along with everyone else. She watched as the men stepped forward to prepare to carry John’s coffin from the house to the waiting grave in the churchyard. Still, she could not feel that he was gone. Surely he would wake her up from this dream at any moment, and tell her to quit lazing abed, as they had excavating to do.

She closed her eyes tightly.
Wake up,
she thought.
Wake up.

A hand touched her arm, and she opened her eyes. It was not John, of course; it was her best friend, Mrs. Phoebe Seward.

It was so odd to see Phoebe in black, Sarah thought distractedly. Ordinarily, she was dressed in the brightest colors of the rainbow.

Phoebe’s pretty, usually merry face was somber as she leaned forward and whispered, “Do you want to say good-bye, Sally?”

“Oh, yes. Of course.” Sarah stepped up to the coffin, and laid her hand on the smooth wood.

The chill of it, even through her black glove, at last broke into her numbness, and she knew this was no dream. It was reality. John was gone, and she was alone.

A sob broke from her, and she pressed her hand to her mouth. Phoebe’s grip tightened on Sarah’s arm, and she led her away from the coffin back to the settee, as the men carried John out. Sarah’s mother, Lady Bellweather, her two younger sisters, Mary Ann and Kitty, and John’s friend, Mr. Neville Hamilton, waited for Sarah to be settled, then sat down around her.

Sarah was glad of their familiar company, glad to not be alone.

Until her mother started talking.

Lady Bellweather smoothed her heavily jet-beaded cloak over her capacious bosom, and said, “Well, Sarah. You know how I hate to say I told you so, but I knew when you married Sir John it would end badly. He was so much older than you, and always mucking about in the dirt digging up old things. He was rich, to be sure, but not suitable for a pretty, young girl. Now here you are, a widow at twenty-two.” Lady Bellweather sighed deeply, setting the black feathers in her bonnet to trembling.

Sarah stared at her mother in shock. She had certainly heard her make some tactless remarks before—Lady Bellweather was
not
known in her circles for finesse and tact. But this—this was beyond endurance. Sarah pressed her handkerchief hard against her mouth, so hard that she tasted blood, so she would not say something very rude indeed. Words no lady ever spoke to her mother. She owed John the respect of not making a family scene on today of all days.

Sarah’s sister Mary Ann looked at their mother with wide, shocked dark eyes. “Mama! Sarah is grief-stricken. She loved Sir John. How can you say such things?”

Lady Bellweather had the grace to look at least a bit ashamed. She smoothed her cloak again, and said in a quieter voice, “I am sorry, Sarah. But you know that I must speak as I find. Sir John was a good man, but not the most suitable of husbands for a young girl.”

Sarah looked away, out over the drawing room. The very chairs and tables were well known to her, since she had lived in this house with her husband for over four years, but she did not see them. Her anger at her mother’s words ebbed away, leaving her just tired and sad.

It was true that there had been no passion in her marriage with John. He had been thirty years her senior, a famous scholar and antiquarian, and still devoted to the memory of his late first wife. But there had been fondness, and a shared love for his last project—the excavation of a Viking village on an estate near York.

Sarah smiled as she remembered their work. That village was John’s legacy to her, and she would finish the work as her final gift to him.

She looked over at where Neville Hamilton sat, his sunburned face, nearly as red as his hair, pensive and sad. She knew that Neville, her husband’s friend and colleague, who had been assisting them with the village, expected her to give the work over to him now. He—and everyone else—expected her to go off to Bath or Brighton, and live as a rich young widow until she remarried.

Well, they could
expect
all they wanted. That sort of life was not for her. It never had been, and never would be. She was going to finish excavating the village, and write a monograph on their findings there.

And then—she would find a new project and start all over again.

“Please, sir. A coin for a wounded soldier.”

Major Miles Rutledge stopped abruptly in his hurrying tracks to stare down at the man who sat on the pavement, carefully balanced on a low stool. The thin, dirty hand that held out a battered tin cup shook slightly; a crudely carved cane lay on the ground beside him.

Pinned to his tattered coat was a brightly shining Waterloo medal.

Miles had seen dozens of such men in just the three days since he had arrived in London to spend what was left of the Season with his mother. There was no work for them at all; the economy was in such poor straits that there could not possibly be incomes for so many returning soldiers. They had served so bravely, had risked their very lives for their country, only to come home and watch their families starve, while they stood by helpless. Beggary was rampant.

Miles felt anger, white hot and futile, well up inside him, as it had so very often in these last few days. He had become accustomed to taking care of the men in his regiment while on the Peninsula. Here, he felt a helpless rage. He gave them coins and food, listened to their stories, gave them advice whenever he could. That was not nearly enough. It did not make their lives better. He sat awake at night, feeling guilty for all the advantages he enjoyed, for his family’s more-than-comfortable situation, when good men were hungry.

There
had
to be more he could do.

As he stepped closer to put a coin in the cup, the man looked up. He was quite startlingly young, and thin faced. His bloodshot eyes widened as he saw Miles’s uniform.

“So you’re an officer in the Forty-first Foot,” he said.

“Not for much longer,” Miles answered. He dropped the coin with a clatter—it had obviously not been a good day, for the cup was nearly empty. Then he knelt down beside the man, uncaring of his greatcoat that swept into the dust and rubbish of the pavement. “I am resigning my commission. It’s time for a civilian life.”

The man laughed bitterly. “Aye, well, the civilian life isn’t all they said it would be. I’m Lieutenant Patrick O’Riley, as was, of the Twenty-first. Your regiment did some brave fighting at Talavera.”