One Penny: A Marked Heart Novel 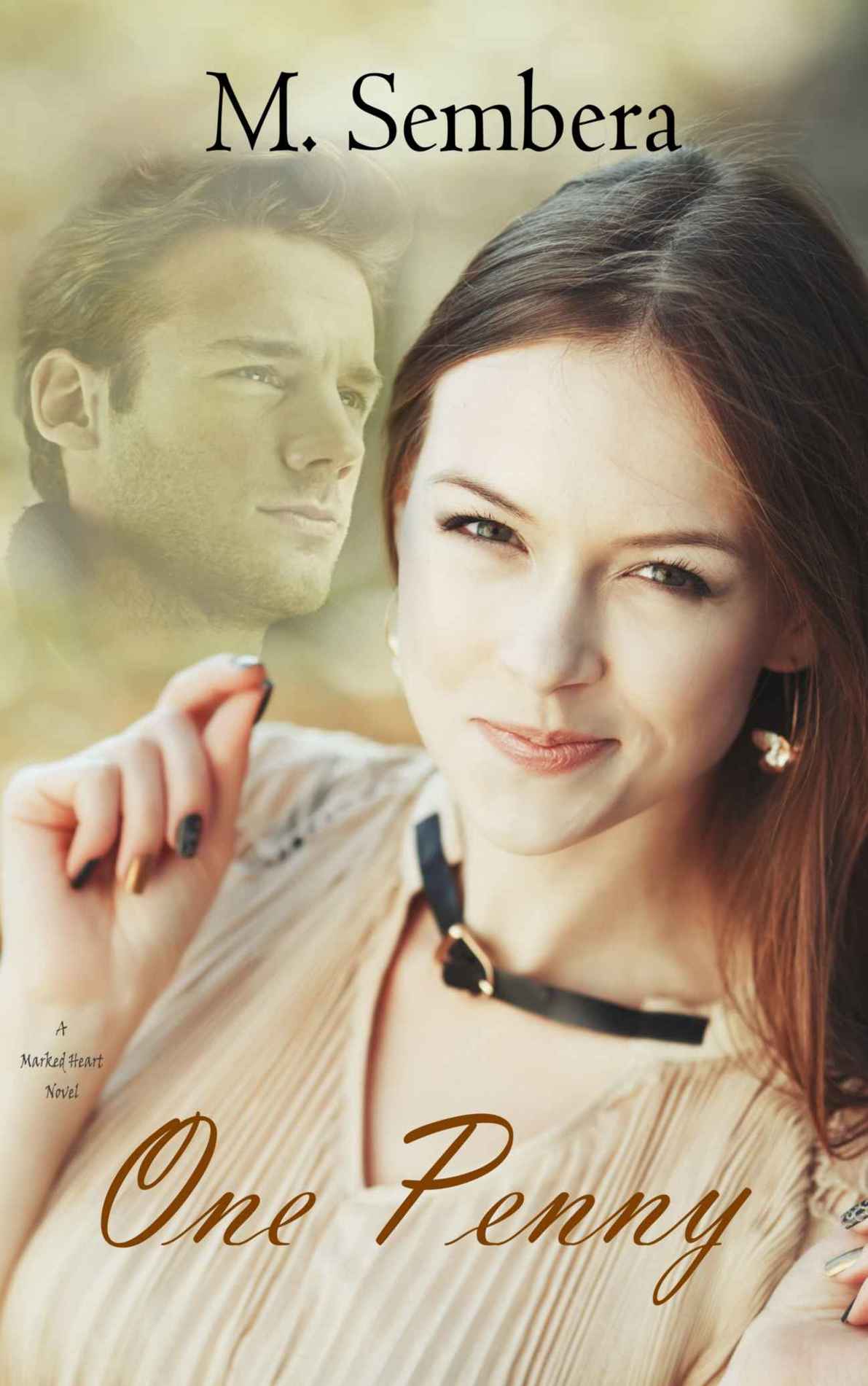 All rights reserved. No part of this book may be used or reproduced in any manner whatsoever without written permission except in the case of brief quotations embodied in articles and reviews.

One Penny is a work of fiction. All names, Characters, places and incidents are the product of the author’s imagination.

Place name and any resemblance to events or actual persons, living or dead, are entirely coincidental.

The Wren and Celtic Heart logo is an original piece of art created specifically for M. Sembera.

'Nothing comes close to you. The way you soothe everything inside of me right down to my soul when I'm with you. I'm not willing to ever give that up.'

To all the foolish, reckless, risk takers.

Legacy: The Legend of Fergus & Cinnie

Foolish is the heart that leaves itself open to falling in love. Reckless is the person who steps away from tradition to claim a life of their own. Irreplaceable is the moment one takes the risk.

Enjoying the sound of the raindrops as they bounced off of her umbrella and fell around her, Penny couldn't have been happier. Her brother Auggie had proposed to her roommate and good friend, Charlotte, and Charlotte said yes. Penny loved her job at Legacy Ink, although she still hid working there from most of her family. Not to mention, for six months she had been dating Brooks, the drummer in her brother Braden's band. That was a personal record for her and the fact that he'd hung around for more than a week or two, led Penny to believe he just might be the one.

After spotting Brooks' car in the parking lot, Penny skipped up the steps to her second floor apartment. She couldn't wait to get inside and see her boyfriend. Thinking maybe all the wedding talk had inspired him, Brooks never just stopped by without calling first. Excited and hopeful, Penny closed her umbrella, gave it a little shake and propped it up against the wall before heading inside.

Stepping into her apartment, she glanced around before heading to her room. Wondering if she would find flowers or rose petals covering the bed or even better strawberries and chocolate. All Penny saw when she walked into her room was Brooks standing there, surprised to see her.

"I thought you wouldn't be home until later," he said, appearing unsure of himself.

Reaching up to scratch the back of his head, Brooks informed, "I was really hoping to do this before you got home."

A slight scowl formed as she thought 'Okay, now he is just being weird'.

"Do what?" she asked, now noticing a box on the floor by her bed.

Tilting his head to the side, Brooks answered, "Ah Penny, I like you, a lot, and you're so much fun to be around..."

She knew what was coming next as she said, "Oh, Okay."

"Thing is, I don't want anything serious right now. Ya know?"

Nodding Penny thought 'this is the ninth time I've heard that', as she repeated, "Yea, okay."

"It's just too much pressure. I'm always worried that I'll do something wrong and your brothers will take it personal."

"Okay," Penny repeated for a third time, thinking it wasn't necessary to point out every little thing that made him not want to be with her.

"And yesterday I had to lie to your mom because you were at the shop..."

"I get it, alright," she griped, feeling more frustrated with him than anything else at this point.

"Still friends?" he asked with a smile.

Watching him pick his box up and start to leave she replied, "Sure."

As he headed out of her room, Brooks turned to her, asking, "Oh, can you tell your brothers it was a mutual break up? I don't want to get my ass beat over this."

"Thanks Penny. You're the best," he assured as he continued out of her room and then her apartment.

Standing in her bedroom, after another failed relationship, Penny thought 'That's it, I give up'.

Sitting on her couch between her roommate Charlotte and her cousin Kieran's wife Liv, Penny dipped her finger in the peanut butter jar before smoothing it over her Hershey bar and taking a bite.

Cringing as she watched Penny, Charlotte asked, "So let me get this straight. He wasn't even going to break up with you in person and you're still going to cover his butt, so Auggie doesn't get mad?"

"Mutual my ass," Liv blurted before saying, "Showing up with a box while you're not home is not mutual. It's a jerk move."

"There were only two t-shirts and a tooth brush in the box," Penny replied as she made a face at Charlotte for reaching over and grabbing the jar of peanut butter out of her hand.

Making her way to the kitchen, Charlotte fussed, "Sticking your nasty fingers in the peanut butter isn't going to solve anything."

Pursing her lips into a smile, Penny shouted after Charlotte, "My fingers aren't nasty they're delicious."

Laughing at the two of them, Liv shook her head before announcing, "Alright Delicious Fingers, I gotta go."

As Charlotte shouted, "Bye," from the kitchen, Penny said, "You're gonna tell Kieran aren't you?"

Frowning, Penny asked, "What do you think I did wrong?"

"Nothing at all beautiful, but next time, be more selective about who you get down with. Sex should be a bonus to being with you not the reason a guy is with you. Ya know?"

Standing up, Liv shared, "And that's coming from someone whose first time was in a friend's passenger seat with a cute drunk guy who got into the wrong car."

Penny laughed as Liv made a clicking sound with her mouth, winked and heading out of the apartment.

Sweeping her long auburn hair over her shoulder, Penny sunk back onto the couch. Holding onto the bottom of her hair, she brushed her fingers across the ends thinking about what Liv said.

Standing at the bottom of the steps that led to his new apartment, Seth was one more call sent to voice mail away from banging his head against the railing. What kind of place doesn't have after hour's maintenance? Willing maintenance to answer his call, he heard someone clear their throat from behind him.

Turning he looked up the stairs and saw a woman wearing a hot pink tank top with black slack and black and white tennis shoes. She had long black hair that was pinned up at the sides and colorful full sleeve tattoos.

Tapping her foot, she griped, "Am I interrupting you?"

Seth pulled his phone from his ear, saying, "I'm sorry. No, I was... I didn't know anyone was trying to come down the stairs."

With an over exaggerated nod, she fussed, "Could ya move out of the way?"

"Sorry," he repeated as he stepped to the side before asking, "Hey, do you live here?"

Passing him by, she replied, "Nope, just visitin'."

Seth looked down at his phone and dialed again.

Glancing up from his cell phone, Seth replied, "Do I what?"

"Do you live here or are you a lurker? Tryin' to pick up woman."

Instantly defensive, he said, "I'm not lurking, I'm trying to move in. I had all the utilities turned on last week but there's still no power. The electric company swears it's not on their end. It was raining so I had to wait to start moving and now the manager's office is closed and I can't get ahold of anyone."

After letting out a loud, "Ha!" she clapped her hands together, saying, "You're having some kinda bad day."

Shaking his head as he slid his phone into his back pocket, he couldn't help but laugh at all of his bad luck.

"I'm Liv, just so ya know and my girls upstairs might be able to help."

Thinking there might be a bright side to this day after all, he replied, "Thank you so much. And I'm Seth."

Liv started to turn around then stopped.

"Word to the wise, Seth, the blonde one's taken and the red head, she's nothin' but trouble," Liv advised before snapping her fingers and then pointing at him.

Nodding at her it was hard to tell if she was serious. Shaking off his encounter with the most interesting woman he'd probably ever met, Seth turned and headed up the stairs.

Sulking on the couch, Penny sighed when she heard a knock at the door.

"Auggie's here," she shouted to Charlotte, who was in her room getting ready to go to work.

"No he's not, I'm driving tonight," she hollered back.

Dragging herself off of the couch, she made her way to the door.

Penny smiled up at the tall, handsome, brown-haired man with a startled look on his face. As she looked him over there was something familiar about him. Then, she realized, she knew him.

"No," he uttered shaking his head before rambling, "I mean yes... Never mind... Sorry," and then turned away.

Watching as he bumped into the railing on his way down the stairs, Penny waited to shut the door until she saw him sprinting across the parking lot. It seemed like he couldn't get away from her fast enough.

With a confused expression, Penny replied, "A guy I went to high school with."

Shaking her head, Charlotte laughed, "They really do start lining up at your door don't they."

Penny couldn't help but laugh at the thought.

"No idea, he just said never mind and then ran away."

Sitting in the cab of the moving truck he'd rented, Seth could feel an anxiety attack coming on. No wonder everything was going wrong today. It had to be a bad omen. Gripping the steering wheel as tight as he could, Seth closed his eyes. Concentrating on his breathing, he inhaled through his nose and slowly exhaled out from his mouth trying to create the calming rhythm years of therapy had taught him.

Once he had relaxed enough to think rationally, Seth decided to wait the night out in the moving truck and first thing in the morning when the apartment manager's office opened he would request a different apartment. There was no way he would be able to live right next door to Penny Caffrey. He wouldn't survive it.