Once You'Ve Touched the Heart 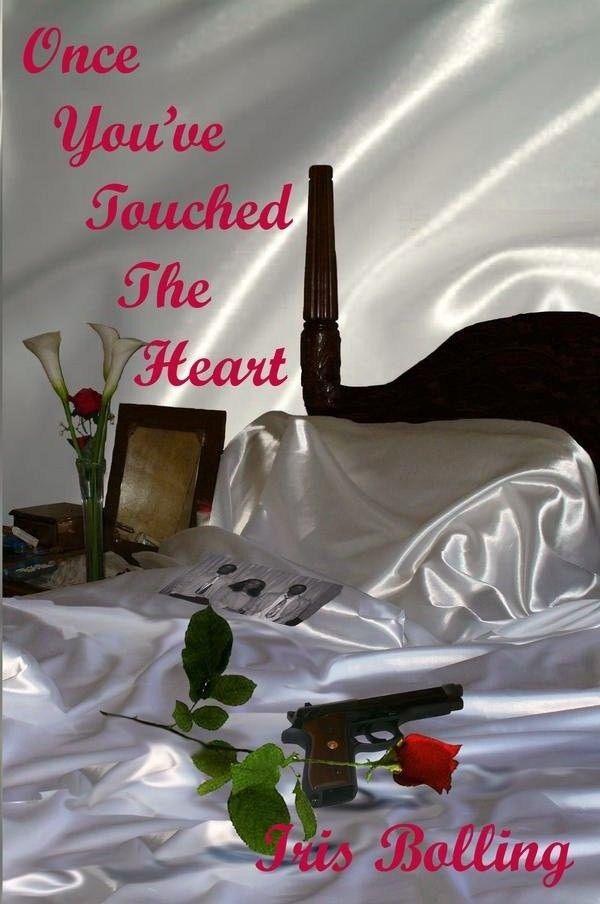 Jeffrey Harrison is anointed with the looks, charisma and political connections to go far. He doesn't realize how far until he meets the one woman who touches his heart like no other. Tracy Washington's innocence and purity overwhelms him and even though she's his sister's best friend, he can't stop thinking about her. The forces of nature bring the two together and the sky is the limit for this couple. The trials and tribulations that Jeffrey and Tracy endure on their journey together bring them closer, to a place where neither of them imagined. But will their dreams be derailed by jealous people, family skeletons and his dangerous career?

No part of this book may be reproduced in any form or by any electronic or mechanical means including information storage and retrieval systems, without permission in writing from the author. The only exception is by a reviewer, who may quote short excerpts in a review.

This is a work of fiction. Names, characters, places and incidents are with the product of the author’s imagination or are used fictitiously, and any resemblance to actual persons, living or dead, business establishments, events, locales is entirely coincidental.

To my Heavenly Father, Thank You.

To Raymond, thank you for putting up with me all these years. The best is yet to come.

To my mother, Evelyn, don’t think you can really retire now; you have more research ahead of you.

To Turk, much love for you, big brother.

To LaFonde Harris and Gemma Mejias, thank you for being my sounding boards and I pray my telephone calls will never go unanswered.

To Valerie Johnson, Tanya Thompson and Rosaline Terry, do not ever learn restraint, stay real….

To Linda Gordon, thank you for simply taking the time.

To the “HU” boys, Devin, Jarrell, Scott, and of course, Chris, you guys are the epitome of awesomeness.

To all of my readers, your wait is over. JD and Tracy have finally arrived. Thank you for your patience. Enjoy their story and the beginning of a saga of love, politics and intrigue that will lead to the White House…on Pennsylvania Avenue.

This book is dedicated to my son, Chris. Regardless of what life brings you, always believe in yourself.

ONCE YOU’VE TOUCHED THE HEART

THE HEART OF HIM

LOOK INTO MY HEART

Once You’ve Touched The Heart

W
e all go through life wondering if the old saying is true, “God has a plan for everyone. He made that special someone just for you. All you have to do is be patient and wait for him to reveal that one person to you.” We have no idea who that person may be, or if that person exists. Nevertheless, we go through life trying to find that someone to fulfill our meaning for life.

We go out with men and women who we know are not right for us. Like the guy who comes up to you in a club and says, “If your left thigh was Thanksgiving and your right thigh was Christmas, can I visit you in between the holidays?” You laugh, but end up dancing with the fool anyway. Yes, you are desperate. But you are also tired of being alone. Everyone around you seems to be going out and having a good time while you are sitting in the dorm room with a book on a Friday night. So which do you choose? Well, Tracy Alexandria Washington chose the book. The fool could spend the holidays by himself.

Tracy, the youngest of four children, was a quiet girl who spent most of her time in libraries. Any library would do; it didn’t matter, as long as there were endless books. She could get lost in them forever. Books were a comfort and escape from the day-to-day drama in her life. As long as a library was open, Tracy had a safe haven
.

Home was empty these days for her. None of the love and laughter that surrounded her as a child existed under the roof she once shared with her parents, two sisters and brother. Within the short time span of one summer, she lost her oldest sister Valerie to a husband; her brother Turk to the street life; her sister Joan died and her father—well, he just
disappeared
.
Now, only Tracy and her mother, Lena, lived together; or more like existed under the same roof together. It seemed Tracy was always doing something to upset her mother, so she stayed away as much as possible.

Tracy never really knew what happened to her sister Joan and did not see her sister Valerie too often, but her brother Turk would come by to check on her. Turk spent time teaching her things, like dancing, shooting pool or hitting three pointers on the basketball court. He gave Tracy the love and guidance she believed her father would have given, if he were home.

For some reason, Lena blamed Tracy for her dad leaving and acted as if she hated the sight of her. Tracy was young and didn’t understand. For a while she tried everything she could to make her mom love her again, but it didn’t work. By the time Tracy reached high school, she simply gave up. She put all her time into studying to earn scholarships for college. Turk said he would help her if she did well in school. Tracy never asked how, but Turk always had money to do things. Therefore, if he said she could go to college, she believed him.

Tracy graduated from high school with honors and received scholarships, but not enough to attend Harmon University. But, true to his word, Turk was there in her time of need. You see, Harmon was a private university where, not all, but most girls went with the hope of meeting the next basketball player heading to the NBA, or maybe the next NFL prospect anticipating a signing bonus. Tracy, on the other hand, wanted to go there because it was away from home and it had an excellent five-year MBA program. The tuition was extremely high, but the biggest obstacle was the up-front cash needed to get in. Her scholarship money would not post to her account until later in the semester. Tracy had no idea where the money she needed was going to come from. But Harmon University was where she wanted to go. She didn’t know why, but in her heart she knew that was the only school for her.

Jeffrey Daniel Harrison, better known to all as JD, was an assistant district attorney with the city of Richmond, which had one of the highest per capita murder rates in the country. Most of the murders were gang related. The city was where he wanted to be. JD wanted to help clean up the city that his father lost his life protecting. His father died at the hands of a 14-year-old gang member. Now JD was responsible for the family his father left behind. Even though they were financially stable, it was up to him to keep the family united. His father would say to him, “No matter what, make sure you always take care of your family.”

James and Martha Harrison raised their children in a very loving environment. They would get their children up on Sunday mornings, have breakfast, and then head off to Sunday school and church. Afterwards, family and friends would come over for dinner. Both parents, or at the very least one parent, would be at every game JD had or at every recital Ashley, his little sister, performed. His parents had a strong sense of family and community values, and they showed it. As a police officer James Harrison was looked upon as the authority figure to the fatherless boys in the neighborhood. He tried to intervene whenever he saw one of the boys going in what one may call “the wrong direction.” Martha Harrison always had food on the table for the hungry and a pleasant word for anyone in need. JD and Ashley were raised to help others less fortunate than themselves. It was just a way of life for them. JD understood this and accepted the responsibility of looking out for others at a very young age. When his little sister would get into fights in school, usually for taking up for someone else, he would go to the school and argue her case until the principal simply got tired and gave in.
Afterwards, he would go home and try to argue Ashley’s case with his mom; but that was a lost cause. Martha Harrison did not care who Ashley was taking up for, fighting was not the way to do it.

JD always had many friends. For some reason people always liked him; but none more than “the boys,” his friends Calvin, Brian and Douglas. They had been with him through the high school basketball championships, the football games and many other escapades that probably should never be mentioned. Calvin graduated from law school along with JD. He was the one voice of reason; he would get the boys to think about their actions before they got into trouble. Brian, who joined the FBI after college, was the protector. If you wanted a piece of the boys, you had to go through him first. Douglas was the oldest and the one with the business mind. He started a promotional company after high school and now owned one of the most exclusive clubs in the city. JD could turn to any one of them in any situation and he knew they would have his back. To them, he was the one each of them looked up to for answers to just about every question. If you asked them, each would say, “That boy is going to run the country one day.” Whether it was business, law or women, they were there for each other.

Women: now that was one area where JD never seemed to have a problem. They seemed to come out of the woodwork for him. He never allowed any one woman to get too close. He had career plans to move up in the district attorney’s office. His focus was to eliminate, or at the very least reduce, gang activity in the city. It was the only way he knew to honor his dad’s life. There was no time for the drama women brought with them. Whenever his current girlfriend began with the drama, he would let her go. In a nice way, of course, but she had to go.

Presently, JD’s problem was convincing the admissions counselor that his little sister was Harmon University material. Her grades were fine, as were her S.A.T. scores. However, the extracurricular activities that had landed her on the suspension list in high school more than once were not quite what Harmon University was looking for in a potential student. But Ashley had her heart set on Harmon, since some of her friends were going there. She begged JD to get her in. He was usually firm with women, but when it came to his little sister he could not say no. Fortunately for her, the admission counselor was a female. He worked his magic and got Ashley in at the last minute. Little did JD know, it was more his destiny for Ashley to be at Harmon than it was hers.

The Pleasures of Autumn by Hunter, Evie
Fire & Ice by Anne Stuart
The Spider's House by Paul Bowles
Man on Two Ponies by Don Worcester
The Shadow Girls by Henning Mankell
Catch a Mate by Gena Showalter
Castro's Dream by Lucy Wadham
Missing with Bonus Material: The Secrets of Crittenden County, Book One by Gray, Shelley Shepard
Traveling Sprinkler by Nicholson Baker
Smashed by Lisa Luedeke