Read On Killing: The Psychological Cost of Learning to Kill in War and Society Online

On Killing: The Psychological Cost of Learning to Kill in War and Society 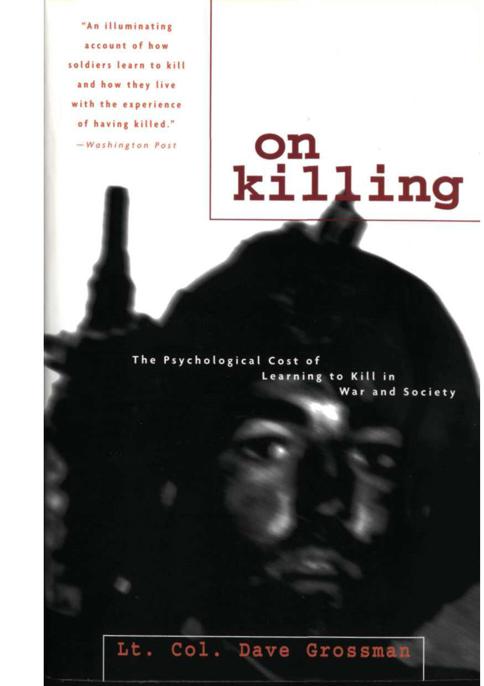 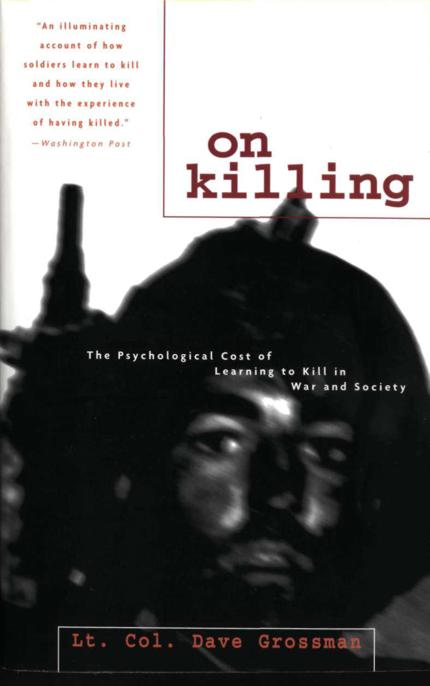 All rights reserved. No part of this book may be reproduced in any form or by any electronic or mechanical means, including information storage and retrieval systems, without permission in writing from the publisher, except by a reviewer who may quote brief passages in a review.

Visit our Web site at
www.twbookmark.com

Permissions to use previously published material appear on pages 352-53.

On killing : the psychological cost of learning to kill in war and society / Dave Grossman. — 1st ed.

Not of the princes and prelates with periwigged charioteers Riding triumphantly laureled to lap the fat of the years, Rather the scorned — the rejected — the men hemmed in with spears; The men in tattered battalion which fights till it dies, Dazed with the dust of the batlle, the din and the cries, The men with the broken heads and the blood running into their eyes.

Not the be-medalled Commander, beloved of the throne, Riding cock-horse to parade when the bugles are blown, But the lads who carried the hill and cannot be known.

Others may sing of the wine and the wealth and the mirth, The portly presence of potentates goodly in girth; —

Mine be the dirt and the dross, the dust and scum of the earth!

Theirs be the music, the colour, the glory, the gold; Mine be a handful of ashes, a mouthful of mould.

Of the maimed, of the halt and the blind in the rain and the cold —

Of these shall my songs be fashioned, my tale be told. Amen.

Introduction to the Paperback Edition

Section I Killing and the Existence of Resistance:
A World of Virgins Studying Sex

Chapter One Fight or Flight, Posture or Submit, 5

Chapter Four The Nature and Source of the Resistance, 37

Section II Killing and Combat Trauma: The Role of
Killing in Psychiatric Casualties

Chapter One The Nature of Psychiatric Casualties: The Psychological Price of War, 43

Chapter Two The Reign of Fear, 51

Chapter Three The Weight of Exhaustion, 67

Chapter Four The Mud of Guilt and Horror, 74

Chapter Five The Wind of Hate, 76

Chapter Six The Well of Fortitude, 83

Chapter Seven The Burden of Killing, 87

Chapter Eight The Blind Men and the Elephant, 94

Section III Killing and Physical Distance: From a
Distance, You Don't Look Anything Like

Chapter One Distance: A Qualitative Distinction in Death, 99

Chapter Two Killing at Maximum and Long Range: Never a Need for Repentance or Regret, 107

Chapter Four Killing at Close Range: "I Knew That It Was up to Me, Personally, to Kill Him," 114

Chapter Seven Killing at Sexual Range: "The Primal Aggression, the Release, and Orgasmic

Section IV An Anatomy of Killing:

Chapter One The Demands of Authority: Milgram and the Military, 141

Chapter Two Group Absolution: "The Individual Is Not a Killer, but the Group Is," 149

Chapter Three Emotional Distance: "To Me They Were Less than Animals," 156

Chapter Four The Nature of the Victim: Relevance and Payoff", 171

Chapter Five Aggressive Predisposition of the Killer: Avengers, Conditioning, and the 2 Percent

Chapter Six All Factors Considered: The Mathematics of Death, 186

Section V Killing and Atrocities: "No Honor Here,
No Virtue"

Chapter One The Full Spectrum of Atrocity, 195

Chapter Three The Entrapment of Atrocity, 214

Chapter Five The Greatest Trap of All: To Live with That Which Thou Hath Wrought, 222

The Killing Response Stages: What Does

Applications of the Model: Murder-Suicides,

Lost Elections, and Thoughts of Insanity, 241

Section VII Killing in Vietnam: What Have We Done
to Our Soldiers?

Chapter One Desensitization and Conditioning in Vietnam: Overcoming the Resistance to Killing, 249

Chapter Two What Have We Done to Our Soldiers? The Rationalization of Killing and How It

Chapter Three Post-Traumatic Stress Disorder and the Cost of Killing in Vietnam, 281

Chapter Four The Limits of Human Endurance and the Lessons of Vietnam, 290

Killing in America: What Are We Doing

Desensitization and Pavlov's Dog at the

B. F. Skinner's Rats and Operant

Conditioning at the Video Arcade, 312

Social Learning and Role Models in the

The Resensitization of America, 323

War has always interested me; not war in the sense of maneuvers devised by great generals . . . but the reality of war, the actual killing. I was more interested to know in what way and under the influence of what feelings one soldier kills another than to know how the armies were arranged at Austerlitz and Borodino.

I have been assisted in this study by a host of great men and w o m e n w h o have stood beside me and gone before me in this endeavor.

These I do n o w gratefully acknowledge.

To my wonderful and infinitely patient wife, Jeanne, for her staunch support; to my mother, Sally Grossman; and to Duane Grossman, my father and co-conspirator, whose many hours of help in research and concept made this book possible.

To the Indian Battalion of Arkansas State University, the finest R O T C battalion in the U.S. Army. To my fellow soldier-scholars among the R O T C cadre, to all my dear friends among the staff and faculty at Arkansas State University, and particularly to Jan Camp, w h o helped much with preparing the final draft and getting quotation authorizations. And most of all to my young R O T C

cadets at Arkansas State; it is currently my privilege to teach them, and my honor to initiate them into the way of the warrior.

To Major Bob Leonhard, Captain Rich Hooker, Lieutenant Colonel Bob Harris, Major/Dr. Duane Tway, and that indomitable team, Harold Thiele and Elantu Viovoide: peers, friends, and fellow believers w h o have endured many a crude draft and contributed much time and effort to assisting and supporting me in this work.

To Richard Curtis, my literary agent, who contributed significantly and then waited long and patiently for the completion of this work. And to Roger Donald and Geoff Kloske, my editors at Little, Brown and Company, who had faith in this book and then worked long and hard to help me to fine-tune it into a professional product. And to Becky Michaels, my publicist, a true professional who has been faithful during the hard part.

To that magnificent group of soldier-scholars at the U.S. Military Academy whom I had the privilege of working with: Colonel Jack Beach, Colonel John Wattendorf, Lieutenant Colonel Jose Picart, and all the gang in the PL100 committee. And to that superb group of West Point cadets who volunteered to spend their summer conducting interviews, testing some of the theories presented in this book.

To my fellow students at the British Army Staff College at Camberley, England, who provided me with one of the finest and most intellectually stimulating years of my life.

To all of those remarkable soldiers who have molded, mentored, befriended, and commanded me, patiently giving of their wisdom and experiences over twenty years: First Sergeant Donald Wingrove, Sergeant First Class Carmel Sanchez, Lieutenant Greg Parlier, Captain Ivan Middlemiss, Major Jeff Rock, Lieutenant Colonel Ed Chamberlain, Lieutenant Colonel Rick Everett, Colonel George Fisher, Major General William H. Harrison, and countless others to whom I owe so much. And to Chaplain Jim Boyle: Ranger buddy, friend, and true brother. For most of these this is not their current rank, but that was what they were when I needed them most.

To Dr. John Warfield and Dr. Phillip Powell, at the University of Texas at Austin, who gave unselfishly of their wealth of wisdom and knowledge, while trusting me and letting me do it my way.

And to Dr. John Lupo and Dr. Hugh Rodgers at Columbus College, in Columbus, Georgia, from whom I learned to love history.

panion during my stay in England, and along with Richard Holmes and John Keegan he is one of the world's true giants in this field today. And I particularly want to note that this study would have been much more difficult to complete without drawing on the tremendous body of insight and personal narratives collected in Richard Holmes's book
Acts of War.
Holmes's superb book will be
the
primary reference source for generations of scholars who study the processes of men in battle. My correspondence with him has confirmed that he is a gentleman, a gentle man, and a soldier-scholar of the highest order.

And I need to recognize that one of this study's most valuable and unusual sources of individual narratives has been the pages of
Soldier of Fortune
magazine. The image of the traumatized Vietnam veteran being spit upon, insulted, and degraded upon return to the United States is not mythical, but based upon literally thousands of such incidents — as chronicled in Bob Greene's excellent book,
Homecoming.
In this environment of condemnation and accusation, many Vietnam veterans felt that they had only one national forum in which they could attain some degree of closure by writing of their experiences in a sympathetic and nonjudgmental environment, and that forum was
Soldier of Fortune
magazine. To those who would prejudge this material and automatically reject anything coming from this quarter as mindless machismo, I ask that you read these narratives first. I am particularly indebted to Colonel Harris for his recommendation of this novel resource, and for the loan of his personal collection of these magazines. Most of all I need to thank Colonel (retired) Alex McColl, at
Soldier of Fortune,
for his support in using these quotes. It is good to know that there are still places where an officer is a gentleman, his word is his bond, and that is all that is required.

Last, and
most important,
to all the veterans throughout history who have recorded their responses to killing, and to those in my own life who permitted me to interview them. To Rich, Tim, Bruce, Dave, "Sarge" (Arfl), the Sheepdog Committee (who still share a wonderful secret with me), and a hundred others who have shared secrets with me. And to their wives, who sat beside them and held their hands while they wept and told of things they had never told before. To Brenda, Nan, Lorraine, and dozens of xii A C K N O W L E D G M E N T S

others. All those w h o spoke with me have been promised anonymity in return for their secret thoughts, but my debt to them is such that it can never be paid.

To all of these I wish to say thank you. I do truly stand on the shoulders of giants. But the responsibility for the report given from this august height is strictly my own. Thus, the views presented here do not necessarily represent the views of the Department of Defense or its components, the U.S. Military Academy at West Point, or Arkansas State University.

War has often been a sexist environment, but death is an equal opportunity employer. Gwynne Dyer tells us:

Women have almost always fought side by side with men in guerrilla or revolutionary wars, and there isn't any evidence they are significantly worse at killing people — which may or may not be comforting, depending on whether you see war as a male problem or a human one.

With but one exception, all of my interviewees have been male, and w h e n speaking of the soldier the words of war turn themselves easily to terms of " h e , " " h i m , " and "his"; but it could just as readily be "she," "her," and "hers." While the masculine reference is used throughout this study, it is used solely out of convenience, and there is no intention to exclude the feminine gender from any of the dubious honors of war.