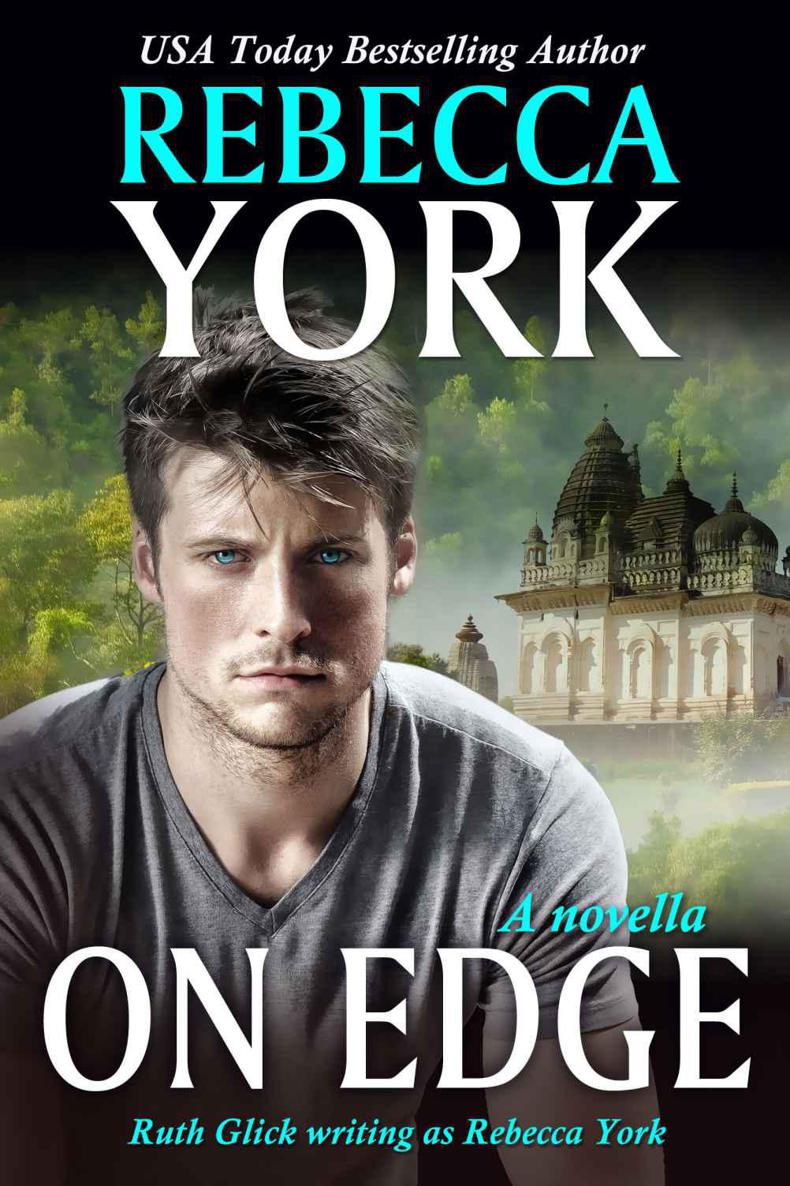 ON EDGE is a prequel to the Decorah Security series.

While in rehab at the Naval Medical Center, Navy SEAL Frank Decorah has a paranormal experience that sets the course for the rest of his life

In the darkness of the room, he listened intently, thinking that the sound had been part of a nightmare, one of the many he’d suffered over the past few months. But it came again, and he pushed himself up, listening.

He was sure it was Gordon, the weakest of them. Or the weakest one left. Patrick and Jordan were already dead. Not from their injuries but because they’d lost the will to live.

Frank understood that. A time or two he’d been on the edge of giving up. Every man and woman in this hospital unit had wondered how he could go on. But Frank had hung on with dogged determination—perhaps from the conviction that something good was coming, although he had no concrete reason to believe it.

He ran a hand through his dark hair, wanting to call out to the man down the hall who had screamed, but he wasn’t going to wake the others. They needed their sleep if they were going to face the grueling ordeal of the next day.

The staff referred to it as physical therapy. The men and women in the program knew it stood for pain and torture. Yet they also knew it was the only way to make your battered body functional again.

He glanced at the lighted clock on the bedside stand. Two in the morning—when human biorhythms were at their lowest.

Glad that he was wearing gym shorts and a tee shirt instead of one of those obscene hospital gowns where your ass hangs out the back, Frank swung his legs over the side of the bed.

Well, the leg he had left. Thank God it was only one leg that was missing. Gordon had come home with both lower limbs blown off. Other guys had lost their legs and their penis. Some were missing both legs and an arm. He didn’t know how you coped with that much physical destruction. One missing limb was bad enough. But he hadn’t been given the choice of injuries, when his team had been sent on a desert raid gone bad. Nick had been to the right of him, the man who had stepped on the land mine. He’d been killed outright. And Frank had taken some of the blast in his right leg. Lew had saved Frank’s life by getting a tourniquet onto the leg with the gushing artery. Martin hadn’t been so lucky. He’d died in the medevac helicopter.

Frank sighed. The remaining members of the team were off in Iraq again—with some new guys filling in the blank places. And Frank Decorah was here at the Naval Medical Center in Bethesda, prepping to face the rest of his life.

His crutches were between the bed and the night table, and he used the side of the bed for support as he inched close enough to grab one and shove it under his right arm. Except for the missing leg, his body was in excellent shape. The PT team in the hospital had made sure of that.

When he got both crutches into place, he took a moment to steady himself, then used the motion he’d learned to swing himself across the room on his good leg. He’d gotten pretty good at it. They had you up and moving around faster than he would have thought possible. And he was even getting damn good at using the prosthesis that substituted for his left leg from just above the knee. But there was no time to put the thing on now, not if he was going to get to Gordon in time.

He didn’t know exactly “in time for what,” but he made a quick exit from his room and started down the hallway. Although the night lights were on, the corridor looked eerie, like he’d stumbled out of the hospital and into an underwater scene. Plus the pungent antiseptic smell that masked the scent of bodily fluids was missing.

At the end of the corridor, he could see the nurses’ station, but it looked like the women were asleep at the desk.

He wanted to shout, “Wake up,” but he kept his lips pressed together because that would break the spell.

He pushed that weird thought out of his mind and clumped on.

He made it to Lieutenant Gordon’s room and stopped abruptly in the doorway, feeling an arctic chill wafting toward him. Inside, he could hear voices. Gordon and someone he didn’t recognize.

“Let me ease your pain.” The woman’s voice was low and soothing, yet it set Frank’s teeth on edge.

“This is so hard for you. You’ve given so much. Too much. You know you want to let go. Just open yourself to me, and all this can be over. I’ll make the end sweet and comforting for you.”

“Is that what you really want? Do you want to live the rest of your life as a helpless cripple?”

The conversation made the hairs on the back of Frank’s neck prickle.

Who was speaking to Gordon? It didn’t sound like one of the hospital staff—or anybody else who should be here. Frank wanted to tell himself he’d never heard that voice before, but he knew it would be a lie. He had heard it. In his own room, in the dark hours of the night when he had been at his sorry worst.

Whoever was in there, he didn’t want to get close to her again. But he had to stop what was happening—even if he didn’t understand it.

His lips set in a grim line, he pushed into Gordon’s room in as much of a rush as he could muster.

The sight that greeted him made his heart stop and then start to pound. A woman dressed in a slinky black evening gown and black stilettos was leaning over the wounded Navy officer’s bed. He couldn’t see her face because it was hidden by a curtain of long, blond hair, but he knew she desperately wanted something from the man in the bed, something that would kill him if he surrendered to her.

For the first time since he’d awakened, Frank spoke. “Get the hell away from him.”

Startled, she turned, fixing her gaze on Frank. At first glance, she was young and beautiful, her skin a glowing alabaster, her eyes the color of midnight, her mouth a perfect red bow like a woman in a lipstick advertisement. But as he took her in, he saw that the beautiful face was only a mask. Below it was a quality that he couldn’t quite grasp, but it carried a warning that made his chest tighten painfully.

She tipped her head to the side, staring at him, clearly taken unawares. “How are you here?” Her voice carried both a note of accusation and shock.

“I heard Gordon call for help.”

“Go back to your bed. Sleep.” The words were a command, pounding at him like a physical blow, knocking him backwards so that he almost lost his balance. Somehow he managed to stay upright with the help of the crutches. When he was sure of his footing, he clumped his way farther into the room, fighting his blurring vision and the icy chill sinking into his skin.

“Leave him the hell alone,” he issued his own order, punching out the words.

She stayed where she was. “This is none of your concern. It’s between me and Lieutenant Gordon.”

“You’re wrong. I’m not going to let you have him.” It felt like iron bands were constricting his chest, making it almost impossible to breathe, but he stamped forward inch by inch. Bracing himself on one crutch, he raised the other, swinging it at the woman like a club.

She hissed like a viper, her features flaring with anger as she ducked the blow and caught the crutch, pulling Frank off balance and shoving backwards so that he toppled to the floor, landing heavily, pain zinging through his stump.

The attacker smiled in satisfaction, then advanced on him, her face swimming in his vision.

“I’ll teach you not to meddle in my business.”

He fought to drag in air, fought to hang on to consciousness as invisible needles probed into his skin, sending shock waves of pain all the way to the marrow of his bones. He was going to die there on the floor of Roger Gordon’s room.

Dimly he heard running feet in the hallway. Before the woman in black could finish him off, someone else sprang through the door, another woman. She was dressed like the nurses, but he was sure he had never seen her in the hospital before.

The woman in black whirled to face her, the two of them poised for battle like combatants who had fought each other many times before.

The nurse—if she was a nurse—advanced on the apparition, her hand outstretched, and Frank thought he saw a bolt of lightning spring from her fingers.

It struck the intended target, drawing a gasp. She backed up, hissing and spitting like a cornered panther. She raised her own hand, hurling her own bolt of lightning, but it stopped and sputtered before it reached its goal.

“Bitch,” the woman in black growled.

For long moments, neither of them moved. Then the woman who had been in the room when Frank arrived gave a small shrug and backed away. As she receded, she seemed to grow less substantial, turning to mist. Or perhaps it was a trick of his blurred vision.

Finally she was gone, and Frank lay panting on the floor.

The nurse came down beside him, and he caught her delicate, feminine scent like a field of wildflowers in spring.

“Are you all right?” she asked, her expression filled with concern.

“Yes.” He glanced at Gordon, wondering how he was reacting, but the man on the bed seemed to be deep in sleep.

Frank sat up and pushed himself backwards across the cold floor so that he was leaning against the wall, his leg stretched out in front of him and his stump still throbbing from the fall.

“Who are you?” he asked the woman who had come to his rescue.

She considered the question. “Yes, but probably not in the way you think,” she answered, her exotic accent something he couldn’t place.

“I heard Gordon cry out.”

She tipped her head to the side, staring at him as he kept his own gaze steady. She was a striking woman with dark hair that hung around her shoulders in waves, eyes a stormy violet, lips a pale pink without the aid of makeup. Her features were delicate, but they held a look of fierce determination. She was about five five, he judged. Six inches shorter than he.

“Lilith was right. You shouldn’t have heard anything, not from your plane.”

She hesitated for a moment before answering. “A mind vampire.”

The words sent a wave of cold skittering across Frank’s skin. “A mind vampire? What are you talking about?”

“She comes in the night for the men who are too weak to fight her.”

“And what do you mean—‘from your plane’?”

“We are not strictly speaking in the material world where humans dwell; it is another realm.”

Caught Forever Between by Adrian Phoenix
Husband by the Hour by Susan Mallery
Inseparable by Brenda Jackson
Panhandle by Brett Cogburn
Second Chance Love by Shawn Inmon
Finding Fiona by Viola Grace
More Than a Kiss by Layce Gardner, Saxon Bennett
The things we do for love. by Anderson, Abigail
The Heiress of Linn Hagh by Karen Charlton
Hell's Children: A Post-Apocalyptic Survival Thriller by John L. Monk