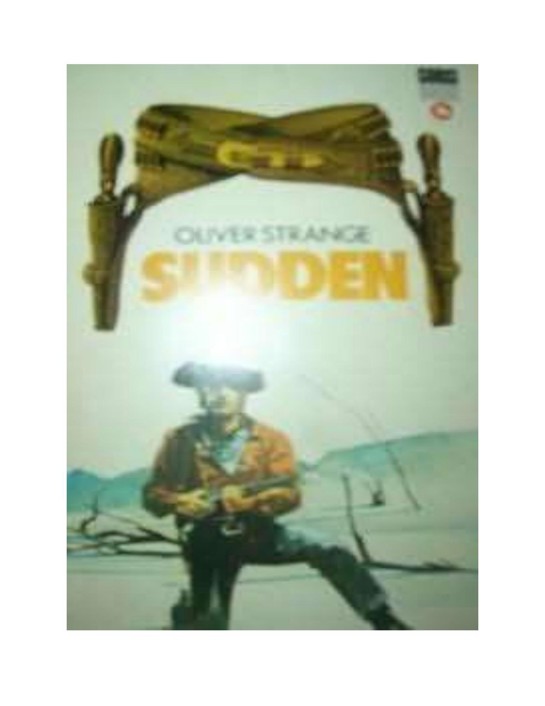 The Marshal of
Lawless ~ Oliver Strange

(Book 03 in the
Sudden Westerns series)

When
Jim Green took on the job of Marshal in the roaring hell town of Lawless, he
soon knew he’d tackled a tough one. But he had no idea just how tough a job it
was until he discovered there was a man pirating around the town on a black
stallion and calling himself ‘Sudden.’

Jim
Green wanted to meet this Sudden personally over six-guns.
Because
Jim Green happened to be the real Sudden…

Out
of a pale blue sky unflecked by the tiniest cloud, the sun, a disk of polished
brass, blazed down, and perhaps for the fiftieth time the red-faced, grizzled
driver of the stage-coach cursed it.

“If
hell’s any hotter’n this, damn me if I don’t go an’ get religion,” he said to
the express messenger who sat on the box beside him.

They
were descending a narrow, winding defile, the weather-scarred, rock walls of
which were bare save for scattered clumps of brush and cactus clinging
precariously where an earth-filled crevice afforded root-hold, and the four
wicked-eyed mules comprising the team required careful handling if the
lumbering vehicle were to reach the end of the decline as a whole. None knew
this better than Bill Eames, the driver; and though he talked, hands and eyes
were concentrated on his job. Lurching, swaying, jolting over a rough road
originally scoured out by torrents and enlivened by chunks of debris from the
ridges on either side the coach went on, and presently, sweeping round a bend,
the finish of the gully came in view. Eames eased his drag on the reins a
little and gave a grunt of relief.

“Allus
glad when I’m through Devil’s Dip,” he remarked. “Dunno why, but I got a
feelin’ that if anythin’ does happen, it’ll be here.”

“Dandy
place for a hold-up,” said the messenger, who was making the trip for the first
time.

With
a curse, Eames flung all his weight on the lines, pulled his scared team to a
standstill by main force and jammed his foot on the heavy brake. With a screech
and a bump the coach stopped, and its driver, still holding the reins, promptly
elevated his hands; he was not paid to fight. The express messenger was, and
when his hands went up they gripped the gun which had lain across his thighs;
it was loaded with buckshot, which would scatter, and was a deadly weapon at
short range.

The
harsh voice appeared to come from a cluster of shrubs some ten yards away. It
seemed to be the only cover near, and the guard, realizing that this was his
sole chance against an unseen foe, fired plump into it. The roar of the report
was instantly followed by the lesser detonation of a pistol-shot and the
messenger slumped forward in his seat to sprawl across the footboard, his
weapon hitting a wheel of the coach and bouncing into the roadway.

The
driver, no stranger to scenes of violence, looked at the stricken man, saw the
puncture in the forehead, with its tiny trickle of blood, and swore through his
clenched teeth; and he did a good job, for when it comes to comprehensive and
highly ornamental vituperation, your Western mule-skinner is gifted above his
fellows. At the same time, risking a like fate, he dropped his arms and strove
to subdue his mules, which, driven out of their senses by the shooting, were
doing their level best to overturn the vehicle.

He
was still busy with the task when a horseman emerged from the bushes. His face
was masked by a common bandana handkerchief slitted for the eyes, further
concealment being afforded by the pulled-down brim of a Stetson. In his right
hand hung a revolver from the muzzle of which a wisp of blue smoke curled. He
was mounted on a big black, with a white blaze between the eyes and a white
stocking on the near foreleg.

“Don’t
try no tricks, driver,” the unknown said, and though his voice had a hard,
metallic ring, the mask muffled and disguised it “I’m sudden by nature as well
as name.” He paused for a moment as if to let the remark sink in, and then,
“Tie yore lines. Whyfor did that fool fixe? I gave him his chance.”

Eames,
having got his team into subjection, looped the reins round the hook at his
side and hoisted his hands again without delay. Even had he meditated making a dash
for it, the avowed identity of the marauder would have negatived the notion. So
this was Sudden, the man whose wizard-like gun-play and daredevil exploits had
made his name a terror in the South-west.

He
did not doubt it; the ruthless slaying of the guard and the holding-up of the
stage single-handed
were
in keeping with the outlaw’s
reputation. The rider paced leisurely up to the coach.

“Heave
the box over,” he ordered.

Eames
reached down and from under the seat lately occupied by the murdered messenger
drew out a small, iron-clamped chest which thudded deeply into the dust of the
trail. The stranger nodded approvingly.

He
dismounted, and keeping a wary eye on the driver, raised the box and methodically
tied it to the cantle of his saddle. Then he turned to the body of the coach.

“Yu
can come out, keepin’ yore paws up,” he called.

Three
passengers crept out from the dark interior and stood blinking in the glare of
the sun. They were a sorry-looking trio. They had heard the shooting, the
clatter of the messenger’s gun as it fell, the curses of the driver, and had
guessed the rest. Their trembling hands, thrust stiffly upwards, betrayed their
fear. The outlaw surveyed them sardonically. Two were obviously drummers from
the East, while the third, a man of middle age, dressed in shabby black with a
soiled white collar, might have passed for a minister of some denomination,
though his coarse, bloated face was hardly in keeping. It was to him the outlaw
addressed himself.

“I
am a poor servant of the Lord, brother,” the man in black replied unctuously.

“An’
a mighty poor one at that, I’m bettin’,” was the sneering comment. “Well, yu
oughta know how to take up a collection anyways—first thing yu fellas learn—so
go through ‘em, an’ don’t yu miss anythin’ or yore flock’ll be shy a shepherd.”

He
gestured with his pistol, and aware that protest would be futile, the man
proceeded to despoil his fellow-passengers. The result was meagre enough; a
small amount of currency and a little flash jewellery. Their grips, which the
collector had to fetch from the coach and open, contained only clothing and
samples. The road-agent shrugged his shoulders.

“Chicken-feed,”
he said, and pointed to several flat boxes in one of the grips. “
What’s
them?”

The
question awoke the business instinct in the quaking breast of the owner of the
boxes.

Possibly
he hoped to placate this grim devil who might at any moment take it into his
head to shoot them down.

“Say,
sport,” he quavered, “dat’s de finest smokin’ proposition ever offered in de
West for two bits a t’row. Try one an’ tell me if I’m a liar.”

The
outlaw took out one of the cigars, smelt it, broke it in two and flung it away.

“Yu
shore are
,” he said, and kicked the pile of samples
broadcast. Turning to the other commercial, he growled, “What’s yore line?”

“Nobody’d
never
suspect yu of it,” the outlaw said with heavy
sarcasm, and faced round on the man in black. “Cough up,” he ordered.

“I
have no worldly wealth, friend,” that worthy replied.

“Yu
got a friend here?” asked the other acidly.

His
fierce eyes studied the self-styled minister keenly for a moment. Then, with a
swift motion he holstered his pistol, seized the lapels of the black
frock-coat, jerked them up, and down over the wearer’s shoulders, thus
pinioning his arms. The victim smothered an unclerical expression, and the
road-agent laughed.

From
under the left armpit of the “minister” peeped the butt of a double-barrelled
Derringer, hung in a shoulder holster. The stranger drew it out.

“I
go into wild places an’ carry it for my protection,” replied the owner evenly.

The
outlaw stuck the weapon in his own belt and began to pass his hands lightly
over the other’s clothing. A bulge in a pocket attracted him; it proved to be a
pack of cards. The possessor’s face did not alter, but his voice was sullen
when he explained:

“I
took them from a gambler.”

The
road-agent had squared the pack up on the palm of his hand, delicately, using
the tips of his fingers only.

With
a vigorous sweep of his arm he flung the pack skyward, scattering the cards far
and wide, and then resumed his investigation. Another bulge produced a fat roll
of bills, at the sight of which the searcher gave vent to a throaty laugh.

Fire at Twilight: The Firefighters of Darling Bay 1 by Ashe, Lila
Ashes Under Uricon (The Change Book 1) by Kearns, David
Heart's Haven by Lois Richer
When Elves Die : Episode One by Richard Poche
The Professor of Truth by James Robertson
Murder at Hatfield House by Amanda Carmack
Fall Girl by Toni Jordan
And West Is West by Ron Childress
Opium by Colin Falconer
Agentes del caos by Norman Spinrad