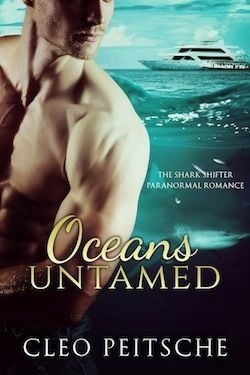 OCEANS UNTAMED
© 2014 by Cleo Peitsche. All rights reserved worldwide. No part of this book may be reproduced in any form or by any electronic or mechanical means without permission in writing from the author. This is a work of fiction. All names, characters, events, locations and incidents are either the product
of the author’s imagination or are used fictitiously, and any resemblance to any persons, living or dead, events or locales is entirely coincidental. This book is for entertainment purposes only.

This book contains mature content and is solely for adults.

Thank you for purchasing this ebook. I hope you enjoy reading it as much as I enjoyed
writing it, and I look forward to sharing more of my stories with you.

Why join my mailing list?
Because I release new stories at a special price to thank my readers!

Other Titles By Cleo

Trapped by a Dangerous Man

Wanted by a Dangerous Man

Saved by a Dangerous Man

Tempted by a Dangerous Man

Seduced by a Dangerous Man

Dared by a Dangerous Man

Master of the Deep

Blood in the Water (coming soon)

The extreme measures billionaire shark shifter Koenraad took to save Monroe’s life has made her a target. She needs the shark’s protection more than ever, but when the truth surfaces about the identity of her attacker, she’s too hurt to trust the only one
who can help her.

Years of lies and double lives close in on Koenraad with the discovery of a crime scene. He’d thought he had nothing left to lose, but he was wrong. Sexy, curvy Monroe might be the love of his life. Keeping her close is selfish, but letting her go is impossible. Staking his claim feels right, but would it be fair to bind her to an illusion?

Monroe walked through the spacious hotel lobby, her flip-flops slapping against the polished marble floor.

She gripped her cell phone in one hand, her pink sweater in the other. The temperature inside the hotel was comfortable, but she suspected she’d be going outside. Caribbean nights could be downright chilly, and her knee-length cotton dress wouldn’t be much protection.

This hotel, unlike the one she’d previously stayed at, included a night guard in a starched uniform. He was pacing, hands behind his back. He paused to acknowledge Monroe with a nod and a slight tightening of his lips that was probably meant to be a smile. At the other end of the lobby, the petite clerk was fussing with the immaculate floral arrangements.

Monroe felt bad for them both. It wasn’t
even five in the morning, and no one was around. She certainly didn’t count as a rich, finicky guest; she was wearing plastic sandals. The guard especially must have been going crazy with boredom.

She was about to ask him if he’d happened to notice any exceptionally tall men with light blond hair when she caught a glimpse of the ocean through one of the lobby’s rear windows.

That’s where Koenraad
would most likely be… unless he’d left the hotel completely and hadn’t bothered to tell her.

She’d worked something out. Koenraad had saved her life after a shark attack by giving her a transfusion of
his healing blood. That he admitted. He also had bite marks on his lower back. That he wouldn’t talk about.

Obviously he’d fought the shark to save her. She’d turned it over and over in her mind, and it was the only logical explanation.

She didn’t see why he wouldn’t talk about it, why he got weird when she mentioned the scars. Maybe he’d had to kill the shark and that made him uncomfortable,
or maybe he thought it would upset her. It didn’t. A dead man-eating shark was nothing to mourn.

If anything it was a hell of an aphrodisiac, and it made her fall for him even harder. His scars were physical proof that he cared.

Outside, the night was cool, a direct contrast to the usually steaming days. Still, it was bearable. Monroe had no idea how the locals managed to deal with the swings
in temperature.

She sank into white, soft Caribbean sand as she veered off the paved path. She and Koenraad had strolled this way before, and she knew that a few minutes down the beach was a little pedestrian pier with a gazebo at the end. Koenraad had remarked that it looked peaceful.

Sure enough, there was someone sitting at the edge, legs dangling over the water. It had to be Koenraad.

She came up behind him, not bothering to announce herself. He was a shark, and she now knew that his senses were so acute that he might have even heard her walking across the lobby. Though the crashing of the waves was pretty loud…

“You can’t sleep?” he asked. He looked up, his sculpted features mostly in shadow. It made him seem both familiar and mysterious, and fit what she knew of him, which
was both too much and not nearly enough.

She impulsively stroked a hand through his tousled, silky hair. She liked him at this angle, looking up at her. He was still coiled muscle and restrained power, but he was less intimidating like this. She’d have liked him even better if she were in his lap, helping him out of his shorts—

No, don’t think about that,
she remembered belatedly. Koenraad
had proven that he was capable of smelling her arousal.

Her cheeks heated, and when she realized he could probably smell her blushing or something, her entire face burned.

“Monroe?” Koenraad’s eyebrows were knitting together.

“I woke up and you were gone…”

He patted the spot next to him, and Monroe carefully sat, making sure the back of her dress was between her thighs and the wooden boards.
Her flip-flops dangled from her toes, and she flexed her feet to keep the sandals from tumbling into the ocean.

“Sorry,” he said. “I only need a couple of hours of sleep, and I didn’t want to wake you. How are you feeling?”

“That wasn’t an idle question.” He brushed his fingers against her side where the shark had bitten her. Heat trailed his touch.

“Oh.” She took stock of herself.
“I still don’t remember anything, and I feel… great. If not for the untanned skin, I’d never believe I’d almost died.”

“I never would have let you die. Ever.”

His silence seemed heavy, like he wanted to tell her something, but in the end he raised his arm and pulled her in close. Given all they’d been through the last few days, leaning into his solid, masculine body felt
good.

He didn’t say anything, didn’t sigh or react at all.

“I’ll get started early. Then we can meet for a late lunch and take it from there.”

She frowned. There was a major crisis, something horribly wrong with the ocean water. Koenraad had told her it was harming shifters, and several tourists had drowned. That
was far more important than making him run back to the hotel for a hurried lunch. “But I’ll be fine…”

Instead of speaking, he caught her chin and turned her face toward his. His thumb traced the curve of her bottom lip, and her breath caught in her throat. She put her phone and sweater aside and fisted her hand in his shirt just to keep herself from floating into the sky.

Then he kissed her,
and she could smell his aftershave and the incongruously woodsy shower gel he stocked in his mansion and in his yacht bathroom.
Head
. Boats had heads, not bathrooms.

His kiss bordered on sweet, but she wasn’t fooled. Koenraad might play the perfect gentleman, but she knew better; she’d been in his bed.

He was a shark shifter, and sharks used their teeth. If Koenraad was at all typical, they
were dominant and demanding lovers.

They also had “two male organs,” to quote a guide book. That had been a shock, as were the spurs on his thick shafts. She’d seen them, had even touched them, but that was as far as it had gone before Koenraad had pulled away.

Luckily for her—and for Koenraad, she supposed—he could control both of those aspects. The first time he’d taken her, in the middle
of the ocean on his luxury yacht, she hadn’t suspected his anatomy was different from a non-shifter’s.

His lovemaking skills… The man knew what he was doing in bed.

Not that they often made it to the bedroom.

“I can almost hear you thinking,” he said in a low voice, the pitch so deep that when he whispered, it was a challenge to hear him.

She didn’t get a chance to defend her thought processes
because Koenraad bent her backward, his hand cradling her head. He was looking at her, she sensed, but the night was somewhat cloudy, and his eyes often seemed dark because of the huge pupils.

Sometimes they reflected silver, like a wild animal. Just thinking of his eyes, his oversized pupils, gave her the shivers. Here, in the shadows, she could pretend he was just a human. She could pretend
it didn’t freak her out to be so close to an apex predator.

He laid her head on something soft. She raised her hand to feel her sweater.

One of her sandals slipped off her toes, then the other joined it. She didn’t hear the splashes above the sounds of the noisy surf and wind.

“They’ll wash up on the beach,” he said. One of his hands was on her inner knee, determinedly moving higher.

Every
cell in her body came alive. She strained her eyes, tried to see him better. All she had was the outline of his face, his shock of hair hanging down.

“You are so beautiful, Monroe. I wish we’d met a month ago, when everything was less complicated.”

His ascending hand brushed over her bare pussy. It was just a touch, but enough to make her tremble, then he was stroking the swell of her buttock
pressed against the wooden pier.

“I couldn’t find them, and I didn’t feel like digging through my suitcase. Did you know?” she asked as she wiggled closer to him.

“That you were naked under that dress? Yes, I did.”

“Because you can… smell me?”

He laughed and kissed her. “Well, yes, your scent is driving me crazy, but I would have known anyway.”