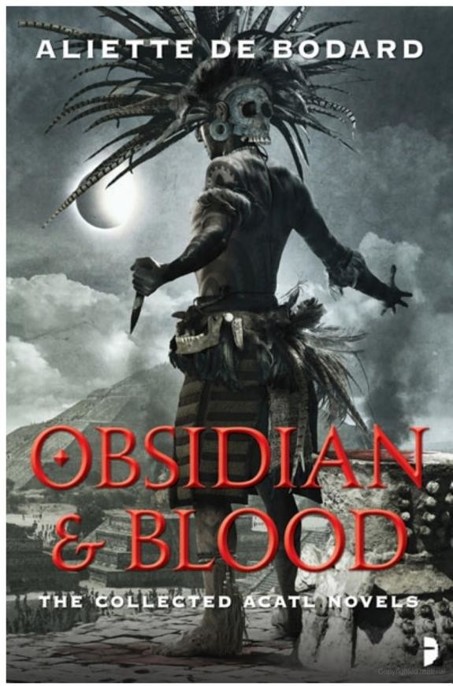 "An amazingly fresh and engaging new voice in fantasy: the shadows of the Aztec underworld drip from these pages."
Tobias Buckell
"Political intrigue and rivalry among a complex pantheon of divinities drive this well-paced murder mystery set at the height of the Aztec Empire in the late 15th century. De Bodard incorporates historical fact with great ease and manages the rare feat of explaining complex culture and political system without lecturing or boring the reader."
Publishers Weekly
"A gripping mystery steeped in blood and ancient Aztec magic. I was enthralled."
Sean Williams
"From page one I was drawn into Acatl's world… a remarkable historically based fantasy, using the myths and legends of the Aztec people as a background to a twisting murder mystery."
Speculative Book Review
"Amid the mud and maize of the Mexica empire, Aliette de Bodard has composed a riveting story of murder, magic and sibling rivalry."
Elizabeth Bear
"I haven't enjoyed a proper detective story this much in ages, and the rich setting, monsters and magic just added an extra layer of delight."
David Devereux
"
Servant of the Underworld
is a highly original debut novel. Thanks to a solid mystery plot and Aliette de Bodard's extensive research into pre-Conquest Meso-America, this novel should strike a chord with more than just fantasy readers."
FantasyLiterature.com
"The book starts out a slow, steady pace and builds momentum from there. It's not some huge action scene that hooks you. It's the atmosphere. The blood spilled to gain favor from the gods. The cultural details Bodard infuses in each moment."
Examiner.com
"It was [the novel's] use of the mythic that I found most interesting: the magical system based upon glyphs and blood seemed very real and provided a rich, numinous texture to the novel."
Red Rook Review
"
Servant of the Underworld
is an incredibly strong and promising debut, showing her talents at full effect – she can create amazing, believable worlds; her characters are solid and relatable, and she knows how to do interesting magic, great action and creepiness in spades."
SFFBook.com
"Part murder mystery, part well-researched historical novel and part fantasy… The fantasy element blends neatly with the other parts. 4****."
SFX Magazine

ALIETTE DE BODARD
Obsidian & Blood
THE COLLECTED ACATL NOVELS
SERVANT OF THE UNDERWORLD
HARBINGER OF THE STORM
MASTER OF THE HOUSE OF DARTS
THE SHORT STORIES
Obsidian Shards
Beneath the Mask
Safe, Child, Safe
INTRODUCTION

Recently, when we moved out of our old apartment into a new, better one, I found a pile of old index cards at the bottom of one of the drawers. When I spread them out on the living room table, I saw, with a surprise, that they were the same cards where I'd jotted down the beginnings of what would become
Servant of the Under
world
. It was all there on the cards: my frustration at figuring out an unfamiliar world, my anger at a plot that wouldn't slot into place, and my bewilderment at my main character, Acatl, whose preoccupations I couldn't understand – seemingly endless nights of spreading out the cards on the table and rearranging them, shuffling them in the hope that everything would coalesce into something I could trust myself to write.
If I look back at those beginnings, five years ago, it seems hard to believe that this little pile of index cards would grow into a book, let alone into a trilogy that spanned three years, dozens of characters, and an entire world beyond the capital city that I'd envisioned as the primary setting of the book.
But it did grow; and so did I, maturing into a better writer as I wrote the novels. Acatl grew as a person, acquired friends and students and allies, and the Tenochtitlan that was a bare word on a piece of paper became a city vibrant with life: with the smells of cooked maize, and the deep sounds of drums welcoming the dawn on the Sacred Precinct; with the vivid colours of feathers and embroidered cotton skirts, and the sound of banquet poems filling the night with beautiful, melancholy words; with the dance of reed boats in the canals, and the cold, chilling passage of the Wind of Knives as He enforced the underworld's justice...
It is a wonderful and thrilling place, and one that I enjoy returning to, again and again. This volume gathers all the stories of this fantastical Tenochtitlan: the three novels that complete the Obsidian and Blood trilogy, and (thanks to the wonders of digital formats) the Acatl short stories that were published in various venues.
I hope you enjoy this journey into Acatl's world.
Aliette de Bodard
Paris, 2012

I
SERVANT OF THE UNDERWORLD
ONE
Odd Summonings

In the silence of the shrine, I bowed to the corpse on the altar: a minor member of the Imperial Family, who had died in a boating accident on Lake Texcoco. My priests had bandaged the gaping wound on his forehead and smoothed the wrinkled skin as best as they could; they had dressed him with scraps of manycoloured cotton and threaded a jade bead through his lips – preparing him for the long journey ahead. As High Priest for the Dead, it was now my responsibility to ease his passage into Mictlan, the underworld.
I slashed my earlobes and drew thorns through the wounds, collecting the dripping blood in a bowl, and started a litany for the Dead:

Grey light suffused the shrine, the pillars and the walls fading away to reveal a much larger place, a cavern where everything found its end. The adobe floor glimmered as if underwater. And shadows trailed, darkening the painted frescoes on the walls – singing a wordless lament, a song that twisted in my guts like a knife-stab. The underworld.

"Obsidian shards are driven into your hands, into your feet,
Obsidian to tear, to rend
You must endure th–"

Curse of the Sphinx by Raye Wagner
Snake by James McClure
Till the Sun Shines Through by Anne Bennett
Nature's Servant by Duncan Pile
The American Lover by G E Griffin
Forever and Ever by Patricia Gaffney
Final Jeopardy by Stephen Baker
Silent Night 2 by R.L. Stine
Search for Safety: Killing the Dead Book Two by Richard Murray
The Academy - Forgiveness and Permission (Year One, Book Four) by C. L. Stone