Read Not Quite Mine (Not Quite series) Online

Not Quite Mine (Not Quite series) 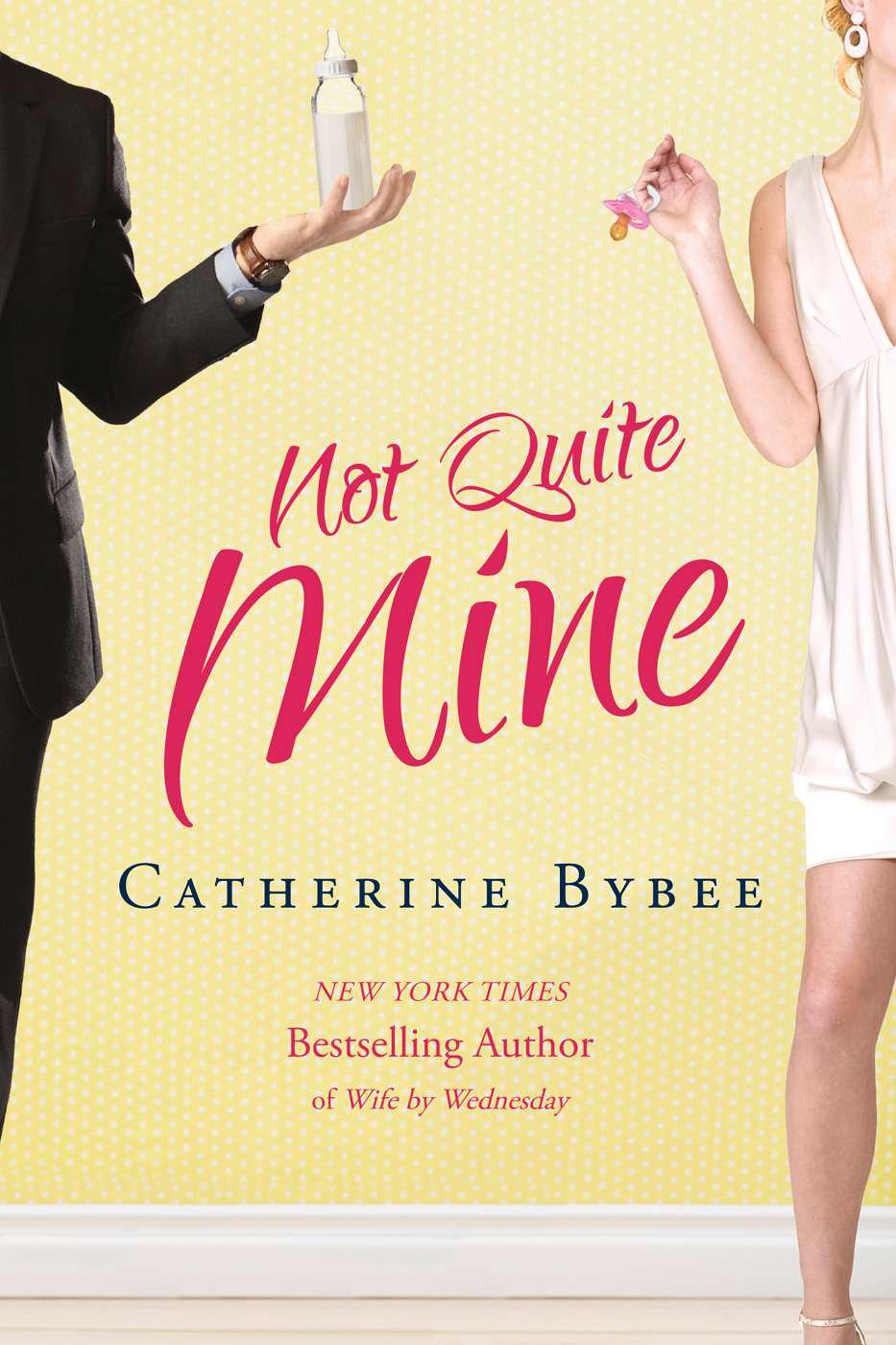 Not Quite Series
Not Quite Dating

The Ritter Werewolves Series
Before the Moon Rises
Embracing the Wolf

Copyright © 2013 Catherine Bybee
All rights reserved.
No part of this book may be reproduced, or stored in a retrieval system, or transmitted in any form or by any means, electronic, mechanical, photocopying, recording, or otherwise, without express written permission of the publisher.

This one is for Kayce

My moral barometer and holiday sidekick.

Katelyn Morrison stood at the altar with tears welling behind her eyes. She forced her attention to the bride and groom and the vows they lovingly exchanged. Her brother, Jack, reached out to his newly adopted son Danny, and took the ring the six-year-old held in his hand. Danny beamed with pride, his smile and sigh caught the attention of everyone in the church. Katie felt the hair on her arms stand on end when Jack winked at the boy. Her brother deserved the happiness he’d found with his bride and her son. Katie couldn’t be more ecstatic about the woman he’d chosen to make a Morrison.

The emotion that choked her up even more, however, Katie didn’t want to name. She had no right to be jealous of her brother. Besides, green wasn’t a color she chose to wear.

Squaring her shoulders, Katie witnessed Jessie place a ring on Jack’s finger and repeat her vows. When the minister instructed Jack to kiss his bride, his dimples appeared as a wide smile spread over his face and he gathered her in his arms. True Texas catcalls and whistles lifted to the eves of the church when Jack dipped Jessie low and let everyone know she was his. When Danny lifted his hand to shield his eyes from their kiss, the cameras in the church went wild.

Katie let out a laugh and ignored the tears falling from her eyes.

Then she felt
him
watching, knew the weight of his stare as she slowly lifted her gaze to the best man.

Dean’s gaze soaked her in.
Looked through her
would be a better way of describing the expression on his face. An unspoken understanding washed over his face and threatened a tidal wave of pain in Katie’s chest. In that moment, Katie held more regret than she’d ever had in her entire life.

Jack and Jessie turned toward the guests at the ceremony while Monica, Jessie’s sister and maid of honor, handed Jessie her bouquet. Katie pulled in her thoughts and memories and moved behind Jessie to fan the train of her dress so she could march down the aisle and not trip on the layers of fabric.

Thank God Jack picked Dean to be his best man and not a groomsman, otherwise bridesmaid Katie would be paired with him for the remainder of the evening. Being this close to him was hard enough. Standing side by side all evening would be torture.

Hell, it was still torture.

The photographer ushered the bridal party outside the church while the guests were funneled in another direction. The bride and groom posed in front of the marble columns and ornate doors. Monica stepped beside Katie with Nicole, the other bridesmaid. A buzz overhead brought everyone’s attention to the sky.

A helicopter hovered over the church.

“Would have been asking too much for them to wait for a press release,” Katie chided.

“I know you said to expect them, but a helicopter?” Monica tilted her head back and shielded her eyes from the sun with her hand.

“With a high powered lens snapping more pictures than the paid photographer.” Having spent the greater part of her life attracting the attention of the media, both here in her hometown of Houston and wherever else she went, Katie was well rehearsed at ignoring their presence. Every mistake she’d ever made, nearly every kiss or affair she’d partaken in, ended up on the cover of a magazine.

“Take the damn picture and go already.” Dean’s voice, even when it was angry, shot up her spine with awareness.

Dean, Tom, and Mike moved closer to the women and shot insults at the hovering chopper.

“At least Gaylord kept the paparazzi on foot far away.”

“Daddy promised them a glimpse from the limo on the way to the reception,” Katie informed the wedding party. “Or a trip to jail for trespassing if they stepped one foot on church property.”

“A night in jail isn’t usually a deterrent.”

The three groomsmen had known Jack and Katie for years. Each one came from a family with money and power and knew the media better than their neighbors.

The noise from the chopper elevated, as did the wind it kicked up.

Danny ran up between Monica and Katie with a worried frown on his face. “Auntie Katie, is that helicopter gonna fall on us?”

She knelt down and took Danny’s hand in hers. The role of auntie might have been new, but the fierce need to protect her nephew and ease his fears was as automatic as breathing. “They wouldn’t dare risk it. Grandpa would tie them up and leave them in the sun to bake if they crashed this party.”

“Ask Grandpa to tell you about the paparazzi and my sixteenth birthday.”

Dean and Tom cleared their throats behind her. She glanced over her shoulder and noticed both of them shaking their heads. A few misguided indiscretions of that day drifted to the surface of her memory. “On second thought, never mind.”

Monica leaned in and offered her own advice. “How about we make faces at them, Danny?”

He shot her a big smile before he lifted his head to the chopper and stuck out his tongue. Laughter filled the small group as each one of them wiggled fingers and contorted their faces toward the sky. Danny’s giggles kept them all animated. Chances were, the photographer in the chopper wasn’t focused on them, but Danny no longer seemed concerned that the hunk of metal was going to land on them.

Even if their faces did end up on the cover of the
Inquisitor
, Katie knew she looked fabulous. The floor length maroon silk dress hugged her curves like a lover’s caress. Lorenzo, the designer, had taken all three of the women in the bridal party into his studio and crafted identical dresses to work perfectly for each of their shapes. How he did it was a mystery. Not that he had to work around anything impossible. Both Monica and Nicole were over five seven and slender. And after a little work, Katie had shown them both the pleasure of designer heels. There was nothing sexier than a shoe that brought a guy’s attention to a shapely calf before sending that attention zinging up a thigh and straight to one’s ass. The second Katie had slid the two-hundred-dollar pumps onto Monica’s feet, she knew she had a partner in crime.

Katie made sure the length of her leg peeked through her dress as she wiggled her fingers by her ears for the paparazzi.

As their laughter ebbed, the photographer waved them all inside the church for more pictures.

Danny took Monica’s hand and pulled her with him as the rest of the party followed.

Katie adjusted her dress to make certain the low cut angle didn’t reveal too much.

“You look amazing.” Dean’s voice was low and heated as he slid up beside her.

She hadn’t realized he’d hung back, and she felt a little trapped in his presence. “You clean up well yourself, Prescott.” Boy, did
he clean up. He brushed his dusty blond hair that always seemed a little long, but at the same time, perfectly right, out of his eyes. His Texas drawl reminded her of home. She’d worked hard to rid herself of her accent when she was younger, thinking it made her sound stupid. Blonde and rich labeled her as dumb, which she fought for some time. It wouldn’t have mattered if she’d become a doctor or a rocket scientist. The world looked at her as an heiress and treated her differently. Around her sixteenth birthday she’d snapped. Her hormones started to rage and her desire to be noticed ruled her brain. Her skirts rode high, her pants skintight. Those designer heels she loved so much pushed her height past most of the boys in school.

But the ones she wanted to look, didn’t.

Katie glanced into Dean’s eyes and quickly looked away. Her body tingled knowing he stood so close. The spicy scent of his skin made her want to lean in and take a deep breath. She fought her desire and found the silence between them painful.

She said the only thing she could think of, and then regretted her words instantly. “I’m sorry about Maggie.”

Dean’s jaw tightened. “It wasn’t meant to be.” Maggie had broken off her engagement to Dean a week before their wedding. According to Jack, there wasn’t an explanation as to why. Then she’d disappeared and asked that Dean not contact her.

Taming the Montana Millionaire by Teresa Southwick
Dirty Truths by Miller, Renee
Marriage Under Suspicion by Sara Craven
bedeviled & beyond 06 - bedeviled & befouled by cheever, sam
Naufragio by Charles Logan
Incidents in the Life of a Slave Girl by Harriet Jacobs
The Mourning Sexton by Michael Baron
Leaving Epitaph by Robert J. Randisi
Duane's Depressed by Larry McMurtry
Spring Will Be Ours by Sue Gee