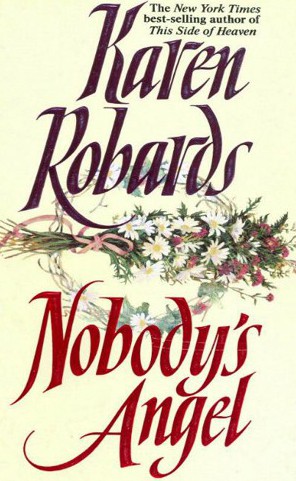 "MS. ROBARDS SEEMS TO KNOW INSTINCTIVELY OUR MOST SECRET THOUGHTS AND THEN DREAMS UP THE PERFECT SCENARIO TO GIVE THEM FREE REIN . . . THE RESULT IS PURE MAGIC."

"ONE OF THOSE WRITERS I BUY WITHOUT NEEDING TO READ A REVIEW . . . THE HIGH TENSION [IS] SUSTAINED THROUGHOUT, KEEPING ME GLUED TO THE PAGES."

"A sizzling spy thriller that will captivate and delight you!
Night Magic
manages to prick your sense of danger while tickling your funny bone. You've got to read it!"

THIS SIDE OF HEAVEN

All rights reserved. No part of this book may be reproduced or transmitted in any form or by any means, electronic or mechanical, including photocopying, recording, or by any information storage and retrieval system, without the written permission of the Publisher, except where permitted by law. For information address: Delacorte Press, New York, New York.

The trademark Dell® is registered in the U.S. Patent and Trademark Office.

Reprinted by arrangement with Delacorte Press

To my nephew, Bradley Nicholas Johnson,

And, as always, with much love to Doug, Peter,

"Susannah, you cannot be serious! You cannot really mean to
buy
a man!" Sarah Jane Redmon's dark brown eyes grew wide with alarm as she took in her older sister's grim expression. There was no reasoning with Susannah when she looked like that, as her family knew from long and bitter experience.

"Pa'll have a fit." That gleeful prediction was made by Emily, at fifteen the youngest of the quartet of Redmon sisters, as she stared over the smaller Susannah's shoulder at Craddock, the family hired man. Craddock was sprawled in a drunken stupor across the newly purchased provisions that filled half of the back of the wagon. Snores so loud as to be embarrassing on this unaccustomedly busy street in the center of Beaufort issued from his open mouth. He lay on his back, muddy boots protruding over the edge of the wagon, a nearly empty bottle tilted precariously in his hand. A silvery string of drool stretched from his slack lips down toward the sack of flour on which his head rested.

"Pa never has a fit at anything Susannah decides. He always says she likely knows best, and so she does." Amanda, seventeen, was the family beauty, and she knew it. She was charming, gay, and much spoiled, though Susannah had tried her best to leaven with firm discipline the worst effects of too much indulgence of her whims on the part of nearly every male Mandy had ever met. But Susannah would be the first to admit that her efforts had resulted in only a tentative success. Men responded to Mandy's radiance as naturally as flowers turned their faces to the sun, and Mandy thrived on their attention. Even as she smiled affectionately at Susannah, her attention was distracted by a trio of fashionably dressed gentlemen passing by on the street. Mandy tossed her auburn curls for their delectation. One gentleman, responding to Mandy's flirtatious glance by slowing and tipping his hat, was seconds later frozen to the marrow of his bones by Miss Susannah Redmon's icy glare. He had no way of knowing that her daunting frown came from much practice and meant nothing personal at all. Thinking the dagger look dredged up for himself alone, the gentleman, much chastened, hurried to rejoin his friends. He would have been affronted had he realized Susannah was barely aware of him as an individual. Her reaction had been no more than a reflex, engendered by endless years of warding off her younger sisters' beaux. Acting as mother- dragon to them had become as natural to her as breathing in the dozen years since their mother's death.

"At least the cursed man sold the sow and her piglets before he succumbed!" Susannah scowled once more at Craddock, then gave up the exercise as useless. He was as insensible to her displeasure as the wood on which he lay. Curbing the impulse to kick the iron wheel nearest her, she dropped her parcels on the floor of the wagon and crawled up beside them. Leaning forward, she thrust her hand into the bulging pocket of Craddock's coat, averting her nose from the smell of sour whiskey that hung around him like a noxious cloud. With a feeling of relief, she found what she sought, an oily doeskin bag well filled with silver coins. Closing her hand around the bag, she offered up a silent prayer of thanks that Craddock had not drunk away her money. She pulled the bag free and stuffed it into the reticule that dangled from her wrist.

"Would you get down? If anyone should see what you're about, they'll likely think you lost to all shame! To actually put your hands on his—his person is beyond what is permissible—and your backside is up in the air!" Sarah Jane's eyes darted nervously over the people making their way along the street. She dreaded encountering someone who knew them, but only strangers were at hand, drawn to usually sleepy Beaufort by the spectacle that was at that moment taking place down by the waterfront. Convicts brought over from England were being sold for indentured servants at public auction, and the event had attracted scores of spectators. A festive atmosphere imbued the town.

" 'Tis our money, goose, from the sale of the hogs we raised! Would you have me leave it where it was, to be spilled out when Craddock rolls over or stolen by some thieving passerby?" There was affectionate exasperation in the look Susannah sent her next sister as she clambered off the buckboard. Susannah loved the twenty-year-old dearly, but ever since Sarah Jane had betrothed herself to a young minister she had become such a pattern card of rectitude that she occasionally verged on being downright annoying.

"Oh, stop being such a prig, Sarah Jane!" Emily was not as fond of Sarah Jane as Susannah was. "I think Susannah is right to want to buy a man! There's too much work for all of us as it is, and with you getting married there will soon be even more!"

"I hadn't thought of that." Mandy sounded taken aback. One result of so much pampering was that the third Redmon sister was just a tad lazy. Mandy worked when there was no help for it, but anytime she could avoid a chore she found unpleasant, she did so.

"But to actually purchase another human being! It goes against everything Pa has ever taught us!" Sarah Jane said. " 'Tis promoting slavery, and you know how Pa feels about that!"

"If Pa dislikes it, then he'll just have to dislike it. It's all very well to spend all one's time ministering to the less fortunate as he does, but someone must do the chores. I grant that Pa showed fine Christian principles in employing the town drunk as a hired man, but it just has not worked out as he had hoped. Though he does not see it, of course." Susannah fought a disrespectful tendency to roll her eyes heavenward. She had long since decided that the unquenchable optimism of their father, the Reverend John Augustus Redmon, minister of the fledgling First Baptist Church on the outskirts of town, was a cross she had to bear. Hard-headed pragmatism about the mundane realities of life such as food and shelter was beyond him. The Lord would provide, the Reverend Redmon always maintained, even when faced with the direst circumstances. Then he would smile his sweet, vague smile and refuse to trouble his head with the difficulty a moment longer. The aggravating thing about it was, he was usually right. The Lord—with a little help from His handmaiden Susannah down below on earth—usually did.

"Can't we go home and discuss this there? We're attracting attention." Sarah Jane cast another embarrassed look over her shoulder at the teeming street.

Following her gaze, Susannah saw that Sarah Jane was right. Passersby, particularly the male ones, were ogling the sisters with interest. Nosy things, Susannah thought with a narrowing of her eyes, not realizing that the four of them, each so very different, made quite a picture as they stood arguing in the street. Closest to the sidewalk was Emily, with her carroty red hair cascading down her back from a simple ribbon at the crown of her head. She was clad in a daffodil yellow frock that flattered the youthful plumpness that she had not yet outgrown. A splattering of freckles covered her nose because, scold as Susannah might, Em could never be bothered to wear a sunbonnet. She was a pretty girl, though quite eclipsed by Mandy, who stood beside her. Mandy was reasonably tall—she and Emily were much of a height—but willowy where Emily was plump. Her apple green dress had been chosen to set off her lissome figure, just as her lace-trimmed sunbonnet had been carefully selected to provide maximum flattery for her porcelain complexion and auburn curls. If she was not quite a world-class beauty—her nose was just a trifle too long and her chin too pointed—she was the closest thing to it that Beaufort possessed, and she was, in this, the year of Our Lord 1769, the belle of the county.

Sarah Jane, who stood opposite Emily, was plainer, with a quiet kind of attractiveness that would stand her in good stead as a minister's wife. Her eyes were large and grave, her soft brown hair was never in disorder, and, though she was shorter than her younger sisters, her figure was trim. She wore a white dress sprigged with pink and a pink sunbonnet on her head. As always, she looked as fresh and good as a loaf of new-baked bread.

Sandwiched between Sarah Jane and Emily, Susannah drew about as much notice as a squat brown titmouse might when flanked by a bright-colored pair of tropical birds. She was small of stature, smaller even than Sarah

Jane, but sturdily built where the other girl's bones were fragile. Her dress was loose-fitting, designed for comfort and modesty rather than to show off a figure that she felt called instead for concealment. Fashioned with chores rather than high style in mind, the garment was made of tan calico chosen for its resistance to showing dirt. A peach-colored sunbonnet was perched on her head more to keep the bright May sunlight out of her eyes than to protect her fair skin, about which she rarely troubled herself. Its too-large brim, coupled with the rather limp bow with which it tied under her chin, had the unfortunate effect of seeming to overpower her small face, making it appear both plain and square. Her hair was a nondescript color midway between blond and brown. By dint of much effort, it was slicked severely back from her face and bundled into a cumbersome knot that stuck out awkwardly behind the sunbonnet. It was coarse as a horse's tail, so thick that she could barely drag a brush through it, and wildly curly to boot. The bane of her life when she was a girl, her hair was just one more thing she had learned to live with. Each morning she attacked it with water and a brush, tamed it into a style that was relatively tidy if nothing else, and forgot about it until it worked free of its pins or in some other way demanded her attention. She had a pair of large, well-shaped, thickly lashed eyes that were unfortunately of no more remarkable a color than hazel, a small pert nose, a wide, full-lipped mouth, and a jawline that was nearly as broad as her cheekbones. No beauty, she, and she knew it. She looked like what she was, a twenty-six-year-old woman who had been left on the shelf and had no interest in or hope of attracting men. Nearly all of the speculative glances directed toward the quartet of ladies passed right over Susannah's head to fasten on her sisters.