Read No Eye Can See Online

No Eye Can See 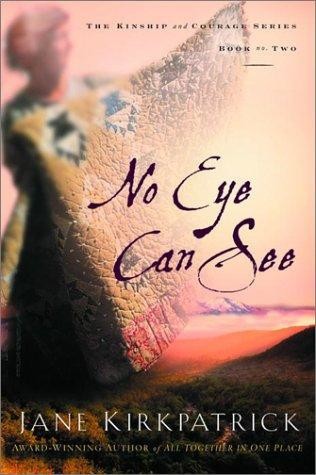 Praise for
No Eye Can See

“No Eye Can See
breathes with authenticity, nourishes with its depiction of women of courage, and inspires with its simplicity. It is truly an experience in faith and hope.”

“Come enjoy Jane Kirkpatrick's
No Eye Can See,
a novel that captures the rich historical path of eleven women pioneers. It's the autumn of 1852, and their journey west is drawing near to its destination of Shasta City, California. A new life awaits, one that will require courage, love, and faith even greater than the journey west. They are building for themselves and their families a place to call home.
No Eye Can See
comes alive under Jane's pen, a tapestry of faith woven together in beautiful words. It is a book that should not be missed by those who want to feel and breathe the journey west to settle a new frontier.”

“No Eye Can See
is a poignant story of compassion, courage, and tender relationships. Rich with hope, it spoke gently to my heart.”

—ALICE GRAY
editor of the Stories for a Woman's Heart series

“Sweeping in scope,
No Eye Can See
deftly draws the reader into another time and place. Through the wonderful cast of characters who people this novel, I came to feel as if I was one of them, a courageous soul building a new life in a strange new land. Kudos, Ms. Kirkpatrick!”

“Jane Kirkpatrick brings Californias Shasta City back to life in this exuberant gold-rush tale of remarkable women making a place for themselves on the frontier. Sensitively written, vividly imagined.”

—JOANN LEVY
author of
For Californias Gold
and
Daughter of Joy,
winner of the Willa Award for Fiction

“As few contemporary novelists can, Jane Kirkpatrick serves admirably as omniscient narrator. Not surprising with her credentials: seasoned historical novelist, inspirational speaker, Oregon rancher, consultant to American Indian communities. The dramatic question she constructs is simple: Can eleven pioneer women, their male counterparts lost to cholera, accident, or perfidy, complete an 1852 wagon train journey and make new lives in raw Pacific Coast communities? They lack money-earning and decision-making skills; ones blind, ones lovesick, two seethe over spousal wrongdoings; others are paralyzed with grief and uprootedness. Of Kirkpatrick's many skills, most magical is her ability to see her characters as souls-in-progress. Their choices are always unpredictable, yet once made, inevitable.”

“Graceful and poignant, Jane Kirkpatricks second book in the Kinship and Courage series imparts hope for the journey. We struggle with the courageous women we met in
All Together in One Phce,
as they confront disappointment, disillusion, and heartbreak, wondering if Shasta really is the promised land. As the women stretch their faith in the certainty of things hoped for, we get a glimpse of what
No Eye Can See.”

OTHER BOOKS BY JANE KIRKPATRICK

KINSHIP AND COURAGE SERIES
All Together in One Place

This book is dedicated to
my husband, Jerry
for always helping me to see.

The widows,
All Together in One Place

Suzanne Cullver, a former photographer
Clayton and Sason, her boys

Ruth Martin, a horsewoman and auntie to Jason, Ned, Sarah, and Jessie

Lura Schmidtke, a businesswoman
Mariah, her daughter
Matthew, her son

No eye has seen, no ear has heard, no mind has conceived what God has prepared for those who love him.

Im not afraid of lightning nor the wolf at my door
Im not afraid of dying alone, anymore.
But when journeys are over and there's fruit on the vine
I'm afraid I'll be missing what we left behind.

What We Left Behind
by MARV ROSS

Home is not only the place you start from, but the place you come back to…where dreams are sustained, hurts healed, where our stories are told.

From
Landscapes of the Soul
by ROBERT M. HAMMA

His arms outstretched, he called to her, his voice deep and far away. “Look up here, then. At me.” Suzanne Cullver found his gaze behind round lenses, the sun glinting off the wire frames. “I'll catch you if you fall,” he said.

She heard, wanted to believe, but she hesitated, watching her husband brace himself against the current as he stood in the middle of the stream. He didn't belong here. Something was wrong, but she couldn't imagine what. He wore butternut-colored pants with a row of silver buttons just below his waist. Water splashed up high on the pant legs he'd rolled up to his knees. Suspenders, two lines of cedar-red tracks, marked his bare chest. He looked boyish, hair falling over one eye, a wide grin of encouragement given just for her. “Put your foot on that rock, there.” He pointed with his chin to a gun-gray stone smeared with moss of green.

“It looks…slick,” Suzanne said above the water's rushing. Bryce's bare toes shimmered jagged beneath the water swirling around his legs. She could see the sinew and muscle of his calves, how he held himself steady against the push of water. He looked so sturdy. Then in an instant, he whooped aloud, arms circling like a windmill. His face took on a flush of worry—but then he laughed, his hearty life-loving laugh, as he straightened, keeping himself balanced.

“It's not so bad out here in the middle,” he said. “Just look up. Keep your focus and you'll be fine. Just like the good photographer you are.”