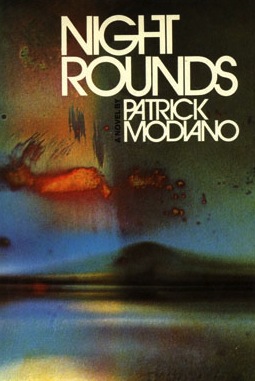 translated from the French by Patricia Wolf

This is a Borzoi Book published by Alfred A. Knopf, Inc.

All rights reserved under International and Pan-American

Published in the United States

by Alfred A. Knopf, Inc., New York, and simultaneously

in Canada by Random House of Canada Limited, Toronto.

LAUGHTER
spilling into the night. The Khedive looked up.

"So you played mah-jongg while you waited for us?" And he sends the ivory pieces scattering over the desk. "Alone?" asks Mr. Philibert.

"Have you been waiting very long for us, son?"

Their voices are muffled to low whispers. Mr. Philibert smiles and gestures vaguely with one hand. The Khedive droops his head over his left shoulder and leaves it there, his cheek almost touching his shoulder. Like a marabou.

In the middle of the living room, a grand piano. Purple walls and draperies. Large vases filled with dahlias and orchids. The light from the chandeliers is dim, as in a bad dream.

"How about some relaxing music?" suggests Mr. Philibert.

"I'd rather have a tango," says Frau Sultana.

The women's make-up is much too heavy. The men
wear acid colors. Lionel de Zieff has on an orange suit and an ocher-striped shirt. Pols de Helder a yellow jacket and light-blue trousers, Count Baruzzi a dusty-green tuxedo. Several couples start to dance. Costachesco with Jean-Farouk de Méthode, Gaétan de Lussatz with Odicharvi, Simone Bouquereau with Irène de Tranzé… Mr. Philibert stands alone, leaning against the window at the left. He shrugs when one of the Chapochnikoff brothers asks him to dance. The Khedive sits at the desk, whistling softly to himself and beating time.

"You know," says Mr. Philibert, "police work is just endless patience." He goes over to the console table and picks up the pale-green leather-bound book lying there:
Anthology of Traitors from Alcibiades to Captain Dreyfus
. Leafing through it, he pulls out whatever he finds between the pages – letters, telegrams, calling cards, pressed Rowers – and puts it on the desk. The Khedive seems intently interested in this investigation.

Just then,
Bei zärtlicher Musik
starts up. A tango, and they are cramped for space to dance. They jostle each other, some even stumble and slip on the parquet floor. "Don't you want to dance?" inquires Baroness Lydia Stahl. "Come on, save me the next rhumba." "Let him alone," mutters the Khedive. "He doesn't feel like dancing." "Just one rhumba, one rhumba," pleads the Baroness. "One rhumba, one rhumba!" shrieks Violette Morris. Under the light from the chandeliers, they are reddening, turning blue in the face, flushing to deep purple. Beads of perspiration trickle down their foreheads, their eyes bulge. Pols de Helder's face grows ashen as if it were burning up. Count Baruzzi's cheeks cave in, the rings under Rachid von Rosenheim's eyes puff out. Lionel de Zieff puts one hand to his heart. Costachesco and Odicharvi seem dazed. The women's make-up is crackling, their hair turning more and more violent colors. They are all decaying and will surely rot right where they are. Do they stink already?

"Let's make it brief and to the point, son," whispers the Khedive. "Have you contacted the man they call 'The Princess de Lamballe'? Who is he? Where can we find him?"

The record has stopped. They are settling on the sofas and hassocks, in the armchairs. Méthode uncorks a bottle of cognac. The Chapochnikoff brothers leave the room and reappear with trays of glasses. Lussatz fills them to the brim. "Let's have a toast, friends," suggests Hayakawa. "To the Khedive's health!" cries Costachesco. "To Inspector Philibert's," says Mickey de Voisins. "A toast to Madame de Pompadour," shrills Baroness Lydia Stahl. Their glasses chink. They drain them in one gulp.

"You know we have the whip hand," whispers Mr. Philibert.

The others are conferring in low voices. The light from the chandeliers is fading, wavering between blue and deep purple. Faces are blurred. "The Hotel Blitz is getting more troublesome every day." "Don't worry, as long as I 'm around you'll have the full backing of the embassy." "One word from Count Grafkreuz, my friend, and the Blitz's eyes are closed for good." "I'll ask Otto to help." "I'm very close to Dr. Best. Want me to speak to him?" "A call to Delfanne will settle everything." "We've got to be rough with our agents, otherwise they walk all over us." "No quarter!" "And we're covering them to boot!" "They ought to be grateful." "We're the ones who'll have to do the explaining, not they!" "They'll make out fine, you can bet! As for us…!" "They haven't heard the last from us." "The news from the front is excellent.
EXCELLENT
!"

"I can understand your hesitation," says the Khedive. "This is what I have in mind: to start with, you tell us where we can find and arrest every member of the ring tonight."

"Just to get up steam," Mr. Philibert adds. "Then you'll find it easier to cough up Lamballe's address."

"The haul is set for tonight," whispers the Khedive. "We're waiting, son."

A yellow notebook purchased on the Rue Réaumur. You're a student? the saleswoman asked. (Everyone is interested in young people. The future is theirs; everyone wants to know their plans, inundates them with questions.) You need a flashlight to find the page. Can't see a thing in this dim light. You leaf through the notebook with your nose almost skimming the pages. The .first address is in capital letters: the Lieutenant's, the ringleader's. You try to forget his deep blue eyes, the friendly way he says: "Everything O.K., kid?" You wish the Lieutenant were rotten to the core, a cheap, shoddy fraud. It would make things easier. But he hasn't a single flaw. As a last resort you think of the Lieutenant's ears. Just the reminder of this piece of cartilage is enough to make you want to vomit. How can human beings possess such monstrous excrescences? You picture the Lieutenant's ear, there, on the desk, larger than life, scarlet and laced with veins. And you quickly tell them where he will be that night: Place du Châtelet. The rest is easy. You give a dozen names and addresses without even opening the notebook, like an earnest schoolboy reciting a fable of La Fontaine.

"Sounds like a good haul," comments the Khedive. He lights a cigarette, the tip of his nose tilted toward the ceiling, and blows smoke rings. Mr. Philibert has sat down at the desk and is leafing through the notebook. Probably checking the addresses.

The others go on talking among themselves. "Let's dance some more. My legs are asleep." "Soft music, that's what we need, soft music." "Name your choice, all of you! a rhumba!"
"Serenata ritmica." "So stell ich mir die Liebe vor." "Coco Seco." "Whatever Lola wants." "Guapo Fantoma." "No me defies de querer."
"Why don't we play hide-and-seek?" Applause. "Great! Hide-and-seek!" They burst out laughing in the dark. Making it tremble.

The Witch of Blackbird Pond by Elizabeth George Speare
Jason Deas - Benny James 02 - Pushed by Jason Deas
Falling for the Enemy by Samanthe Beck
A Lover of Men by Julia Talbot
The Gift by Kim Dare
Silent Treatment by Michael Palmer
The Fury by Sloan McBride
Into the Woods by Kim Harrison
Aubrielle's Call by Bowen, C. Marie
Death of a Coupon Clipper by Hollis, Lee