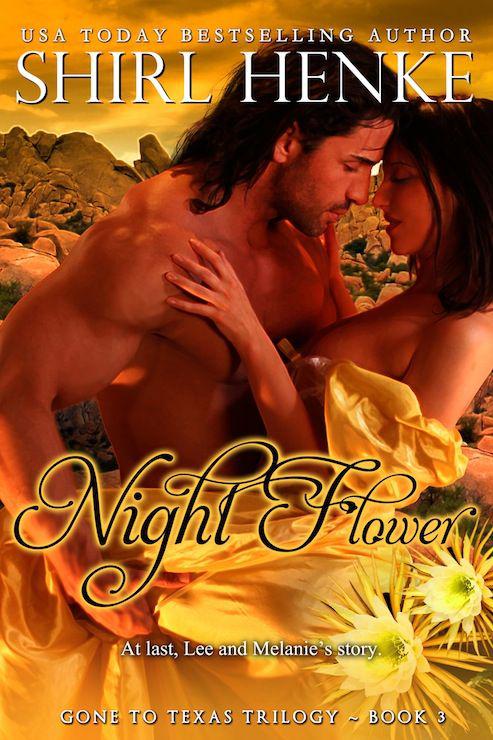 All rights reserved. No part of this ebook may be reproduced in any form or by any electronic means without the written permission of the publisher.

Other electronic works by Shirl Henke:

A FIRE IN THE BLOOD

“Billie Jo and the Valentine Crow”

LOVE A REBEL…LOVE A ROGUE

Smoke burned his eyes though he squeezed them tightly shut, trying in vain to staunch the acid tears. He could hear the shrieks of the Comanche raiders as they rode furiously around the smoldering ruins.

Six-year-old Leandro Velasquez laid huddled beneath a musty hemp sack in a corner of the root cellar. When the Comanches had come, his mother had raced into the ranch house and scooped him up as he watched the savages approach from the front window. They were fierce-looking warriors with fearful bison-horn helmets on their heads and black paint smeared across their faces. Their small wiry horses were adorned with feathers and encumbered only by small rawhide “saddles.”

As one warrior whooped and shot, he slung himself over the side of his horse, holding on to the rawhide band around its belly with one leg. Using the horse as his shield, he rained arrows from beneath its neck. The vaqueros returned the fire until the last of the defenders had been cut down. No one had been expecting an attack, especially by such a large, well-armed band.

Dolores Velasquez had instructed her son to stay very still and remain hidden no matter what happened. Then, she vanished up the steep steps in search of Tomás and Josefina, his older brother and sister.

Lee was frightened. Where was his father? He wanted to follow his mother's instructions, but the smoke was choking him in the dark cellar. Then, he heard Josefina’s sharp, piercing shriek, followed by a series of whimpering cries.

Desperate beyond fear, he climbed the rickety stairs, coughing and sobbing, stumbling as he raised the trapdoor to the root cellar.

All around him, thick smoke enveloped the room. Because it had rained for days and the roof was soaked, the fire smoldered instead of flaming. He crawled across the floor until his hands touched a body—his fifteen-year-old brother, Tomás, who lay with his head at a grotesquely twisted angle. The dead youth had been shot and scalped. Mercifully, the smoke obscured the body's hideous condition from the crying child.

Unable to rouse Tomás, Lee crawled toward a window, drawn by the piteous moans of Josefina. As the Comanche horses pounded into the distance, he rubbed at his burning eyes with two grimy little fists and tried to see. The painted warriors now were vanishing over the hill, leaving carnage in their wake.

The boy stumbled from the house in a daze, ignoring the fallen bodies of two of his father's vaqueros. He ran to Josefina; but when he crumpled by her side, she was dead. Her gleaming raven hair had been cruelly sheared off to adorn some warrior's scalp pole.

Turning from the unbearable sight, he was assaulted by one even more fearsome. His mother was sprawled protectively across the body of his father, clutching it tightly in death. His father's throat had been pierced by an arrow and both his parents had been scalped and mutilated. Lee threw himself on their contorted bodies, screaming until his raw throat could emit no more sound. He lay still, faint with exhaustion and terror.

That was how Will Slade and the militia found him the following morning.

The attic was dusty and filled, with cobwebs, but that made the child feel even more certain the trunks and boxes piled beneath the accumulated grime must contain hidden treasures. Impatiently brushing a sticky web from her hair, she knelt before an ornate leather chest. It looked very old. It must have been the prized possession of a great lady, she was sure.

She struggled with the straps that bound it, then threw back the lid. With a small gasp of delight, she lifted the buckskin garment that lay inside. It was primitive and beautiful, elaborately fringed and worked with thousands of brightly colored beads. As she held it up for inspection, a leather-bound book tumbled free of the dress folds and slid to the dusty floorboards at her feet.

When she draped the dress across the chest and reached to open the book, its yellowed pages crackled in protest. The handwriting was neat, but cribbed and small. She took it over to a dormer window behind a pile of boxes. Bright morning sunlight illuminated the pages of the diary. The first entry was dated 1750.

The light was growing dim when she heard her grandmother’s voice calling out in musical French. “Where are you, child?” Melanie could hear the woman's footfalls in the hallway as she searched from room to room on the second floor of their brownstone. With her heart pounding, half afraid she had done something that was forbidden, Melanie sat very still.

“Melanie, are you up in that filthy attic? However did you get the door open?” The steps creaked as Marie Duval ascended into the attic.

“I—I'm here, Grandmother,” Melanie replied from where she, stood at the window, silhouetted in the fading light.

Marie sighed with relief. “I told Hattie to keep watch over you while I was out, but she said you refused lunch and I thought—” Her voice froze as she spied the opened chest with its buckskin treasure spilling over the edge. Then, she looked back at the pretty eight-year-old and the diary clutched in her hands. “What have you been doing, Melanie?”

“Reading about your grandmother and grandfather and how they met,” Melanie said. “Are you angry with me?”

Smiling, Marie Duval held out her arms, and Melanie slipped around the piles of crates and boxes to run into her embrace.

“So now you know one piece in the patchwork quilt that is our life.” Marie sighed as she stroked the child's lustrous black hair. “I had hoped to save this conversation for a few years, until you were older; but now you have taken that decision from my hands. Come, let's have Hattie brew some tea and I'll tell you all about Sweet Rain and Simon Duval.”

Melanie sat perched on the edge of her chair in the parlor, sipping tea and listening as her grandmother told her the story of how Marie's grandfather, a French fur trapper, had met and married the daughter of a Cherokee tribal leader in Georgia. “Is our Cherokee blood the reason we can't live with Papa in New Orleans?” Melanie asked.

Marie shook her head. “No, my little one. Your papa's family does not even know of our Indian blood.” She added sadly, “Men of your father's class do not ever marry women from our backgrounds.” Marie hesitated, uncertain of how to explain. “You understand Hattie is full-blooded African, do you not?”

“Yes, Grandmother, but Hattie is a servant, a slave. What has that to do with Papa, or with us?”

“We too have African blood in our veins, my little one. Oh, a very much smaller amount, to be certain. That is why our skin is so much lighter. My great-grandmother was African.”

“No, of course not, little one. We are Free People of Color,” Marie said proudly. “My Grandmother Sophie was a black slave who earned her manumission papers. Now, we live in a lovely home and have servants of our own.”

“Then it is our African blood that keeps us from living with Papa in New Orleans,” Melanie said softly.

Watching the child digest this cruel fact of life, Marie Duval felt her heart might break; but the girl's next words truly shocked her.

“Now I understand about the silver-haired lady at Mother’s house. Mother argued with her until Papa came in and carried the lady away. Papa was very angry. If he couldn't marry Mother because of her African blood, he must have chosen the white lady to be his wife. She doesn't want us there,” Melanie said forlornly.

Marie Duval herself had been a
placèe
, as had her mother. Now Lily, Marie's daughter, was the mistress of a rich Creole gentleman, Melanie's father, Rafael Flamenco. Melanie would be fortunate when her time came to find a lover as generous.

Marie took the fourth-generation Duval daughter in her arms and let her cry.

The tall, slim man stood silhouetted against the library's leaded-glass windowpanes. Deep in concentration as he read a letter, he was as oblivious to the beautiful fuchsias and lavenders of the sunset as he was to the warm comfort of the masculine room. On all four walls, books that had been precisely catalogued by his Uncle Alfonso were shelved floor to ceiling. A dark leather sofa faced the large fireplace on the north wall and several soft, upholstered chairs invited a reader to enjoy his book in their comfort. Massive stained-oak tables were littered with manuscripts and writing utensils.

Leandro Angel Velasquez had spent over three years of his life in this genteel atmosphere of scholarship and refinement since his father's elder brother had invited him to attend the university in Mexico City.
If Uncle Alfonso's wife and son hadn't died, I'd never have left San Antonio,
he mused to himself.

Now, he was being beckoned back to Texas. His mind conjured up the wide rolling hills and burbling springs around his birthplace. The austere windswept plains of south central Texas were so different from cosmopolitan Mexico City on its high, temperate yet tropical plateau.

I would never have met Dulcia, either.
Lee could still picture the exact moment he had first laid eyes on her. She had come home from school for the Christmas season, an ethereal girl with an inner beauty that illuminated her fragile prettiness. Her chestnut hair had gleamed lustrously dark, spilling down her back in a cascade of thick honey-brown waves. She was just fifteen, still a schoolgirl not allowed to pile her hair high in elaborate coiffures set with combs. Clear blue eyes and a small bowed mouth smiled up at him as she had shyly watched him approach.

“You must be Dulcia.” He had given her his most engaging smile. “A sweet name for a lovely miss.”

She had replied, “And you must be Uncle Alejandro's son from Texas. Uncle Alfonso speaks highly of you.” Her soft eyes never dared to rise to his.

As he bowed, he noted with approval that her innocent shyness was genuine. She had been as guileless and refreshing as spring rain.

“I—I should not be alone with you. My chaperone is in chapel and I came out only for some fresh air,” she had said hesitantly, embarrassed to even mention the proprieties.

Lee had smiled again, gravely this time. “Never fear. We are both Uncle Alfonso's wards, and so related. I'm sure it's proper.”

Dulcia had shaken her head, “You are his nephew, while I am but the daughter of a distant cousin. I fear our relationship is not all that close.” A second after she had said the words, she flushed at their unintentional implication.

Lee had not been able to resist reaching gently for her hand and bestowing a brief, chaste kiss on the back of it. “Then may I be so bold as to hope we may become closer—friends, perhaps?” He had left the rest unspoken; but, nonetheless, she had fled inside the house.

Lee had watched her grow from a budding adolescent into a serene and lovely young woman of seventeen. When she was at last home from the sisters, her course of study complete, his own tenure at the university was drawing near to its conclusion. He was afire with dreams and ambitions, eager to begin fulfilling his role in life. Lee wanted the love of his youth beside him.