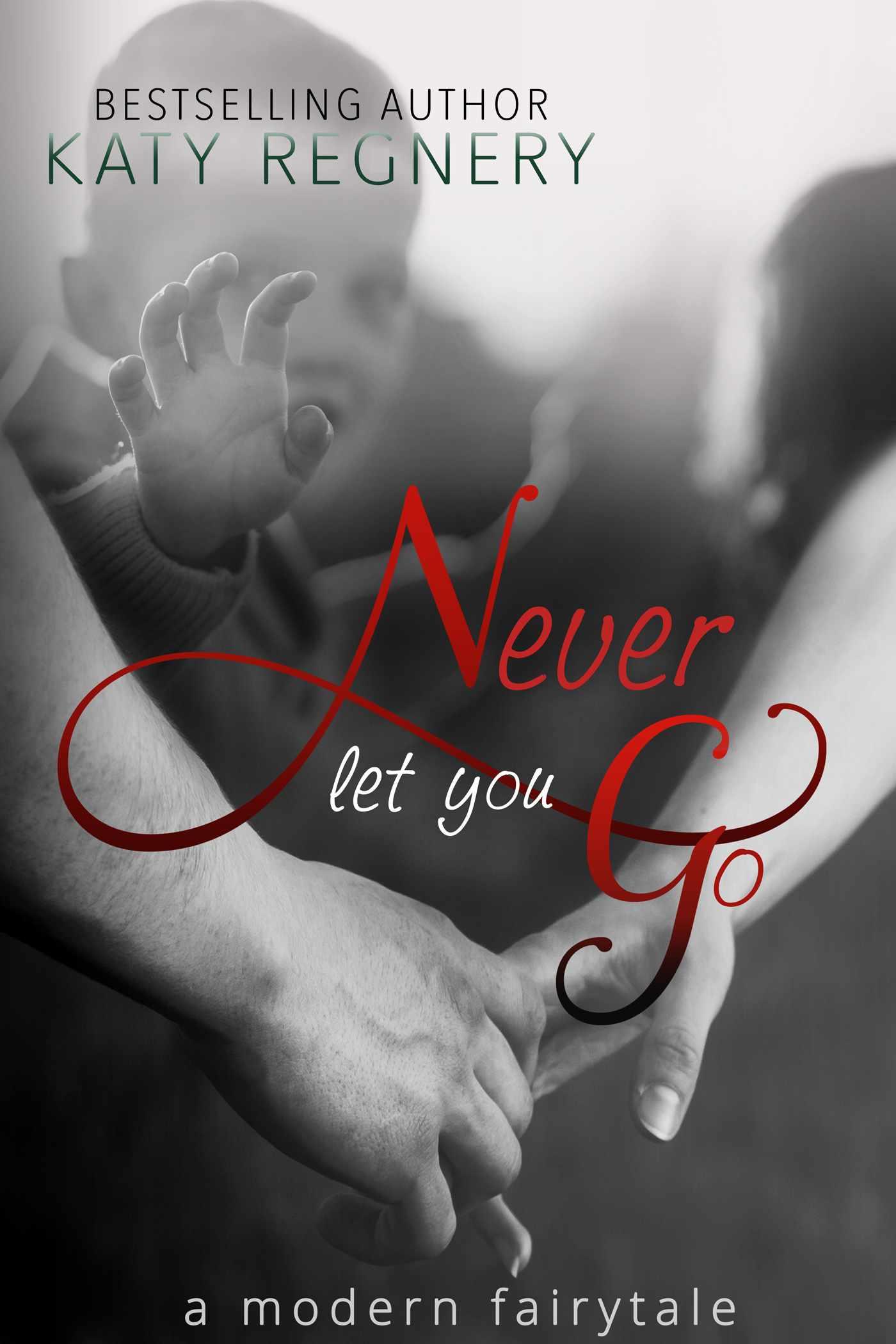 In this modern retelling of
Hansel and Gretel
, thirteen-year-old foster children Griselda and Holden escape from their abductor after three years of brutal captivity, and try to cross the Shenandoah River on foot. Tragically, one of them makes it to safety, but the other is left behind.

Ten years later, Griselda’s boyfriend drags her to a fight club grudge match, and her world is turned upside down when she watches Holden step into the ring.

Though the connection between them is fierce, bitter regret, simmering rage, and a tangle of physical and emotional scars lie between them, just as dangerous as the white water of the Shenandoah.

Never Let You Go
is a story of fear and hope, defeat and survival, and two people—once profoundly broken—who discover that love is the
only
thing that can make them whole again.

Sale of the electronic edition of this book is wholly unauthorized. Except for use in review, the reproduction or utilization of this work in whole or in part, by any means, is forbidden without written permission from the author/publisher.

This book is a work of fiction. Names, characters, places, and incidents are products of the author’s imagination or are used fictitiously. Any resemblance to actual events, locales, or persons, living or dead, is entirely coincidental.

My grief started this journey.

We miss your gentle spirit.

A letter to my readers

“Get up, Holden!” she hissed at him, one dirty hand waving wildly in his face. His eyes were level with her bare feet, which were filthy and scratched, bright red blood oozing through a layer of dust and mud splatter.

Holden could hear them coming, getting closer and closer with every labored breath he took, but his legs burned and his feet were torn to pieces.

Griselda reached down, grabbing a handful of his hair and jerking his head up. “I mean it. Now!”

He pushed himself up out of the muddy puddle that had tripped him, and reached for her hand.

“Run!” she demanded, setting off at a clip, pulling him down the rugged dirt road, the tail of one amber braid whipping into his forehead as they made their way closer to the safety of the high corn. “I know you hurt, Holden. I hurt too, but don’t stop!”

Tears rolled down his cheeks as his shorter legs worked twice as hard to keep up with her.

“G-G-Gris,” he sobbed, staring at the dirty, ripped, yellow and white gingham dress that covered her back. “M-m-my ankle’s twisted.”

“Don’t think about it. Keep running,” she said, without looking back, her grip on his hand unmerciful. “We’re almost there.”

From behind them, Holden heard
the Man’s voice. “Dang cornfields! Don’t let them make it through the rows, or we’ll lose them, Cutter!”

The words were loud and slurred, and the baying of the meanest hound on earth answered his master’s command.

“You hear that?” Gris gasped between pants. “Faster, Holden!”

Amazingly, she sped up, dragging him along behind her, running as fast as her thirteen year old legs could carry her. Holden’s feet barely set down long enough between steps to register the sharp prickles of the spurge weed as they sped barefoot across the field.

He heard her whispering it under her breath like a mantra, and though Holden couldn’t feel his legs anymore, he wouldn’t let her down. Somehow his feet kept moving, despite the pain.

Fight through it
, he thought.
Fight, damn it!

With a yank and a whoosh, she steered them into the nearest row of corn, the hot green stalks batting them in the face as the dead brown leaves below sliced into their bare legs and feet like blades.

Holden whimpered from the sharp cuts but kept the sound as quiet as possible, lest she hear him. His fingers were numb from Gris’s iron grip on them, and his wrist ached from the way she jerked his hand as she pulled him along. He looked down at his feet and saw a blur of brown below. He had no idea if they’d make it, but he knew one thing for sure: he wouldn’t have had a chance without her.

“Almost there,” she said, risking a quick look behind her, and even managing a small, encouraging smile at her friend.

Holden wanted to offer one to her in return, but his lip had been split last night and it hurt too much to smile.

The Man’s
voice was getting closer, and they were only halfway through the cornfield. Cutter barked his pleasure, and the sound vibrated through Holden’s thin body like a beating.

“Not today, Cutter,” growled Gris, darting to her right and crossing two rows before heading left toward the river again.

He finally heard the rush of water, and when he looked up, just beyond Gris, he saw it—

the banks of the Shenandoah.

“Remember, Holden. Don’t look back, no matter what. Our feet are smaller than his. Stone to stone. I jump, you jump. We get halfway across, he won’t follow.”

We get halfway across, we still might die
, thought Holden, looking at the way the water rushed white over the rocks in the middle, painfully aware that he didn’t know how to swim.

“I hear you thinking, Holden Croft,” she said, her words choppy and short since she was so out of breath, “but it hasn’t rained in nine days. That’s why today. That’s why
now
.”

They finally rushed through the end of the row, their feet alighting on the softer grass that ran along the banks of the river. Not having eaten since yesterday morning, Holden was light-headed and dizzy, and he didn’t know how he’d keep his balance if they couldn’t stop to rest for a second. As they reached the water’s edge, Gris, who must have been as dizzy as he, dropped his hand and leaned over, placing her hands on her bony knees to catch her breath.

Cutter’s baleful howl drew closer, and Holden looked up to see the stalks shaking about twenty yards back, the Man’s
rifle tip poking up over the golden tassels. When Holden turned his head, Gris’s sky-blue eyes captured his.

Holden looked at wide stretch of river. Gris was right that the water didn’t look as deep as the other time they’d seen it, almost three years ago, but it didn’t look safe either. Rocks jutted up from the bottom, sharp and ragged, and water whooshed white over some of the stones in the middle.

Gris took his hands, her keen eyes darting back and forth between his. “Stone to stone. I jump, you jump.”

Holden whipped his neck to see Cutter bound out of the corn, emitting a proud wail when he caught sight of the two children huddled together by the shore’s edge.

Pulling Holden’s hand, she stepped forward with a splash and Holden followed, the cold water both shocking and soothing on his shredded feet. She dropped his hand so she’d be able to maintain her balance, and started hopping from rock to rock. Holden stared at her feet, just as he had all the times they’d practiced in the damp, dark cellar. As she leaped, the water cleaned her feet, until they were shiny and white, with deep scratches and gouges. Hop, steady. Leap, stop.

If she looked behind to confirm he was following, he didn’t know it, his eyes were so fixated on her feet. His heart thundered in his chest, knowing that at any moment Cutter could leap into the water, or the Man
could grab the back of Holden’s threadbare gray T-shirt and yank him back to shore, away from Gris.

From behind, Holden heard a loud splash, like how it would sound if a pair of men’s boots hit the water at the same time, but Cutter didn’t sound as close. His barks went back and forth across the riverbank, where he must have been pacing and howling, reluctant to follow his master into the cold, rushing water.

“Ruth!” the Man called to Griselda. “Ya stop right now, gal, or I’m a’set to lash s’many stripes in yer back, it’ll take the devil hisself to stop me.”

The Man’s breath wasn’t so far away now. Not close enough to smell, but like a dragon’s from the fairy stories Gris told, it was burning and hateful and roaring and low, filling Holden’s ears with dread. He fought the temptation to turn around, to look at the monster behind him, but he heard Gris’s voice in his head:
Don’t look back, no matter what. Our feet are small. Stone to stone. I jump, you jump.

He hazarded a glance up, and Gris was getting to the middle now, but consumed with her progress, she wasn’t looking back anymore. The distance between them was widening little by little as Holden struggled to keep up with her.

“And you, ya godforsaken half-wit, I’ll club yer head in and finish the job the devil started, Seth.”

Holden clenched his fists at his side as he heard a loud splash followed by some angry cussing.

Hop, steady. Leap, stop. Hop, steady. The water rushed around the rocks now, making them more slippery than they’d been closer to the shore, and Holden’s breath caught as he almost slid off a mossy one, compensating by tilting his body back, then forward, to find his balance.

“You still with me, Holden?” Gris yelled.

The butt of the Man’s
rifle rammed against Holden’s ear with a sharp, shocking thwack that made the side of his face explode in pain and sent him sailing off the rock and into the river. Disoriented, with stars bursting behind his eyes, he heard Griselda scream “Holden!” over the sound of the water sluicing between them.

The Man stood waist-deep in the rushing water, holding the neck of Holden’s shirt bunched up in his hand. With one yank, he dragged him up out of the water and onto a nearby rock like a rag doll.

Holden coughed and gurgled, crouched on the rock in defeat, the front of his shirt almost strangling him from the Man’s hold on it. It took strength he didn’t have to raise his head and find Gris’s stricken face about ten feet ahead. She hopped back one rock closer, her eyes desperate as she looked from Holden to the Man, back and forth, her face crumbling in agony as she understood her choice.

Holden could hear Cutter’s victory wail from the shore as the Man’s hand twisted and tightened on Holden’s shirt, almost cutting off his oxygen supply.

“You leave him be! Let him go!” she demanded in a shaking, furious voice, small hands fisted by her sides. She flicked her devastated blue eyes to Holden before looking back up at the Man.

Holden shook his head back and forth, faster and faster, his throat chafing against the tightness of the fabric around his neck, as his eyes locked on hers. He felt the hot, wet, humiliating tears trail down his cheeks, but he kept his jaw firm and square, his lips tight, his eyes burning with thanks and regret and love.

“G-G-Gris,” he sputtered. Then, mustering the last bit of strength in his small body, pushing through a haze of tears and terror and exhaustion, he bellowed, “R-r-r-r-uuuuuun!”

And then there was only darkness.