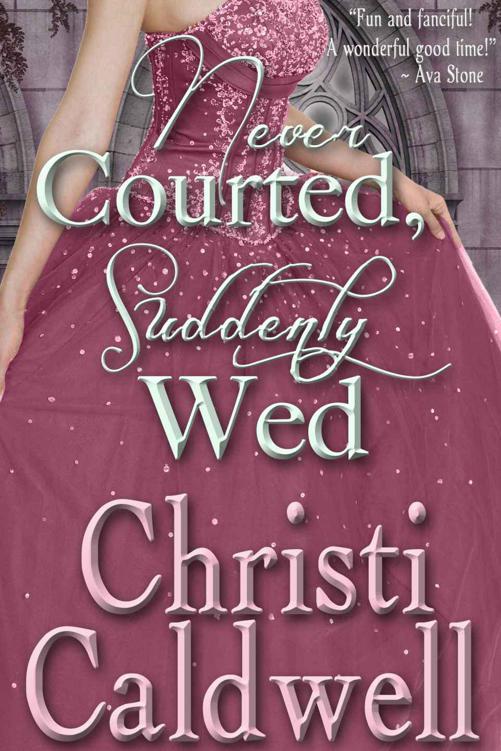 All rights reserved. No part of this book may be reproduced in any form by any electronic or mechanical means—except in the case of brief quotations embodied in critical articles or reviews—without written permission.

The characters and events portrayed in this book are fictitious. Any similarity to real persons, living or dead, is purely coincidental and not intended by the author.

This eBook is licensed for your personal enjoyment only. This eBook may not be re-sold or given away to other people. If you would like to share this book with another person, please purchase an additional copy for each recipient. If you’re reading this book and did not purchase it or borrow it, or it was not purchased for your use only, then please return it and purchase your own copy. Thank you for respecting the hard work of the author.

For more information about the author:

Other Works by Christi Caldwell

To Reagan Hope, Riley Faith, and Rory Celestino. Always remember— it is the imperfect that makes us truly perfect.

To Mom and Dad. I can’t even begin to imagine how much of your retirement funds went into supporting my reading habits over the years. Thank you.

And to my husband, Doug. Only a true hero could care for me as you did for nine long months of bedrest. I love you.

Tremendous thanks to Nancy Goodman and Ella Quinn; critique partners, friends, and staunch supporters who gave up countless hours critiquing and discussing my work. How did I ever get so lucky as to find the both of you?

Miss S.W. and Lady E.F. were observed leaving the Marquess of D’s theatre box. It was noted by many that both young ladies were unchaperoned
.

Christopher Quenby Ansley, Earl of Waxham stared out the long, double windows of his father’s office, at the steady passing of carriages in the London streets below. His fingernails bit into the hard, window sill.

“You goddamn simpleton. I’ve tired of your games! Do you believe for one moment you are clever enough or powerful enough to thwart my wishes?”

Ah, so it was to be goddamn simpleton.
Now there was one of Father’s favorite labels
. From the glass pane, Christopher detected the way in which the Marquess of Milford’s face contorted with barely suppressed rage. The familiar vein pulsed at the corner of his sire’s right eye.

Knowing it would infuriate his father, Christopher feigned a yawn and wandered over to the collection of decanters atop the brass inlaid rosewood table closest to the door. For an infinitesimal moment, Christopher considered making his escape. Instead, he picked up one of the crystal bottles. “I don’t know what games you refer to,” he lied. He poured himself a brandy and took a sip.

The marquess slammed his fist down upon the mahogany desk. Reverberations shook the crystal ink wells upon the surface. “You know very well what I’m talking about. You may have fooled the rest of Society with your charm and wit, but I know the truth.”

Christopher inclined his head. “So I’m charming and witty? I’m honored, my lord.” He held his glass up in mock salute.

His father continued as though he hadn’t spoken. “I made Redbrooke a promise before he died. He’d forgive my debt and you’d wed Sophie if the chit hadn’t wed in her first two Seasons. Well, the gel is on her third and his son is proven far less accommodating than the late viscount. Redbrooke paid me a call to discuss the debt. Fortunate for us, the old viscount settled a fortune on the girl.”

That gave Christopher pause. He took another sip.

Christopher choked on a mouthful of brandy.

His father gave a curt nod. “I see I have your attention.”

Christopher downed the remaining contents of his glass and set it down. “One hundred thousand pounds?”

“You heard me, correctly.”

Christ. So Sophie Winters, the hoyden who’d made his earlier years a bloody misery was worth a fortune. He thought of the seat she’d occupied amongst the other wallflowers Season after Season. How very different things would be for the young lady if other gentlemen learned the truth.

His mouth tightened. Ten years. For ten long, wonderful years he’d not uttered more than passing greetings to the hellion who’d mocked him in his father’s stable. Memories he’d fought to keep long buried, resurfaced—her tinkling laugh as she’d scampered out of the stables. Christopher’s volatile reaction after she’d fled. The fire that had ravaged Christopher’s sanctuary. His gut clenched. Father had never forgiven him.

And Christopher had never forgiven himself.

Father folded his arms across his chest. “The old viscount had some kind of foolish idea about letting the girl make her own match.” He chuckled. “He imagined she’d bring some chap up to scratch on her own and didn’t want the incentive of money to motivate anyone. Fortunate for us, no one knows the truth.”

No one, except the Marquess of Milford.

It would seem the late Viscount Redbrooke had been a deplorable judge of character.

The marquess arched a brow. “You’re wrong on that score. I’d have you wed the girl to save us from financial ruin.”

“What the hell are you talking about?” He knew his father owed the late viscount a debt from a failed business venture, but just how extensive had that investment been? “How much do you owe Redbrooke?”

His father’s skin turned a ruddy shade of red. He tugged at his cravat. “It isn’t just Redbrooke.”

Christopher rocked back on his heels. Father had made some regrettable business decisions over the years but this, this was incomprehensible.

Father slashed the air with his hand. “The bloody French wars destroyed my investments. I sold off the textiles at a loss.”

Christopher swiped a hand across his eyes. His father had so little faith in him that he’d not even sought Christopher’s advice. For his academic failings, Christopher had excelled in all things mathematical. Why hadn’t the old bastard let him look at the bloody ledgers? “What you’re proposing is madness.” Christopher made an effort to avoid the hellion who roused memories of that fiery night…and now his father expected him to
wed
her?

The marquess jabbed a finger in his direction. “You idiot. You have an obligation to me.”

“I have an obligation to no one.”

His father’s white eyebrows dipped. “If you don’t marry her,
we’ll
be ruined. You won’t be so mighty when you’ve lost everything.”

“The creditors have begun calling.” The black scowl on Father’s face was dark enough to raise bloody terror in the devil himself. Fortunate for Christopher, he’d grown accustomed to the hell of living in his father’s household long, long ago.

Christopher’s rash actions might have resulted in the destruction of his father’s stables but he hardly deserved to spend his entire life atoning for that great sin by marrying Sophie Winters. “I’m sorry, Father. I won’t wed her.” Christopher went and poured himself another brandy. He could only imagine the kind of woman she’d grown into. Christopher took a long swallow. Nor did he care to find out.

“You won’t be so casual when you are penniless, shut away from all good company. Christ, I’d had such great expectations for you.” The marquess’ hand slashed the air. “Who would have imagined you’d have turned into such a miserable failure as a son?”

Christopher clenched his jaw to keep from pointing out that it was the marquess’ poor investments and proclivity to the gaming tables that had put them in the spot. His mind wandered off during the all too familiar, tirade. How often had it gone this way with the marquess? Ever since Christopher was a young boy, struggling in his studies, his father had looked on him with contempt and shame.

The marquess presented one façade to Society and an altogether different one to the son who’d never managed to live up to his grand hopes. Over the years, Christopher had devoted himself to winning his father’s approval.

Now, at thirty years of age, he owned some of the finest horseflesh. His company was desired by the most influential members of the
ton
. Young ladies clamored for his notice.

All of that was irrelevant when coupled with his shortcomings.

As if sensing the dark direction his thoughts had taken, his father placed his palms on the surface of the desk and leaned over. Rage dripped from his ice blue eyes. “I know what you are thinking, boy. You’re saying to yourself ‘I’m the darling of Society,’ but my, how all that would change if you were found to be the penniless simpleton you truly are.”

A chill swept over Christopher. The promise of being cut off without funds didn’t terrify him as much as the risk of discovery. His father’s threat to expose Christopher’s struggles was a familiar one. Only this time, a thread of desperation underlined the marquess’ words, lending far too much credibility to his promise.

“You wouldn’t,” Christopher forced out past dry lips. “You’d shame yourself with any mention of the truth.”

“Bah, does it matter? If I am to lose everything, then by God I’ll see you suffer as well.” The marquess took a deep breath and composed himself. His age-weathered hands smoothed a path over the arms of the desk chair. “I know what you were about when you courted the Duke of Mallen’s sister.”

Oh, did he?
Christopher arched a brow. “Please, enlighten me with your reasoning,” he drawled.

The marquess nodded. “You figured if you secured a match with the Duke of Mallen’s sister that as one of the most powerful peers in the realm, Mallen would protect you from Society’s scorn.” He continued with his flawed logic. “Except Lady Emmaline was far smarter than most gave her credit for. She saw your failings.”
Just as I did.
The words didn’t need to be spoken. They burned. Chafed. Dug at Christopher’s gut.

He’d not admit to his father that there had been more to his courtship of Lady Emmaline. He held a deep abiding respect for the Duke of Mallen’s sister. That, in no small way, motivated his courtship.

In the end, she’d chosen the better man in marrying Lord Drake, the Peninsula war hero and heir to a dukedom.

God how he hated him for that.

Christopher peered down his nose at his father. “I’ll say it a final time. I won’t wed the lady, not to appease you.”

His father arched a single, ice-white brow. “This isn’t about appeasing me, Christopher. This is about survival.”

“You’d consign me to the role of fortune hunter? I’m certain that Miss Winters’ father had grander hopes for his daughter than marriage to a penniless earl.”

“The young lady is desperate. She’s better off with a fortune hunter than no one.”

Christopher balled his hands into tight fists at his side. Rage thrummed through him, volatile and burning. “I won’t.” He turned on his heel. He reached the front of the room when the marquess called out, halting him in his tracks.

“Yes you will, Christopher. If you don’t at least court the girl, I’ve no other choice but to cut off your allowance.”