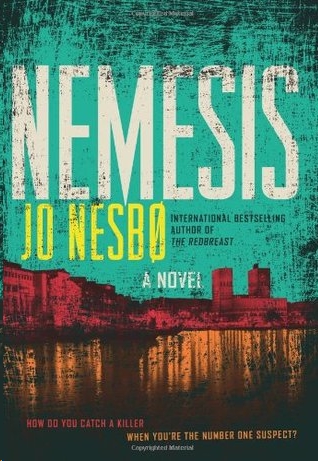 TRANSLATED
FROM THE NORWEGIAN
BY
Don Bartlett

3 The House of Pain

19 The Shoes on the Wire

This eBook is copyright material and must not be copied, reproduced, transferred, distributed, leased, licensed or publicly performed or used in any way except as specifically permitted in writing by the publishers, as allowed under the terms and conditions under which it was purchased or as strictly permitted by applicable copyright law. Any unauthorised distribution or use of this text may be a direct infringement of the author’s and publisher’s rights and those responsible may be liable in law accordingly.

Jo Nesbø has asserted his right under the Copyright, Designs and Patents Act 1988 to be identified as the author of this work

This book is sold subject to the condition that it shall not, by way of trade or otherwise, be lent, resold, hired out, or otherwise circulated without the publisher’s prior consent in any form of binding or cover other than that in which it is published and without a similar condition including this condition being imposed on the subsequent purchaser

First published with the title Sorgenfri in 2002 by Aschehoug & Co. (W. Nygaard), Oslo

First published in Great Britain in 2008 by
HARVILL SECKER

Addresses for companies within The Random House Group Limited can be found at:
www.randomhouse.co.uk/offices.htm

This book was published with the financial assistance of NORLA

The Random House Group Limited supports The Forest Stewardship Council (FSC), the leading international forest certification organisation. All our titles that are printed on Greenpeace approved FSC certified paper carry the FSC logo. Our paper procurement policy can be found at
www.rbooks.co.uk/environment

ALSO BY JO NESBØ
The Redbreast
The Devil’s Star

Part I
1
The Plan

I’
M GOING TO DIE
. A
ND IT MAKES NO SENSE
. T
HAT WASN’T THE
plan, not
my
plan, anyway. I may have been heading this way all the time without realising. It wasn’t my plan. My plan was better. My plan made sense.

I’m staring down the muzzle of a gun and I know that’s where it will come from. The messenger of death. The ferryman. Time for a last laugh. If you can see light at the end of the tunnel, it may be a spit of flame. Time for a last tear. We could have turned this life into something good, you and I. If we had followed the plan. One last thought. Everyone asks what the meaning of life is, but no one asks about the meaning of death.

T
HE OLD MAN REMINDED
H
ARRY OF AN ASTRONAUT
. T
HE
comical short steps, the stiff movements, the dead, black eyes and the shoes shuffling along the parquet floor. As if he were frightened to lose contact with the ground and float away into space.

Harry looked at the clock on the white wall above the exit. 15.16. Outside the window, in Bogstadveien, the Friday crowds hurry past. The low October sun is reflected in the wing mirror of a car driving away in the rush hour.

Harry concentrated on the old man. Hat plus elegant grey overcoat in dire need of a clean. Beneath it: tweed jacket, tie and worn grey trousers with a needle-sharp crease. Polished shoes, down at the heel. One of those pensioners of whom Majorstuen seems to be full. This wasn’t conjecture. Harry knew that August Schulz was eighty-one years old and an ex-clothes retailer who had lived all his life in Majorstuen, apart from a period he spent in Auschwitz during the War. And the stiff knees were the result of a fall from a Ringveien footbridge which he used on his daily visits to his daughter. The impression of a mechanical doll was reinforced by the fact that his arms were bent perpendicularly at the elbow and thrust forward.
A brown walking stick hung over his right forearm and his left hand gripped a bank giro he was holding out for the short-haired young man at position number 2. Harry couldn’t see the face of the cashier, but he knew he was staring at the old man with a mixture of sympathy and irritation.

Stine Grette sat at position number 1, counting out 730 Norwegian kroner for a boy in a blue woollen hat who had just given her a money order. The diamond on the ring finger of her left hand glistened as she placed each note on the counter.

Harry couldn’t see, but he knew that in front of position number 3 there was a woman with a pram, which she was rocking, probably to distract herself, as the child was asleep. The woman was waiting to be served by fru Brænne, who was loudly explaining to a man on the telephone that he couldn’t charge someone else’s account unless the account holder had signed an agreement to that effect. She also informed him that she worked in the bank, and he didn’t, so on that note perhaps they should bring the discussion to a close.

At that moment the door opened and two men, one tall, the other short, wearing the same overalls, strode into the bank. Stine Grette looked up. Harry checked his watch and began to count. The men ran over to the corner where Stine was sitting. The tall man moved as if he were stepping over puddles, while the little one had the rolling gait of someone who has acquired more muscle than he can accommodate. The boy in the blue hat turned slowly and began to walk towards the exit, so preoccupied with counting money that he didn’t see the two men.

‘Hello,’ the tall man said to Stine, banging down a black case on the counter. The little one pushed his reflector sunglasses in place, walked forward and deposited an identical case beside it. ‘Money!’ he said in a high-pitched squeak. ‘Open the door!’

It was like pressing the pause button: all movement in the bank froze. The only indication that time hadn’t stood still was the traffic outside the window. And the second hand on the clock, which now showed that ten seconds had passed. Stine pressed a button under her desk. There was a hum of electronics, and the little man pressed the counter door against the wall with his knee.

‘Helge!’ Stine shouted over her shoulder.

‘What?’ The voice came from inside the open door of the only office in the bank.