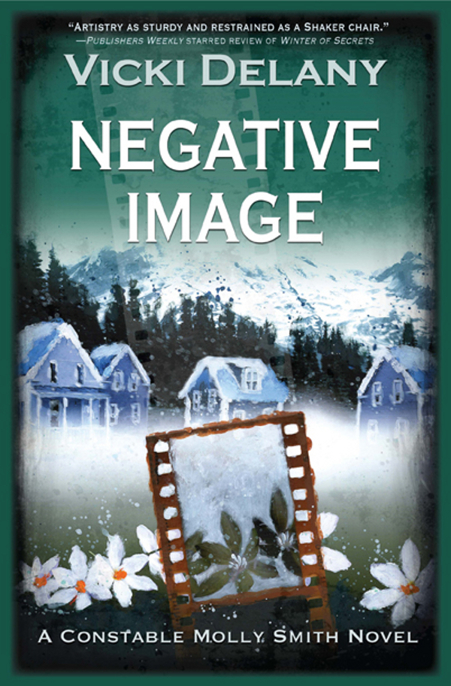 For Gail Cargo. Thanks, Mom

As I have no experience in law enforcement whatsoever, it would have been impossible to bring Molly Smith, John Winters and the Trafalgar City Police to life without much help from various police officers, in particular Detective Paul Burkart, Constable Janet Scott-Pryke, and Brita Wood of the Nelson City Police, Constable Nicole Lott of the Prince Edward County OPP, and Staff-Sergeant Kris Patterson of the Belleville Police Service. I have the good fortune to belong to a wonderful critique group consisting of Dorothy McIntosh, Madeleine Harris-Callway, Donna Carrick, Jane Burfield, and Cheryl Freedman, who helped enormously. Thanks also to Verna Relkoff of the Mint Agency for editorial help.

Advice on medical matters was provided by Doctors C.J. Lyons, Peter Duffy, and Dan Kalla. The tireless Cheryl Freedman put me in touch with the proper learned people.

Thanks to my colleagues and friends at Type M for Murder (
http://typem4murder.blogspot.com
) always ready with support, advice and friendship.

Rachel Lewis knew she was pretty, but she also knew that being merely pretty wasn’t good enough.

You needed a substantial dose of luck.

There were plenty of models and no-talent celebrities who were nothing special when you saw them without make-up, lighting, tousled hair arranged exactly so. They were simply women, ordinary women, whom the camera, with the right photographer behind it, transformed into something extraordinary. Rachel worked hard at keeping her body lean and in top shape, and although she was only five foot seven, short in the modeling world, she could walk with grace, and sex appeal, in the highest of heels. Her hair was mousy brown and thin, as common as dirt, but that’s what wigs and extensions were for. All she needed was to be photographed by the right photographer, someone who had not only skill behind the camera, but who also had fame, a reputation, contacts, and she’d be heading straight up the ladder, on her way to the big-time.

At last Rachel Lewis’ luck had turned. She’d found him.

She parked her cart in the hallway, and knocked loudly. When no one answered, she opened the door with her key. Tucking the small folder containing her even-smaller portfolio under her arm she eased the door open.

If the boss found out she’d approached a hotel guest on a personal matter, it would be enough to get her fired. To Rachel, that was a risk worth taking. She was tired of working here, anyway; the skiing season was over and she had no other reason to hang around.

“Housekeeping,” she called. Still no answer. She walked into the room. It was a pig-sty, but then again, it always was. It didn’t matter to her if he was a pig, all that mattered was that he was a fashion photographer and he’d agreed to look at her portfolio.

She’d been lucky, yesterday, to catch him coming out of his room. Although luck had little to do with it: she’d been waiting next door, listening to the sounds of a man getting ready for his day. When she heard the door open, she’d run into the hallway, and made her pitch.

She’d studied acting in school, and had rehearsed her lines as if she were going to be on the stage. He looked her up and down, with a lazy eye. The light in the hotel hallway wasn’t good, much too bright, illuminating every flaw, but she’d put on a cap that came low over her forehead and designer sunglasses that cost three hundred bucks. She might look strange, a hotel maid wearing sunglasses indoors, but figured it was worth trying for the effect. Same with the four inch heels she’d stuffed into a pocket of the housekeeping cart for just that purpose, and the belt that cinched the waist of the hideous black and mustard uniform.

He’d moved his eyes up and down her body, while she posed, one leg in front of the other, hip slightly forward. He told her he was in a hurry, but she had good lines and he’d look at her portfolio. If he liked what he saw, he said, he’d invite her for a…drink, and discuss her prospects. Leave it in his room, sometime. He walked away, and she’d gone back to the room she was supposedly cleaning and let her knees collapse underneath her. Today she’d brought the portfolio on which she’d spent every last penny of her savings with her to work.

Room service dishes. The food, cheese and pâté, bread and crackers, grapes and slices of melon, was untouched. She lifted the uncorked champagne bottle out of the pool of water in the silver bucket and was surprised at its weight. She held it to the light streaming in through the open drapes. Almost full. Lifting the bottle to her mouth she took a deep drink. Delicious. She held the champagne, bubbles gone, in her mouth for a few moments as she flicked through the detritus on the desk. Computer printouts, photographs of the mountains, tops still covered with snow but grass and trees coming back to life in the spring sunshine, shaking off the memory of a harsh winter. A few shots of people in town, women, young women, with jackets unzipped and pockets bulging with gloves and faces turned to the sun. Nothing, no one, special, she thought.

Clothes littered the floor. Underwear, socks, a thick hand-knit sweater. No women’s clothes. His wife—at first the staff thought she must be his daughter, perhaps even a granddaughter—had another room. Rachel took a quick glance at the door to the adjacent room. The lock was turned. Interesting that he’d shut his glamorous young wife out at night.

What did they say:
the rich are different than you and me
.

She popped a couple of grapes into her mouth and took another swig of champagne,
Moët et Chandon,
before settling down to work.

Someday she’d be the one discarding underwear on the floor for someone else to pick up, and leaving full bottles of
Moët
for the trash.

She took her cloths and bottles of cleaning supplies and pushed open the bathroom door.

The champagne and grapes rose up in her stomach.

“Man dead upstairs. Hotel guest. The maid found him when she went in to clean.”

“Have you seen him?”

“Is this likely to be our business?”

A small crowd had gathered in the lobby. Staff and hotel guests stood in silence, watching the police. Two paramedics stood by the elevator with their stretcher, the sheets clean and crisply folded.

Sergeant John Winters recognized the hotel manager. “I’m going upstairs for a quick look, Peter. Can you and your people remain here?” It was phrased like a request. It wasn’t.

He headed for the elevator. Constable Dave Evans followed.

“Who was first on the scene?”

“You stay here. No one in or out of the hotel, and no one unofficial upstairs until I get back. When Detective Lopez and the coroner arrive, send them up.”

He nodded to the paramedics. The elevator door opened as soon as he pressed the button.

The Hudson House Hotel was the best hotel in Trafalgar, British Columbia. It was an old building, old by western North America standards, built in the late 1800s. For most of the twentieth century, it had been lodging for itinerant loggers and miners. It turned into a backpackers’ hostel when young people discovered the area’s skiing and climbing opportunities. At the beginning of this century, as tourists got older and more affluent, less inclined to rough it, the hotel attached a new wing, underwent major renovations, and the old building was refurbished to a degree of luxury it had never before known.

Sergeant John Winters of the Trafalgar City Police looked at himself in the spotless glass paneling of the elevator. He and his wife had been reversing down the driveway, heading for a much-needed few days of hedonism in San Francisco, when his cell phone rang. He’d taken the call, and driven back up the driveway. Eliza had not been pleased at this change in plans. She’d taken it quite badly, and that surprised him. It wasn’t as if this was the first time in their long marriage plans had been canceled at the last minute. She was scarcely mollified when he said it would probably turn out to be nothing important and they’d catch the next flight. She slammed the door getting out of the car and dragged her suitcase to the house with shoulders set in anger while her boots, and the wheels of the suitcase, made the ground shake. He made a mental note to call her once he’d seen the body. Young police officers had been known, in their enthusiasm, to mistake an accidental death for a deliberate one. Nevertheless, he’d already called the forensic guys.