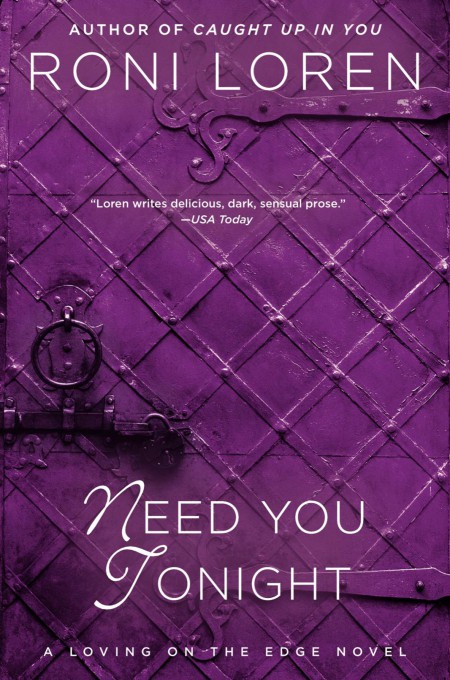 “Fresh, engaging, and incredibly sexy! Be prepared to have a bucket of ice cubes handy
to cool you down! It’s lip-biting good!”

“Amazing from the very first page. It is definitely one of the best books I have read.”

“A very steamy and satisfying read.”

“
Caught Up in You
is Roni Loren’s best book to date. An angsty backstory made beautiful by a hero who
doesn’t know how perfect he is. Don’t miss this Ranch treat!”

“41⁄2 Stars! Steamy, occasionally shocking, and relentlessly intense, this book isn’t
for the faint of heart. But with fiery, emotional characters and their blisteringly
passionate relationship, it is also one that isn’t easily forgotten.”

“Quite a ride. The story is heartfelt and pulls you into the relationships with the
characters.
Melt Into You
takes the traditional version of romance and twists it so that the idea of three
individuals in a relationship seems perfectly right.”

“This one is deeply emotional, gut-wrenching at times, and sexy as sin.”

“Hot and romantic, with an edge of suspense that will keep you entertained.”

—Shayla Black,
USA Today
bestselling author of
Ours to Love

“A sexy, sizzling tale that is sure to have readers begging for more! I can’t wait
for Roni Loren’s next tantalizing story!”

“This steamy, sexy yet emotionally gripping story has the right touch of humor and
love to keep readers coming back for a second round.”

CAUGHT UP IN YOU

PART I: NOT UNTIL YOU DARE

PART II: NOT UNTIL YOU RISK

PART III: NOT UNTIL YOU CRAVE

PART IV: NOT UNTIL YOU TRUST

PART V: NOT UNTIL YOU BEG

PART VI: NOT UNTIL YOU SURRENDER

PART VII: NOT UNTIL YOU BELIEVE

PART VIII: NOT UNTIL YOU LOVE

Penguin supports copyright. Copyright fuels creativity, encourages diverse voices,
promotes free speech, and creates a vibrant culture. Thank you for buying an authorized
edition of this book and for complying with copyright laws by not reproducing, scanning,
or distributing any part of it in any form without permission. You are supporting
writers and allowing Penguin to continue to publish books for every reader.

HEAT and the HEAT design are trademarks of Penguin Group (USA)

This is a work of fiction. Names, characters, places, and incidents either are the
product of the authors imagination or are used fictitiously, and any resemblance to
actual persons, living or dead, business establishments, events, or locales is entirely
coincidental.

Special Excerpt from
NOTHING BETWEEN US

Special Excerpt from
NOT UNTIL YOU

To my husband, my family, and my readers. Without your support, I would just be that
weird girl who spends way too much time thinking about imaginary people.

Someone’s naked ass is on my imported marble countertops
. That was Tessa’s first thought when she walked into her kitchen that warm Tuesday
afternoon. Not,
Why is Doug home this early?
Or,
Why does he have his pants around his ankles?
And most definitely not
Why is my best friend moaning like an injured cat?
Nope. Tessa’s brain couldn’t absorb those things just yet. Instead all she could
think about was how there was a butt cheek sliding along the spot where she’d chopped
strawberries for breakfast.

The two occupants in the kitchen didn’t even notice they were no longer alone, apparently
too caught up in their counter defiling to bother. God, were they
that
oblivious and swept up in passion? It’s not like she’d been particularly quiet walking
in. And she’d slept with the man who’d dropped trou in this little tableau for the
last thirteen years. She knew he didn’t inspire losing yourself to the moment. But
maybe he saved his good tricks for Tuesday afternoons when he fucked the woman Tessa
would’ve trusted her life with before today.

Tessa cleared her throat, attempting to draw their attention, but all that greeted
her was the sound of Doug telling that
lying
bitch
how hot she was. Rage washed through Tessa in a slow, powerful roll, boiling up and
over until she was shaking with it. She calmly set down her purse next to the fruit
bowl and wrapped her hand around a large navel orange. Without pausing to reflect,
she lifted the fruit and launched it right at her husband’s head.

It went whizzing past him without notice, sailing into the living room, but she couldn’t
stop herself now. She picked up another and hurled it even harder. This one hit him
right on the ear with a fat thud.

“What the fuck?”
Doug’s hand went up to his ear, and he swiveled his head her way. “Shit.”

The traitor on the counter opened her eyes then, her gaze going wide.

But Tessa kept throwing. Oranges, apples, a grapefruit that landed with satisfying
impact. It was as if some other force had possessed her. Fruit whizzed across the
kitchen, pelting the both of them as they scrambled to get up and pull their clothes
around themselves.

“Ow, Tessa, stop it! What the fuck is wrong with you?” Doug roared as he yanked at
his pants with one hand while trying to fend off flying fruit with the other.

“What is wrong with
me
?
Me?!
” Tessa shouted, knowing she sounded like a lunatic but unable to stop herself.

Tessa pinned her former best friend with a glare. “Did you just
dare
speak to me?”

“Marilyn, sweetheart,” Doug said softly, putting a hand on her elbow and blocking
her from Tessa with his body. “Why don’t you get out of here? I’ll deal with her.”

Sweetheart?
Deal
with her? Loud, crashing bells were going off in Tessa’s head. She was glad the knife
block was out of reach because she wasn’t sure she could trust herself in that moment.

Marilyn nodded after a quick, worried glance at Tessa then hurried through the living
room toward the sliding glass doors that led to the pool area and a backyard exit.
Apparently, she knew better than to try to walk by Tessa to get to the front door.
Wise move. Because Tessa was ready to throw down Jerry Springer style.

With a tired sigh, Doug turned back to Tessa, his fly still unbuttoned and his dick
still half-mast behind the material. The bastard hadn’t even lost his erection. In
fact, he looked more annoyed that he’d been interrupted than ashamed of what he’d
done. Tessa’s fist balled. “You lying, cheating asshole.”

He pulled on his dress shirt and looked around at the carnage of busted fruit on the
floor. “Call the maid and have her come in early to clean this up. It’ll draw ants
if it sits too long. I’ve got to get back to my office.”

Tessa blinked, almost too stunned to speak. “
That’s
what you have to say for yourself?”

“You don’t want to hear what I have to say.” He adjusted his cuffs like it was any
other day of getting ready for work and not like the whole foundation of their marriage
had shattered beneath them.

His mouth curled in condescension. “Fine. You want to hear that I need something on
the side? That you don’t satisfy all of my needs?”

“Your
needs
?” If she’d had another piece of citrus to throw, she would’ve reached for it then.
How many nights had she put all she had into pleasing him even when he hadn’t put
half the effort toward her? How many times had she donned expensive lingerie trying
to catch his eye? She’d been willing to do
anything
for him. She’d loved him.

And he’d been screwing around on her the whole time. With her
best friend
. The thought almost doubled her over. She reached out and grabbed the edge of the
counter.

“You have the nerve to talk to me about love right now?” she asked, her throat trying
to close.
Them.
So it was more than Marilyn. She wondered if Marilyn knew she was just the tramp in
the Tuesday slot on his calendar. “You’re disgusting.”

His lips curved back into that patronizing smirk he was so good at. “And you’re boring
in bed and my intellectual inferior, but I’ve learned to live with it. At least you’re
nice to look at now that you’ve gotten your gym routine back on course.”

The hateful words knocked the breath right out of her. Doug had said mean things to
her before in the heat of the moment. They’d been together since high school, so of
course they’d had their fights. He could be critical beyond reason, always watching
that she didn’t eat too many calories or go outdoors without makeup or say the wrong
thing in public. She’d tolerated it because she knew how concerned about image he
was in his role as the great Pastor Barrett of the Living Light mega-church. And she’d
comforted herself with those moments when he was sweet and indulgent with her behind
closed doors. He had the capacity to make her feel like a princess. And even though
those times had grown few and far between over the last few years, she’d had no idea
his opinion of her had sunk so low.
Boring in bed. Inferior. Stupid.

God, is that what he told the women he cheated on her with?
My wife isn’t too bright, and she’s clueless in the sack.

She grabbed her purse, her stomach threatening to toss up all its contents. She couldn’t
stand here for another second and look at his smarmy face, smell the scent of sex
in the air. “Go to hell, Doug. I hope you’re happy with your college-educated whores.
Now you won’t have to worry about me getting in the way.”

He scoffed. “Come on, Tessa. Stop being melodramatic. You’re not going to
divorce
me. Your life and everything in it exists because of me. Leave and it all goes away.
You’re going to give up all this just because I like a novel fuck every now and then?
Please. You wouldn’t even know how to survive without a man taking care of you.” He
grabbed his wallet and flipped a piece a plastic her way. “Here, take the credit card.
Go punish me by buying something useless and extravagant—you’re good at that—and we’ll
move on.”

The credit card landed at her feet, and she had the urge to spear its platinum face
with the heel of her Jimmy Choo pump. He was right. If she left him, every bit of
her lifestyle would disappear in a poof. From the clothes on her back to the oranges
she’d hurled—all of it was funded by him. There’d be no way to prove his affair in
court, not with the legal demons he could afford to hire. And she’d signed a prenup.
She’d be left with a pittance of alimony. All the comfort and security she’d worked
toward her whole life would be gone. She’d be back where she started all those years
ago—a nobody with nothing.

Alone. With no money of her own and only a high-school education to her name.

She bent and picked up the card from the floor, turning it in her fingers before dropping
it in her purse.

Without another word, she turned on her heels and calmly walked back out to her Mercedes.
When she made it into town, she bought the two most extravagant things she could think
of.

The services of an attorney.

And a plane ticket home.

It’d be the last of Doug Barrett’s money she’d ever spend.