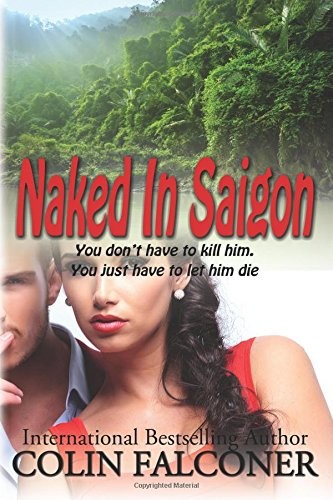 Book 3 in the Naked trilogy

There is no better way for a man to kill himself than by slowly drinking himself to death in his own bar surrounded by scantily dressed girls dancing to rock music. If there was a better way to drown disillusion then he hadn’t found it. He might have gone on that way, too, if the VC hadn’t tossed a grenade through the door and saved his life.

He was watching an American sergeant in the corner of the bar and was starting to get curious. The guy was sipping at his beer like a virgin, sending the girls away, fiddling with the straps of the leather briefcase he held under his arm like he was petting a dog. No one ever came in his bar with a briefcase. If he didn’t want to drink like a man and he didn’t want a girl, what was he doing here?

He didn’t like the look of him, had a wrong feeling that just wouldn’t let up. In fact, something didn’t feel right about the whole day.

Someone put another song on the jukebox: “All in the Game.” He hated that damn song. It took him back to Havana, just before Fidel walked in and changed things around forever. It reminded him of Magdalena, and he didn’t like to be reminded.

He still supposed another man would have played that differently, would have believed her when she said she wanted a second chance. But he hadn’t made a career out of believing people, only watching what they did.

Still, wasn’t a day -went by he didn’t regret it.

Should he have given her a second chance? Rules were rules and it was rules that kept you alive, not sentiment. It was the same with women. If a girl did it to you once she’d do it again. He’d given her the chance and she blew it. Maybe it was a lucky escape, perhaps he was better off this way, this was the life he knew and understood.

He wondered where she was now. He knew she was safe, and that she’d gone back to Hollywood. The mob had finally signed off on Kennedy. An amateur’s job in his opinion, there had been two attempts in the weeks leading up to November 22: one in Chicago, one in Tampa. Hoover could have stopped it if he’d wanted to, so could a lot of other people. Now they talked about old Jack like he was the love child of Abraham Lincoln and Gandhi. Camelot, for Christ’s sake. When he was alive, they hated his guts, and Bobby and Joe as well.

They caught up with Bobby finally, too, a couple of years back. Took the idea straight out of Sinatra’s movie,
The Manchurian Candidate
. Those boys on the East Coast were just too cute.

All of it was inevitable, and the only people who didn’t know that were the American public.

Kennedy’s assassination had worked out well for everyone; the military that wanted this dirty little war, and Salvatore and the rest of the East Coast mob bosses who wanted the war every bit as much as they did. They needed the fight for democracy in Indochina so they could get access to the poppy fields.

It was getting on towards evening, but there was no sign of the heat letting up. The strip was just starting to come alive, pulsing with gaudy neon signs:
The Capitol, Blue Diamond, Fifth Avenue, The New York.
The servicemen could get anything they wanted right here, from a pizza to a blow job. Rock music pumped out of the bars over the constant tinny whine of a thousand two-stroke motorcycles on the Tu Do.

Saigon had changed beyond recognition these last few years. When he’d first arrived the tree-lined boulevards had been filled with bicycles, now the streets were choked with Vespas and Lambrettas weaving and honking their way between the convoys of olive drab trucks and jeeps belching black diesel smoke, massive finned Chevrolets with red, white and blue stickers on the chrome bumpers showing an American and Vietnamese handshake.

American and ARVN soldiers were everywhere now, their fingers hovering over the triggers of their M-16s. There were sandbagged machine guns outside the Doc Lap palace and tanks in the streets.

Most of his customers were inside the bar, despite the heat. There were a few bentwood tables and iron chairs out on the sidewalk but his customers rarely risked those any more, most sat inside where the wire mesh grill on the window at least offered some protection against VC grenades.

He paid a boy to stand guard on the door; it was his job to watch for any unwelcome parcels the Viet Cong might think to toss through the door. One of the bar girls stood there messing with him, her hand on her hip, smoking a cigarette. She had on an electric pink mini skirt and a tight white t-shirt . There were hookers on the Strip back home had more subtlety. He thought the Vietnamese girls looked so much prettier in their traditional
ao dai,
but that wasn’t his call.

One of the bar girls sat herself down on the lap of one of the GI’s and put her tongue down his throat. There was the sickly sweet smell of marijuana from the journalists parked in the corner. It was just another night at the
Nevada
.

His eyes went back to the sergeant in the corner. He looked like he was waiting for someone. The guy was sweating too much, sure it was hot, but it was always too damn hot in this country. One of the girls sat down and started flirting with him and he just ignored her. What was the guy’s problem?

“Light My Fire” started playing on the jukebox. That was better. A crowd of crew-cut soldiers came in, wearing jeans and t-shirts, and the bar girls launched themselves at them like sharks hitting raw bait. This moving riot surged towards the bar. It was just another night at the
Nevada
.

Seven years since he had seen her. Why did he still even think about her? He had tried to put her out of his mind for so long, he had this trick--whenever he thought of her he would make himself think of something else: the weather, the football results back home, the ache in his knee where he had got himself shot that time in Guatemala. It had worked okay for a while, but then it just stopped working at all.

He wondered what she was doing and he hoped she was okay. He had done all he could for her at the time.

Or could he have done more?

He looked back at the guy with the briefcase, he would have to go over there and talk to the guy. He looked like he had been led into the bar at gunpoint. What was his problem? Yet another of the girls, a stunner called Noi in a tight red dress and red stilettos went over to give it a try. She put her hand on his knee and he pushed her away, but little Noi was a tiger and she took his indifference as some kind of challenge and grabbed the big sergeant by the crotch and put her tongue in his ear, her trademark move.

He pushed her away so hard she almost fell onto the floor. Noi changed from kitten to devil in half a second.
“You fuck off number ten cheap Charlie! Why you no fucking want girl you bum bum boy, hey? You fuck off out of my bar!”

Well now he would have to go over there, remind Noi--yet again--that it wasn’t her bar, and then have a longer conversation with the sergeant about treating the girls nicely. They weren’t his employees, technically, but he didn’t hold with abuse towards women. If a guy couldn’t handle a bar girl without throwing his weight around then he had no business in the
Nevada
.

Reyes came around the bar and pushed his way through the crowd. Noi was still screaming and the guy was staring back at her scared and angry like he wanted to start throwing punches. He had a white-knuckle grip on the damned briefcase.

It was then he noticed that the boy on the door wasn’t there and he knew in that moment what was going to happen. He saw a blur of movement at the edge of his vision, someone ran past the bar and threw something, there was a shout and a dull thud as something hit the floor and bounced off the jukebox.

Bar stools crashed over and girls shrieked. Those closest to the door hurled themselves outside, others scrambled for shelter behind the bar. The sergeant just sat there, his mouth open. Reyes threw himself at Noi, knocked her down and covered her with his body.

You can’t burrow through a cement floor with your fingernails while your body is curled into a ball on top of a flame-dressed bar girl, but shit, you can try. Jesus, it was Havana all over again.

Afterwards, it was just so damned quiet. He sat up, astonished to find himself alive. Everything was still. Some people didn’t move because they were in shock, others because they were dead or so badly injured that they couldn’t.

He had been saved by three big Marines who had no chance of getting out of the way and took most of the blast. There was not much of them left.

He looked down at his legs, checked himself for wounds. He couldn’t believe he was in one piece, though his clothes had been shredded and singed by the blast of heat.

The explosion had deafened him. He watched one of the bar girls run for the door, it looked like she was screaming but he could barely hear her over the constant ringing in his ears. Noi lay next to him, curled in a ball, shivering with shock. He shook her, tried to get her to sit up, but she wouldn’t move.

His bar looked like a butcher’s shop. Some of the bodies were twitching. The big sergeant with the briefcase was still clutching the briefcase, but his arm was no longer attached to the rest of him.

Flames crackled between lumps of shattered concrete and corrugated iron. Smoke billowed out into the street. He thought he was going to choke.

He decided to take the briefcase. He uncurled the dead man’s fingers from the handle and hauled Noi to her feet, led her out into the street through the tangle of wreckage and the black pools of blood.

He saw one of the girls trapped under some debris, pulled her clear of the burning lintels.

The black smoke was burning his eyes but at least the ringing in his ears had started to clear. He heard police sirens and the clanging of ambulance bells in the distance. Already there was an army chaplain moving among the bodies, giving last rites. A soldier was kneeling over one of his buddies, making a tourniquet from strips torn from his own uniform.

Reyes didn’t remember wandering away. He had walked two blocks before he remembered where he was and realized he was still holding the briefcase. People in the street were staring at him.