My Savage Heart (The MacQuaid Brothers) 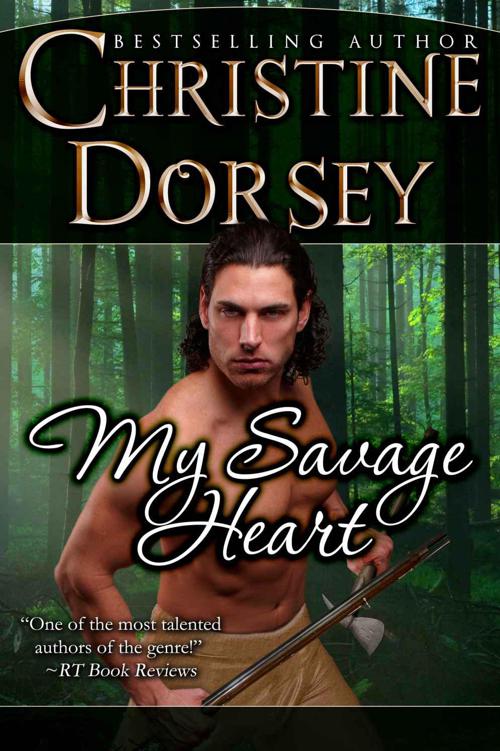 Ebook Design by
A Thirsty Mind

All rights reserved. No part of this book may be reproduced in any form or by any means without the prior written consent of the Author, excepting brief quotes used in reviews.

This book is a work of fiction. Names, characters, places and incidents are either products of the author’s imagination or used fictitiously. Any resemblance to actual events, locales, or persons, living or dead, is entirely coincidental.

This ebook is licensed for your personal enjoyment only. This ebook may not be re-sold or given away to other people. If you would like to share this book with another person, please purchase an additional copy for each person you share it with.

With love to my oldest grandson, Preston, the bravest kid I know!

And as always for Chip.

In memory of Domino, whose unconditional love enriched our lives for over fourteen years... and who never tired of sprawling by my computer to keep me company while I wrote.

The figure slumped in the winged chair by the fireplace straightened, his head jerking around. Fear sparked to life in light green eyes as they scanned the room’s shadows. When his gaze snagged on the man standing tall, filling the doorway, his frown deepened. His voice, rusty with sleep, nonetheless carried the sting of accusation. “Nearly a fortnight ago, aye. Where in the hell have you been?”

Wolf stepped into the small pool of light radiating from the single candle sputtering in its brass holder. Shifting the long rifle he held to the crook of his arm, he regarded the older man with narrowed jet black eyes. “I was on the summer hunt... with my people.”

Seeing such frustration might have moved Wa`ya, had it been any other who showed it. But Wolf’s expression remained unreadable; the chiseled features of his handsome, bronzed face, unsympathetic. He knew of his father’s leg. The injury was the only reason he’d come—that and the gnawing worry it was Mary who needed him. “You should be more careful,” was all he said.

“A hell of a lot you care, coming here dressed like a savage!”

“My clothes suit me.” Wa`ya watched as Robert’s contemptuous gaze traveled downward from the long black hair that hung past his shoulders. The belted hunting shirt was homespun, the leggings doeskin. “Besides,” Wolf continued before further disapproval could be voiced. “I never implied I cared.”

“Why you ungrateful pup! I never should have—” Robert’s face raged purple with anger as Wolf’s large hand clamped over his shoulder, preventing him from standing more than the broken leg ever could.

“I did not come to renew old conflicts.” Wolf turned, his moccasined feet silent on the rug as he headed for the door and the forest beyond.

“Wait. Raff. There is something you must do for me.”

At the sound of his English name, Wolf glanced over his shoulder. He raised a raven brow, and waited, annoyed with himself that he paused... even more annoyed that he’d even come to this place.

“You must go to Charles Town for me.”

The words were no sooner out than Wolf lifted the latch.

“Hell and damnation Raff.” Robert heaved himself forward on the chair, reaching for the crude crutch one of his servants had fashioned. “You owe me. Christ a’mighty you’re my son.”

Wolf’s snort was derisive. “I’ve no doubt of that.” No one ever accused Robert MacQuaid of not doing what needed done himself, whether it was working his plantation, cheating the Cherokee, or defiling innocent women. At the thought of his mother, Wolf took a deep breath of pine-scented air. He didn’t look back when he heard the clomp, clomp of the crutch coming toward him. “Send someone else to fetch your supplies.”

That, too, Wolf believed. Since the day Wolf left this house, Robert had ignored his son’s presence in the Lower Towns of the Cherokee nation. If there was anyone else Robert could prevail upon, the message would never have reached Wolf that his father wanted him.

“Logan is north fighting the damn heathens, and I can’t trust anyone else to bring her here.”

“My brother should well consider his wife’s safety before he searches for other battles.”

“Mary’s fine. And what in the hell are you talking about—her safety? The girl... hell, all of us are as safe here as we would be in Charles Town.” Robert’s light eyes narrowed. “I’ve dealt with those people for years. Not one of your so-called Cherokee brothers has the guts to cause any trouble in these parts.”

It was a taunt, and in the past, Wolf might have responded. Trouble between the English settlers and the Cherokee was coming, faster and harder than Wolf seemed able to stop. But Robert was beyond enlightening, even if Wolf were inclined to try. And besides, Robert MacQuaid’s words no longer had the power to wound him. He didn’t care what the old man said... or did, either, as long as it didn’t affect the Cherokee or Mary.

At least that’s what he thought till he heard his father’s next words.

“You’re what?” Wolf turned on him so quickly that Robert, hunched over the crutch, flinched.

“I said I’m marrying again.” Robert’s voice was booming, defiant. “It isn’t right that I should live without a woman. I’ve built this place.” Robert’s head jerked around to indicate what he considered his domain. “I need someone to share it with me. Someone refined.”

Wolf’s burst of laughter woke the old dog sleeping on the porch. She lifted her head and sniffed the air before settling back on her paws. There had once been someone who loved Robert, though Wolf couldn’t understand why she had. Perhaps she hadn’t been refined by Robert’s definition, but she had been sweet, with a pure, loving heart. But Wolf’s mother was tossed aside by Robert with less thought than he’d give a weed he trod upon.

Robert puffed out his chest. “Lady Caroline Simmons is coming from England to marry me.”

“Lady Caroline?” Wolf arched a dark brow. “What would a titled Lady want with you?” Wolf knew what they’d wanted with
him
. During the years he’d spent in England, he’d seen the inside of more ladies’ boudoirs than he could recall. But
he’d
offered them youth, and a strong, powerful body. A body that would entice even without the added hint of savagery of which the English gentry seemed so in awe. He was amazed how many titled women wished to relieve the boredom of their lives with a half-blooded Cherokee. It was as if they sensed that no amount of silken waistcoats and lace cravats could ever tame him. As they peeled off each layer of civilization, they searched for some primitive passion to engulf them. Wolf had tried never to disappoint.

But it hadn’t taken Wolf long to realize where he stood with the fine ladies of England. Whether maid or madam, the light of day sent them scurrying for the security of their stuffy convention. The tedium of which drove Wolf back to his native land.

“You find it difficult to believe that the daughter of an earl would marry me?” Robert said. He straightened as much as he could while forced to lean on the crutch for support.

Wolf didn’t trust himself to speak. He’d been told by his uncle, Tsesani, how anxious his mother had been to wed Robert. But she’d died nine years ago, while Wolf was in England. He hadn’t even known of her passing until he returned to his homeland the following year. But all the while he’d known this: Her only son, Robert’s son, carried the title of bastard.

“Wealth!” Robert’s shallow face lit up. “Wealth will buy you anything, boy. The sooner you learn that, the better. ’Tis the only thing that matters.”

“And how you get it is immaterial, I suppose?” Wolf was annoyed with himself for getting embroiled in this discussion. He knew very well how this man thought. What he was willing to do.

“Do you think Lady Caroline cares how I obtained my wealth?” Robert’s expression was smug.

“No.” Wolf stared at him, not bothering to conceal his contempt. “I suppose not.” Most of the women he met in England were vain and self-centered. If this Lady Caroline was willing to be bought, Robert was right. She probably wouldn’t give a thought to the Cherokee people who’d been cheated or the woman who lived with Robert for years only to be cast aside.

“I’ll pay you to fetch her for me.” Robert’s shoulder bunched beneath his ear as he balanced himself between the birch sapling and his good leg. “Lady Caroline Simmons should reach Charles Town within a sennight. Hell, she might be there now.”

Wolf opened his mouth to tell him what he could do with his money and his fine English wife, but a vision of his mother swam before his eyes. That day when he was ten summers. The day her son was taken from her. Though she later died of the fever, it was Robert MacQuaid who had killed her. He’d stripped away her spirit. And her death had gone unpunished and unavenged... until now.

When Wolf looked up, his eyes, dark as the sky behind him, were hard. His father just handed him the perfect means of revenge and didn’t even realize it... yet. But he would. Wolf would see to that. His wide, sensual mouth curved in a parody of a smile.

He would wreak his revenge, and no one could do anything about it. Lady Caroline Simmons didn’t stand a chance against him.

“I shall fetch your woman,” Wolf declared before leaving the porch and melting into the surrounding forest.

S
he wasn’t what he expected. But then women usually weren’t.

Wolf leaned against the dingy whitewashed wall in the crowded taproom of Cooper’s Inn studying the woman who had crossed the ocean to become his stepmother. If the notion didn’t make him so angry, he’d laugh aloud at the thought. Robert wanted a refined lady, and this woman was willing to sell herself into the job. But it was all for naught. For this porcelain doll wouldn’t last a fortnight on the frontier.

She lifted her face and glanced around the room, her eyes large, reminding him of a frightened doe, and Wolf felt a twinge of conscience. For what would happen to her. For what he would do to her. But he quickly suppressed any feelings of compassion.

He’d instigated none of this.

Lady Caroline Simmons, with her moonspun hair and cameo face, sealed her own fate when she allowed greed to lure her from her element. By coming to South Carolina, she offered Wolf the perfect chance to avenge his mother’s disgrace. And Wolf wasn’t one to ignore fate.

Schooling his features into a pleasant expression, Wolf pushed off from the wall and strode the length of the smoky room. Few patrons spoke as he passed, though more than one pair of eyes followed his progress.

Daniel by Kathi S. Barton
Carry Me Home by John M. Del Vecchio
Psycho Alley by Nick Oldham
The X'ed-Out X-Ray by Ron Roy
Taken By Storm by Donna Fletcher
For Ever and Ever by Mary Burchell
The Plagiarist by Howey, Hugh
Blush Duo - Marriage Under the Mistletoe & The Christmas Inn by Helen Lacey, Stella Maclean
Devil Ash Deceit (Devil Ash Saga) by Olson, Mitchell
Sniper Elite by Scott McEwen