My Life in Dog Years 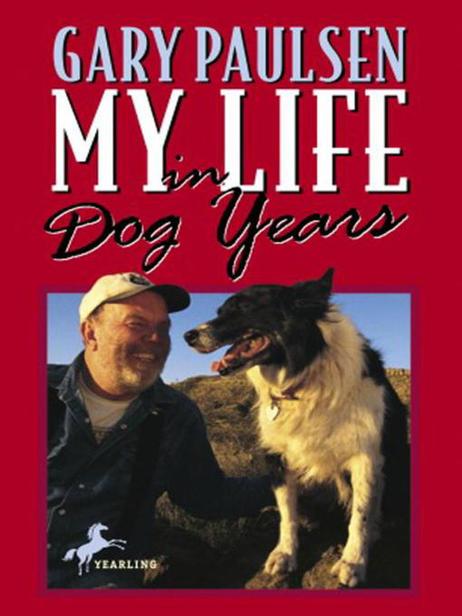 For more than forty years,
Yearling has been the leading name
in classic and award-winning literature
for young readers.

Trust Yearling paperbacks to entertain,
inspire, and promote the love of reading
in all children.

OTHER YEARLING BOOKS YOU WILL ENJOY

Though I ran sled dogs for close to ten years, did some twenty-two thousand miles with them, this book is not about sled dogs or running them. They were truly wonderful and I have written of them in other books. This book is about other dogs in my life and other times. I am—I say this with some pride and
not a little wonder—a “dog person.” I make no excuses for unabashedly loving them— all of them, even some that have bitten me. I have always had dogs and will have dogs until I die. I have rescued dozens of dogs from pounds, always have five or six of them around me, and cannot imagine living without dogs. They are wonderful and, I think, mandatory for decent human life.

All that said, there are some dogs that are different, special in amazing ways. Josh is one, and you’ll read about him later in this book. Cookie was another.

Cookie was my lead dog when I first started to run dogs, and she was also my lead dog in my first Iditarod sled dog race; she took me from Anchorage to Nome, Alaska, when most people—including me—thought I couldn’t do it.

But she was more. She was a good friend, a kind of dogsister or dogmother to me, and
while I have written much of her in other places, she belongs in this book, too.

Cookie was given to me by a man who thought she was so sick she couldn’t run any longer. She merely had worms, and when I wormed her she became a wonderful sled dog, and then a wonderful lead dog.

I did not set out to race dogs; I used them for work. I brought in wood with them, went to the Laundromat in town with them (it was grand to tie the dogs up to the parking meter and watch people jump as they walked by) and trapped with them.

In January of 1980, I was running a seventy-five-mile line, trapping beaver. I had previously trapped with a friend, but this year I was trapping alone, not the wisest thing to do, since there is some risk from bad ice or injuries and it’s better to have a companion. I was alone when I made a mistake that nearly killed me.

The ice around beaver lodges is very dangerous. Beavers live in their lodges and come out of underwater tunnels to get food they have stored at the bottom of the river or pond through the summer, in the form of branches stuck down in the mud. Each time they come out they let air out of their noses and it goes up to make bubbles under the surface of the ice, and this, along with the beavers’ rubbing their backs on the underside of the ice, keeps the ice very thin near a beaver lodge. It can be fifty below with two-foot-thick ice around the whole lake and the ice near the lodge might be less than a quarter inch thick.

I had parked the sled near a lodge and unpacked the gear needed to set a group of snares. Cookie was leading the work team of five dogs and they knew the procedure completely by this time. As soon as I stopped the sled and began to unpack they all lay down, curled their tails over their noses and went
to sleep. The process could take two or three hours and they used the time to get rest.

You think there is time to react, that the ice will give way slowly and you’ll be able to hang on to the edge, somehow able to struggle to safety. It’s not that way at all. It’s as if you were suddenly standing on air. The bottom drops out and you go down.

I was wearing heavy clothing and a parka. It gathered water like a sponge and took me down faster.

Two things saved me. One, as I went down my hand fell across the rope I had thrown across the ice, which was still tied to the sled.

Two, as I dropped I had time to yell— scream—and the last thing I saw as I went under was Cookie’s head swinging up from
sleeping and her eyes locking on mine as I went beneath the surface.

The truth is I shouldn’t have lived. I have had several friends killed in just this manner—dropping through the ice while running dogs—and there wasn’t much of a chance for me. The water was ten or twelve feet deep. I saw all the bubbles from my clothing going up to the surface and I tried to pull myself up on the rope. My hands slipped and I thought in a wild, mental scream of panic that this was how it would end.

Then the rope tightened. There was a large noose-knot on the end and it tightened and started pulling up and when the knot hit I grabbed and held and the dogs pulled me out of the hole and back up onto the ice. There was still very little time. I had a quart of white-gas stove fuel on the sled for emergencies and I threw it on a pine tree nearby and lit a match and set the whole tree on fire and,
in the heat, got my clothes off and crawled into a sleeping bag. I stood inside it and held my clothes near the flame to dry them.

She saw me drop, instantly analyzed the situation, got the team up—she must have jerked them to their feet—got them pulling, and they pulled me out.

That was January 1980. It is now 1997 as I write this, and everything that has happened in the last seventeen years—everything: Iditarods, published books, love, living,
life
—all of it, including this book, I owe to Cookie.

This book is dedicated to her memory.

Mother stood looking down at the puppy I was holding.

It was a little black female with a perfect white circle on its side and I clutched it close to my chest and saw only the puppy, me, and the endless possibilities.

I did not realize how impossible the situation happened to be:

I was just seven years old. We were in a mountain village in the Philippine Islands in 1946, where my mother and father had come on a sort of work-vacation-getaway trip. My father was in the army there and Mother and I had taken a troopship from San Francisco to be with him.

The dog represented a problem in more ways than one. We lived in strictly controlled base housing, such as it was, and Mother wasn’t sure if dogs were allowed. But that was just for openers.

The village we were visiting raised dogs for food. I had just—to my utter seven-year-old horror—watched them strangle a dog for cooking. I grabbed the puppy thinking only to save it, but it was so cute that I immediately loved it and would not let it go. I had never had a dog before but there was
absolutely no doubt in my mind that this dog,
this
dog, was meant for me.

The village headman who owned the dog was not eager to give it away and had reached to pull it back. Mother, who had been dickering over some carvings she wanted to buy, had seen the man reach for me and had come over like a tigress, ready to attack him, only to find that I would not let the puppy go.

I nodded. “I want to save this one and take it home.”

“How many pesos for the puppy?”

He understood that and they started to
haggle over price. My mother loved it and was in her element. I knew I’d won when she finally nodded, handed the headman some money, and motioned to the Jeep where my father and our bodyguard waited.

I do not remember much of the drive back down to the base. I sat in the back next to the bodyguard—a sergeant who had just fought through the Second World War and was completely bored with me, the puppy and life— and cuddled the dog.

The Jeep was open, with the top down, and conversation was nearly impossible at highway speed, but as we neared the base Father slowed down and Mother turned to me and smiled. “What are you naming her?”

I pointed at the white circle on the pup’s side. “Snowball.”

And so we became friends, Snowball and I, and more than friends.

It was a very strange time in my life. I was
only seven and found myself dropped into a world that was in many ways insane. My mother and father were caught up in the whirl of being an officer and officer’s wife involved in some way with the civilian government. This, coupled with the fact that they were getting a good start on their drinking careers, meant that I almost never saw them, and when I did they were usually not sober.