Read My Life From Hell Online

My Life From Hell 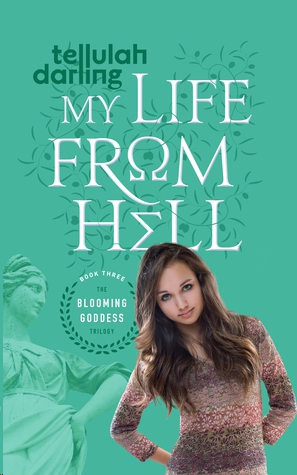 All rights reserved under International and Pan-American Copyright Conventions. No part of this book may be reproduced in any form or by any electronic or mechanical means, including information storage and retrieval systems, without permission in writing from the author, except by reviewer, who may quote brief passages in a review.

My life from hell / Tellulah Darling.

Issued in print and electronic formats.

This is a work of fiction. Names, characters, places, and incidents either are the product of the author’s imagination or used fictitiously. Any resemblance to actual persons, living or dead, events or locales, is entirely coincidental.

Excerpt from My Ex From Hell

10)
Getting Stabbed
: As a crazed junkie jonsing for magic and blaming me for no longer having her amped up popularity and hotness, Bethany Russo-Hill will once again manage to gut me like a fish. This time with something that causes my accelerated healing powers to fail me, and so this attack will be fatal. Instead of merely bloody, exceedingly painful, and
almost fatal
, like the last one.

9)
The premature death of my friends
: Unable to break through the wards at the apartment of Hephaestus, God of Fire, Volcanos, and Technology (where I am currently staying) in order to kill me, Zeus and Hades will find a way past the wards at my old school and kill all my friends instead.

8)
New deadly foes
: Some other wackjob Greek god, who I have not yet met, will decide to show up and wreak havoc and/or try to kill me before the equinox.

7)
Old deadly foes
: Since it wasn’t enough payback that my real mother, Demeter, pretended to be my drunk, adoptive, love-withholding parent Felicia for my entire life, she will make a deal with one of my enemies to somehow screw me over; thus hastening my downfall and death.

6)
Not being up to the job
: Even though my higher superior goddess power makes me capable of taking out the minions of Hades and Zeus, those gods have an inexhaustible supply of minions. When Zeus and Hades set them full force against me, which they’re sure to do in the final battle, I’ll be exhausted (and thus dead) before they’ve really tapped into their stockpile.

5)
Kai being an idiot
: Kai
won’t
show up to perform the love ritual with me on the equinox, thus assuring Zeus and Hades emerge victorious, with more expendable human casualties in their ongoing war. It’s totally unfair of Kai to be mad at
me
, Sophie, just because before my human self was even born, my goddess self chose to betray him. Stupidly, I still love that idiot.

4)
Kai being a different kind of idiot
: Kai
will
show up to perform the love ritual with me on the equinox. But because the stuff that happened with Persephone still hurts him, the ritual won’t work, thus assuring Zeus and Hades emerge victorious, with more expendable human casualties in their ongoing war. Insert another Persephone rant here. And some choice words for Kai in the bargain.

3)
Me self-destructing
: This constant anger I feel since learning that Persephone betrayed both my mother and Kai, my mother pulling me out of Hope Park, and being stabbed and left to die will get the better of me. I’ll spontaneously combust in a giant bomb of rage, spewing destruction across a massive blast zone, and ensuring Zeus and Hades emerge victorious etc etc.

2)
Fear-of-aftermath affecting my game
: Even if I win, what will my future hold? Can I put “saved world” on a college application? If I fulfill my destiny next week, where do I go from there? A
Where Are They Now
pity piece in some Greek god trash rag?

1)
Me getting it all so wrong
: The prophecy about me being the savior of humanity will be totally off-base and the one about me being an instrument of destruction will nail it. Come spring equinox, I, Sophie Bloom, will personally destroy the Earth and everyone on it. Probably including myself.

Of all the Prince of Darkness’ powers, his best were his bone-melting super-kisses. Which is why, when my boyfriend Kai, (formally known as Kyrillos, son of Hades, Lord of the Underworld) pushed me up against my bedroom wall with a liplock of mind whacking proportions, I didn’t do much other than grip his shoulders, try to stay in an upright position, and willingly participate.

But as right as it felt, I also knew that it was very very wrong.

“Overrated,” Kai murmured, nudging his hips up against mine. Instead of talking, he opted for Plan B, which was pretty much a new and improved version of Plan A. His hand clasped the back of my head to pull me closer.

If I pressed myself any harder against him, I’d be behind him.

Maybe that would be a good thing. Then I wouldn’t be distracted by things like the way his stupidly gorgeous-lashed eyes fixated on me, their normal espresso brown darkened and full of heat.

Kai shook his head, flinging a wayward lock of dark hair out of his eyes. That just made me want to sink my hands into his hair. And like the most pathetic Pavlovian conditioning, one of my hands snaked up to twine my fingers into the curled ends just below his ears.

His breath caught at my caress.

Kai leaned forward and gave me the most fleeting, teasing kiss, his lips brushing mine. My stomach fluttered at hummingbird speed during that split second of connection.

Kissing, touching; our chemistry was off the scale.

Sadly, so was the weight of our baggage.

Despite the bubbly sensation his kisses gave me, my chest felt heart attack victim tight and I wanted to smack him if only to get him talking. One of us had to be the grown up and put an end to the whole messed up romance.

As much as I knew that intellectually, my body wasn’t prepared to agree. My treacherous fingers gripped the front of Kai’s blue sweater like a baby with a security blanket, refusing to break contact.

Kai brushed his knuckles along my side. “I miss your curves,” he murmured, his lips at my throat.

Over the past few months, I had become a lean, mean fighting machine. My best friend Theo, a.k.a. Prometheus, had me on a crazy training regimen to build up my stamina and strength in preparation for my final showdown with Zeus and Hades.

Which was next Thursday.

Exactly one week from today.

And speaking of said battle …

The fate of the world rested on Kai’s and my shoulders, and right now, that was a very unstable place to be. “We can’t keep doing …” My voice rose an octave as he nipped at my happy spot in the hollow of my neck. “… this.”

I pushed him away, placing my hand on his chest to keep him at arm’s length.

Kai shot me a look of pure sorrow. “I know,” he said, his voice full of misery. There was a brief pause during which neither of us moved. A pause which would have been the perfect moment to finally—after all the kissing, avoidance, and waaay more kissing—talk about the Persephone-shaped elephant of betrayal in the room.

My friend Hephaestus, better known as Festos had returned. His cheerful voice drifted into the guest bedroom of his apartment located in the industrial area in Seattle, where I’d been living for the past couple months. After Bethany had left me stabbed and bleeding on the ground in my school parking lot on that awful night, when Festos had kindly taken me in to heal.

And then kept me because I had nowhere else to go. I couldn’t return to school, and not because of Bethany. No, my adoptive, drunk, socialite mother Felicia—a.k.a. Demeter—had made sure to burn that bridge for me but good. She’d wanted me out from under the safety of the wards at the school and back in her clutches.

Guess she’d planned on “convincing” me to honor the original deal between her and Persephone which would let Demeter rule Olympus, after Persephone and Kai took down their fathers on the spring equinox.

The House That Was Eureka by Nadia Wheatley
Beyond Lion Rock: The Story of Cathay Pacific Airways by Young, Gavin
The Forgotten Cottage by Helen Phifer
Kaleidoscope (Faylinn Series) by Hayes, Mindy
Nearly Broken by Devon Ashley
Tales from the Hood by Buckley, Michael
Poisoned (The Alex Harris Mystery Series) by Macko, Elaine
Some Deaths Before Dying by Peter Dickinson
Aurora by Joan Smith
The Forbidden Lady by Kerrelyn Sparks