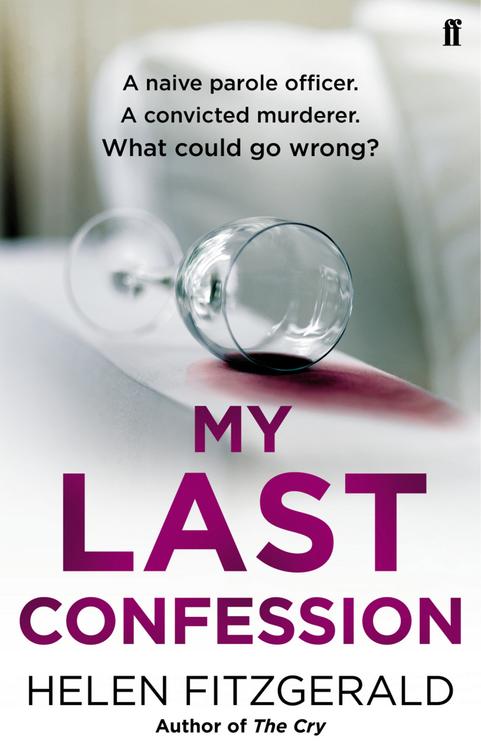 Thanks to my editor Helen Francis,
to my agent Adrian Weston,
and to my two forever friends who are even better
than full-bodied Australian red

3 Don’t French-kiss a colleague to get your boyfriend jealous.

5 Don’t spend more time with murderers than with your son.

Maybe if they’d had some kind of induction then my wedding day would have been the most wonderful day of my life. I would have beamed in my mermaid sheath with floral-embroidered bust. Little Robbie would have walked in front of me in his Hunting Donald kilt,
mini-sporran,
maxi-smile, his hair lacquered, Fifties-style, his battery-operated diesel engine whirring in his shirt
pocket.
He might have thrown rose petals on our friends and families and said ‘shite’ very loudly as I had accidentally taught him to do. And Chas would have lifted the veil from my face and kissed me on the lips, making me the happiest bride in the history of brides.

I should have watched dewy-eyed as Chas made a toast to us and a speech. Instead, someone pinned me down and I clawed at the dark like Clarice Starling.

I should have waltzed with Chas. Instead, I had to watch his life slipping away while I screamed for
someone
to call an ambulance, please …
please
…

I should have sipped champagne. Instead I sobbed with terror.

It was all my fault. Because in my first month in the job I was stupid enough to do all those things a parole officer should never do.

In the two years before I became a parole officer I’d made a lot of changes in my life. I’d given up work to
concentrate
on bringing up my baby, Robbie. I’d watched him learn how to crawl then walk then talk then body-slam my boyfriend Chas till the two of them were sore with laughter. Most of all, I had dived headfirst into the realm of the loved.

I let myself drink a cup of coffee in bed each morning while Chas went back to sleep beside me. I enjoyed the time we spent holding the buggy handles together as we mooched around not-very-good shops. I took turns with Chas in pushing the swing at the park, making funny shapes with bubbles in the bath, reading stories, lying beside Robbie till he fell asleep.

And Chas and I touched. In fact we never stopped touching. I just couldn’t get enough of this person I’d held at a distance for so many years.

To start with, the three of us lived off the goodwill of my parents. In my hour of need one sunny September they emptied the essentials from my flat into their house and fluffed themselves up around me for as long as I needed. They encouraged routine, good food, exercise and fresh air. They discouraged drinking, impulsiveness,
self-hate and blame. My routine became the same as Robbie’s. After a good night’s sleep, I ate the spoonfuls of sustenance that Mum and Dad set before me. Mid-morning, I took slow, calm walks around the park. I slurped home-made soup for lunch, snoozed in the afternoon, went for a second stroll in the evening, ate a balanced dinner, had a bath some time later and then went to bed. It bored me stupid to start with. No alcohol, no partying, no friends, colleagues, worries and buzzes. Just the calming presence of Chas and my parents. But before long I began to redefine what I previously called boredom as relaxation and good health and realised that these things were gradually leading me towards happiness.

Chas started off by visiting, then staying over
occasionally
. He’d been released from prison a couple of years back, after assaulting a paedophile, who just happened to be the stepfather of my closest childhood friend, Sarah. For years this man had set about ruining the lives of
children
he had unsupervised access to. He’d almost ruined mine, and had succeeded spectacularly with Sarah. It was terrible in my eyes that Chas had been punished so severely.

After his release, Chas was paroled to his family home in Edinburgh. His parents were posh serious types who wanted Chas to turn his life around, get a sensible job and a different girlfriend. Ever the rebel, he continued to paint and commuted to my house as often as he could.

When Chas declared that he was no longer on parole and could therefore live wherever he wanted, I asked him to move in. He kissed his worried parents goodbye and arrived at the door with two large suitcases. Each morning after that, Chas would head off to the space he’d
rented at the sculpture studios in Hillfoot and spend his day painting from the sketches he’d made all over the world. He’d travelled for years after we shared a flat at Uni, sketching his way through latitudes, but after he came back, and we got together, he hid them from me. It was a surprise, he said. He’d show me if he ever had an exhibition.

It took time, but I was gradually coming to terms with the death of my best friend, Sarah. Her name always
followed
the word ‘poor’ in my mind. Poor Sarah had a terrible childhood. Poor Sarah couldn’t get pregnant. Poor Sarah was betrayed by her husband, Kyle, and her best friend – me.

After months of waking to a sick feeling in my tummy, with poor Sarah’s face hovering over my bed, I began to feel better. I felt I had everything a girl could possibly hope for:

A beautiful healthy three-year-old son who made up songs to the tune of the Teletubbies:

A loving partner who always had the time and energy to hold and comfort me; who knew how to change my negative thoughts to positive ones, my bad moods to good; who always had the right answer when I asked
him, sometimes in the middle of the night, if everything was going to be okay. ‘Yes, baby girl,’ he would reply. ‘Everything is perfect, because I love you more than
anything
in the world. I even love you more than pizza.’

I had two wonderful, generous parents who had put weekend getaways on hold and given over two of their precious bedrooms to help get me back on track.

And I had an immensely good haircut. After wearing it long and wavy for years, and mostly shoving it back in a ponytail to get it out of the way, one day when a
wonderful
feeling overtook the sickly one in my tummy, I decided it was time for layers. I called Jenny, hairdresser to the stars and me, and she layered it with glee till I looked glowingly thirty-five, and for days afterwards everyone stopped me to say how terrific I looked.

The haircut signalled the end of a phase in my life and the beginning of another. It was time to move back into my own flat, time to get a job. I was ready to get back out there, into the real world.

I think Mum and Dad were ready too. Mum missed her creative room, which had been taken over by
wooden
train tracks and a cot-bed, and Dad missed the spare bedroom Chas and I slept in, which he had used to decamp to when Mum got fidgety feet in the middle of the night.

I gave my tenants a month’s notice and we started packing up our gear and organising to get stuff out of storage.

With Chas no longer on parole, I decided to apply for a position in criminal justice. The job was very different from the child protection work I’d done for so long and
that had helped burn me to a cinder two years earlier – safer, somehow, because I would be following the orders of the court. I wouldn’t be taking people’s children away from them or accusing them of things. No, I would be part of the criminal justice system and therefore secure in the knowledge that my clients would not blame me, harm me or hate my guts. Also, a friend of mine had worked with offenders and said it was way more family-friendly than child protection. And I have to admit that the idea of talking to bad boys all day seemed as exciting as when I was a teenager.

One night after Robbie went to sleep, I filled out an application form for ‘Criminal Justice Social Worker’. I wrote a beautiful covering letter about being a team player, understanding the balance between care and control, having outstanding time-management skills and all the other crap they wanted to hear.

I posted it the next day.

Bread of the Dead: A Santa Fe Cafe Mystery by Ann Myers
The Clasp by Sloane Crosley
Ash & Bramble by Sarah Prineas
Realm Wraith by Briar, T. R.
Forged by Fire by Janine Cross
Lucky: The Irish MC by West, Heather
V.J. Chambers - Jason&Azazel Apocalypse 01 by The Stillness in the Air
Fiend by Peter Stenson
Death of a Commuter by Bruce, Leo
The Pledge by Helen Mittermeyer