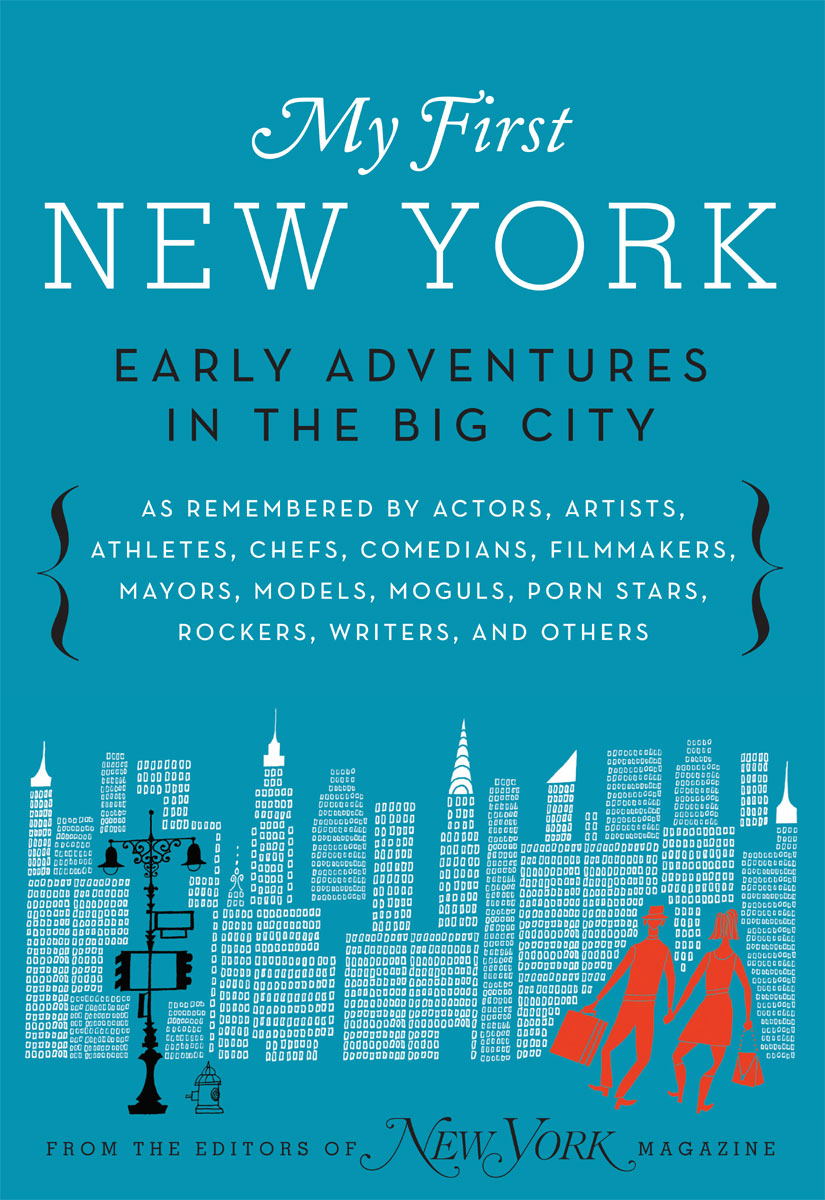 Early Adventures in the Big City

As Remembered by Actors, Artists,

Rockers, Writers, and Others

I came into New York an emperor on a barge. It wasn't the skipper who was taking the boat in, but my will to conquer, and I was almost sorry for the New York that would have to yield so completely to my demands.

â
SINCLAIR LEWIS,
“THAT WAS NEW YORKâAND THAT WAS ME” (1903)

This book started out as a magazine feature that, like the city it celebrated, soon grew a bit crowded for its size. In April of 2009,
New York
magazine published a cover story in which thirty local notables recounted their first New York experience. These true talesâcomic, clueless, heartwarming, and unusually candidâhad struck a chord in the office as they were filed. But the response they received upon publication, and the outpouring of readers' own stories at nymag.com, made us realize we were onto something deeper than a collection of newbie anecdotes, however memorable: that one's arrival in this city was a memory as primal, potent, and private (yet begging to be shared) as that other First Time. So we decided to widen the net. The result,
My First New York,
expands some of the stories
that ran in the magazine, and adds many, many more New Yorkers willing to tell their tale.

For this book, a few of the writers wrote, the restâa mix of actors, artists, comedians, entrepreneurs, filmmakers, journalists, musicians, politicians, sports stars, and othersâtalked. For all of them, recounting their first adventures in New York seemed to bring out their truest selves: Liz Smith gossiped while Liza Minnelli gushed; Yogi Berra kept it very, very simple. And they went about moving in very different ways: some, like actress Lauren Hutton, came on a glorious impulse; some (or at least blog magnate Nick Denton) made a detailed spreadsheet that assigned weighted scores to various cities, and then fiddled with the calculations until New York came up the winner. Few have arrived with less than filmmaker Jonas Mekas, a concentration-camp survivor on a UN refugee ship; few have swanned in with more than Diane von Furstenberg, a
princess
. An extraordinary number managed to land in New York just as something historic was happeningâbut then again, something historic happens here a lot. Cindy Sherman arrived in the middle of the Summer of Sam; Danny Meyer came on the day John Lennon was shot.

Arranged chronologically, their stories combine into a subjective and impressionistic history of our city, one that captures its changing temper and tone since the Great Depression. Through the arrivals' wide eyes, we watch New York's transformation from the land of jazz clubs and the World's Fair to a seething pit where college faculty revolted alongside students and empty lofts awaited colonization, to the kind of place where dot-com millionaires took cooking lessons and you needed serious connections to snag a job at a video store. They tell of a city that seesawed from safe to dangerous and backâand then dangerous again, but in a different way. And together they make an accidental encyclopedia of New York hot spots through the ages, because that's where the newcomers in search of their crowd inevitably gravitate: from the Cedar Tavern and the Gaslight to LutÃ¨ce and Elaine's, from Max's Kansas City and the Mudd Club to the Odeon and Bungalow 8, they're all here, dots on the unbroken line of the Next Next Things.

A recent survey found that more than half of all New Yorkers have moved here from somewhere else. And,
in fact, the city is a magnet that attracts in times good and bad. Roughly the same number of foreign immigrants (about 750,000) moved to New York during the 1970s downturn as during the boom years that just ended. It is also a bit of a sieve: even as the city serves as a mere gateway to America to millions of immigrants, there is always the subset who look up and realize that moving any farther would be redundant at best. They are joined by about eighty thousand Americans who arrive each year from elsewhere in the country. As it is often said, what makes one a real New Yorker is the conscious decision to become one.

“It's one thing to become a New Yorker,” notes Keith Hernandez, who was traded to the Mets midseason in 1983. “It's so much weirder to become a New Yorker that all the other New Yorkers know.” It is true that an inordinate percentage of people in this book are in the second camp: they have won the lottery, conquered the city in one way or another. For some, the red carpet was laid out at once (Naomi Campbell's account begins with the words “At sixteen years old, I was summoned by Anna Wintour”). For others, it unspooled through roach-infested illegal sublets and late night commutes back to Jersey.

There is one chronicler here who you certainly will not have heard ofâyet. As part of the feature that ran in the magazine, we put a call out to readers to find the city's most recent arrivals. We heard from hundreds of brand-new New Yorkers, and chose oneâJenny Joslinâto complete the collection. She's twenty-three years old, hails from Texas, and aspires to be an actress. The direction of Joslin's career remains to be seen, but like the others in the book, success is, weirdly enough, beside the point. What you are holding is a collection of fifty-six testaments to a larger revelation, one that arrivals of all stripes and all eras have experienced again and again, regardless of how the city proceeds to treat them. It is something songwriter Rufus Wainwright terms “having cracked the code of living life to the fullest.” Becoming a New Yorker is a bit of a victory in itself, and so every story in this book has a happy ending by default. It comes with the territory.

I
was born and raised during my early years in Trenton, New Jersey. But when my parents separated, when I was six, I moved to Harlem with my mother. Governor Roosevelt had just become President Roosevelt. We had the Great Depression, of course, but the Harlem Renaissance still had some life in it. Seventh Avenue was a boulevard in those days, and every Easter,
everyone would march up and down it in their finery. I remember when Joe Louis was winning fights and people would open their windows and share the radios they had. I didn't see more joy and pride until, well, until those same streets and fire escapes were filled with cheers on election night 2008.

We moved a lot. The joke was that we moved when the rent was due. My mother and grandmother both worked as domestics, each making a dollar a day. But I made some money, too. I'd go to 125th and Eighth, where all the pushcarts were selling groceries. I bought shopping bags, three for a nickel, and I sold them at two cents apiece. I would save up and buy my mother something nice from the five-and-dime store.

I wasn't always such a good little boy. I had a skater scooterâa soapbox and a two-by-four with roller skates on the bottom. Most kids decorated their skater scooters with bottle caps from soda bottles. But if you were really cool you had reflectors. Thing was, you couldn't just buy a reflector; you had to liberate them from cars. So I was out there liberating with my friends, and a police officer caught me because I was the littlest in the group. And he brought me home
and told my mother and grandmother that their good little boy had done this. It was a total shock to them. Now, heretofore, all they had to do was give me a look of disappointment, and I'd be crying in thirty seconds. But now we were living in this city, and things were changing. They stripped me bare, stood me up in the bathtub, and hit me good with some leather straps. I never did anything bad again.

I
was born in Paris and grew up on the West Coast, but at nine years old, I came to conduct an orchestra for the New York World's Fair. It made a mark. The
New York Times
picked up the story, and when Mayor La Guardia heard that there was a child conducting an orchestra, he called me into his office in one of the pavilions. We had a conversation, and there's a little picture in the ar
chives of me, my finger up, expounding on something, telling the mayor how to run the city.

Years later, when our family had moved to Pittsburgh, I would come to New York. I would perform a Friday-evening concert in Pittsburgh, and then I would drive that night to the Big Apple in a DeSoto that I had picked up in some used-car lot. I'd have all day in the city on Saturday, and then I'd get up at five in the morning to drive back in time for the three o'clock Sunday concert. I went to nightclubs, museums, Central Park. If I had a girlfriend, I'd take her to the movies. We never had any money, even for gasoline, so sometimes my buddy and I would take our fiddles to a nightclub where they would give us a meal or a little bit of money if we played tunes for the customers. We'd play Cole Porter and George Gershwin, and also a bit of Mozart or BartÃ³kâpieces written for two violins. If we got too classical, however, the proprietor would come by and start frowning at us until we broke into some well-known tune of the day.