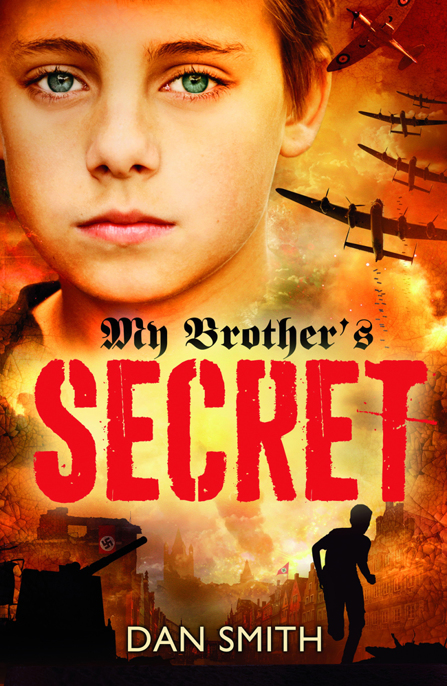 From the Chicken House

Brothers often fight – and feel that parents just don’t understand or take unfair sides. But when taking sides becomes a matter of life and death, then the brothers in Dan Smith’s war-time Germany have to make some tough decisions together. Based on real Second World War events, this brilliant story gives a feeling of what life was like when children were faced with real evil and conflict. Fighting for our freedom – who knows if it may be something we have to choose again one day!

Words On The Wall

Wolff In The House

Wolff At The Door

A Change Of Plan

Surprise In The Cemetery

In The Wolff’s Lair

Death In The Cemetery

A Knock At The Door

About the Edelweiss Pirates

For Mike – my own big brother

‘I want a brutal, domineering,
fearless, cruel youth.
There must be nothing weak
and gentle about it.’ 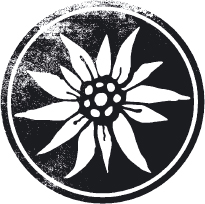 W
e were the only ones left alive.

We were lying in the shaded undergrowth at the edge of the woods, watching a small stone bunker at the opposite end of the clearing. Guarded by a group of uniformed boys, the derelict, grey building wasn’t much to look at, but it was our target; it was the difference between winning and losing. Every single one of the boys lying dead around us had lost their life either defending it or trying to take it.

Martin grinned at me and his teeth flashed white
against his dirty face. ‘It’ll be easy.’ He was broad and strong – one of our best soldiers. Back there in the woods, he’d lifted a boy right off his feet and thrown him down like a sack of potatoes before taking his life.

‘But we can’t just go running out there,’ I said. ‘What if there’re others? What if they’re waiting for us in—’

‘You worry too much.’ Ralf nudged Martin and nodded, then the two of them stood and began moving back into the cover of the trees. ‘We’ll distract them; you take the target. Divide and conquer. The only thing that matters is winning.’

‘Just make sure you take the target,’ Ralf whispered as they disappeared into the forest. ‘And don’t die – because if you do, I’ll kill you.’

It wasn’t long before Ralf and Martin broke from the trees at the far right of the clearing. They came out running, and as soon as the guards at the bunker spotted them, two boys rushed down to challenge them.

Two more boys remained outside the bunker, standing beside the flagpole, scanning the treeline for other attacks. The last boy was still inside and I knew he would be watching, too.

I squeezed my hands into fists, fingernails digging into my palms.
Wait a little longer
.

The two boys who had gone out to meet Ralf and Martin, sprinted across the field, giving chase as my friends turned to run, luring them further away from the bunker. Close to the line of the trees, though, Martin
stopped and turned. He lowered his head and rammed his shoulder into the first attacker. The boy went up in the air, over Martin’s back, and landed in a heap on the grass. Ralf crouched, hit the fallen boy once, then tore his life away as Martin faced the second who slowed and put up his hands, ready to fight. Martin shook his head at him and slammed a fist into his stomach, knocking him flat on his back. He leaned down to tear away the boy’s life, then raised a hand to Ralf. ‘You ready?’ he called.

‘Ready,’ Ralf replied, and the two of them began walking towards the bunker.

Divide and conquer
. Now I understood. With two boys down, and only three left, we would take the target with ease. We had won.

Ralf and Martin were halfway across the clearing, fifty metres from the bunker, when I decided to leave my position. Before I could stand, though, I saw that we had underestimated the enemy.

They had a plan too.

Without warning, a unit of ten boys emerged from the woods on the opposite side of the clearing. They came fast, shouting and whooping like devils, and Martin and Ralf stopped, jerking their heads round to see the new attackers. Their bodies tensed as if their first instinct was to run, but they looked at one another, nodded, and turned to face them.

When the enemy force reached them, Martin was the first to wade in. He windmilled his fists, thumping anything that came close. He smashed noses and cracked jaws, and within seconds, three of the enemy lay flat on
their backs. Ralf followed in his wake, bending to rip away the lives of the fallen boys. They took down the enemy group like perfect soldiers.

Watching from the bunker, the guards grew more and more agitated. The bigger of the two gestured at the ongoing battle, while the other shook his head and grabbed the first by the front of his shirt, trying to hold him back. The big guard pushed his comrade away, though, leaving his post and rushing down into the battle. Heading downhill, he picked up speed and crashed into Ralf from behind, knocking him off his feet, sending him flying into the mass of bodies.

I watched in horror as the enemy boy stooped to rip away Ralf’s life.

I looked over at the bunker. Just one guard still outside, one inside.

You have to go now
.

I jumped to my feet and broke from cover, tearing out into the sunshine. The remaining boys circled Martin like wolves. At the bunker, the guard was watching the battle. He hadn’t noticed me.

My chest was tight with exhaustion and my legs were burning.

‘Go on, Karl,’ someone whispered as I ran past the bodies of my fallen comrades. ‘You can do it.’

Martin was still flailing his fists, but he was weakening too, and the circle was tightening around him.

‘Win, Karl, win,’ another boy said as I came closer to
the target.

Ten metres from the bunker, the guard inside the building spotted me. His pale face appeared at the window and his eyes met mine, but he didn’t react; he just watched me approach as if he didn’t care.

The guard outside only saw me coming when I was just a few paces away; but he was too late. I was on him.

I swung my fist as if I were swinging a hammer, and the blow caught him on the side of the face, connecting with a solid thump that knocked him sideways. He collapsed in the grass without a sound and I ripped away his life before standing to face the final guard who had left the darkness of the small building and come out to meet me.

In the clearing, the enemy boys closed in on Martin and overwhelmed him, forcing him down and taking his life; but they hadn’t seen my attack.

I gritted my teeth and took a step towards the final guard who had emerged from the bunker.

His shoulders were slumped and his eyes were red as if something had irritated them. He didn’t seem to focus on me properly and stood motionless as I took another step closer and put up my fists.

The boy flinched, but did nothing to protect himself. I ripped away his life and pushed him to the ground, then turned to the pole and began raising the flag.

I looked up at the colours of the flag against the blue, cloudless sky. Red, as bright as the blood we had spilled that afternoon. A white circle, so clean and crisp, and the bold, black swastika at the centre of it.

A single, ear-splitting blast from a siren pierced the air, signalling the end of the game, then the clearing was filled with the sound of cheering.

‘Heil Hitler,’ said a voice behind me and I turned to see the area leader coming towards me. Flanked by two Hitler Youth squad leaders, he had been watching the game from a vantage point at the back of the clearing. He stopped in front of me and looked down, tucking the thumb of his right hand into his belt. He was tall and strong with a square chin and a serious look in his pale eyes. His uniform was perfect in every way, his cap set just right.

‘You did well,’ he said to me. ‘You’ll make a good soldier.
As fast as a greyhound, as tough as leather and as hard as Krupp’s steel
. The words of the Führer himself.’

I put my feet together and raised my arm in front of me. ‘Heil Hitler.’

The other boys who had been lying dead in the field were on their feet now. Some groaned at their failure, others cheered our victory. They jumped up and down and hugged each other. Boys streamed out from the woods to see who had won, a few scuffles breaking out among them.

The boy at my feet sat up and watched me, biting down on his lip as if to hold back the tears. His name was Johann Weber, and he was in my class at school. He wasn’t one of my friends so I didn’t know him well, but something about him had looked different today. Usually he was quick and clever, and when he was boxing, he could
run rings around some of the bigger boys. I looked down at the red ribbon-of-life still tied around my right wrist, then at the blue ribbon I had just ripped from him, and wondered why he had given up so easily.

‘Just in time,’ the area leader said, glancing at his watch. ‘A few more minutes and you would have lost.’

‘How many did you get?’ He gestured at the blue ribbon in my hand.

I pulled a fistful of them from my pocket and counted. ‘Seven, sir.’

‘Seven kills? You even have blood on your face.’

‘Not mine, area leader.’

‘That’s good.’ A hint of a smile touched his lips and he nodded once at me. ‘Well done; you’re exactly the kind of German we need in our army. Hitler would be proud of you. How old are you?’

‘And what is your name?’

Heart Of The Bear (Appalachian Shifters #1) by Alanis Knight
Return to Lone Oak (Harlequin Heartwarming) by Knupp, Amy
Sasha's Portrait by B. J. Wane
The Latchkey Kid by Helen Forrester
Haunted by Dorah L. Williams
Solomon's Throne by Jennings Wright
A Step Farther Out by Jerry Pournelle
Daughters of Castle Deverill by Santa Montefiore
Looking for Alaska by Green, John
The Accidental Species: Misunderstandings of Human Evolution by Henry Gee