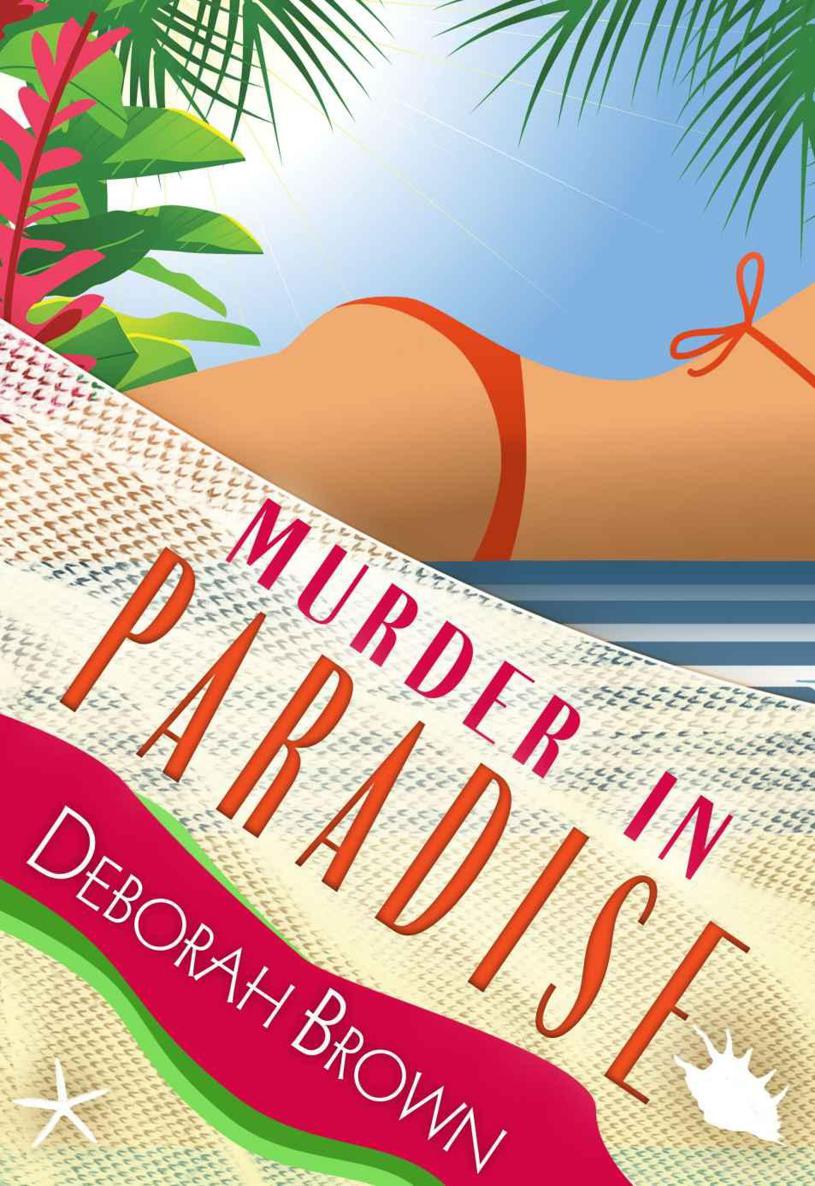 This book is a work of fiction. Names, characters, places and incidents are either the product of the author’s imagination or used fictitiously. Any resemblance to actual persons, living or dead, or to actual events or locales is entirely coincidental.

All rights reserved, including the right to reproduce this book or portions thereof, in any form. No part of this text may be reproduced, transmitted, downloaded, decompiled, reverse engineered, or stored in or introduced into any information storage and retrieval system, in any form or by any means, whether electronic or mechanical without the express written permission of the author. The scanning, uploading and distribution of this book via the Internet or via any other means without the permission of the publisher is illegal and punishable by law. Please purchase only authorized electronic editions and do not participate in or encourage electronic piracy of copyrighted, materials.

Excerpt from Greed in Paradise @2014 by Deborah Brown

A SPECIAL THANK YOU TO

Preview Of Greed In Paradise

Dark gray thunderclouds filled the sky, threatening to pour big fat raindrops at any second. With the mugginess stripped from the air, the temperature began to drop and streaks of lightning flashed to the west. I opened the back door of my Tahoe and put Mother’s birthday gift on the back seat. Creole, an unofficial cousin, had called in a favor and gotten me an invitation into Patron’s Cigar Factory, an appointment-only cigar bar where I scored a small handmade teak humidor filled with hand-rolled Cubans, the kind that Mother enjoyed.

Sliding into the driver’s side door of my Tahoe, I had one leg under the steering wheel when someone jerked me from my SUV.

I elbowed my assailant hard, making contact. He yelped, twisted me around by my hair, and tossed me airborne until I landed in the middle of the busy street. “Get up and I’ll shoot your ass,” he said as he pointed his gun at my face. He jumped behind the wheel, spinning the tires as he squealed off down the street.

A beat-up sedan honked furiously, screeching to a halt just inches before rolling over me. The driver put his car into gear to go around me and yelled from the passenger window, “What the hell’s the matter with you, lying in the street?”

Carjacked––and in broad daylight no less.

Sylvia, Patron’s wife, rushed out of the cigar bar. “Madison, are you okay? My daughter is calling 911.” Her big brown eyes checked me over.

“I’m fine. I need to place another order.” I’d waited six months for the humidor I picked to come in, and now I refused to be empty-handed.

“You’re a good daughter,” Sylvia said. “The best birthday gift for your mother is that you’re not hurt.”

A Miami police car flew up the street, lights flashing. If this had to happen, it would’ve been nice to have been closer to home where I knew the sheriffs on a first name basis, for a variety of reasons, both good and bad. The officer climbed out of his patrol car.

“You the one who got jacked?” he asked, as he pointed at me.

“Come back inside when you’re done here,” Sylvia said.

The officer’s name tag read, “Durango.” I gave him the straight facts, veering away from the tabloid-style I enjoyed when relating details to friends. I knew when not to overplay the drama.

“Here’s my card. I wrote the report number on the back for your insurance company.” Durango looked bored. “If––when––we find your vehicle, you’ll get a call from the tow yard. Cancel your cell phone and credit cards if they were left inside.”

Standing in Little Havana, reality set in that I was an hour away from home and I knew no one. I had no ride, no money, no phone. Mother’s birthday party started in less than two hours and I needed a stand-in to handle the last minute details. I also needed someone to break it to Mother that I’d be lucky to get there before her party ended.

I went back inside Patron’s and asked Sylvia if I could use their phone. The aroma of tobacco from the open boxes displayed filled the air. The family-run business specialized in cigars rolled on site.

“This is Madison Westin. Tell your boss it’s urgent.” It could be loosely said that I work for Brick Famosa, trying to get hours for my PI license. He calls me when there isn’t another person in town who will accept the job. At least tracking down a missing urn of ashes didn’t land me in jail.

“Red, you in trouble?” He gave me that nickname because I have red curly hair, and lots of it.

“I got carjacked. I need one of your rentals; my insurance will cover the cost.” He owned the largest high-end car lot in South Miami.

“Did you shoot him?”

I knew Brick would be disappointed with my answer. If he had his way, the bad guy would wind up dead every time. “He grabbed me from behind. My gun was the only thing he didn’t steal.” I reassured myself by touching the holster at the small of my back.

“I’m on my way out. You can choose any rental on the lot—Bits will give you the key.” Bitsy was a former employee at Brick’s gentlemen’s club whom he’d promoted from stripper to receptionist. The customers at Famosa Motors loved her bubbly personality and ginormous assets.

“Don’t hang up,” I said. Brick had a tendency to be abrupt when ending calls. “I need a ride from Patron’s to Famosa’s along with one of your phones.” He ordered phones by the case, along with phone cards.

“Your ride’s on the way. When you’re done, take the SIM card out and throw the card and phone away.” He clicked off, not giving me an opportunity for another word. Pure Brick!

Brick had been named Cuban entrepreneur of the year. In addition to the car lot, he owns The Gentlemen’s Club out in Alligator Alley, a string of pawnshops, a bail bonds place by the courthouse, and he’s a private investigator.

Fabiana Merceau, my best friend and roommate, would be annoyed that my next call wasn’t to her, but I knew she was spending the day with her underwear model boyfriend, Didier. To put it bluntly, she lacked hostess skills.

I dialed my brother Brad, instead. “I need a favor,” I said when he answered. “Are you with Julie?” Julie, my brother’s girlfriend, was the perfect choice to attend to last minute details for the party. “First off, I’m okay.”

“What the hell does that mean?”

“I got carjacked. A rental car is on the way. I need you and Julie to see to the last minute details of Mother’s party. Cook knows what I have planned and everything is ready, except for last minute stuff like ice. You need to open up Jake’s, turn on the lights, and put out the ‘Closed for Private Party’ sign.” I didn’t give Brad a chance to interrupt.

“You better be okay.”

“You’re the best brother ever. One more thing, I need you to tell Mother I’m going to be late and why. I’m borrowing a cell phone so pick up your calls and I can let you know when I’m on my way.”

“You’re bratty,” he snorted. “Any problems, you call me.”

Sylvia held a Patron’s shopping bag out to me when I was done with my phone call. “Your Mother will love this. It’s a small personal humidor that holds a half-dozen of her favorite cigars.”

“I’ll send you a check.” I almost started to cry.

“It’s the least we can do since this horrible thing happened in front of our store.” Sylvia patted my shoulder.

“I’ll tell Mother it’s from the both of us and she’ll love it even more.”

A black Land Cruiser pulled up to the curb. The window rolled down and I could see Gunz sitting behind the wheel. “Get in, crazy,” he called out to me. “Brick sent me. He owes me, and so do you.” After I slid into the passenger seat he handed me a phone and an envelope with cash in it.

Gunz, short for Theodore Gunzelman, is big-boy material, dressed in all black that’s an enigma I hadn’t begun to understand. If one needed a new identity, he’d be your first call. He stopped painting his bald head with fake hair paint, which was a big improvement.

“What the heck happened to you?” I asked, since there was tape across his nose from one side of his face to the other.

“I had to have a little cut-and-paste on my nostril.” Gunz shook his head. “Mango and I got into a disagreement, and her tooth got lodged in my nose.”

“Stripper chick from The Gentlemen’s Club; she’s a little excitable,” he sighed. “They were able to extract her tooth, but the dentist said it wasn’t reusable.”

Gunz turned into Famosa Motors. “So, which car are you taking?” he asked.

“Brick said I could have my pick. Thanks for the ride.” I climbed out and looked around. I saw the SUV I wanted and went in to get the keys from Bitsy. I slipped behind the wheel of the black convertible Hummer knowing full well my insurance wouldn’t cover it, but thought that maybe I could work a deal on the difference with Brick.

Getting carjacked forced me to stop at home to shower and change. I couldn’t show up to a party with dried blood on my arms and legs, not to mention the little pieces of gravel that embedded themselves into my skin from the pitch and roll. After going through my closet I chose a black lacey push-up bra and spaghetti strap dress. My first dress choice lay on the floor, a large unrepairable hole along one side. Since one of the heels had snapped off my shoe, I opted for a pair of black wedge designer flip-flops.

I inventoried the cars in the parking lot of Jake’s and determined I was the last to arrive. Jake’s, my favorite sports tiki bar, was under new management. Jake, one step ahead of heavy hitter collectors, had transferred his entire interest to me for safekeeping. Word had it they wanted their money, or him dead. I hadn’t made any major changes to the exterior, but I hired a contractor to make long-needed repairs and to add more outdoor lighting. All the palm trees were wrapped in lights with colorful annuals planted at the base of each.

As soon as I put the Hummer in park, the door handle jerked open and I screamed. “How did you know it was me?” I grabbed Zach’s head and curled my hands in his thick black hair. Bringing his mouth to mine, I met him with a hard, hungry kiss.