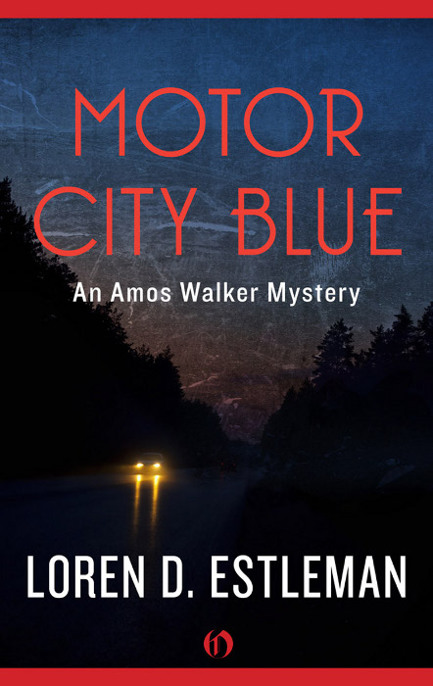 A Biography of Loren Estleman

F
ACES FROM THE PAST
are best left there. If, two hundred odd pages from now, you agree with me, this will all be worthwhile.

My lesson began while I was setting fire, or rather trying to set fire, to a Winston in just about the only place where it’s still legal to do so, a public street corner. Specifically, it was the corner of Watson and Woodward, and a November gale was whistling toward Lake St. Clair that was just a couple of knots shy of the one that washed Superior over the
Edmund Fitzgerald
four years ago. I tugged down my hat to keep it from bouncing clear to Grosse Pointe, where it had no business being, swung my back into the wind, and was coaxing a steady flame out of my third match when the man to whom the aforementioned face belonged stepped out through the doorway in which I was huddled, bumped into me, and knocked the match out of my hand into the slush at my feet.

Back some more. For three weeks now I had been an employee of the Midwest Confidential Life, Automobile & Casualty Company in the capacity of investigator, which is my life’s calling. Off and on for that same period I had been watching the man who lived on the second floor of the establishment on the opposite corner. This was a homely, soot-darkened building erected about the time Detroit was beginning to make something out of an adolescent auto industry, a crumbling structure that had somehow managed to retain its dignity in spite of the deterioration of the surrounding neighborhood and the garish legend on the marquee of the five-year-old movie theater on its ground floor:
24-HOUR ALL-MALE SEX SHOW. UNDER 18 NOT ADMITTED.
Before that it had been a massage parlor and before that a flophouse, the natural fate in this town for a hotel that had begun its existence catering to the millionaires of another era. The gentleman in the apartment above the theater had filed suit against a client of Midwest Confidential’s for injuries sustained in a fall which, he claimed, left him unable to walk without the aid of canes and a pair of steel braces on his calves. Medical tests having proved inconclusive, and it being company policy to investigate all claims, it fell to me to get the goods on the plaintiff, assuming that there were goods to be got.

The brand name was patience. Sometimes on foot, sometimes parked across the street in my heap, I had shot most of November keeping an eye on George Gibson’s comings and goings in the hopes of catching him without those canes. In my pocket was a Kodak Instamatic 20, the best thing modern technology has come up with since the telephone tap, to record the event when and if it occurred. The Nikon in my car was a more reliable piece of equipment, but it wasn’t as easy to conceal on my person, and I’ll sacrifice quality any time if reaching for it might cost my cover.

Dry, grainy snow—the kind that usually falls in the city—heaped the sills of unused doorways and lined the gutters in narrow ribbons, where the wind caught and swept it winding like white snakes across the pavement, picking up crumples of muddy newspaper and old election campaign leaflets and empty condom wrappers and broken Styrofoam cups as it went, rattling them against the pitted sides of abandoned cars shunted up to the curb; weathering the corners off ancient buildings with bright-colored signs advertising various hetero- and homosexual entertainments; banging loose boards nailed over the windows of gutted stores defiled with skulls and crossbones and spray-painted graffiti identifying them as street-gang hangouts, Keep Out; buckling a billboard atop a brownstone two blocks south upon which a gaggle of grinning citizens gathered at the base of the Renaissance Center, near where its first suicide landed, urged me in letters a foot high to Take Another Look at Detroit. The air was as bitter as a stiffed hooker and smelled of auto exhaust.

I was prepared, when the match was jostled from my grip, to defend myself against the usual cluster of lean young blacks policing their turf, but was surprised when I swung around to find myself facing a well-fed Nordic type with gray eyes and blond hair wisping out from beneath the fake fur rim of an astrakhan-style hat. I was doubly surprised when, half a beat later, I recognized him.

It wasn’t mutual. Scarcely glancing at me, he muttered a terse apology and pushed past, heading south in stiff, hurried strides. I watched his retreating back for a long moment, then, decisively, snapped away my cigarette, which I had nearly bitten through upon collision, and began following him. It didn’t look as if Gibson was coming out again today, and the coincidence of literally bumping into someone I had last seen seven years ago in another hemisphere set my curiosity ticking.

Wherever he was going, he was either already late or didn’t want to be. Twice more he came close to running into pedestrians as he threaded his way through the sidewalk traffic, eyes skimming the street in search of a cab, and once he was forced to do a wild Charleston to keep from falling when he slipped on an icy patch. Not that the narrow escapes made him any more cautious. If anything, he stepped up his pace as if to make up for the lost time. I followed at what the spy novelists call a discreet distance, which means I almost broke my own neck trying to keep him in sight.

I’d be younger now if he’d caught that cab. Then I would have lost him and gone home and maybe read about him in the papers later and sat there reminiscing for a few minutes, and that would have been the end of it. I was to wish that he had, before much more time had passed. But there were no cabs in sight, and I’ll always blame Checker for everything that happened afterward.

I tailed him to Adelaide—scene of crusading reporter Jerry Buckley’s gangland-style execution in 1930—where he finally spotted one of the yellow cabs and was stepping out to flag it down when a blue Nova that I hadn’t noticed pulled over from Woodward’s outside lane to box him in between two parked cars. He hesitated a moment, then, cursing, reversed directions and started to hasten around one of the cars when a man on the passenger’s side of the offending vehicle climbed out and called his name. The nasal voice was pure Rhett Butler.

At the sound of his name, my quarry stopped and turned. This gave the man who had been driving the Nova time to circle the parked car and approach him from behind. This one and his companion looked enough alike to be brothers. Beefy and nose-heavy, they both wore dark suits beneath gray topcoats with black ties and slicked their longish, dirty blond hair back greaser-style, the way a lot of them still do down south. The driver was larger and older, but aside from that they could have been twins.

A low conversation ensued, during which I stepped into a doorway—force of habit—and pretended to be using its shelter to fire up a fresh fag while I watched. As I did so, a young, well-dressed woman who happened to be passing turned to give me the evil eye. I got it going and grinned at her through the smoke.

“Don’t get the wrong impression,” I said brightly. “It’s marijuana.” That didn’t set any better with her. She kept moving.

I wasn’t able to hear what the three were saying, but it was pretty obvious by their tones and gestures that my old acquaintance was burned about something and the others were trying to mollify him. After a few seconds of this the younger of the two rednecks placed a hand on the third man’s arm as if to escort him to the car. The latter appeared to go along willingly. That’s how it appeared. I’d been an MP for three years and I knew better. I recognized a no-resistance hold when I saw one; with that grip on his elbow it was either move or learn to get along with a stiff arm the rest of his life. The driver had an identical grasp on its mate. Together they led him to the car like a whipped spaniel.

At the last moment, when the back door was open and they were putting him inside, the younger of the abductors let slide his grip and their prisoner started to struggle, but the former put a stop to that in a hurry with a short, well-aimed jab just below the ribcage. It was an immobilizing blow. The captive stiffened and the two folded him into the seat and the younger man climbed in beside him and pulled shut the door in less time than it takes to tell it. Then his companion walked back around to the driver’s side, slid in behind the wheel, and drove off south without so much as a chirp of rubber on the windswept asphalt.

It was a honey of a snatch. If you weren’t watching closely it was just another car pool picking up a passenger on the way home from work. I probably drew more attention standing there in the middle of the sidewalk scribbling down the license plate number in my dog-eared pocket notebook than did the incident itself, which may or may not be a commentary on the attitude Detroiters have toward crime, depending upon whether you’re working for the newspapers or the mayor.

I looked around for a cab, but I needn’t mention what came of that. Then I made my way to the nearest public telephone, which wasn’t near enough, and punched the right sequence of buttons to connect me with police headquarters. That beat hell out of the physical labor involved in spinning an old-fashioned dial. I asked for Lieutenant John Alderdyce, and after I had repeated the request for the benefit of a pair of hollow-voiced female receptionists, the lieutenant’s deep tones came onto the line.

“John, this is Amos Walker. I need a license plate number traced in a hurry.”

“Call the Secretary of State’s office.”

“I don’t know anyone there. That’s why I called you.’’

“Quit screwing around, John. I’m talking about life or death.” That sounded like the set-up line to an old joke. I tried again. No, there was only one way to say it. I sketched out what I had seen. There was a pause before he spoke. Talking to him on the telephone, you’d never guess he was black. He grew up on the middle-class West Side and was educated at the University of Michigan, where competition with white students left him with little of the relaxed drawl his parents’ generation brought north during World War II.

“Can you describe the victim?” he asked.

Flashes of Me by Cynthia Sax
Soul Resurrected (Sons of Wrath, #2) by Lake, Keri
The Delaware Canal by Marie Murphy Duess
A Dove of the East by Mark Helprin
Promise Me Forever by Lorraine Heath
How to Murder the Man of Your Dreams by Dorothy Cannell
Off the Record by Rose, Alison
Deep Deliverance: The Deep Series, Book 3 by Z.A. Maxfield
The Journey: Illustrated Edition (An Anna Kronberg Thriller) by Annelie Wendeberg
Demontech: Rally Point: 2 (Demontech Book 2) by David Sherman