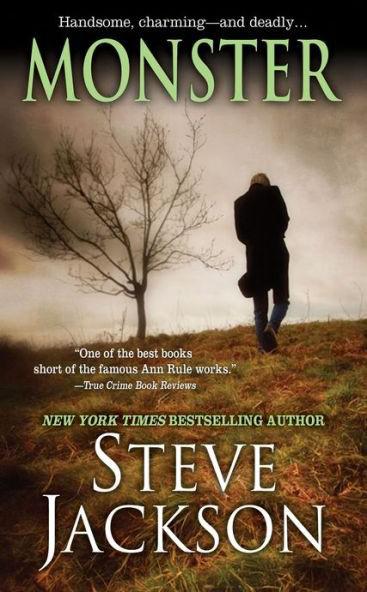 Some crime cases remain in our minds—and in our hearts—long after the jury has returned its verdict. With its shocking incidents of sex and violence, the case of convicted killer Tom Luther is one of the most compelling of all.

Handsome, polite, and charming, when he wanted to be, Luther seemed to have what it took to be a success. But something compelled him to prey upon vulnerable women. He left a trail of victims from Colorado to West Virginia, leading law enforcement—particularly, tenacious detective Scott Richardson—in a bloody game of cat and mouse.

In this newly updated edition of
Monster,
best-selling author Steve Jackson provides new information and insights on this case. Recently extradited from prison in West Virginia to serve his sentences in Colorado, Luther continues to cast a dark shadow over the friends and families of his victims. Yet, his story offers valuable lessons for all of us—about what makes violent predators tick, and what society can do to limit their relentless toll—while inspiring us with the courage, faith, and perseverance of the victims of his evil and those who pursued him.

Already hailed by experts, reviewers, and readers,
Monster
will enthrall and amaze you. Sit back and enjoy a fascinating story, told by one of America’s finest investigative journalists.

If you would like to comment on
Monster,
we’d love to hear from you at [email protected]

With my best wishes,

Lucky Lady: The World War II Heroics
of the USS Franklin and Santa Fe
To The Edge

March 28, 1993—Somewhere in the mountains west of Denver, Colorado

It was sometime after 2
A.M.
when the small car pulled into the gravel turnoff from the highway and rolled to a stop with its lights out. A dark figure emerged from the driver’s door, pausing a moment to make sure he was alone on the mountainside.

The night was bitterly cold, and the wind howled like wolves, rattling the tall dry grasses that poked through the snow. A stream rushed noisily over rock in the valley below, invigorated by the spring thaw.

Rock, bush, and tree cast black shadows in the moonlight, but no headlights appeared on the highway. Satisfied, the man opened the rear door and, leaning over, reached inside. Straining against the dead weight, he hauled the body of a young woman out and onto the ground.

Cher Elder lay unconscious and naked in the moonlight. He had beat her, punching her repeatedly in the face, and strangled her to the point of nearly passing out before he raped her. Then he fractured her skull with a blow from behind.

It had been a mistake to go anywhere with this man. But Cher, a pretty 20-year-old whose schoolbooks were laid out neatly at home for a future she would never see, was a friendly young woman, always laughing, trusting. She’d had no reason to fear him, until it was too late—when he changed into a monster.

The man reached back into the car and removed something small and dark from under the front seat and put it in his pocket. Then he half-dragged, half-carried Cher to a place out of sight from the road. As she lay helpless, he pulled the gun from his pocket and pressed it against her head, just above and behind her left ear. Three quick shots echoed briefly off the surrounding hills, then were swallowed by the wind.

The man thought for a moment, looking down at the body as dark blood seeped into the ground beneath her head. Crouching, he picked up Cher’s hand and tugged a ring from her lifeless finger.

Scott Richardson reluctantly climbed off his Harley-Davidson. It was days like this when all he wanted was to head the bike up one of the mountain passes west of Denver and ride. Forget the crimes and the tragedies, and clear his mind in the fresh air and sunshine as he leaned into each curve and opened up the throttle on the straightaways.

But duty called, so he turned and walked into the Lakewood city building, down the stairs and, after punching in a code number, through the police department’s security doors. He had just poured a cup of the bitter black brew that passed for coffee in the squad room when the detective division secretary, Donna, handed him a slip of paper. “Some guy named Tom Luther called, said he’s the one you’re looking for. Here’s his number.”

“Thanks, Donna,” Richardson said, taking the note. He was expecting the call—
has to be the mystery man in the videotape,
he thought—but he hadn’t known the man’s name, nor had he anticipated the call coming so soon.

Donna stood watching but was disappointed when Richardson turned away without further comment. Lean and handsome, despite the thinning of his coal black hair, the soft-spoken Texan wasn’t an imposing man physically, even though his fellow detectives kidded that his thick, Fu Manchu mustache made him look more like an outlaw biker than a cop. But it was his coffee-brown eyes that suspects found intimidating, especially when he was angry and they turned as dark as his mood.

His eyes were dark now. There was a girl missing, more than likely dead, from his adopted home of Lakewood, a bedroom community washed up against the Rocky Mountains due west of Denver. And this Tom Luther character had something to do with it, he thought. There had been too many false leads in his career, let alone this case, to get too excited, but Luther smelled like the real thing.

Richardson took a deep breath and let it go slowly to take the edge off as he walked back to his cubicle in the crowded office. He sat back in his chair and put his worn cowboy boots up on the desk to collect his thoughts before he called Mr. Luther.

As he did, he glanced up at the photograph of the dark-haired young woman he’d tacked to the wall. Cher Elder. The picture hung purposely near the photos of the five things he loved most in the world: his wife, Sabrina; his three-year-old twin sons, Brent and Brandon; hunting; and his Harley-Davidson softtail motorcycle. (“Not necessarily in that order,” Sabrina teased when she was in a good mood, a little more pointedly when ticked at him.)

Richardson’s gaze shifted to the photograph of Sabrina. A pretty woman. Blond, hazel eyes set in an oval face, and an east Texas drawl soft as a spring breeze off the prairie. They’d been together since she was a 13-year-old Texas rose and he a 17-year-old rebel just out of high school. They married five years later, in 1984, shortly after he’d been made a detective on the tiny Gladewater, Texas, police force—at 22, one of the youngest detectives in that state. She’d put up with a lot of crap ever since, including the long hours and fears that came with being a cop’s wife.

Working in the rough-and-ready oiltown of Gladewater in Gregg County, a swamp-covered hotbed for car thieves and drug dealers, he’d had his head busted open by a pool cue and come within millimeters of being shot a couple of times. But when he’d tried to quit police work for her sake, it was Sabrina who’d said, “You know you’re a cop, now get your butt back where you belong.”

They moved to Denver in 1985, and he joined the Lakewood Police Department. The twins were born in 1990. It was hard to believe that they’d been married now for nearly ten years.

Richardson looked back at the photograph of Cher Elder. It was a portrait shot taken shortly before she disappeared. She was smiling, and a hint of the mischievousness he’d been told about played at the corners of her mouth and in her green eyes. It was a nice picture of a nice girl. Twenty years old.

According to the dispatch report, Mr. Elder had contacted other family members and friends, including the girl’s boyfriend, one Byron Eerebout, after no one had seen her for several days. There was a possible siting at a local bingo hall the preceding Sunday, March 28, but nothing since. Earl was “very concerned as his daughter has never failed to return home, or be in contact with family,” the dispatch officer had written.

Richardson’s first impulse had been to let it slide. Chances were the so-called “missing person” was pissed off at her folks or her boyfriend and was getting even by sunning herself on a beach in Acapulco. Wait a week and, often as not, those cases resolved themselves with the subject turning up back at home.

Call it case management, but he had a whole stack of assaults and robberies that demanded his attention before he was going to leap too far into a missing person case. He had dropped the file back in the basket when his partner, Detective Mike Heylin, poked his face into his cubicle with an offer to go work out at a local gym.
It can wait,
Richardson told himself, grabbing his coat.

As he lifted weights at the gym, he’d tried to push the Cher Elder case out his mind, but something nagged at him. Nothing he could explain, but he had learned to trust his instincts. So much so that he mentioned the case to Heylin as they drove back to the department, something he normally wouldn’t have bothered with on such a trivial matter.

“To hell with it,” he muttered. “I oughta just let it sit. But as soon as I say that, sure as hell, it’ll turn into a homicide. Guess I’ll place a couple of calls.” Heylin just nodded. He knew that once a case started eating at his partner, there was no stopping him.

It was now April 20. Cher had been missing for three weeks, a long time to be sunning in Mexico.

Richardson customarily tacked the photographs of victims in his cases on the walls near those of his family. It was hard to think of someone as just another case if that person was smiling at him from the wall every morning when he came to work and every evening when he left. Particularly the homicides or, he corrected himself, the suspected homicides.

The photograph reminded him that Case No. 93-31067 was a girl whose family loved her every bit as much as he loved his boys. Cher’s family was suffering now, wondering what had become of her, blaming themselves, as families do, for something they had no control over. He suspected he couldn’t do anything for Cher, but it was his responsibility to bring her family some peace and, if she was indeed dead, her killer to justice.