Mistborn: The Hero of Ages 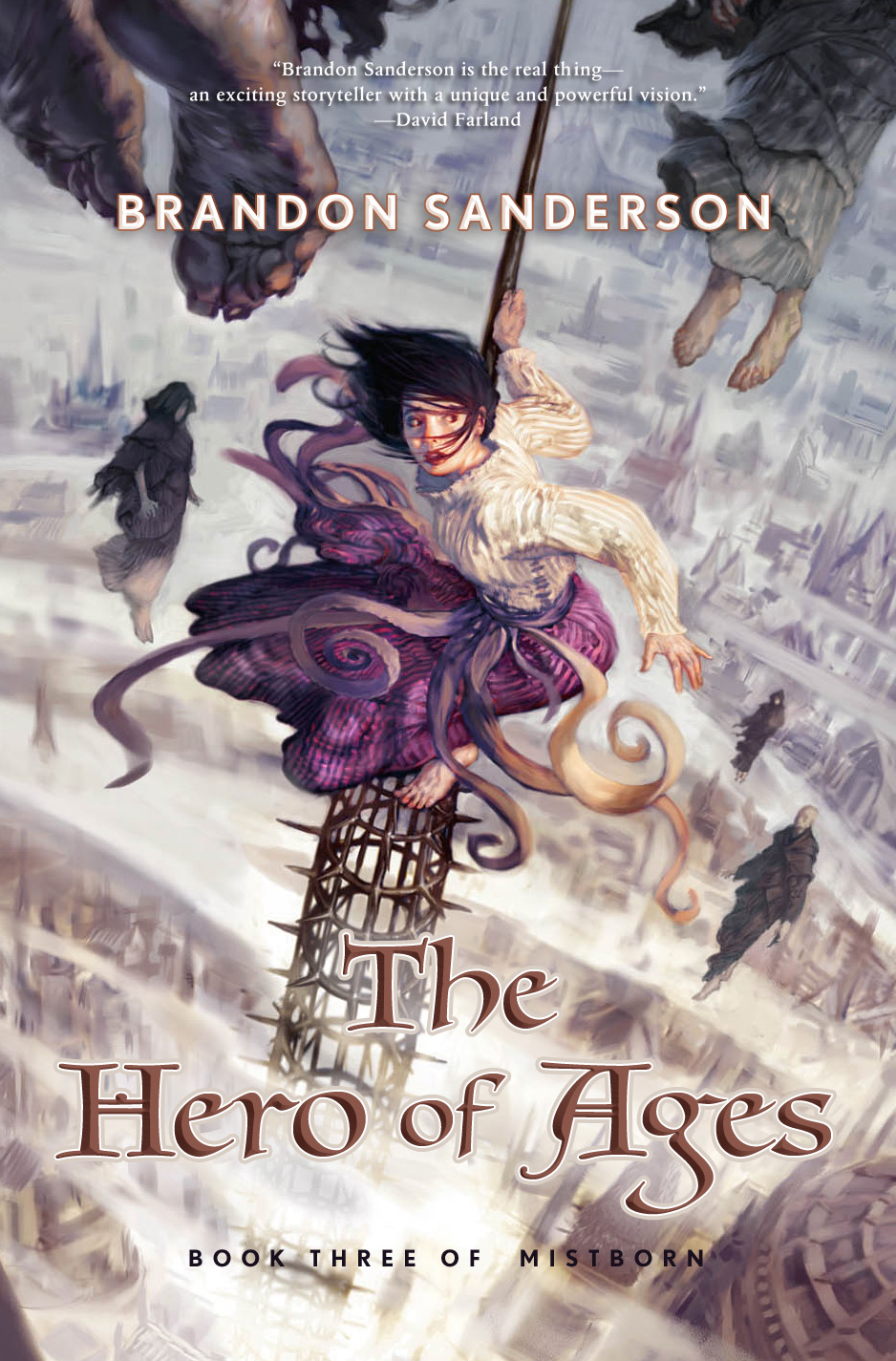 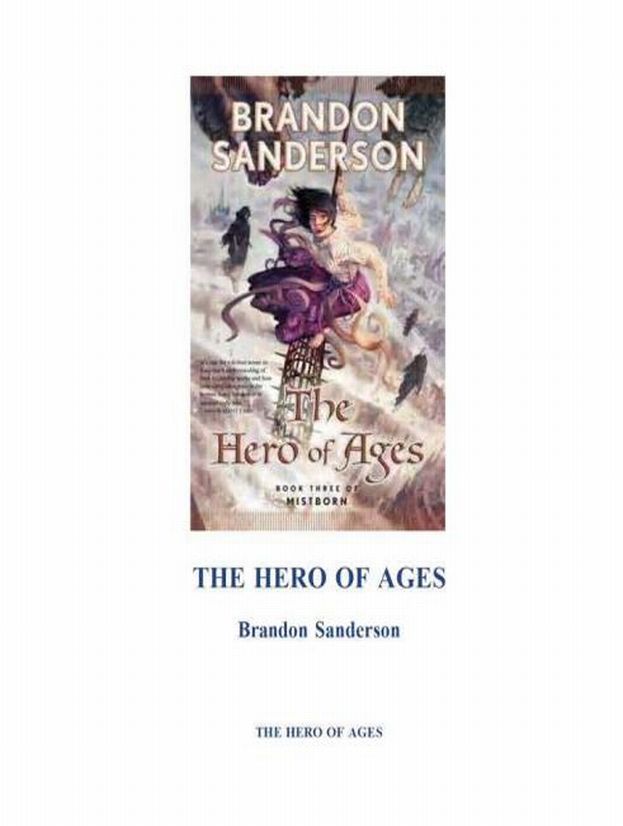 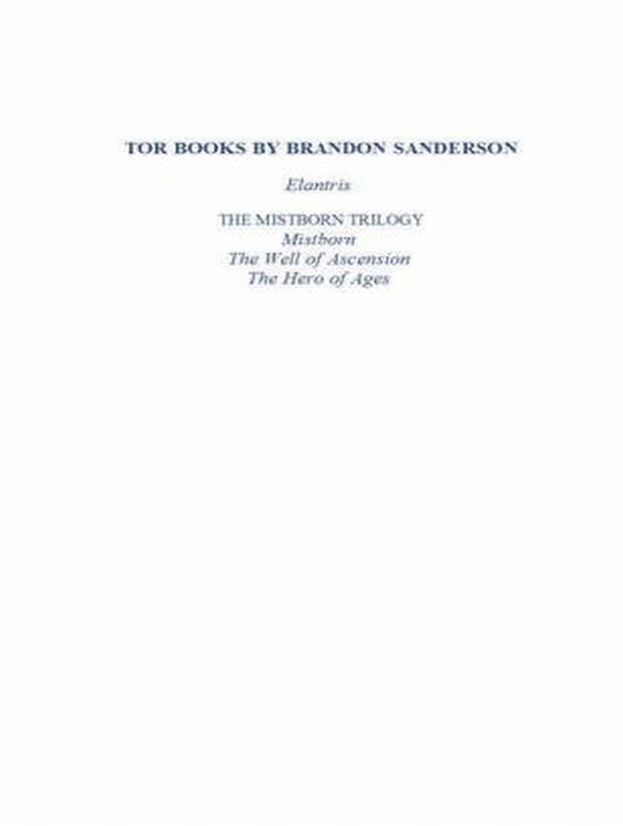 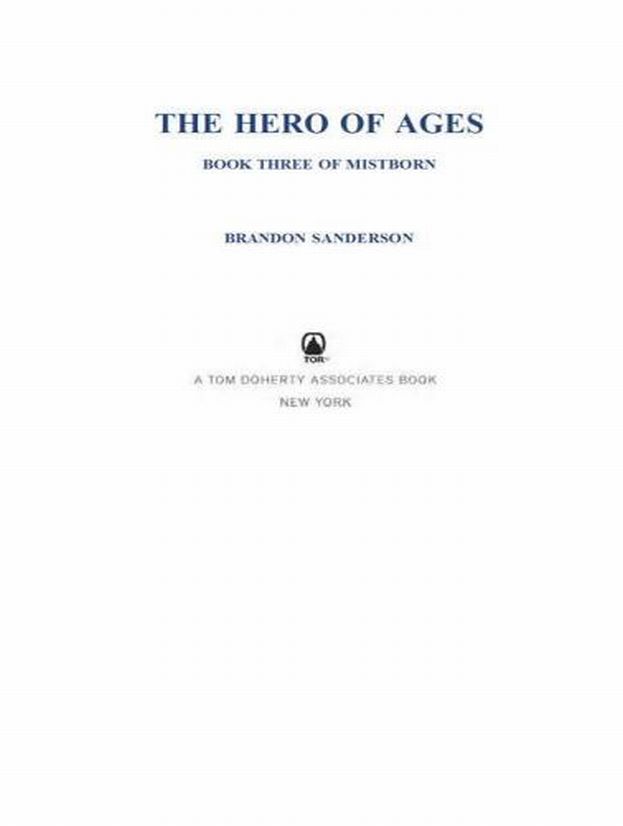 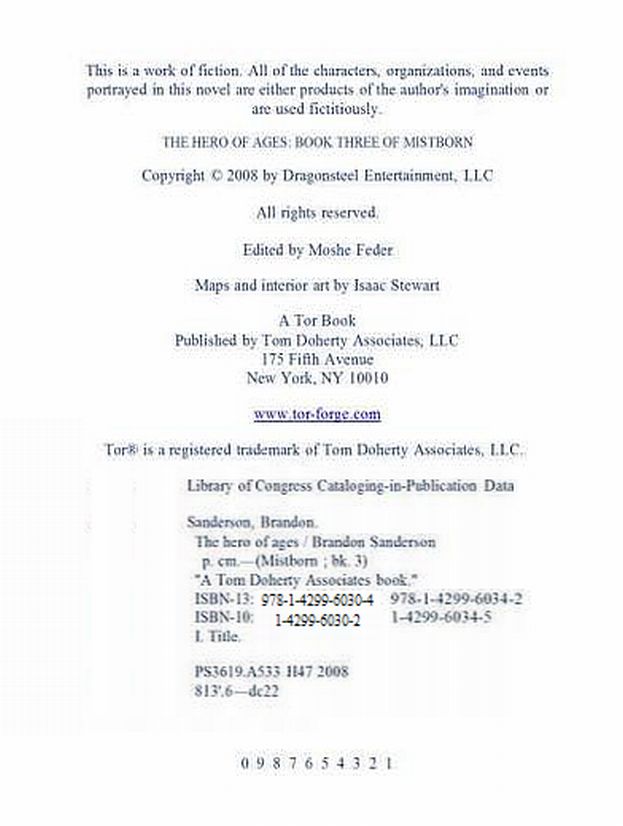 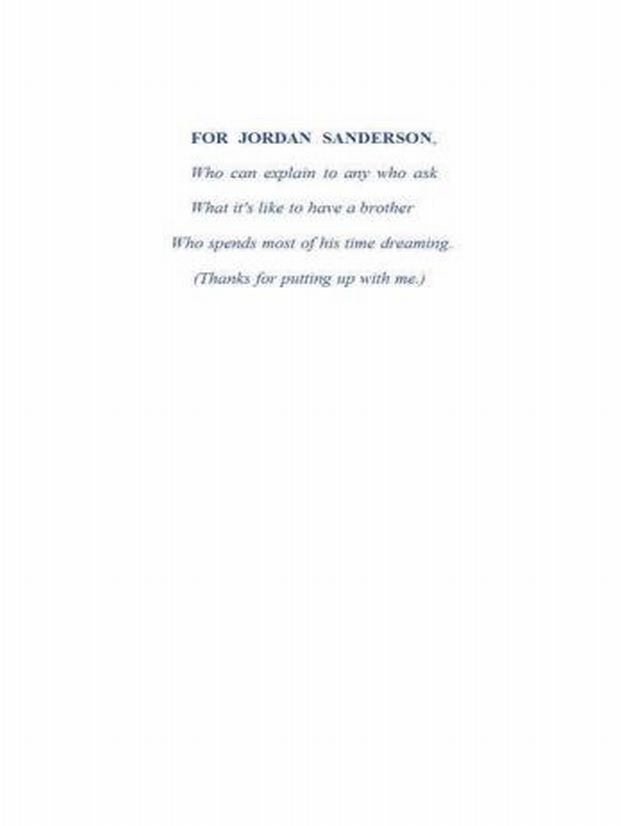 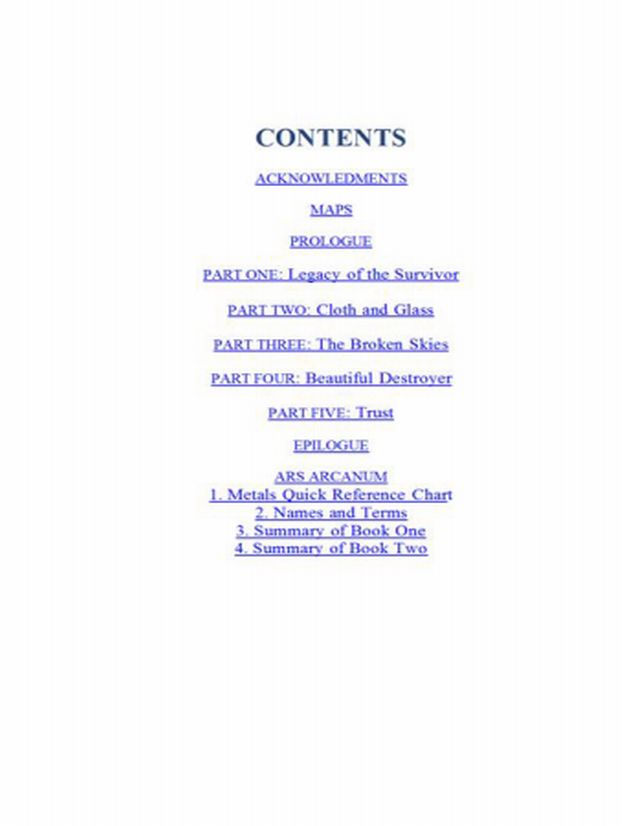 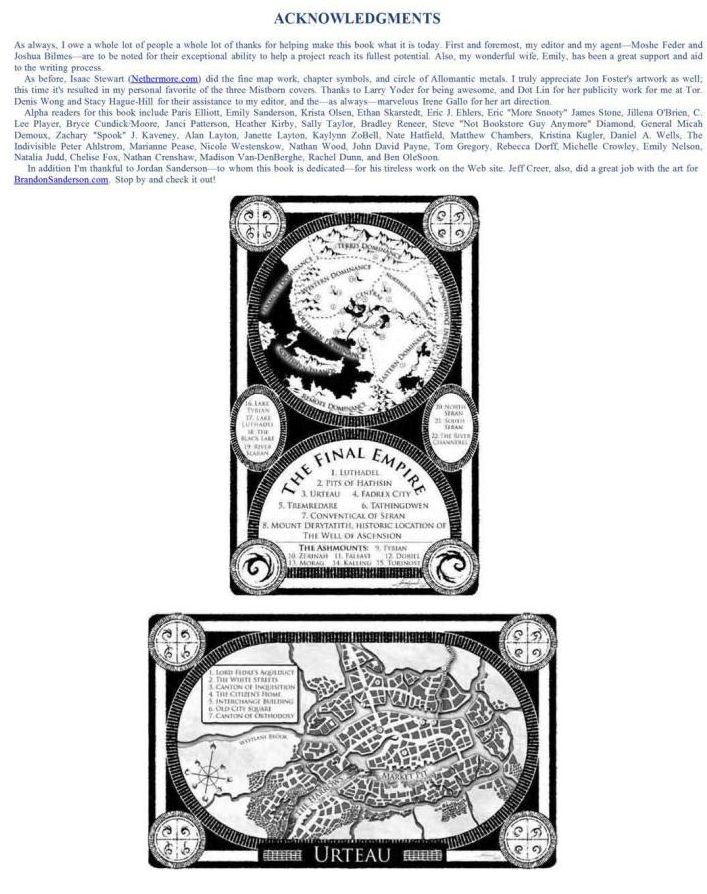 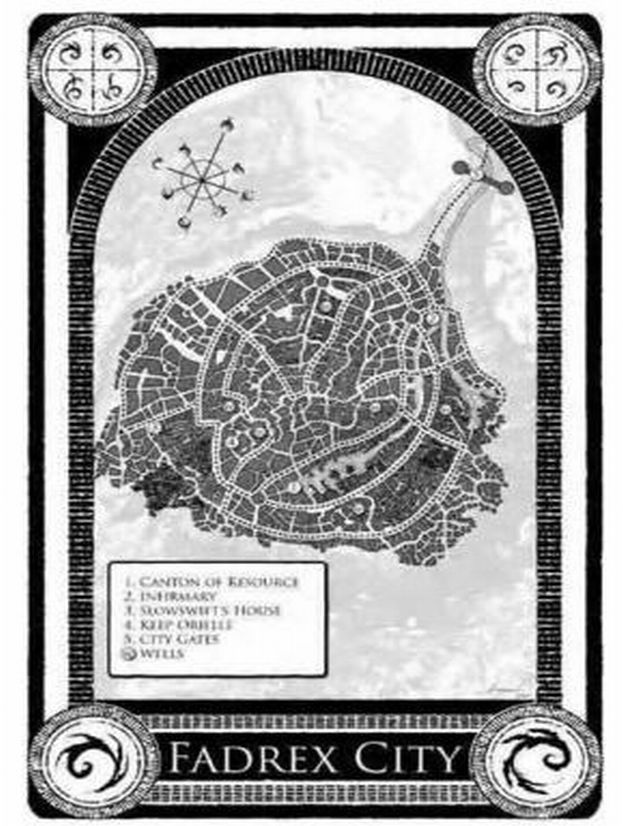 MARSH STRUGGLED TO KILL HIMSELF
.

His hand trembled as he tried to summon the strength to make himself reach up and pull the spike f ree from his back and end his monstrous life. He had given up on trying to break free. Three years. Three years as an Inquisitor, three years imprisoned in his own thoughts. Those years had proven that there was no escape. Even now, his mind clouded.

And then It took control. The world seemed to vibrate around him; then suddenly he could see clearly. Why had he struggled? Why had he worried? All was as it should be.

He stepped forward. Though he could no longer see as normal men did af ter all, he had large steel spikes driven point-first through his eyes he could sense the room around him. The spikes protruded from the back of his skull; if he reached up to touch the back of his head, he could feel the sharp points. There was no blood. The spikes gave him power. Everything was outlined in f ine blue Allomantic lines, highlighting the world. The room was of modest size, and several companions also outlined in blue, the Allomantic lines pointing at the metals contained in their very blood stood with Marsh. Each one had spikes through his eyes. Each one, that is, except for the man tied to the table in front of him. Marsh smiled, taking a spike off of the table beside him, then hef ting it. His prisoner wore no gag. That would have stopped the screams.

"Please," the prisoner whispered, trembling. Even a Terrisman steward would break down when confronted by his own violent death. The man struggled weakly. He was in a very awkward position, as he had been tied to the table on top of another person. The table had been designed that way, with depressions to allow for the body underneath.

"What is it you want?" the Terrisman asked. "I can tell you no more about the Synod!" Marsh fingered the brass spike, f eeling its tip. There was work to do, but he hesitated, relishing the pain and terror in the man's voice. Hesitated so that he could . . . Marsh grabbed control of his own mind. The room's scents lost their sweetness, and instead reeked with the stench of blood and death. His joy turned to horror. His prisoner was a Keeper of Terris a man who had worked his entire lif e for the good of others. Killing him would be not only a crime, but a tragedy. Marsh tried to take command, tried to force his arm up and around to grab the linchpin spike from his back its removal would kill him.

Yet, It was too strong. The force. Somehow, it had control over Marsh and it needed him and the other Inquisitors to be its hands. It was free Marsh could still feel it exulting in that but something kept it from af fecting the world too much by itself. An opposition. A force that lay over the land like a shield. It was not yet complete. It needed more. Something else . . . something hidden. And Marsh would find that something, bring it to his master. The master that Vin had freed. The entity that had been imprisoned within the Well of Ascension.

It called itself Ruin.

Marsh smiled as his prisoner began to cry; then he stepped forward, raising the spike in his hand. He placed it against the whimpering man's chest. The spike would need to pierce the man's body, passing through the heart, then be driven into the body of the Inquisitor tied below. Hemalurgy was a messy art. That was why it was so much fun. Marsh picked up a mallet and began to pound.

PART ONE LEGACY OF THE SURVIVOR
.

I am, unfortunatel y, the Hero of Ages
.

FATREN SQUINTED UP AT THE RED SUN
, which hid behind its perpetual screen of dark haze. Black ash fell lightly from the sky, as it did most days lately. The thick f lakes f ell straight, the air stagnant and hot, without even a hint of a breeze to lighten Fatren's mood. He sighed, leaning back against the earthen bulwark, looking over Vetitan. His town.

Druffel scratched his nose. His f ace was stained black with ash. He hadn't given much thought to hygiene lately. Of course, cons idering the stress of the last few months, Fatren knew that he himse lf wasn't much to look at either.

"An hour, maybe," Druff el said, spitting into the dirt of the bulwark. Fatren sighed, staring up at the falling ash. "Do you think it's true, Druff el? What people are saying?"

"What?" Druffel asked. "That the world is ending?"

Druffel shrugged, scratching himself. " S oon as those koloss arrive, I'll be dead. That's pretty much the end of the world for me."

Fatren fell silent. He didn't like to voice his doubts; he was supposed to be the strong one. When the lords had left the town a farming community, slightly more urban than a northern plantation Fatren had been the one who had convinced the skaa to go ahead with their planting. Fatren had been the one to keep the press gangs away. In a time when most villages and plantations had lost every able-bodied man to one army or another, Vetitan still had a working population. It had cost much of their crops in bribes, but Fatren had kept the people safe.

"The mists didn't leave until noon today," Fatren said quietly. "They're staying later and later. You've seen the crops, Druff. They're not doing well not enough sunlight, I'd guess . We won't have food to eat this winter."