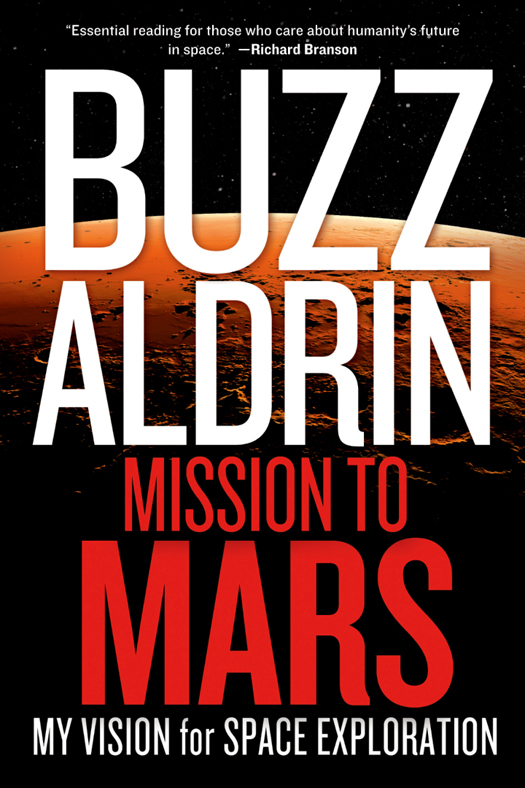 FOR CHILDREN
Reaching for the Moon
Look to the Stars

Copyright © 2013 Buzz Aldrin Enterprises, LLC. All rights reserved. Reproduction of the whole or any part of the contents without written permission from the publisher is prohibited.

This book represents a journey of its own. It began the moment my father set foot back on Earth. Since that time he has been constantly thinking about how people from Earth will inhabit another planet. What you will read is a vision of the extension of humanity to Mars, to be sure. But the strength of my father’s vision is the pathway as much as it is the planet. It is about the journey as much as the destination.

I was there for most of it. I remember some of it.

My earliest recollections are probably of me sitting around the kitchen table looking at these fantastic models of space planes, and understanding almost nothing about the space shuttle that was going to be the next generation of spacecraft intended to fly people into orbit. There was an impassioned discussion—well, more of a monologue—regarding early designs for a space shuttle system that had a piloted flyback booster for the first stage and why we needed to separate crew from cargo. That is about all I remember. I was 11 and had nothing to contribute, except for a willing ear.

And that is the way it went for the first 20 years or so of our conversations about space travel. I listened, and I learned, while my dad talked about space.

Some of these conversations involved the great thinkers of our time. When my dad came up with an idea, he would seek out the people who were doing the most creative thinking at the moment. They would usually pick up the phone when he called. At one point he began to look critically at the design of the space station. The structure just didn’t seem efficient. I recall that he became enamored with geodesic structures, so he naturally called on Buckminster Fuller. Now that was an amazing set of conversations. At the time it seemed like competing soliloquies. But I began to see many more of Bucky’s ideas creep into the design.

And it is not just the well known and famous who captured my father’s attention.

If anyone had an idea that fit in my dad’s vision of the future, he would go and talk to them. Often he became the tireless advocate for their ideas. He was building an architecture of systems. If someone had an element that fit in his structure, he wanted to use it.

You will see a lot of other people’s elements in the pages of this book. But the system, in the broadest sense possible, is truly his own.

All of the pieces fit together. That may be the real virtue of this book. There are hundreds, probably thousands, of people who have talked with my father, read his articles, heard his speeches, and watched him on TV. Each of them contributed a snippet to Dad’s overall vision. Sometimes the snippets seemed impossibly disjointed. There was just so much he was trying to articulate, and so little time in one conversation, speech, or interview.

But I recall one conversation with Brent Sherwood, a space architect now at the Jet Propulsion Laboratory, who really does see the big picture. My dad had an incomprehensibly complex diagram of how humans could get from where they were to Mars. Reasonably intelligent people could disagree over many of the points in the diagram. And they did. But afterward Brent told me that, despite his technical differences, “it all hangs together.” And he went on to say that Buzz may be the only person who has all of the pieces to the puzzle.

This book is the first time my father has attempted to put the entire puzzle together in one place.

My dad has spent a great deal of time conversing about space with many people. This book is a continuation of that tradition. The basis of these chapters began with the 40 years of publications, interviews, and presentations my dad has made. Many of these have been carefully collected by the people who work closely with my dad. A special mention should be made of the work Christina Korp and Rob Varnas have done in collecting and organizing the considerable library of my father’s works.

But the real heart of this book is a series of conversations between my dad, Leonard David, and me over the better part of 2012, all dedicated to the writing of this book. These conversations have been wide ranging, incredibly insightful, entertaining, frustrating, enlightening, and hopelessly disorganized. It is a testament to Leonard’s perseverance that he has been able to organize the discussions into an entirely coherent manuscript which, I believe, offers the clearest, most comprehensive account of my father’s views on spaceflight.

The book begins with a brief account of my father’s flight on Air Force One on the day that U.S. President Barack Obama made his only major speech on space. My dad was more than just a passenger that day. For the past year he had been working tirelessly, refining concepts for space exploration programs, making speeches on space exploration, testifying before space commissions and Congress. My proudest moment was watching his speech at the Smithsonian’s National Air and Space Museum on the 40th anniversary of the moon landing. That speech laid out succinctly his vision for the future of human space development and exploration.

This book serves to further that vision.

Space exploration has never been a purely technical enterprise for my father. While the lessons of Apollo are legion, none has made a greater impression on him than the power of the commitment of an American President. John F. Kennedy’s speech declaring a clear and compelling goal for space exploration forever changed the course of human history. So, in any conversation with him about the long-term future of human exploration, you will inevitably find yourself discussing space in terms of four-year electoral cycles. Much as you must have a progression of technical development, my father recognizes that there must be a progression of political decisions, supported by sound policy analyses.

Bloodmoney by David Ignatius
Elevation of the Marked (The Marked Series Book 2) by March McCarron
Walker Pride by Bernadette Marie
One Wedding Night... by Shirley Rogers
Because We Belong: A Because You Are Mine Novel by Kery, Beth
Rhythm by Ena
Summer of the Beast by Trinity Blacio
The Silver Linings Playbook by Matthew Quick
Banished: Surviving My Years in the Westboro Baptist Church by Lisa Pulitzer, Lauren Drain
Three to Conquer by Eric Frank Russell