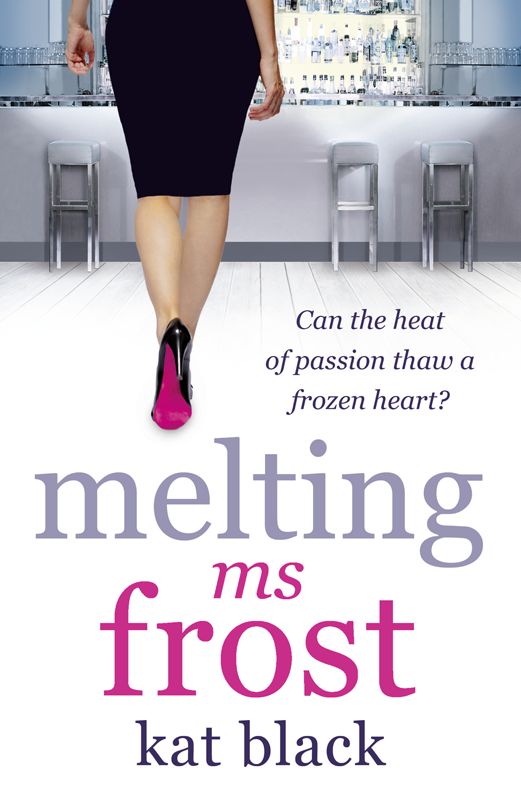 Writing this book has been quite a journey, one that would never have started without my editor at Mischief Books, the talented and tireless Adam Nevill, who not only approached me with an amazing opportunity, but who also had faith that I could rise to the challenge. I’m hugely appreciative for his encouragement and support. Without him
Melting Ms Frost
would not exist. I’d like to also express my gratitude to the team at Avon for making that ‘amazing opportunity’ available, and for getting me through the experience (relatively) unscathed.

There are various kind and patient people from the Vienna Tourist Office to thank for their advice on their beautiful city. Likewise, the generous help provided on the Irish Gaelic language by Oideas Gael in County Donegal. Any mistakes/bending of facts/stretching of truths are my own.

As writing is such a solitary business, it’s all too easy to get lost in your own words and end up where you don’t want to be. I’m therefore indebted to three fabulous and well respected book bloggers who agreed to take time out of their busy reading and reviewing schedules to cast their critical eyes over my first draft scribblings. Mandi Schreiner at Smexy Books, Nix at Scorching Book Reviews, and Jennifer Porter at Romance Novel News – thank you all for your constructive views which helped get these characters knocked into shape. They’re much better for it.

Lastly, to my neglected family and friends – who’ve been at risk of forgetting what I look like during my absence of the past year. You’ll probably never know just how much your patience and unflagging belief has meant to me during this process. Heartfelt thanks and love to you all. I look forward to spending some time together before I disappear back down into the word mines to begin chiselling out the sequel!

For Rob, Ellie and Lottie with all my love.
Anything is possible.

‘Let’s get to work then,’ the redhead in the razor-cut skirt suit snapped, pivoting on her heel to bring an end to the pre-dinner staff meeting. Without so much as a glance to the left or right, she marched off towards the kitchens and the office space beyond, leaving the click of her strides to cut through the silence blanketing the restaurant dining room in her wake.

From where he leant back against the glossy expanse of the lacquered cherry wood bar, arms folded over his chest and one ankle crossed in front of the other, Aidan Flynn kept his features schooled and gave her retreating form an appraising once-over. Starting at the tightly rolled twist of her hair, he ran his gaze past the rigid set of her shoulders to the purposeful swing of her hips – then followed the long line of her legs all the way down to the soles of her spiked black stilettos before releasing a slow whistle under his breath.

So. That was the woman he’d been hearing so much about. Café Cluny’s general manager, Ms Annabel Frost. His immediate boss.

Beginning the visual ascent back up over her tailored curves, he had to admit that as far as first impressions went, she made a hell of an impact. Not least because she actually seemed to live up to every word of warning he’d received from his colleagues during the week he’d been on the job. There’d been so many horror stories, so gleefully imparted, that he’d taken a lot of what he’d heard with a good-humoured pinch of salt, suspecting the truth had been embellished as part of some joke to wind up the new boy.

But having just seen the alleged villain of those tales in action for himself, he had to assume that most of the gossip was, in fact, true. Despite having never met him before, she’d treated him with the same cool indifference she had the rest of the staff, singling him out only when he’d spoken up to make a point of introducing himself – and only for the shortest and sharpest of exchanges. Even fresh back from a week’s leave, the only chilled vibe Ms Frost was giving off was an eyebrow-icing arctic blast.

She was stunning too, no question. That striking ruby-red dye job and matching lipstick lent her a vibrant air severely at odds with the glacial personality that characterised her name to a T. It had been a good thing she’d demanded the room’s undivided attention when she’d swept in a short time earlier, as he doubted he’d have been able to drag his fascinated gaze away from her even if he’d wanted to. From what he’d been admiring of her alabaster complexion and green eyes, he’d bet his boots there was a natural redhead lurking beneath all that cosmetically manufactured armour – because armour was exactly what that polished and prickly exterior represented, he had no doubt. There was more to Annabel Frost than met the casual eye, and just what it was she was trying to hide behind that tough outer shell had him intrigued.

It wasn’t until the kitchen door swung closed behind her, the sight prompting a collective sigh of relief to hiss around him like so many punctured tyres, that his attention was pulled from its internal reverie and back into the midst of the loosely gathered group of his colleagues.

‘The Bitch is back,’ one of the commis chefs muttered as the starched white huddle of kitchen staff broke away and started towards their shiny steel domain without any of the irreverent banter Aidan had grown accustomed to hearing from them over the past week.

The rest of the staff began dispersing to complete their interrupted preparations for a busy service. Amid the subdued, grumbling shuffle, Tim, the fair-haired head waiter who’d taken a far more amiable approach to the role of acting manager in Annabel Frost’s absence, stopped by the bar and clapped a palm on Aidan’s shoulder. ‘Sorry to have to say I told you so, mate,’ he commiserated privately in his chummy, Australian twang.

Before Aidan had a chance to answer, sweet-natured Donna was there as well, using the guise of friendly concern to lay a hand on his forearm just below the turn-up of his white shirt sleeves, the touch to his bare flesh as suggestive as it was shy. ‘She had no right to treat you that way, Aidan.’ She gazed up at him prettily, eyes shining with empathy and open infatuation. ‘You mustn’t let her get you down.’

‘Not a problem,’ he assured her with a flash of a smile, straightening and using the excuse of heading back behind the bar to break the contact without hurting her feelings. The little waitress had been signalling her interest from the outset but, as keen and lovely as she seemed to be, her gentle femininity did nothing for him.

Taking up his station beside Jon, Cluny’s junior barman, he wondered what Donna’s delicate sensibilities would make of the fact that, far from getting him down, the arbitrary tongue lashing he’d just received from his new boss left him not only up, but very nearly hard, too, within the confines of his uniform black trousers?

In all honesty, he had to wonder at the visceral response himself. Self-restraint and control had always been his trademarks where the opposite sex was concerned – even towards its most eager members. Why he’d react so instantly to a woman who appeared to be so unaccommodating, so thoroughly unpleasant, was a mystery. After what he’d been through over the past few years, he would have thought he’d have had enough of impossible challenges, but apparently not. All his addled brain could seem to think about was what a pleasure it would be to drag the haughty Ms Frost off her high horse and teach her to enjoy kneeling, naked and obedient, at his feet.

Turning his attention to the task of slicing lemons for the night ahead, he ducked his head and let the fall of his unruly hair curtain a slower, altogether darker, kind of smile.

And if she insisted on kicking and screaming against him every inch of the way as he was certain she would?

From her front-of-house position behind the lectern-style reception desk, Annabel took one of her regular moments to sweep a gaze over the packed restaurant, checking that everything in her world was running as it should – staff busy but attentive, service efficient, customers content.

With its reputation for being classy but never stuffy, Cluny’s was popular all year round, and tonight, against the backdrop of opulent festive finery, the ambience was even more sparkling than usual. In addition to the artfully dimmed lighting, the twinkle of hundreds of tiny white fairy lights helped cast a magical glow over polished wood and snowy linen, while the spice-scented tealights flickering at the centre of each table bounced reflections off gleaming glassware and lent an attractive golden hue to the animated faces of the diners. The atmospheric background strains of easy jazz were overlaid by the lively buzz of chatter, and punctuated by the chink of cutlery against china. Mixed with the succulent aromas of rich seasonal dishes, the crisp scent of winter woods was conjured by the seven-foot gold and red decorated Christmas tree standing prominently in the window, and the garlands of berry-studded greenery hanging in deep swags from the cornicing. The look and mood were perfect: a blend of effortless sophistication and relaxed elegance that gave no hint of the exacting standards and obsessive attention to detail that were needed to achieve them.

Satisfied, Annabel ran her eye over the bar area opposite, only to find the new tousle-haired senior barman, the one who’d dared speak out of turn during the earlier staff meeting – Andy or Adam or something – looking back at her. It wasn’t the first time that evening she’d caught him staring, and it certainly wasn’t the first time she’d felt a spike of irritation in reaction to the cocky challenge in his look as he smiled, holding her gaze for a fraction too long.

Rather than encourage him by returning the smile, she let her lips purse. Handsome, vain and tripping on testosterone – she recognised the type only too well. It was hardly worth being surprised any more by the number of men who seemed to have no clue how to take female authority seriously; who thought it was okay to play up their manly attributes to bluff, bully or charm their way into blurring the line between the professional and the personal.

Well, she’d come across enough ‘charmers’ in her life not to be impressed by this one. As tall, dark and handsome as his particular attributes undeniably were, his allure wouldn’t work here. Not with her. Already beyond annoyed to have come back from a stressful week off to find that an emergency replacement for the previous head barman had been drafted in without her approval, she was in no mood to put up with any disrespectful crap.

Noting that the handful of stools at the front end of the bar were empty now that the last of the night’s bookings had been seated at their tables, she clipped the top back on her fountain pen and laid it down along the open spine of the reservations book. Smoothing the already flawless line of her pencil skirt, she stepped from behind the desk. Time to teach the pretty new boy his place.

The smile she directed at customers as she crossed the room dropped the second she entered the narrow area between the polished bar and the mirror-backed wall of shelves displaying an impressive array of bottles. By contrast, the smile from the man standing a few feet in front of her broadened in welcome, lighting up his handsome face and stopping her in her tracks.